They made a big impression on many of us as kids- tall vases in vibrant colors, oddly shaped ashtrays, and exotic-looking bottles and vases. The flame glass that was popular in the ’60s is still collectible today and the unique designs still fascinate us. Read on to find out more about one of our favorite vintage collectibles. 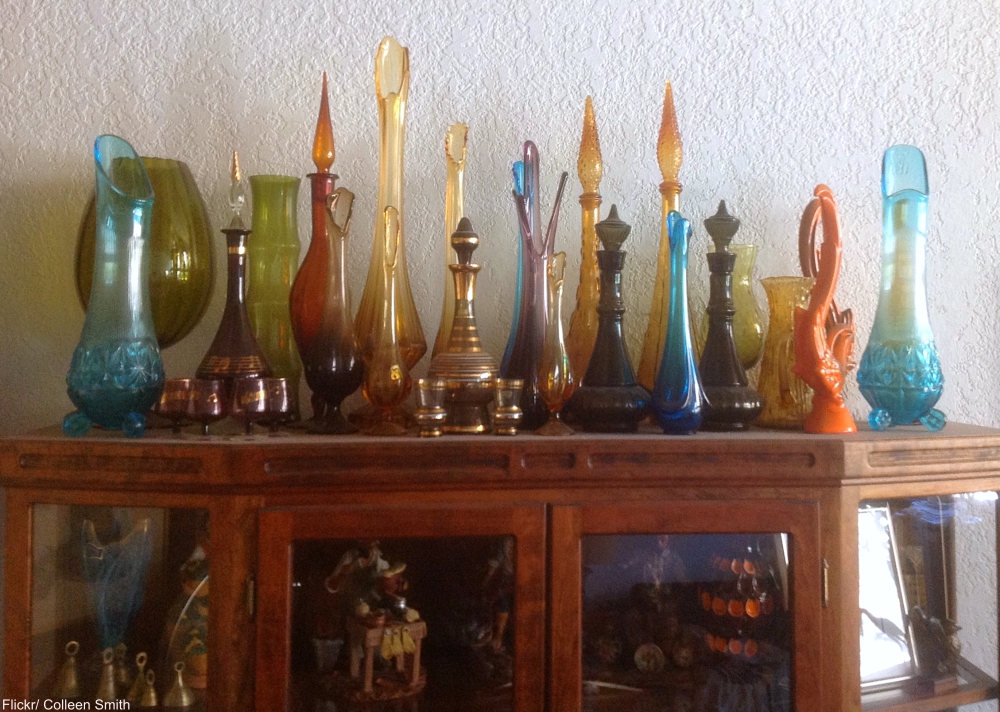 One of the most common names in the vintage market today is Viking, but a great many companies produced glass decor of every kind in the flame glass style. The pieces often blended multiple colors of glass together, with the most striking pieces in unusual shapes that came to points or were draped in elegant folds.

The Viking Epic line was in production from 1956-1975 and was intended to be a nod to the Swedish Modern style which was taking the world by storm. Blenko was another producer of flame and swung glass and their pieces tend to retain a high value over time. 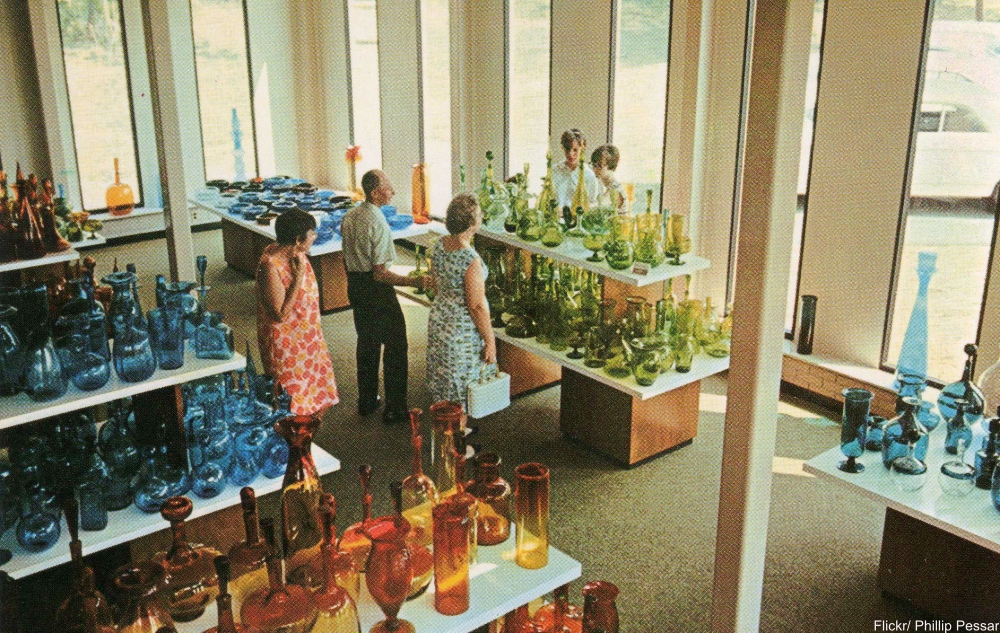 Vases, candy dishes, decanters, and all types of glassware were made in this style. The popular swung vases, some standing 2 or 3 feet tall, have the irregular edges that give the appearance of melting. The hot glass is literally swung and as it cools the edges come to the freeform shapes we admire so much. Swung vases were in production was early as the turn of the century, but became more flamboyant as consumers’ tastes changed. 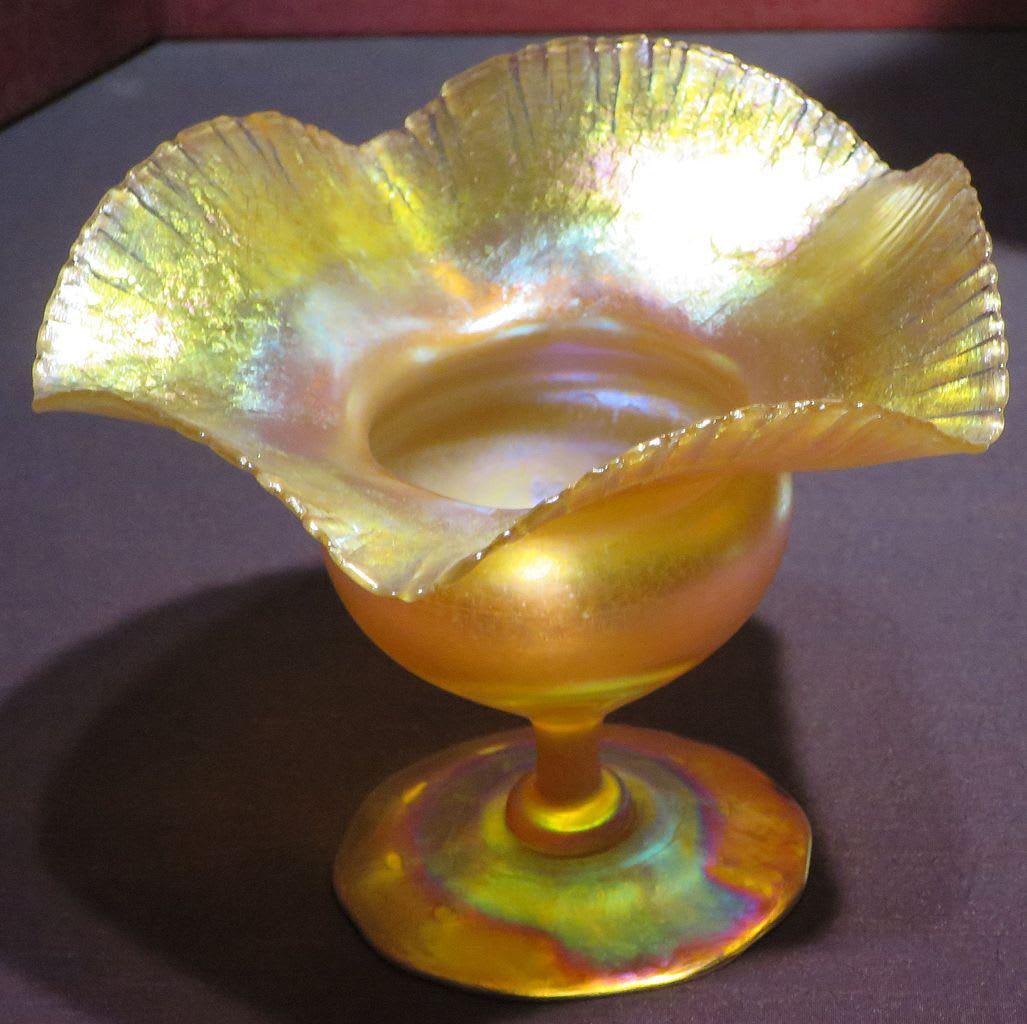 The style is an interpretation of art glass, a movement which began in the mid-1800s and which gained traction with makers like Lalique and Tiffany producing delicate designs which spoke to a gentler and more feminine era in decor.

Milk glass was hugely popular in the 1930-50s, but many glass companies like Westmoreland and Fenton (for which milk glass and hobnail had been staples) had to adjust to the times and began offering their own lines of flame and art glass style pieces. 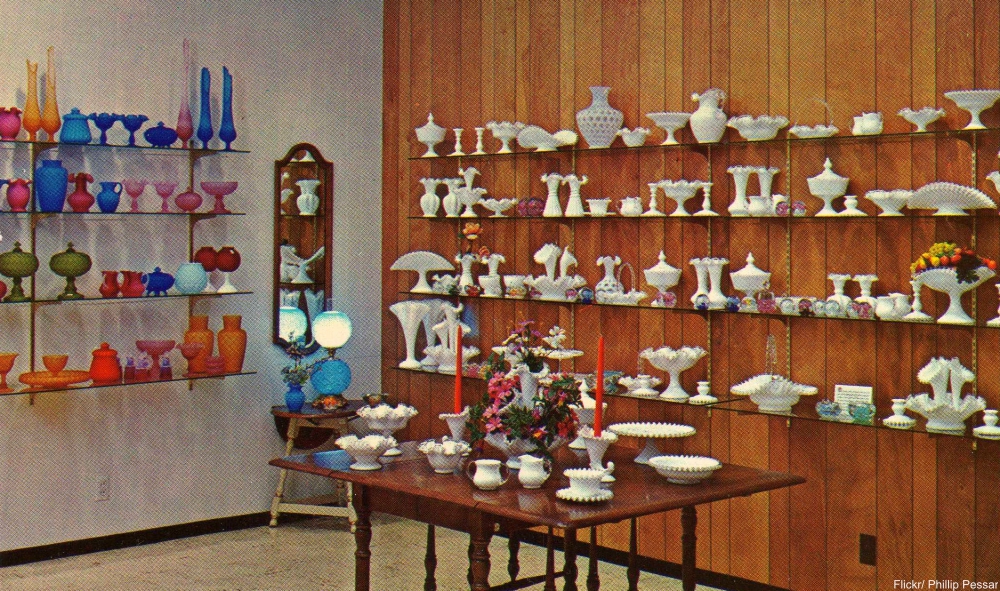 Flame glass from the ’60s and ’70s catered to a much more practical audience and the designs were comparably much more durable than their Edwardian counterparts. And many of the original pieces survive today due to their weight.

Though art glass is highly collectible, the prices can vary wildly, as you know if you’ve found them at flea markets for only a few dollars. Makers sometimes placed their stickers in awkward places meaning that they were usually instantly removed upon purchase. And with so many copycat companies cloning more famous designs it can be difficult to determine who the manufacturer was. But, their eye-catching design ensures that many flame glass pieces can easily sell in the $30-$100 range with rare pieces commanding even higher prices.