How the TV Dinner Was Born

Today we can stroll down the freezer aisle and find anything from burritos to frozen pie crusts to family-sized lasagna. But, this wasn’t always so. The first frozen foods came out in the 1930s, but at the time not everyone had a freezer at home. It wouldn’t be until the 1950s that the ubiquitous frozen dinner would hit grocery stores and forever change the way Americans ate. Here’s how the TV dinner was born. 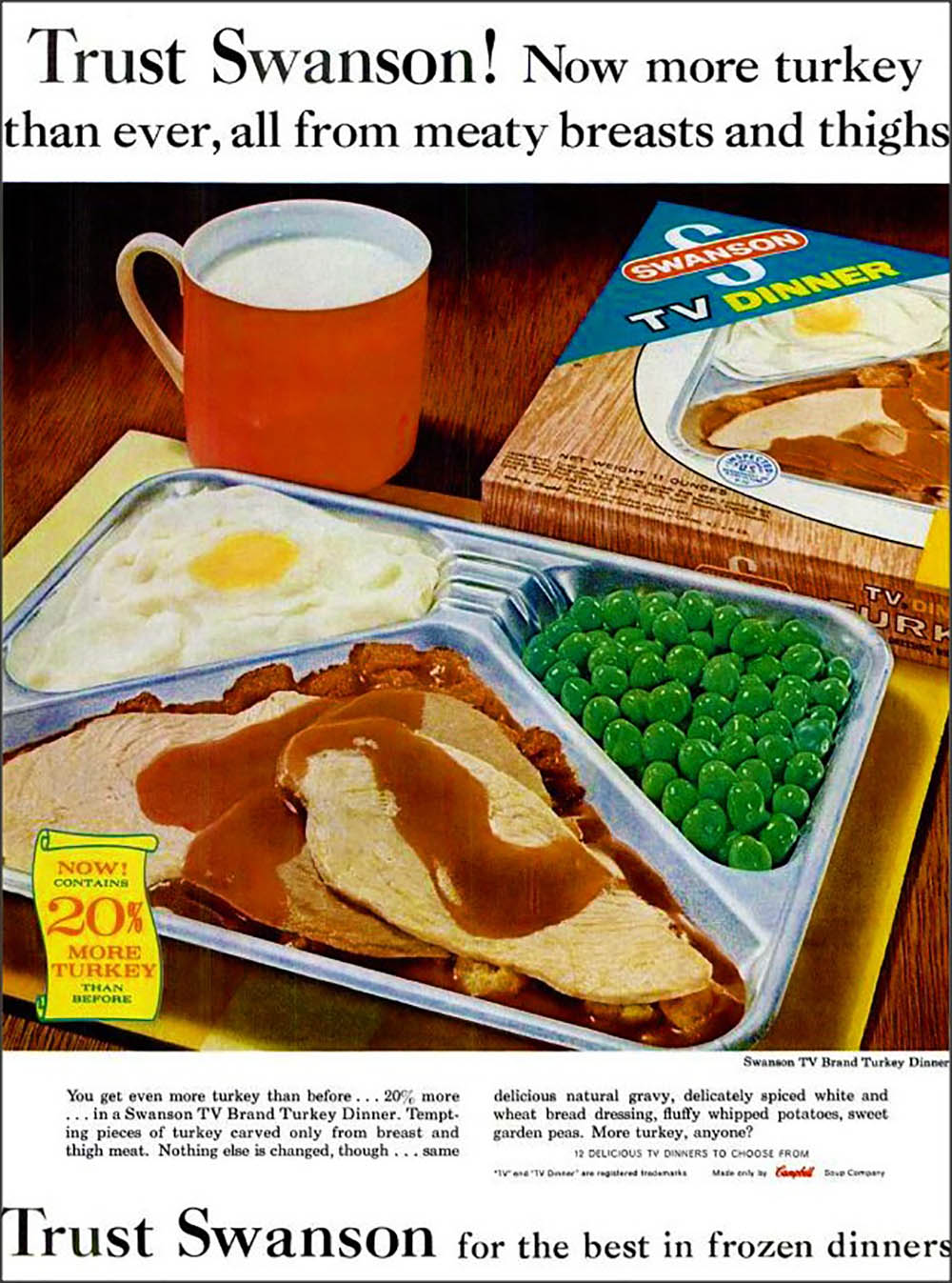 The Novelty of Frozen

The first company to make frozen foods was Birdseye, who figured out that by flash freezing foods, they retained more of the their original flavor and texture. This was useful in the case of say, frozen strawberries or peas, but hadn’t been applied to full dinners. And, frozen food at the time had a reputation for being soggy, limp, and tasteless. 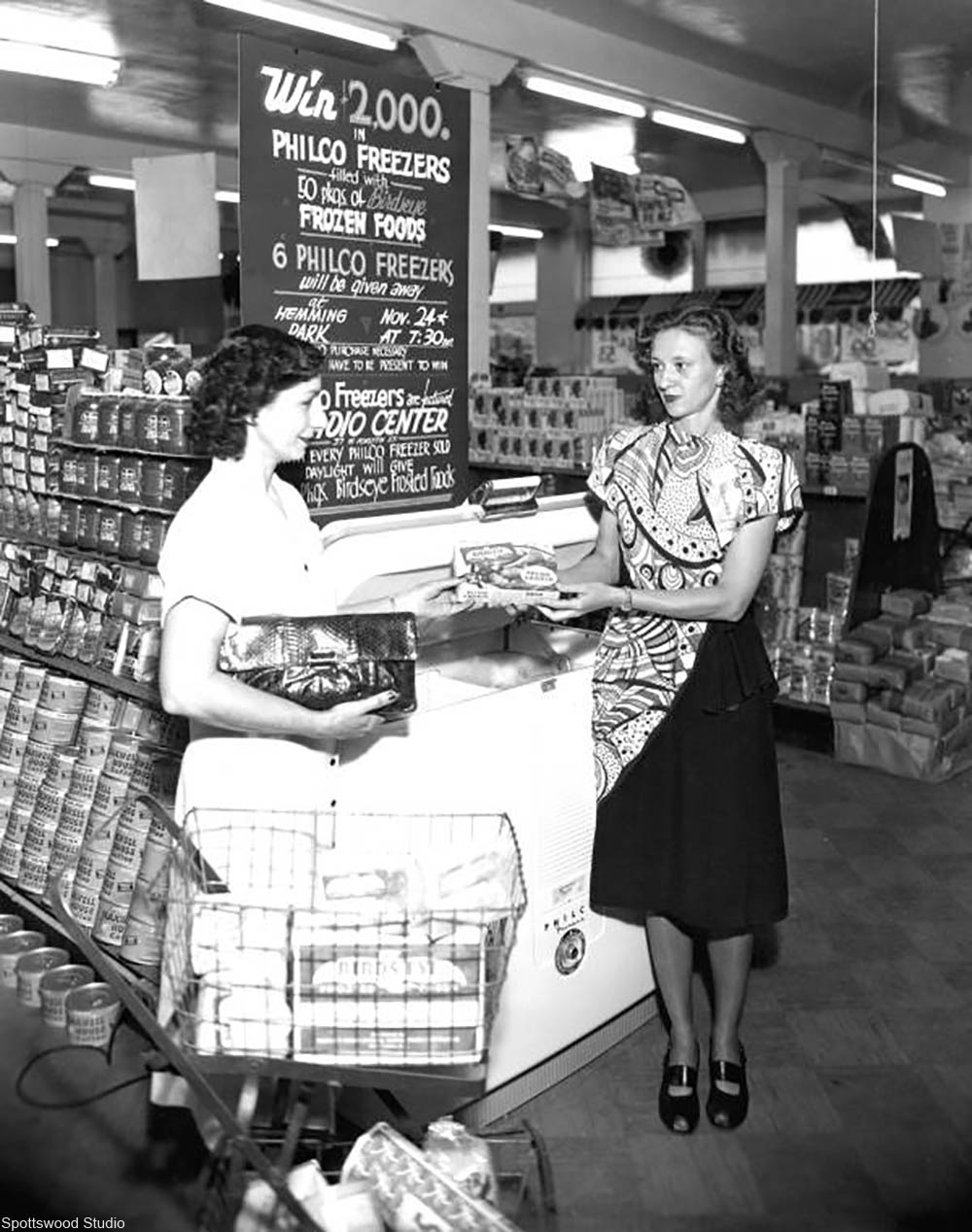 1948 frozen food promotion in a Florida grocery store. Via/ State Archives of Florida

The first frozen dinners, made in compartmentalized trays, were manufactured by W.L. Maxson Company in 1944 and were called “Strato-plates”. The concept was much like the blue plate special that had gained popularity in the 1930s, except it was frozen and disposable. They were first used for a limited number of airplane flights and military applications. The product was intended to be released to the public, however Mr. Maxson passed away in 1947 before that could happen and the project was abandoned.

Then one fall in the early 1950s, the Swanson Company found themselves with an expensive turkey problem: they had ordered too much for the upcoming Thanksgiving season. The 260 tons of turkey sat on refrigerated train cars being shipped back and forth across the U.S. while the company decided what, if anything, could be done to use up that much turkey meat.

The company was taking ideas from all sectors of the organization and the suggestions of salesman, Gerry Thomas, set up the product that would come to change the way Americans ate. Thomas’ idea for the project was to make frozen Thanksgiving dinners and to call them TV dinners- which played on the increasingly-common nightly ritual of gathering around the TV in the evenings. In the mid-1950s only about half of American households had TV, but the number was increasing every year.

The Culture of TV Dinners

It was pretty much the opposite of Julia Child, but eating in front of the TV proved to be an immensely pleasurable experience and one we are now heavily committed to in the U.S. In studies it is now believed to be more enjoyable than eating with one’s family! The rise in popularity of the TV tray table in the 1960s left no doubt as to how many families were having their dinners. For a large number of families, sitting around the table was no longer the evening ritual. 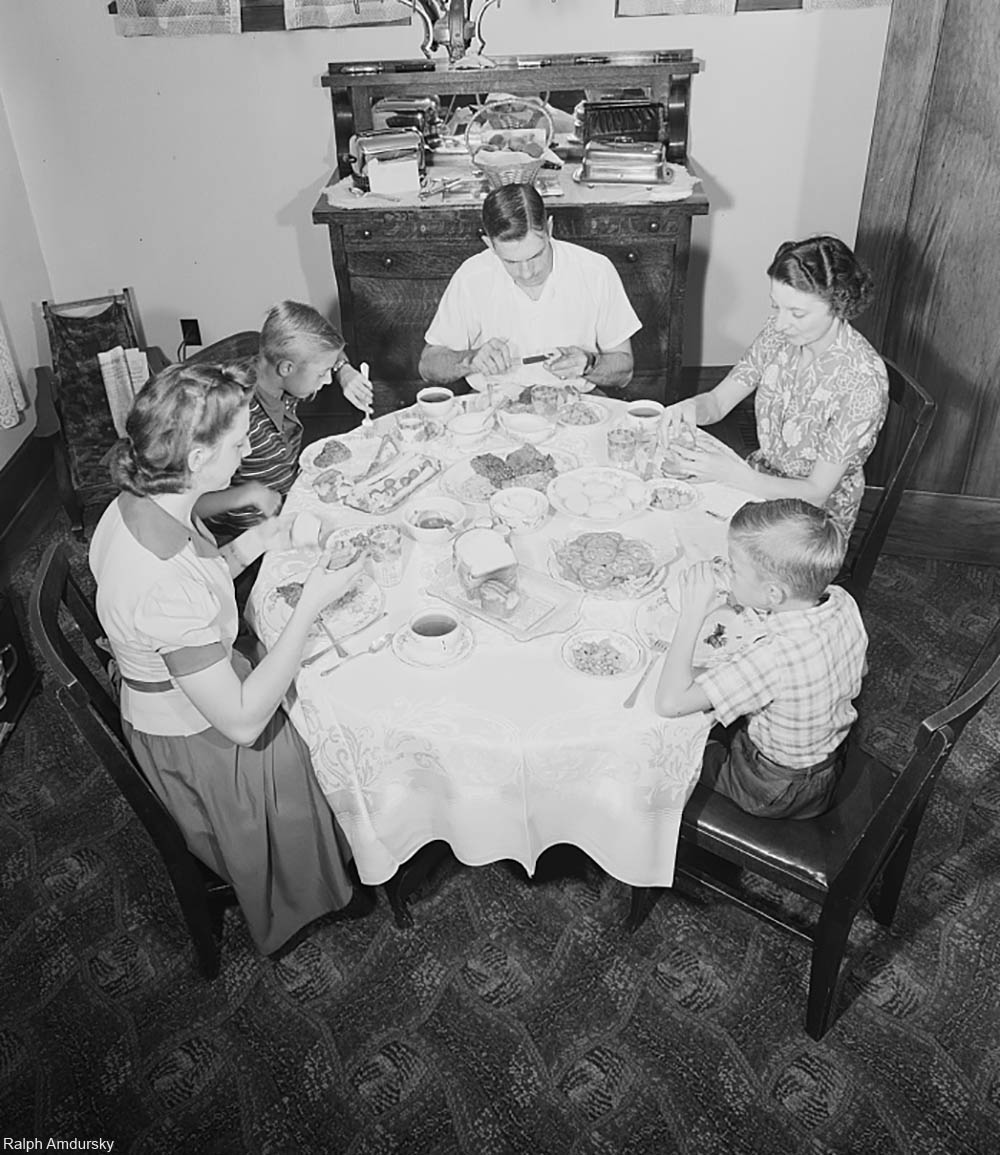 It turned out to be a huge success after being released in 1954 and looking back, many experts now believe that the nomenclature of the “TV dinner” is what helped them become so dang popular. The later addition of a dessert compartment was another innovation that made the meals seem like a viable replacement to homemade. Some have even argued that the rise in frozen meal options helped the cause of feminism by making paid work more feasible for time-strapped mothers.

By the 1970s, however, the name “TV dinner” was seen as a hindrance to a widening market that would soon contain plenty of both lunch and breakfast options, as well as the standard dinners. 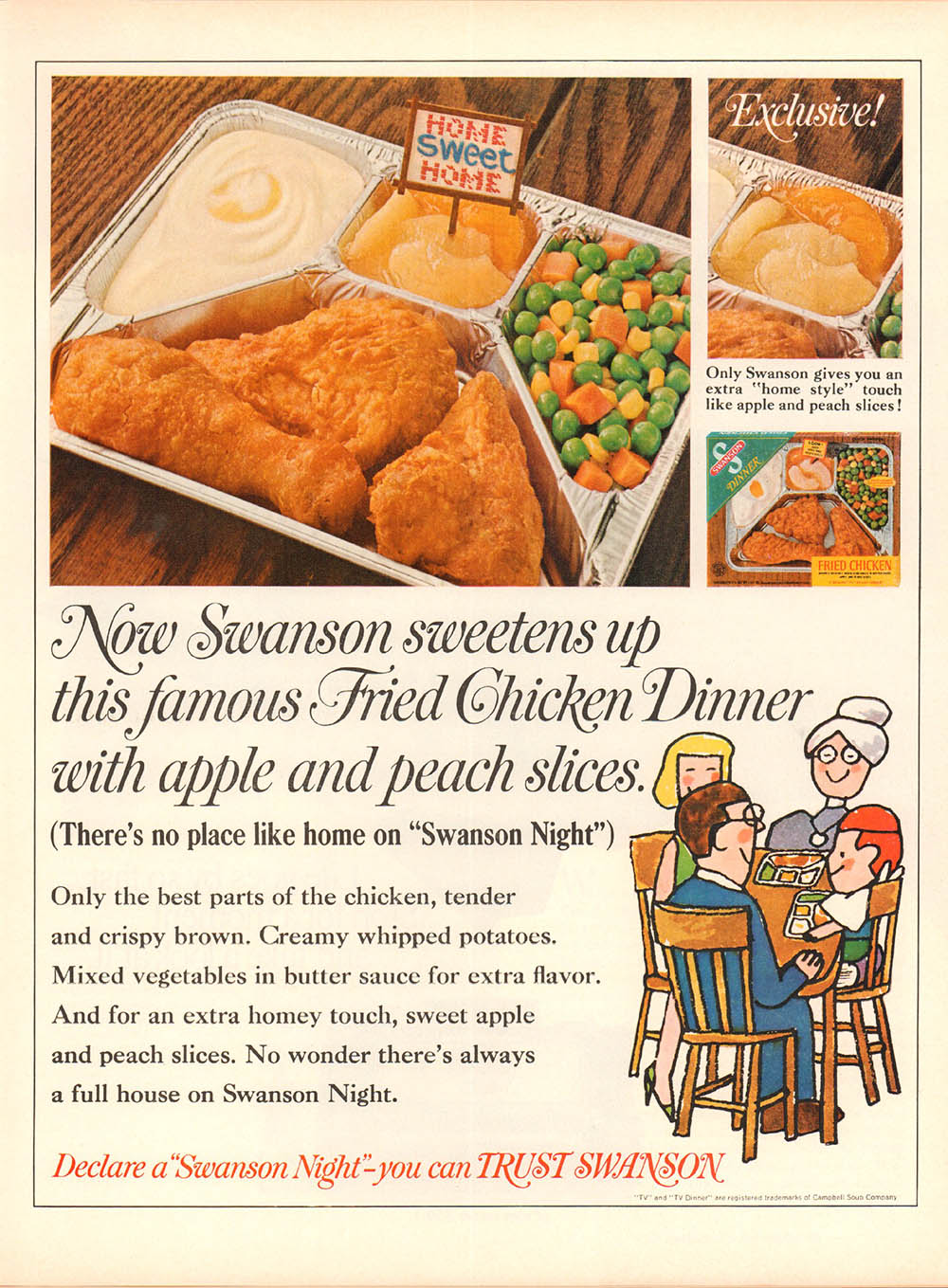 Frozen meals offered the chance to try new foods as the market for international meals- like German, Chinese, and Italian- was soon nearly as lucrative as the more traditional American meals. Then came the Hungry Man, which is the supersized version of the TV dinner. In the 1990s more healthy options were created, like vegetarian and low sodium frozen meals. 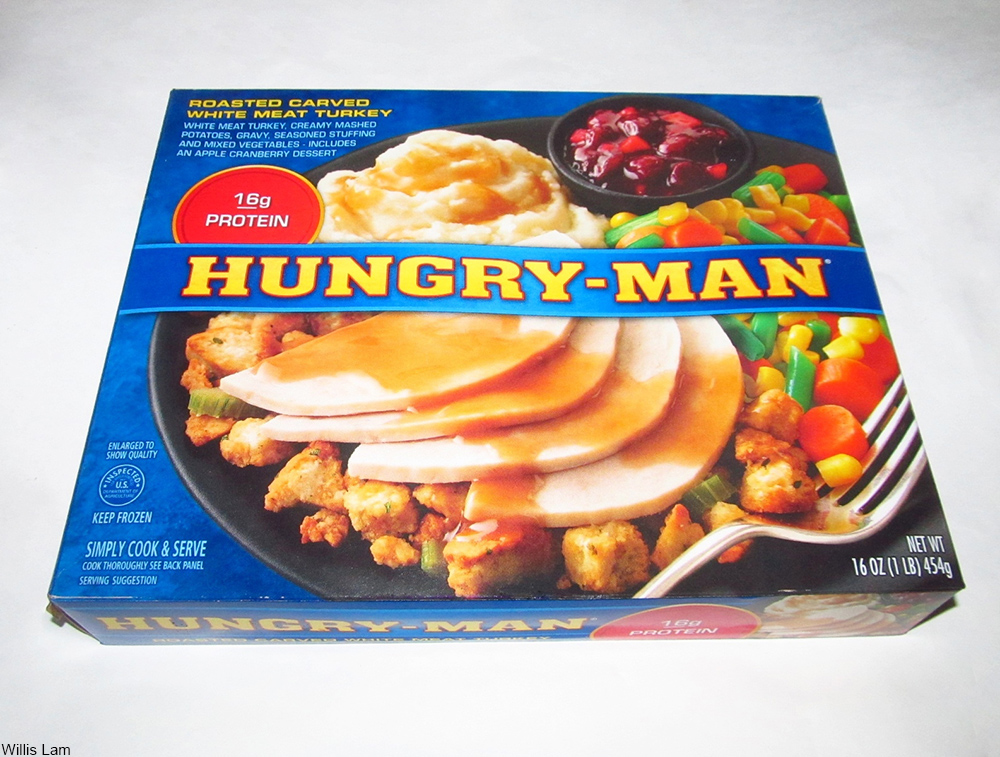 Despite concerns about how unhealthy most frozen meals are, they continue to be a popular grocery store item. For most people frozen meals cannot begin to complete with home cooked, but their convenience remains undisputed, especially with the prevalence of microwave ovens beginning in the 1980s.

And, just for reference, one reason why frozen meals are considered so unhealthy is because they contain higher levels of fat and sodium than might be found in a homemade meal. This is because some of the flavor and texture is lost in the freezing and reheating process and the extra salt and fat are intended to compensate for this.

There is some speculation as to what will happen to the frozen dinner as health-craze meals and indulgent restaurant foods both now compete with the frozen meal at dinnertime. However, there’s no denying that those iconic divided aluminum trays will forever symbolize the 1950s in a way that no other frozen food ever could.

Have a look at the history of the TV dinner in the fun video below.