The Great Depression May Have Helped This ’70s Character Become Wildly Popular!

You know her from countless quilts and embroidery patterns, and you know her from the many Holly Hobbie products in the ’70s. The sunbonnet can’t help but remind us of Laura Ingalls Wilder and the wide open prairie of the pioneer stories. But, where did this icon first get her start? The answer goes back further than you might think! 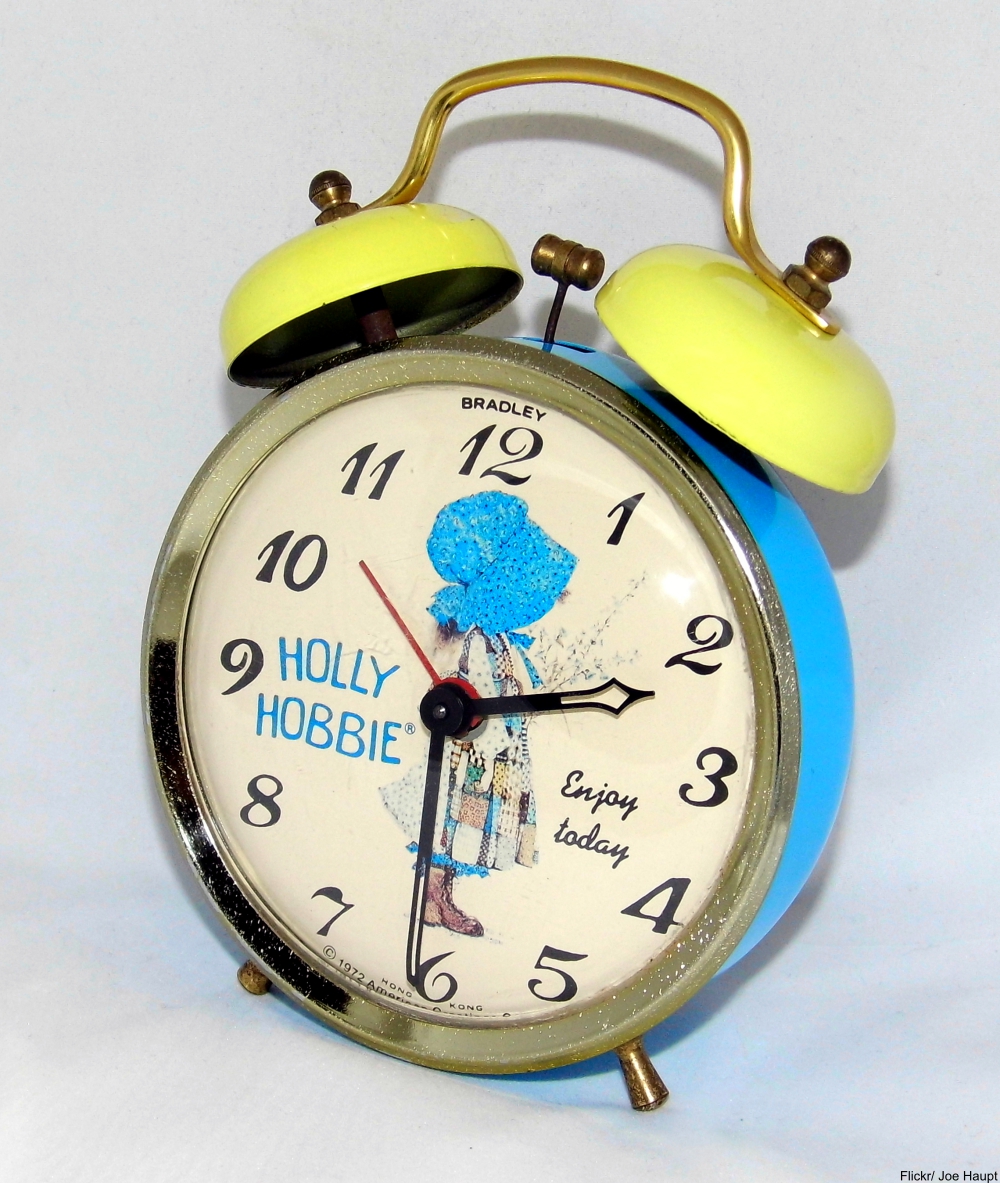 It started with an idealized vision of the American frontier. Nostalgia for pioneer days turned into a marketing craze between 1900-1940 when free quilting and embroidery patterns were included in many publications as incentives for women to buy the magazines and newspapers.

Suddenly, Sunbonnet Sue, with her recognizable oversized sunbonnet and pinafore prairie dress and apron, was making appearances on all manner of household items: quilts of course, but also dish towels, pillowcases and any other household item a woman might be sewing at home. Untold numbers of Sunbonnet Sue textiles were made during the Great Depression.

One theory about her popularity in the ’30s is that Sunbonnet Sue’s idyllic life spent picking flowers and swinging in the sunshine had a cheering effect on the many who struggled during the Depression, much like Shirley Temple films did. 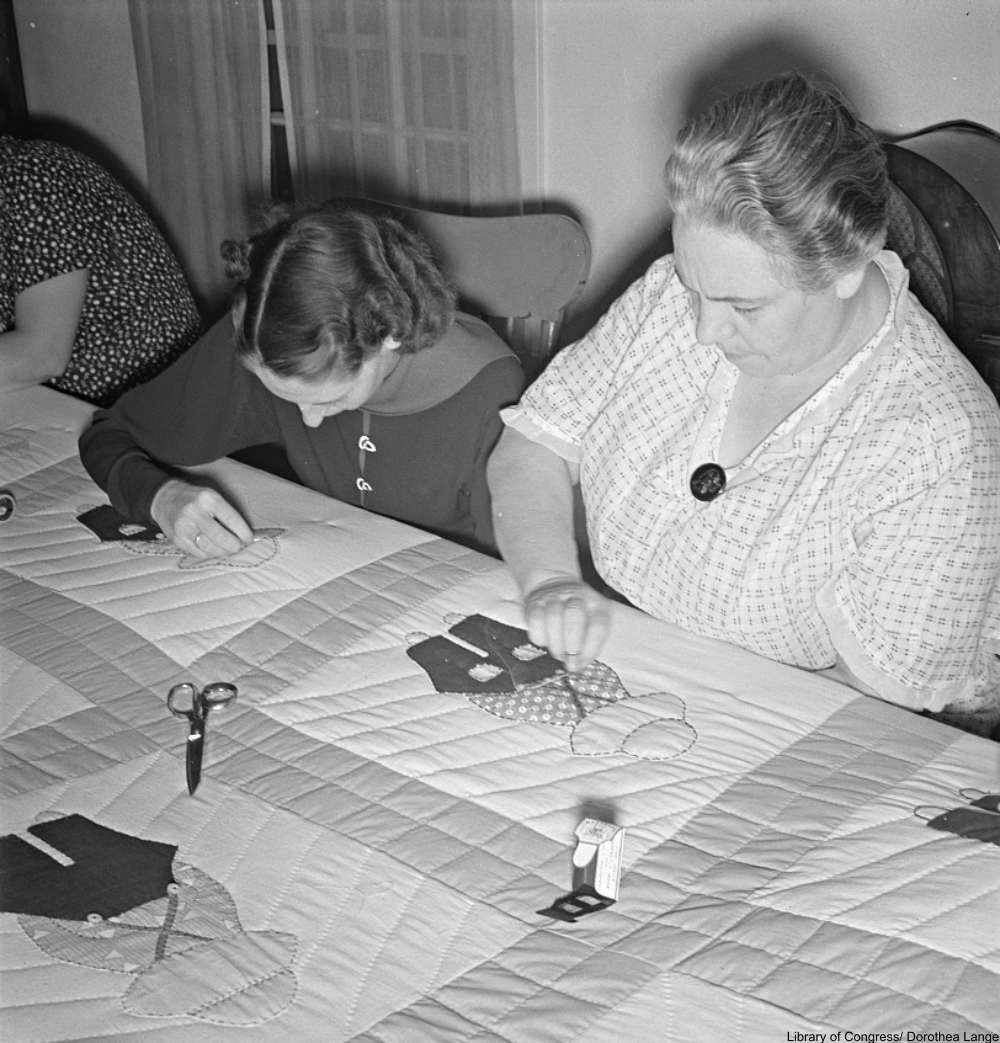 Sunbonnet Sue’s pioneer clothing meant that she was perfectly clad in the calico scraps our grandmothers used to piece together designs of her image. Patterns that could utilize scraps of fabric and embroidery floss were particularly popular in the ’30s when women were attempting to literally stretch every single penny. Sunbonnet Sue’s lack of face and details make for an easy pattern, but it means that we never see her expression or what she might be feeling.

The all-important visual concept was first made popular by The Sunbonnet Babies book published in 1900 by Eulalie Osgood Grover and illustrated by Bertha Cobrett. Initially drawing these characters in the 1890s, one story goes that Corbett was aiming to prove that expression wasn’t always about the face– that her characters could have life and joy and sorrow all while keeping their faces hidden from view.

Sunbonnet Sue’s male counterpart is the overalls boy, sometimes called Overall Andy or Farmer Boy, with a straw hat that also covers his face. Corbett also designed the Old Dutch Cleanser girl logo and some have argued that the Morton’s Salt girl was a direct result of the influence of Corbett’s designs. 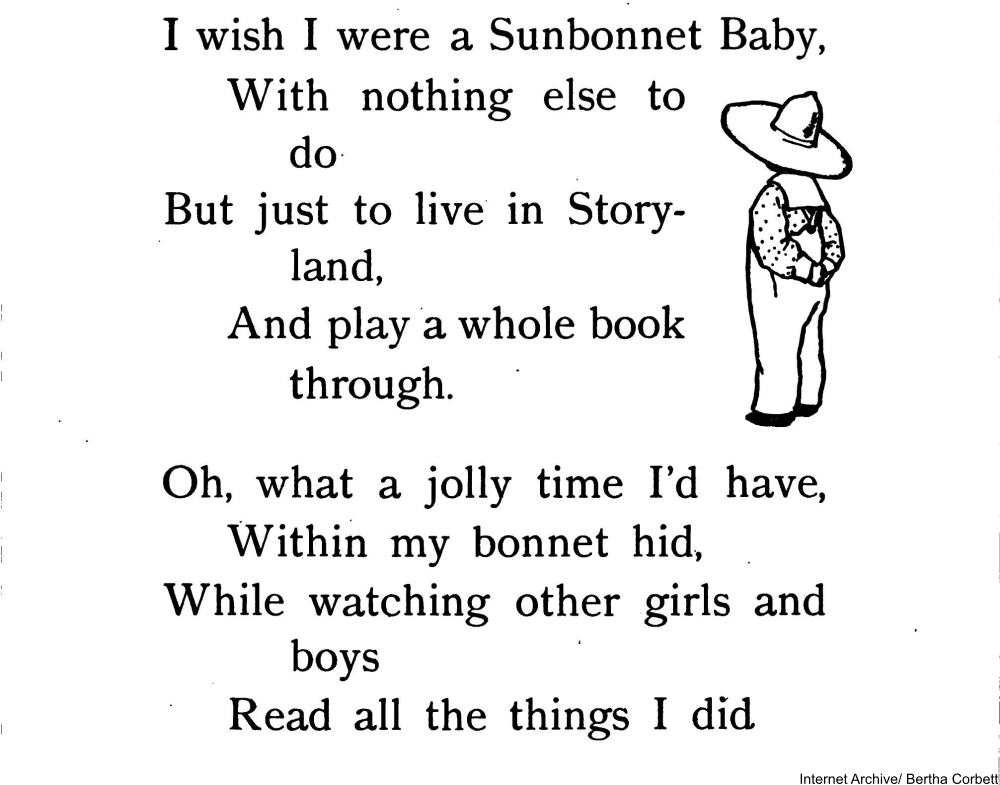 With the revival of interest in the Little House on the Prairie books and the TV show in the ’70s, Holly Hobbie was born as another incarnation of this classic character, clad in patchwork calico. This new character was named for her creator, Holly Hobbie. 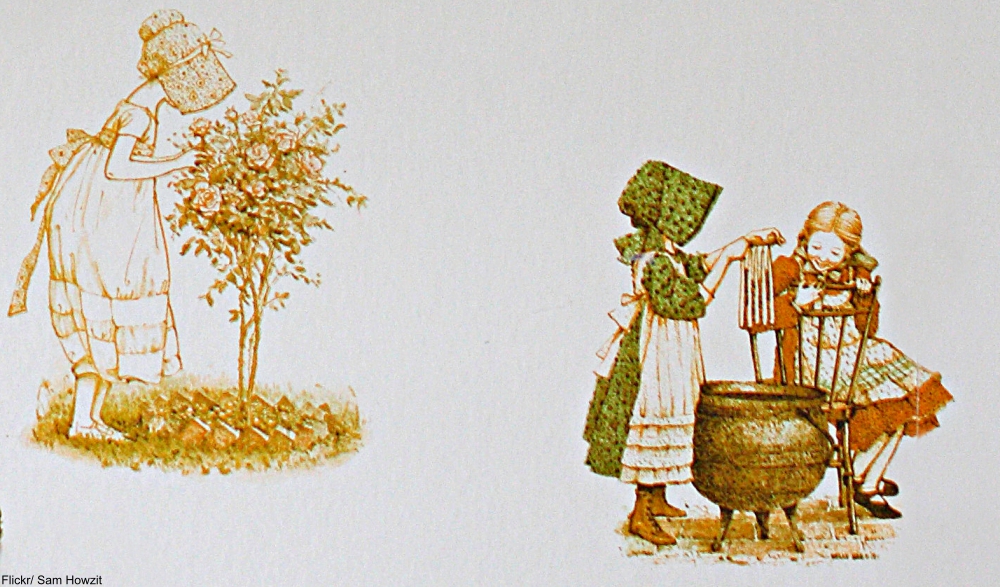 Initially a series of drawings, Holly Hobbie was soon licensed out to be made into a line of dolls, wallpaper, toys, and just about anything else a little girl might possibly use. Now as a doll with a face, Holly Hobbie took on a life of her own. While we get to see her face sometimes, in print Holly Hobbie’s appearance was often still masked with a large bonnet like her ancestor, Sunbonnet Sue. And so the long-held quilting symbol was reborn for another generation of women and girls.

Sunbonnet Sue may have been born from the Sunbonnet Babies, but she was kept alive in popular culture by works like the film Sunbonnet Sue from 1945, and a song of the same name written in 1906 by Gus Edwards and Will D. Cobb. You can listen to a 1908 recording of the charming song below.

The Sunbonnet Babies do sometimes get their clothes dirty, but they are mostly good children, like the many of the characters emblazoned on quilts for the past 100 years, though there are some exceptions. The Sunbonnet Baby characters made an impression on generations of women and girls and without them we would likely never have had our beloved Holly Hobbie.

Find out the truth about the real Johnny Appleseed right here!