Back in the 18th century divorce was not an option for couples who were unhappy. Divorce laws in the American colonies were much less strict than in England, but it still was not done very often. As early as the 1600s divorce was discussed in earnest, with the first colonial American divorce being granted in 1639. After the American Revolution divorce became easier to obtain, if not easier to stomach for the general population. But, in the 1700-1800s just because people weren’t divorcing at high rates certainly didn’t mean they were getting along. Women sometimes left the marital home when there was a dispute and when they did this their husbands took to the newspapers to complain about it. 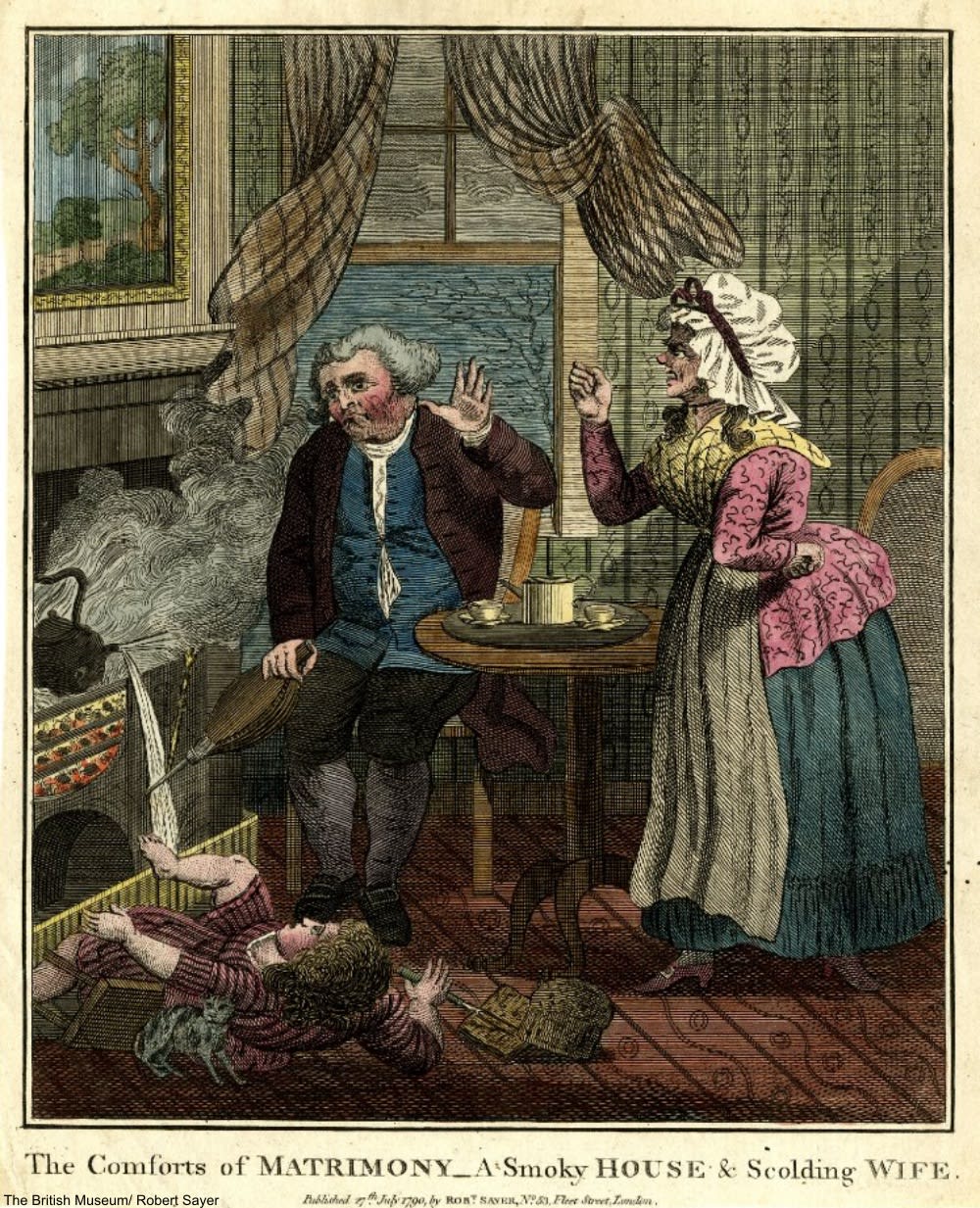 In this era, men were the breadwinners and account holders. They owned the property, secured the mortgages, and generally had all the legal power in a marriage. Many wives, when they had had enough, simply left even at their own peril. Some went to their mother’s or sister’s house, and some attempted to make their own way in the world. But, their husbands wanted to make sure, even if they were not free to remarry, that they didn’t get anything from them that wasn’t their due.

Angry, and one suspects sad, husbands would place advertisements in the local newspaper. These ads alerted the community to the couple’s separation as it was happening in real time. But, these separations were not the only thing being announced. In nearly every case of a runaway wife ad from the era, the husband claims he will not pay any debts she incurs while separated from him. Sometimes the general public is warned to take caution in dealing with her since, without a man to pay her debts, she will most certainly default on any debts she accrues.

The following is from an 1806 ad in The National Intelligencer and Washington Advertiser: “CAUTION. WHEREAS my wife MARY has eloped from my bed and board. Therefore all persons are hereby warned against crediting or harboring her on my account, as I am determined not to pay any of debts of her contracting after the date hereof.” 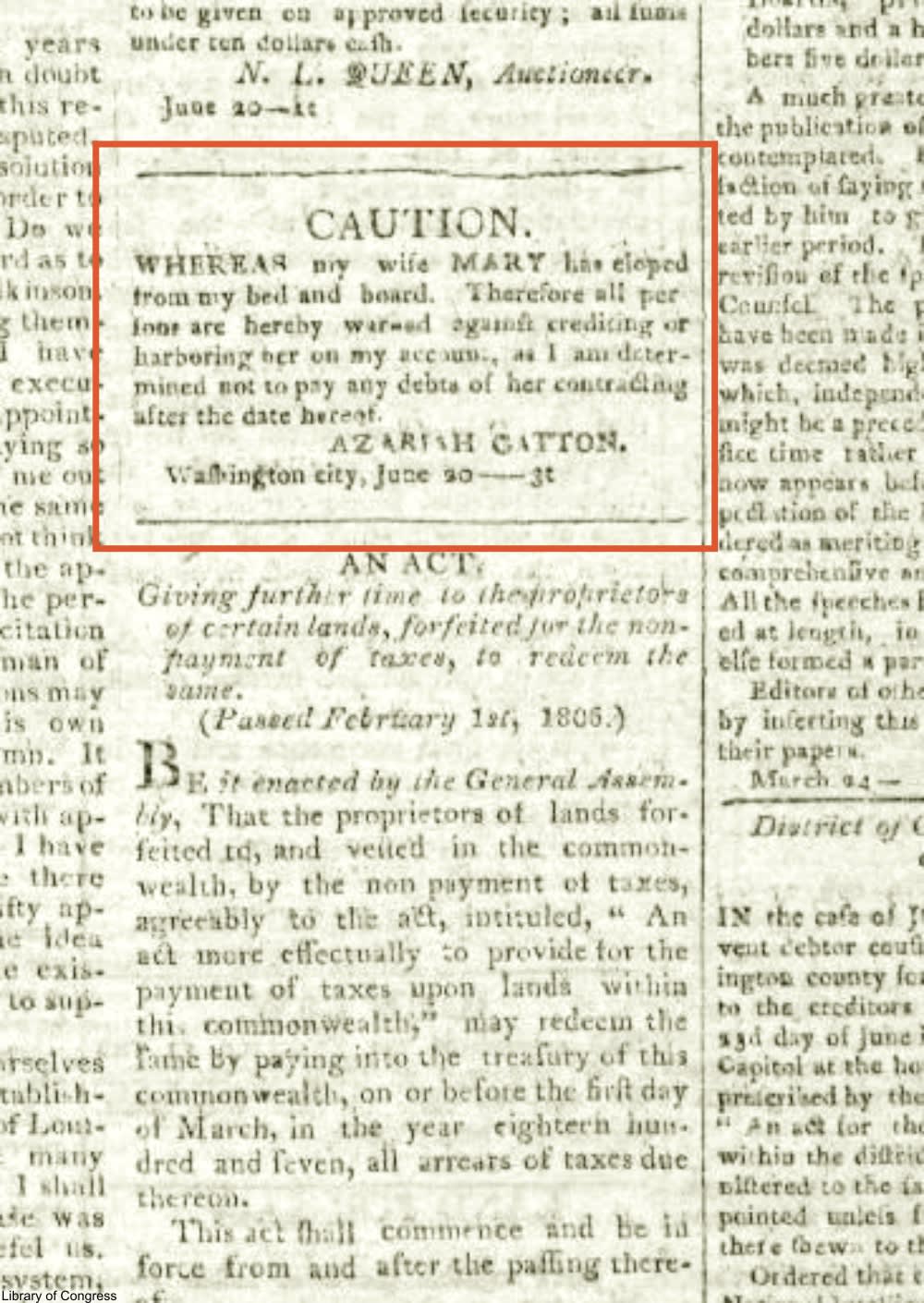 It was clear that what he wanted most was for his wife to come back. Sadly, he would make it hard for her to be out in the world on her own without significant familial support in order to make that happen.

Sometimes the ad clarified if the wife had run off with another man. This ad from 1809, also from the The National Intelligencer and Washington Advertiser reads thusly: “Notice WHEREAS Elizabeth Burnill, my wife, has eloped from my bed and board, and living an adultress with another man, this is to forewarn all persons whatever, from trusting her on my account, as I will pay none of her debts, and I mean to apply to the next General Assembly of Maryland for an act of Divorce. John Burnill.” 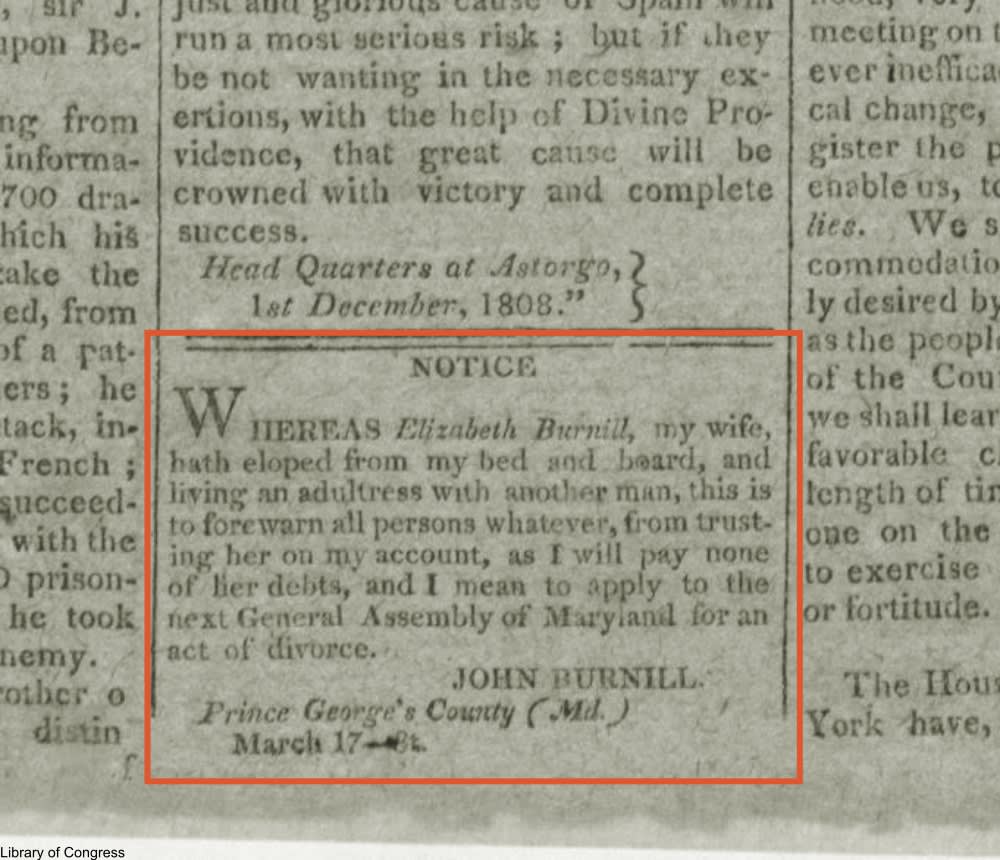 The use of the phrase “my bed and board” was common for men at the time, since women were not seen to own or possess the homes they shared with their husbands. Wives were seen to have escaped the husband’s property sneakily. And, the term “elope” was used in these ads to imply that the woman had committed adultery, whether or not she had done so. 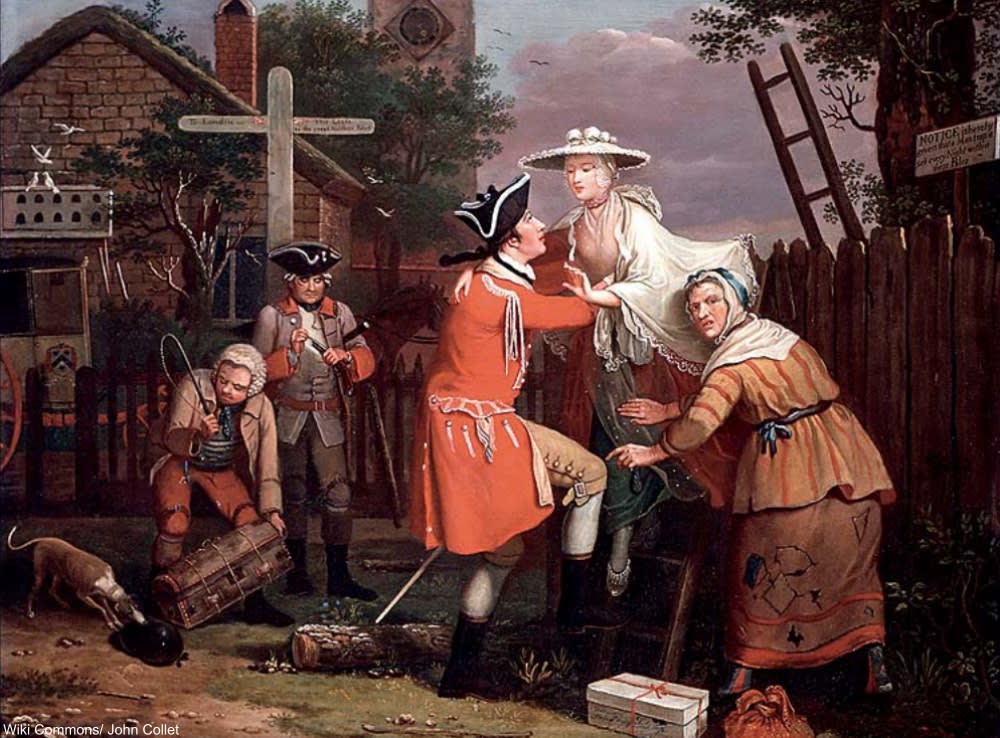 In the days before established legal norms, these announcements served many purposes. They alerted family and friends to what had recently happened, they paved the way for reconciliation, sometimes they described the intent to divorce once and for all. And, for some, they simply wanted to shame their wives by telling the whole world that they had run off and obtained new lovers. Some wives, faced with the awful publicity of these untrue accusations, wrote their own response advertisements refuting the charges against them and sometimes leveling new indictments against their husbands, such as not providing for the family or incurring too many debts.

Can you imagine having such a public fight? Long before the days of social media, people were having it out for all to see in the newspapers.

Selling one's wife was once a viable alternative to divorce: Click “Next Page” below!