The Reason Cherries Are the Go-to Retro Pattern

A quick search online for retro dresses or even kitchenware and you’re bound to have at least a few results that are covered in cherries, often with polka dots in the background. Sometimes the heaps of cherry dresses can outshine other, potentially more accurate, reproductions. And, it’s not just dresses.

So, what is it about cherries that says “vintage” to the world? And why do reproductions nearly always have polka dots behind them? Was this symbol used in decades past as much as its prevalence now would have us believe? To understand where this trend comes from we have to back to a time when symbols on clothing were rife with meaning. 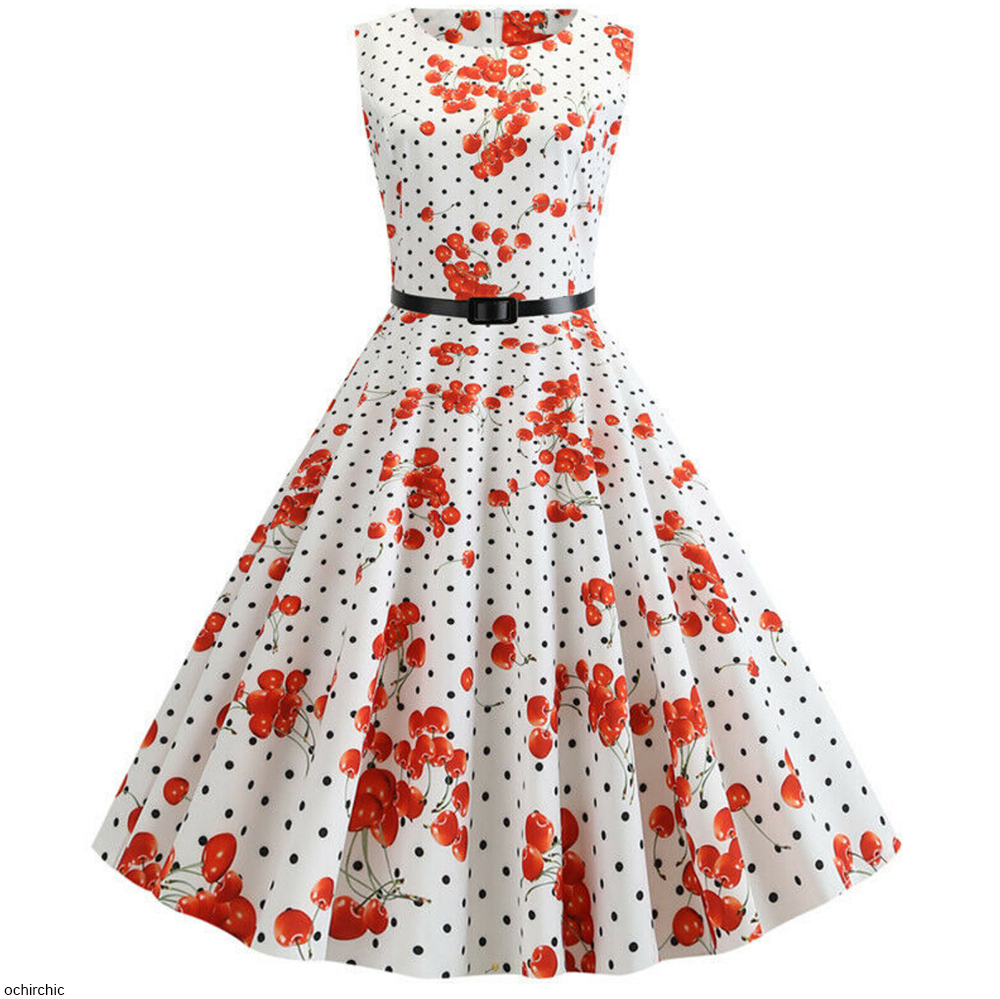 Cherries have long been a part of women’s clothing trends. Gowns from the turn of the century onward featured cherry motifs, though not in huge number. These were sometimes embroidered on -not cheap to have done- to be a kitschy fashion statement long before the genre was widely known. At the time cherries symbolized innocence. This is said to be particularly true when the cherry leaves also feature prominently. Along these lines it is said that when no leaves are present it means something far more scandalous and symbolizes raw female sexuality, but that might be a stretch. 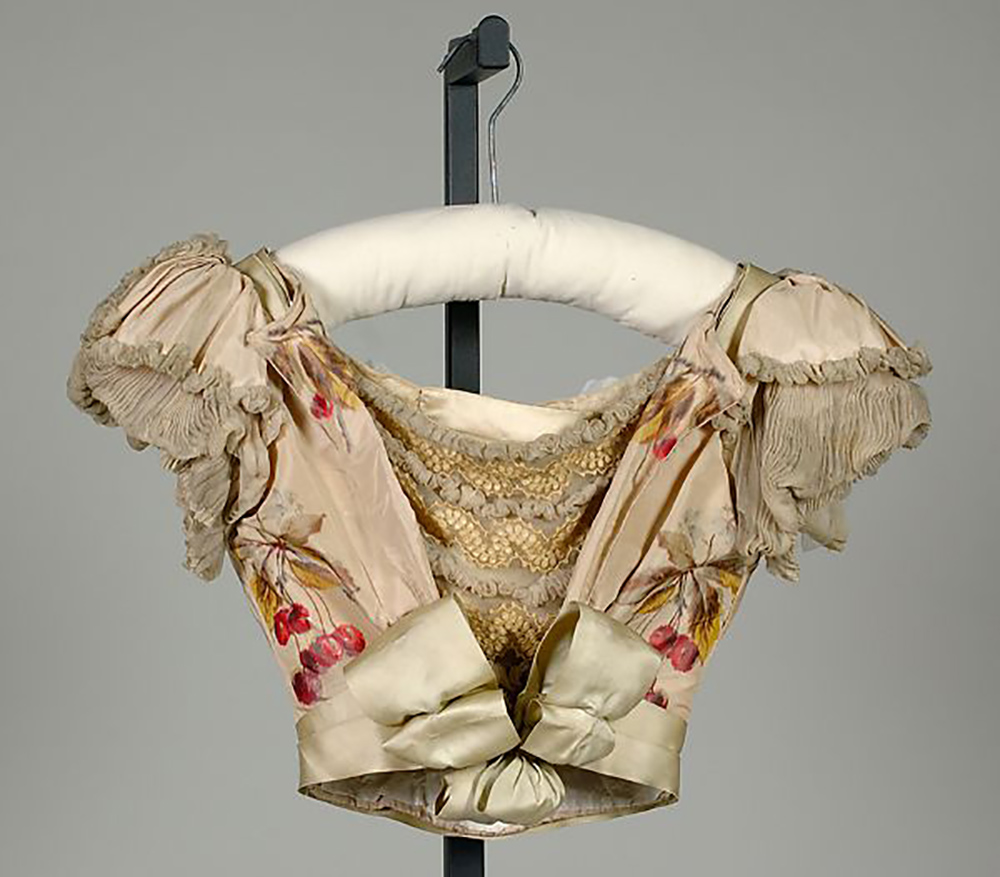 House of Worth printed cherry dress bodice from 1898. Via/ Met Museum

For decades the cherry in women’s clothing signaled innocence above all else. For the generations that found women’s shins to be a threatening sight, they certainly would not have taken well to any overtly sexual symbols. For the average woman cherries did stand for purity and youth, two things which women held tightly to at the time.

Cherries began to appear more frequently on ladies clothing, such as a 1932 Parisian fashion show which featured a black dress emblazoned with cherries and leaves. Simple cotton dresses with prints were favored during the decade like the French example below. 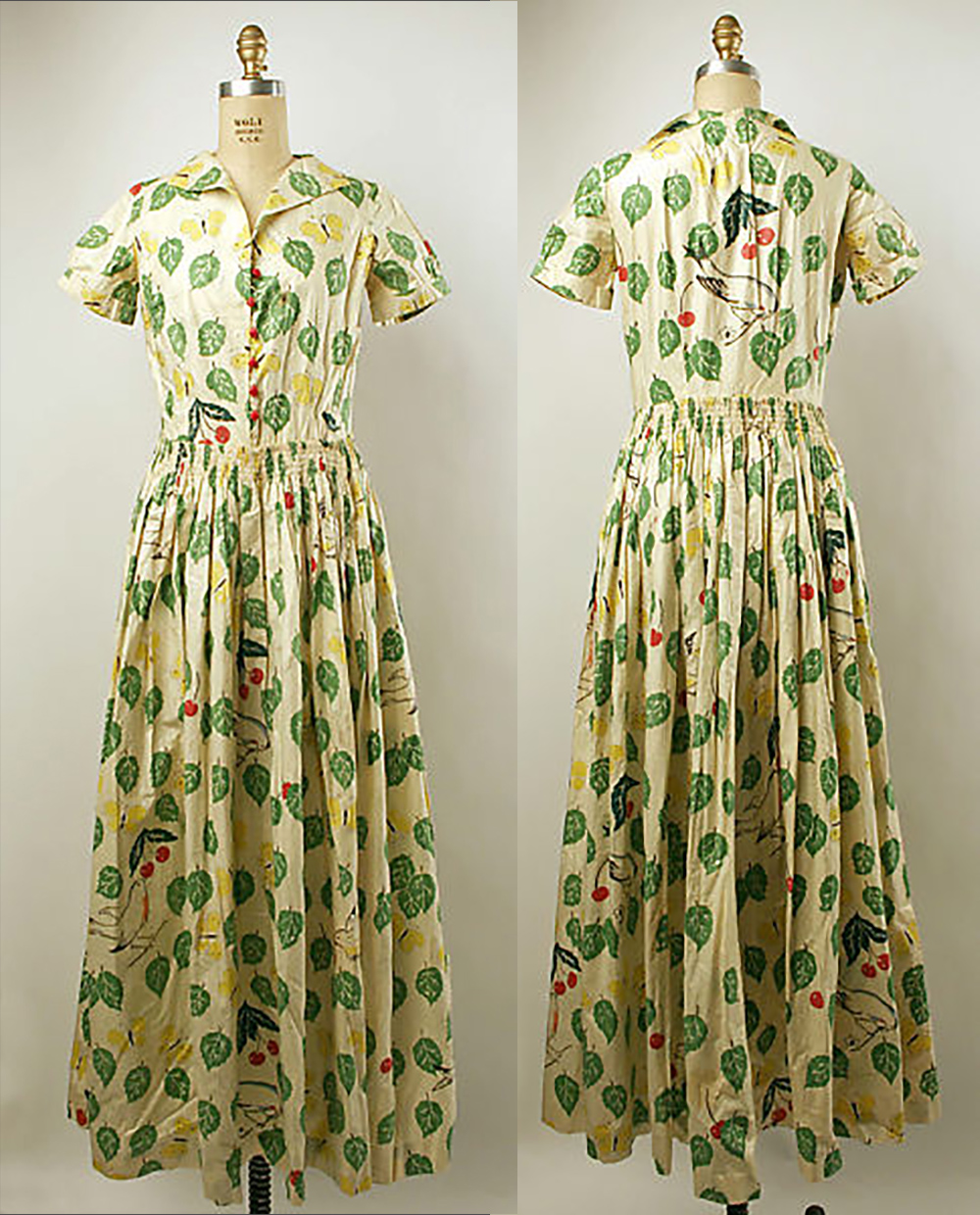 Front and back of a 1930s cherry dress that’s more leaves than cherries. Via/ Met Museum

Cherries also began to appear on home goods like tablecloths, alongside flowers and other kinds of fruits. In the 1940s and 1950s this trend would continue with cherry brooches and jewelry, like the 1940s Bakelite brooch below. 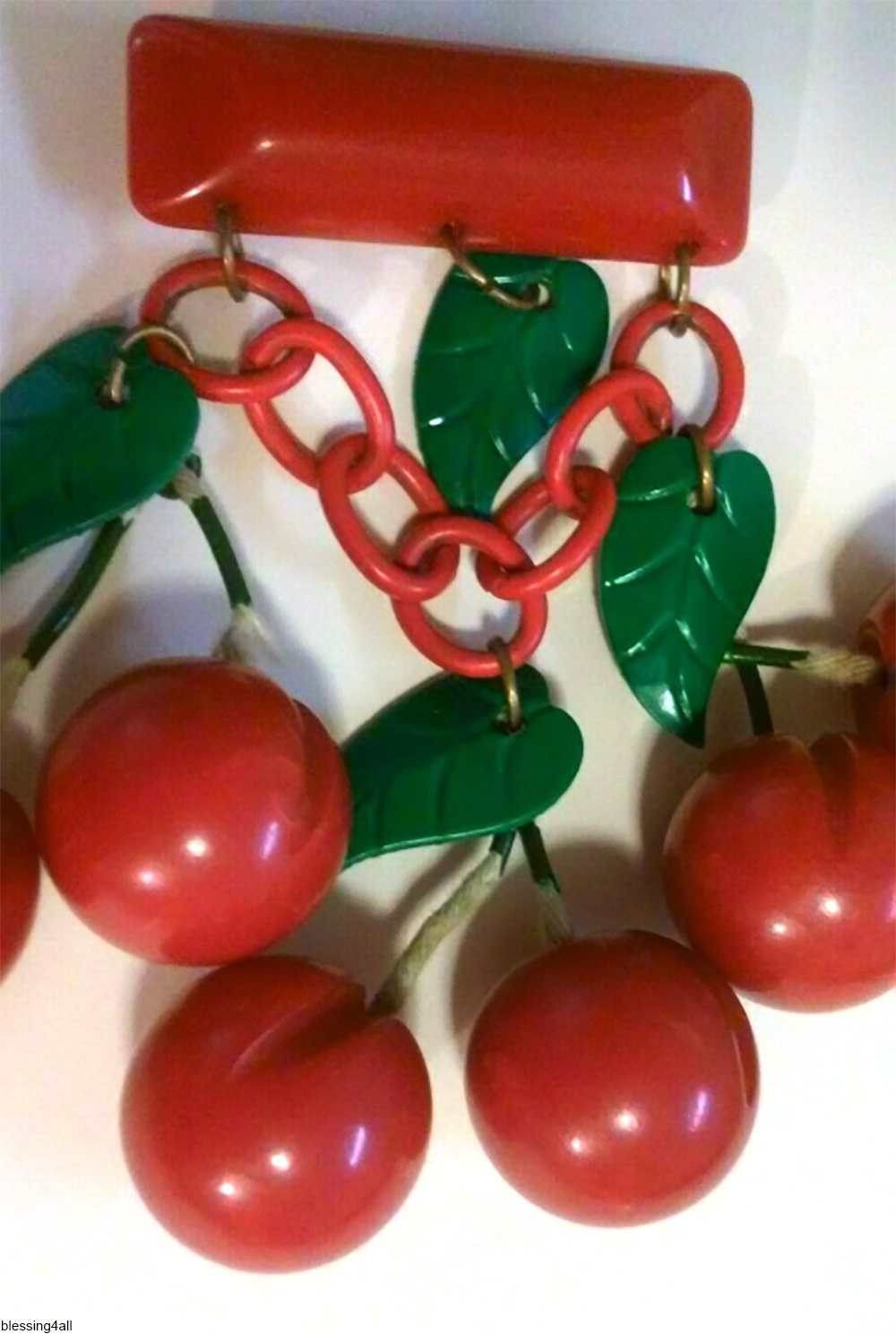 The trend also continued in home decor (as in 1950s kitchen canister below). 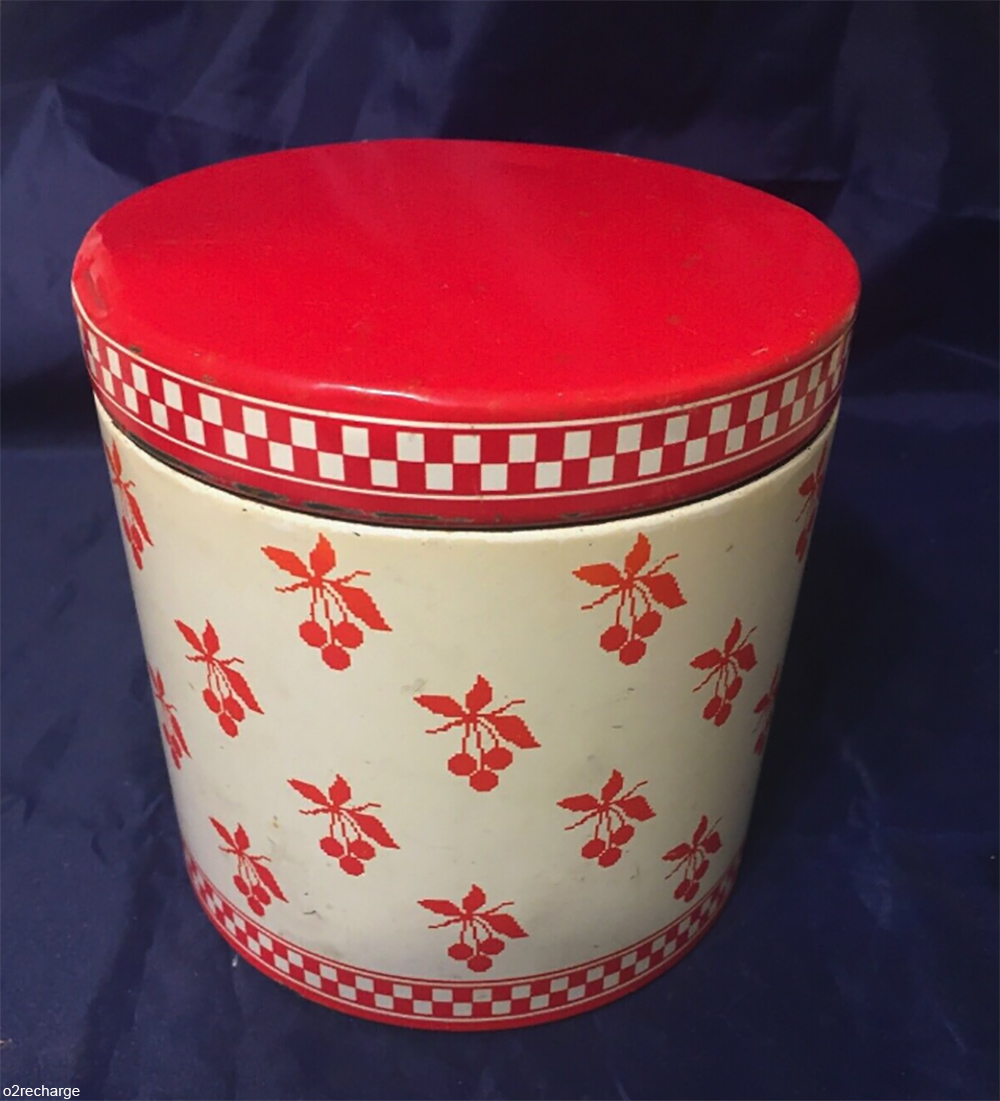 Cherry printed kitchen canister from the 1950s. Via/ eBay

Let’s also not forget that pies, including cherry, were an increasingly popular dish at the time. Between the late 1800s and 1947 the number of known sweet pies went from 8 to 65. The diner culture of the 1930s thrived on slices of pie and cherry was always in the line up. Cherry pie might not be as American as apple pie, but it’s certainly up there.

But, where did the polka dots come from? Back in the 1930s polka dots were a huge trend in women’s clothing. One need only to look at extant examples of dresses or look at a fashion show of the era to see just how en vogue they were at the time. Here is a silent film of a fashion show from 1932 where multiple examples of polka dots are prominent, from delicate to hefty in size.

The combination of both polka dots and cherries wasn’t something that was popular in the 1930s-50s as they were two separate trends. But, adding one to the other is sort of a mishmash which is intended to capitalize on multiple fashion statements at once. 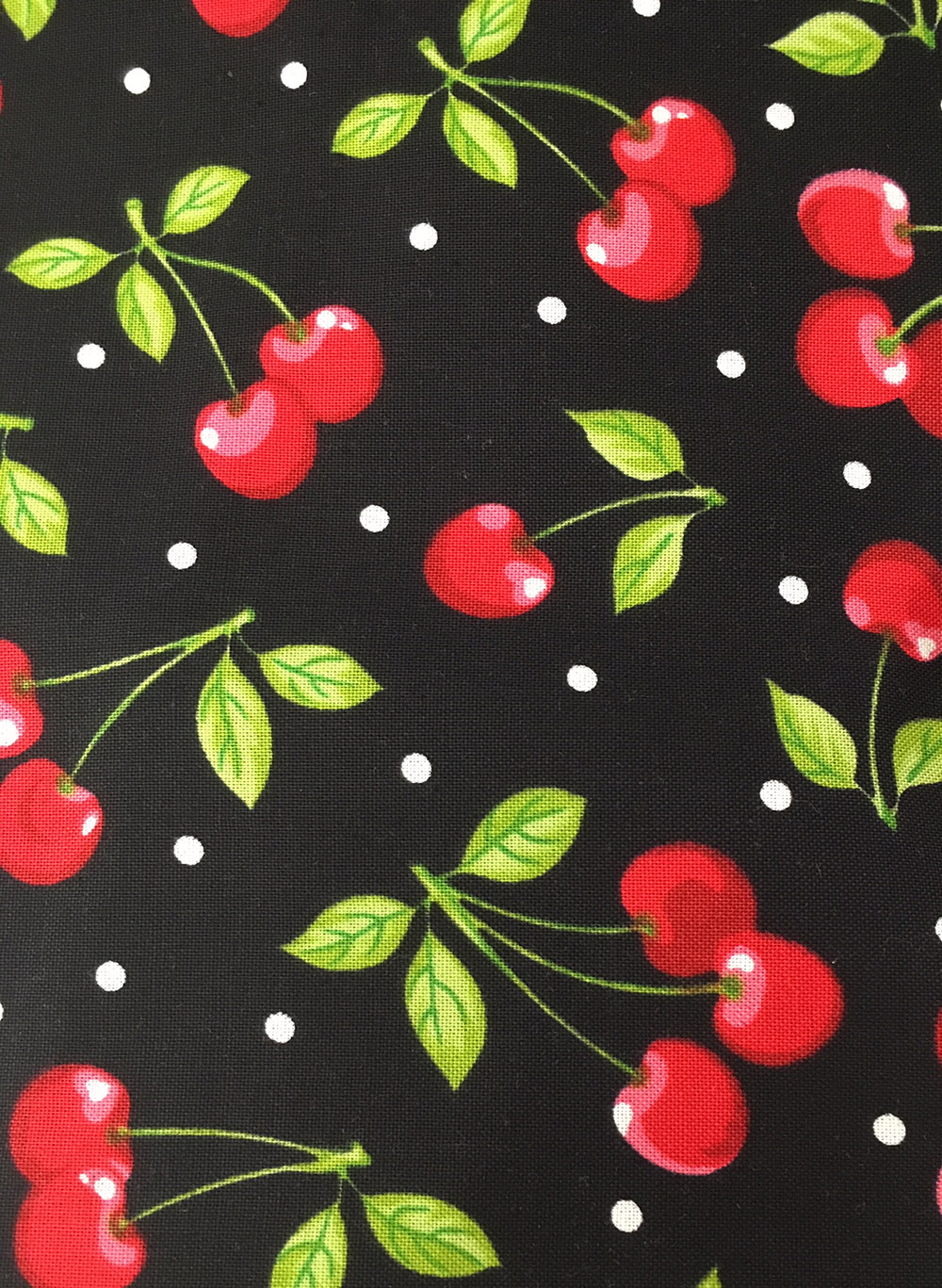 Today, the combination has been used so much that it’s become its own code. When you see something printed with cherries and polka dots, you instantly know that the look they’re going for is vintage. t’s so common that some people think of it as a cliché these days.

The trend for retro cherry prints first appeared in the early 2000s and has been going strong ever since. It does reference the clothing and style of bygone eras, but not in the way that people back then would have used them.

How do you feel about the modern cherry trend? Is is better for clothing or home wares?