Rare Photos Give A Glimpse Of World War I

Accurately called The Great War, World War I saw the loss of over 16 million lives and the reformation of international boundaries and treaties. The devastation and severe hardships were felt all around the world. At the same time, the precursors to the modern weapons we use now were being tested in action during the many long battles of the Great War. It was a strange time for many: loved ones were missing, battles seemed never-ending, and women had to pick up slack where they could. The numerous photographs we have today are testaments to what happened and how people lived their lives in spite of a world-wide war. These photographs give us a window into that unusual time. 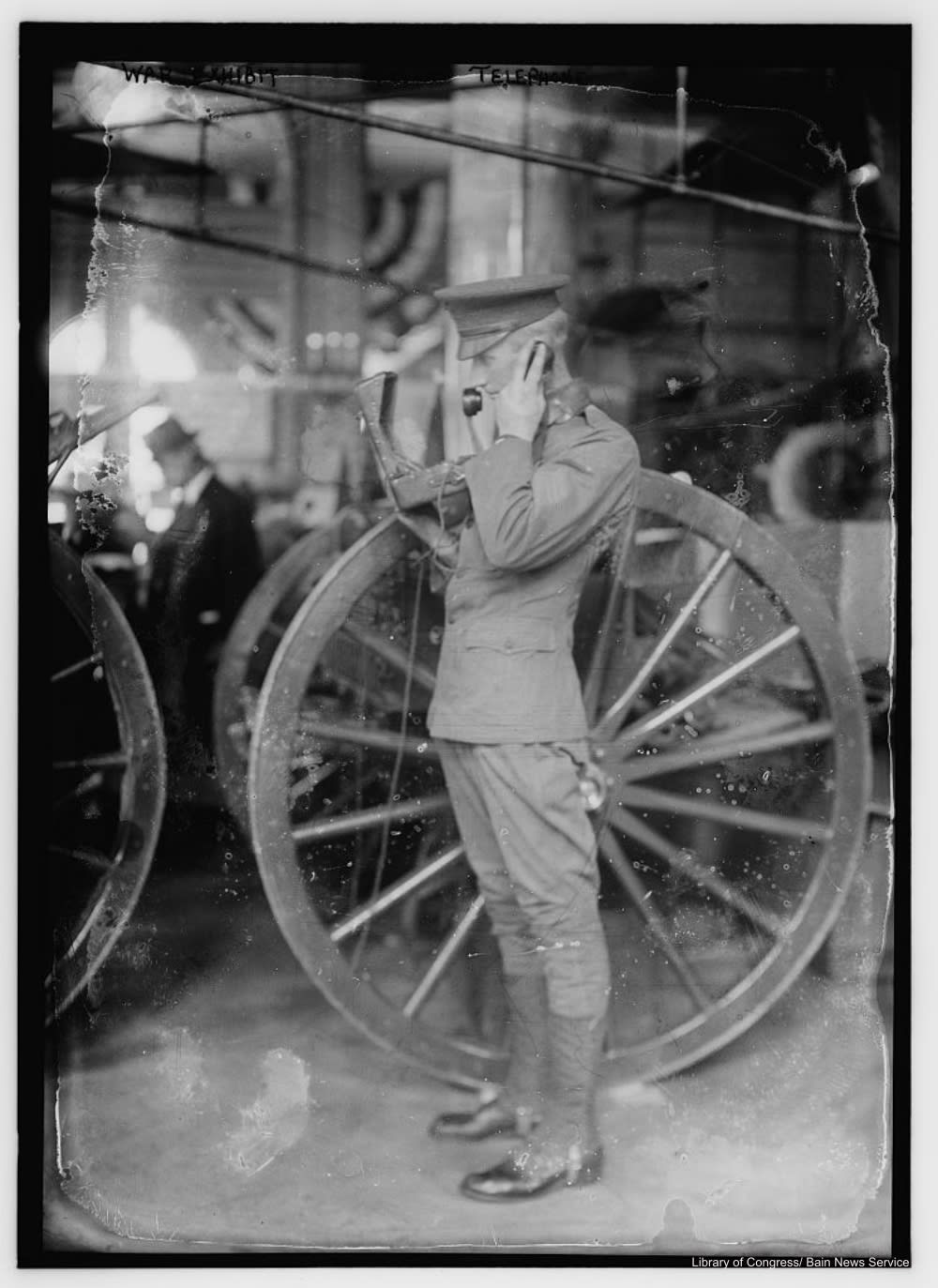 Soldier demonstrating a field phone mere weeks before the war at the “Peace and Preparation Conference” held at the Hotel Astor in New York City in June 1915. Image via/ Library of Congress 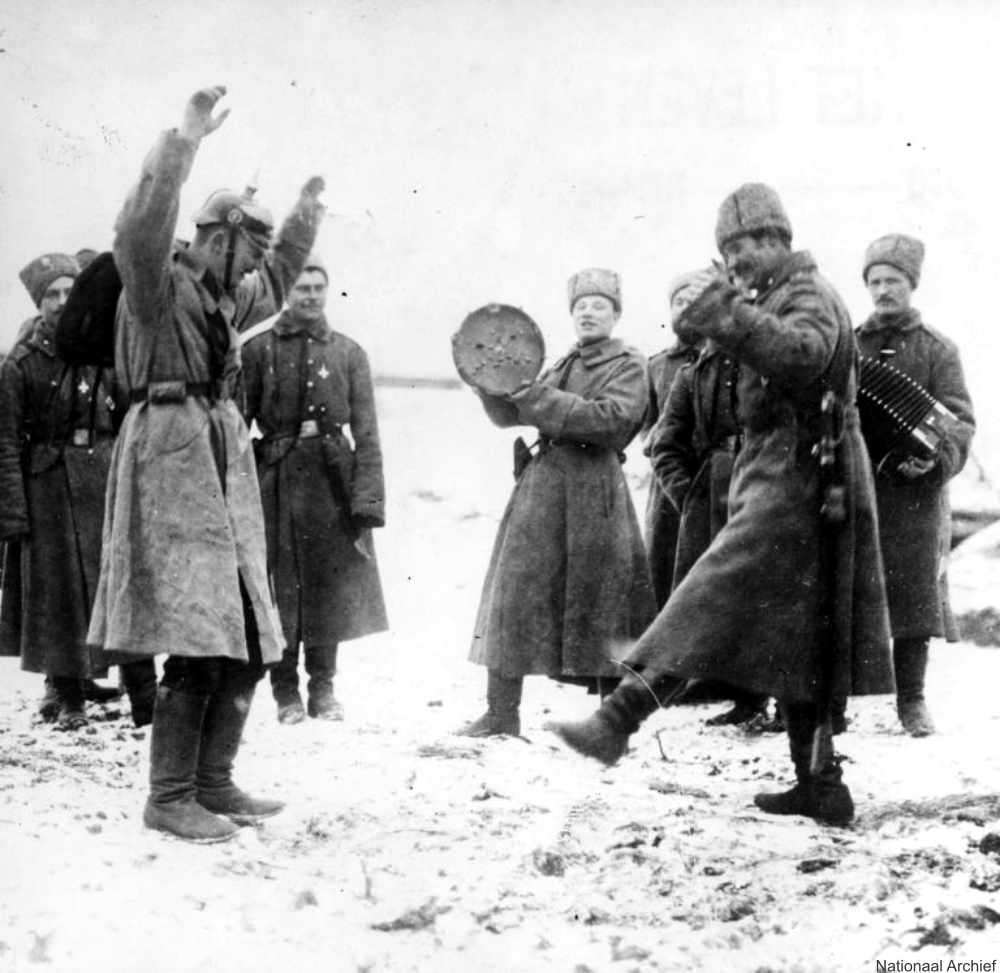 Russian soldier teaching German POWs a Cossack dance in the snow circa 1915. Image via/ Flickr 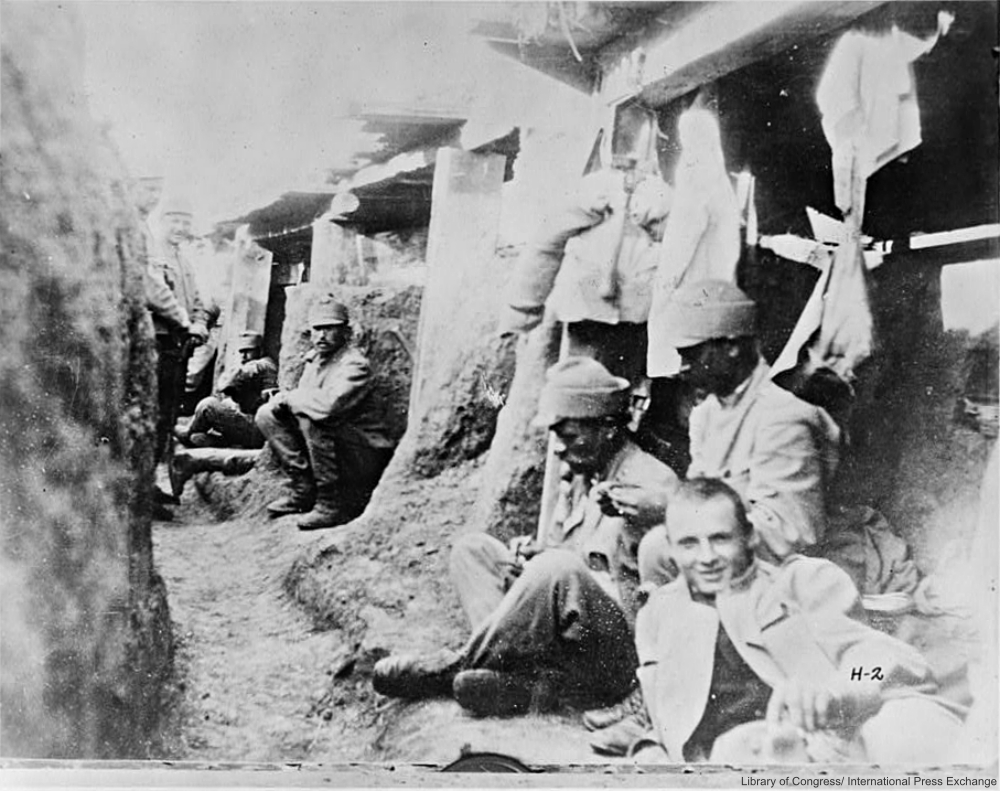 German soldiers settle into trenches circa 1915. Image via/ Library of Congress

The Western Front became the scene for the intense and lengthy trench warfare between the Allied Forces and the Central Powers. Troops were confined and stalemate battles drew on for months. 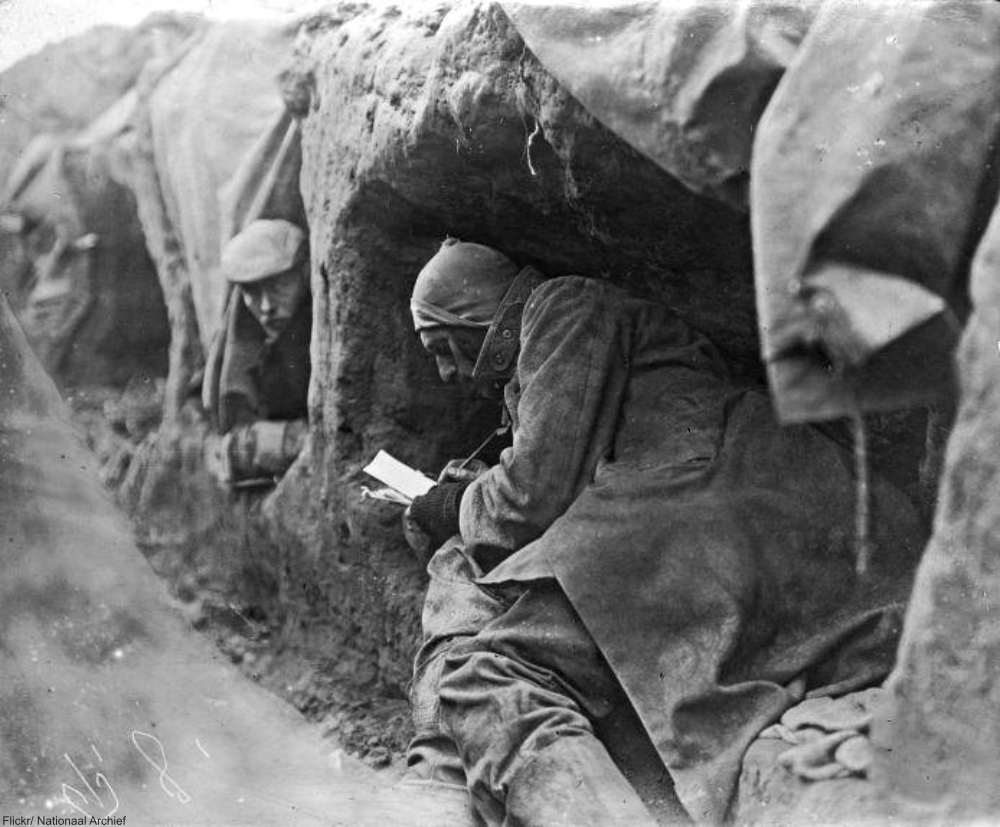 Writing letters home in the trenches circa 1914. Image via/ Flickr 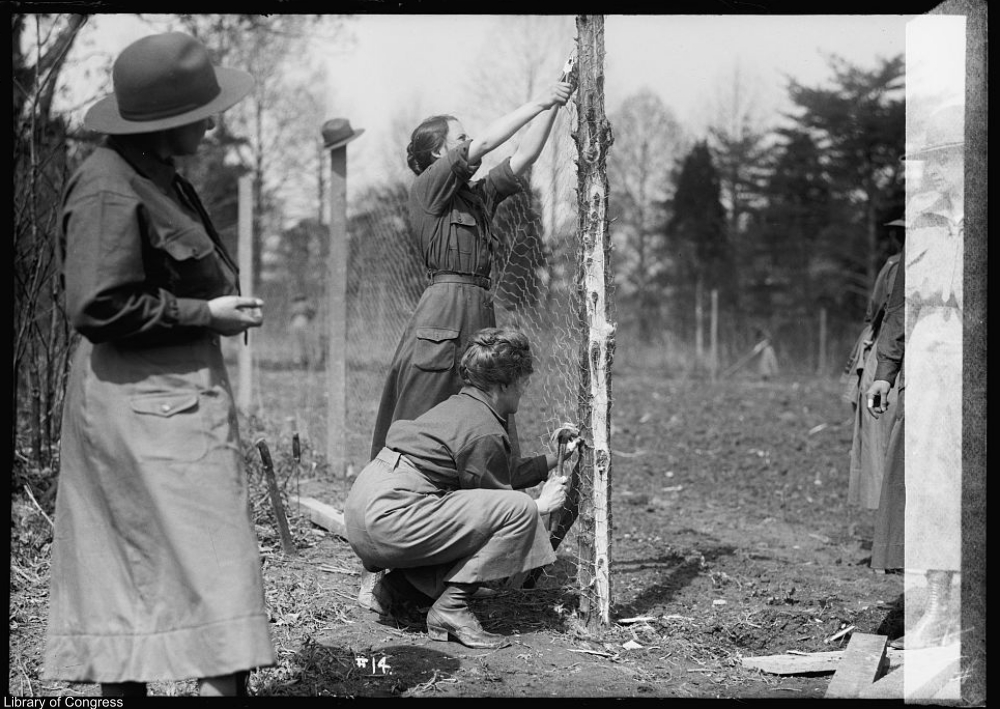 Women were called upon to do many of the jobs that had previously only been held by men. This included many forms of manual labor and nearly all jobs were done in skirts. 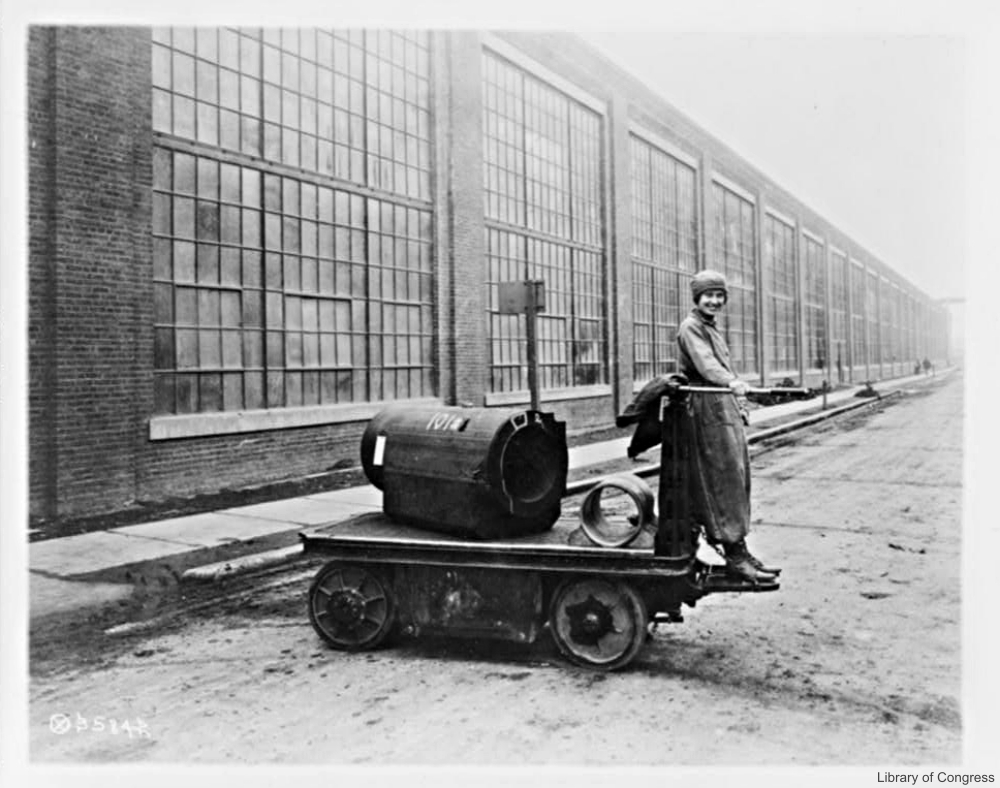 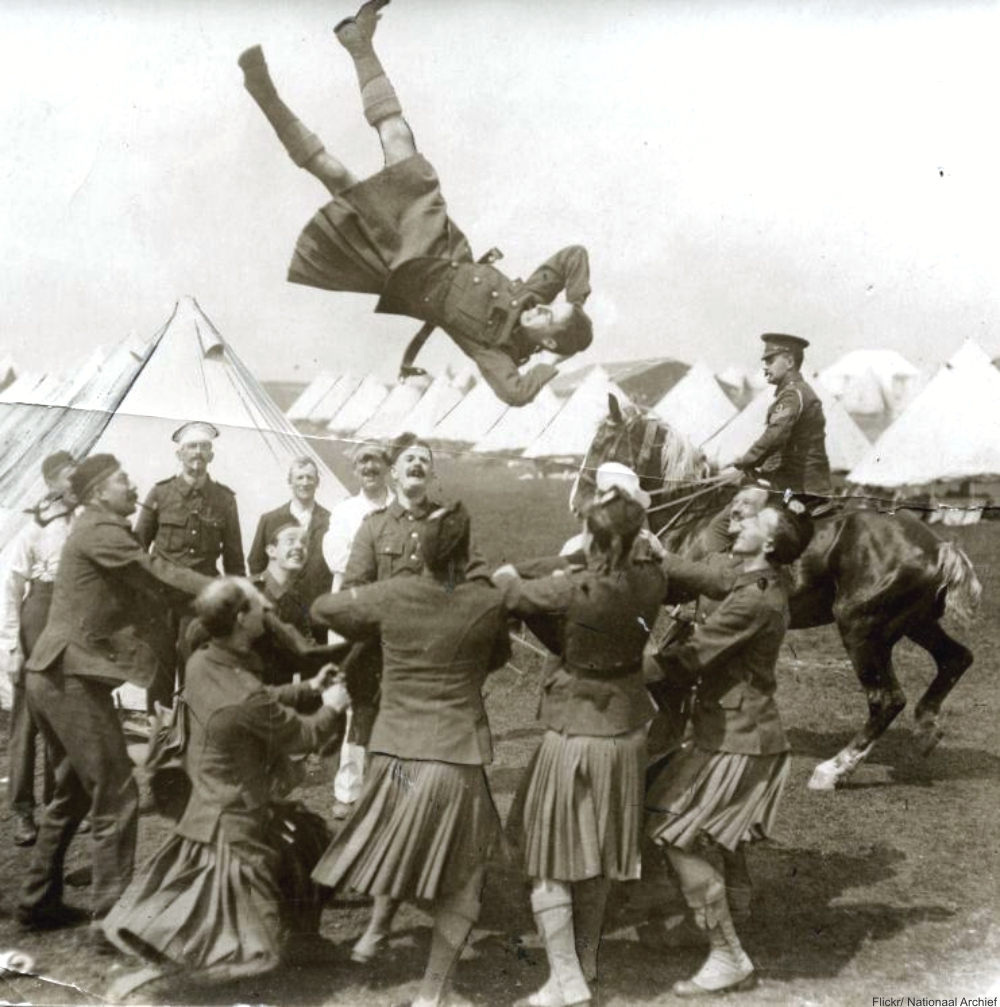 Scottish and British Soldiers prepare for battle circa 1915. Image via/ Flickr

As the first major war in which airplanes and tanks were used, the stakes were higher. But, since the technology of plane-building did not yet produce durable and reliable aircraft, many a light-weight plane went down during reconnaissance flights. Using airplanes for bombing was not yet possible, but single-fighter planes were used by the major players in WWI. The “Ace” fighter pilots as they were known were pilots who had successfully claimed five victories against enemy planes, the most famous of which came to be known as the Red Baron (with eighty reported victories). 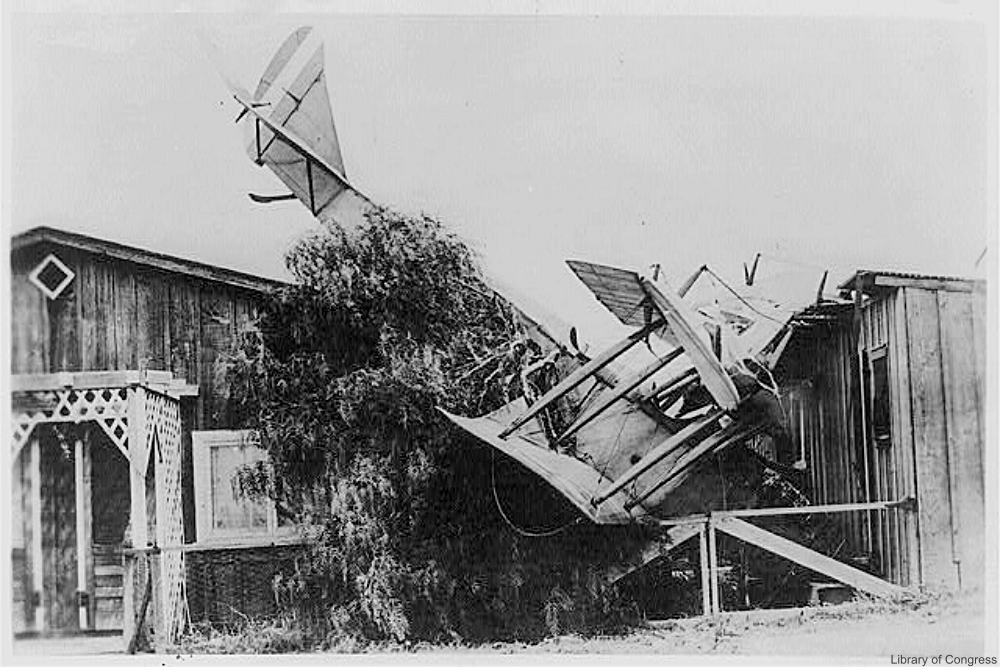 Crashed French Bi-plane during WWI. Image via/ Library of Congress

Tanks were developed as a tool to cross the trenches that had become endemic to the war. The new-fangled track vehicles were created both in France and England and could traverse terrain that no previous military vehicle could cross. Germany was slow to produce tanks, viewing them as “dishonorable” and ineffective. 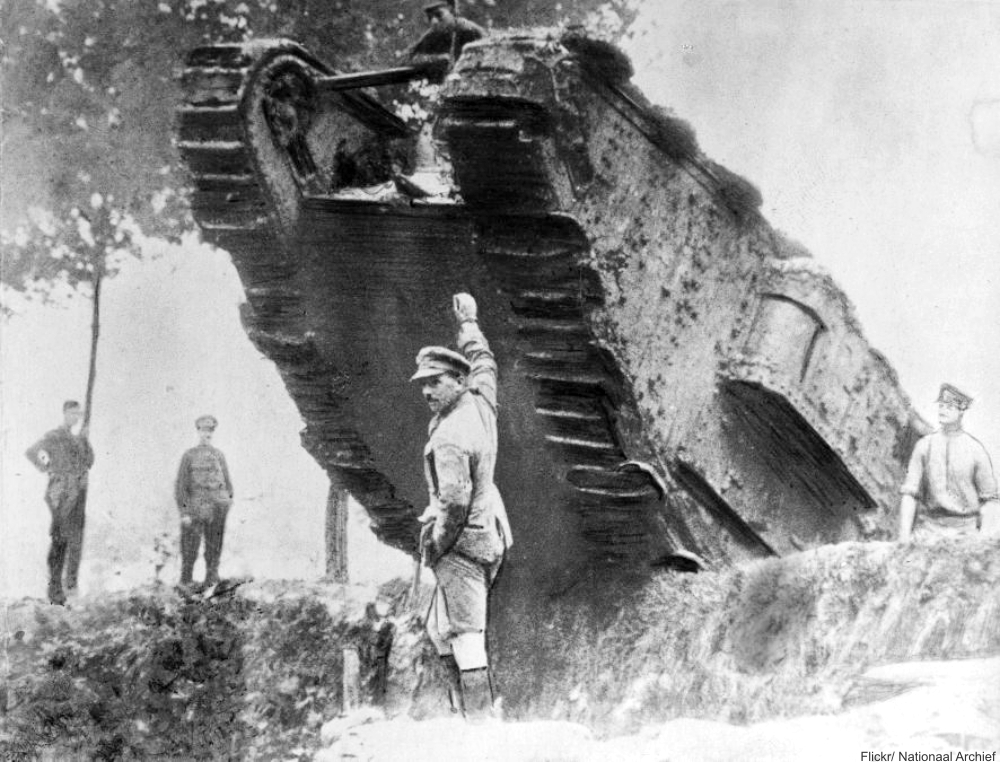 “Sergeant” Stubby was one of the most-decorated dogs to help in the war effort. Over the course of eighteen months, Stubby participated in seventeen missions, bringing news of impending mustard gas attacks, finding wounded soldiers, and even once capturing a German spy. Working within the 102nd Infantry Regiment, this Boston Terrier started his life as a stray puppy and ended it as a war hero. Stubby died in 1926. 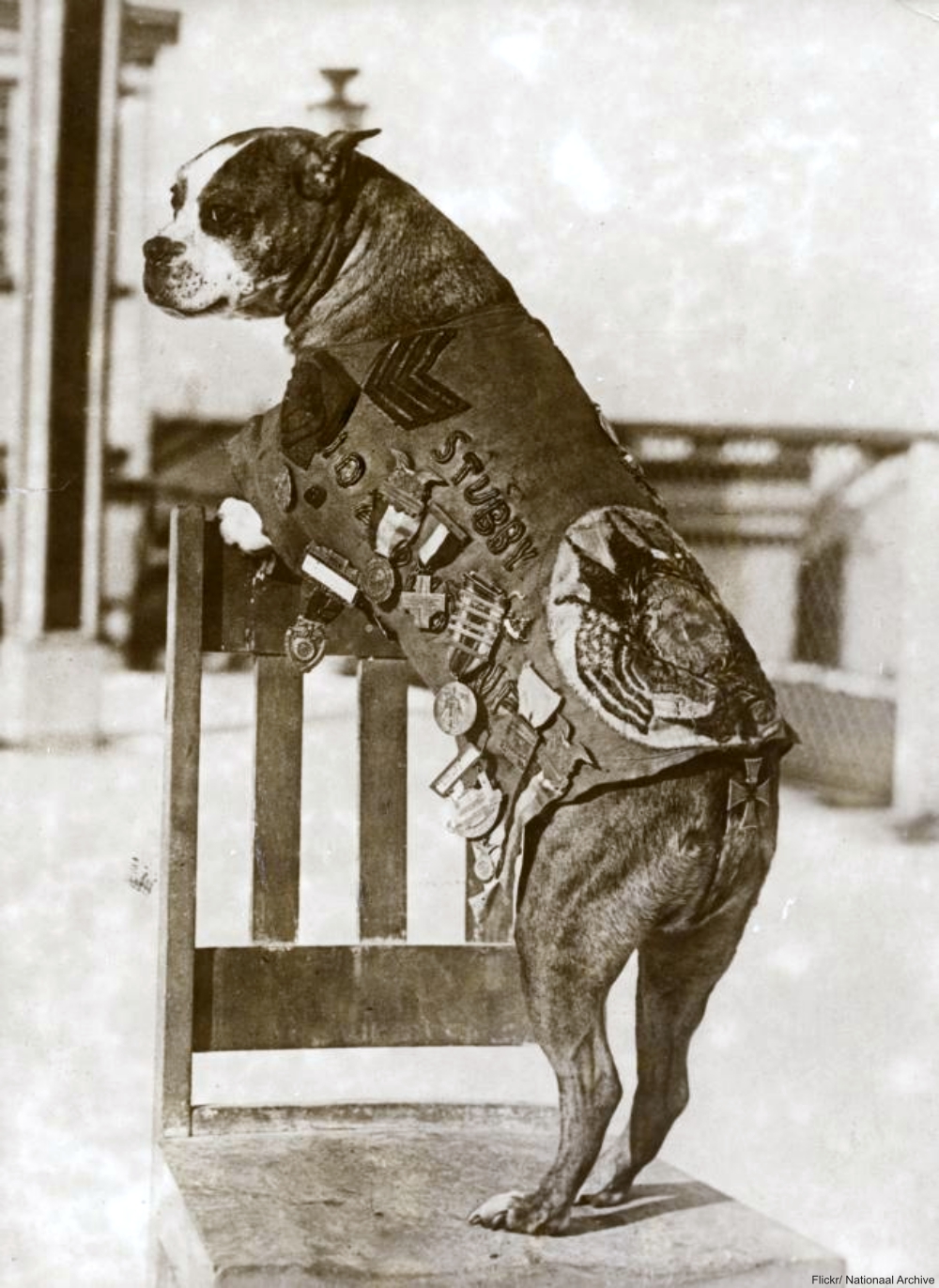 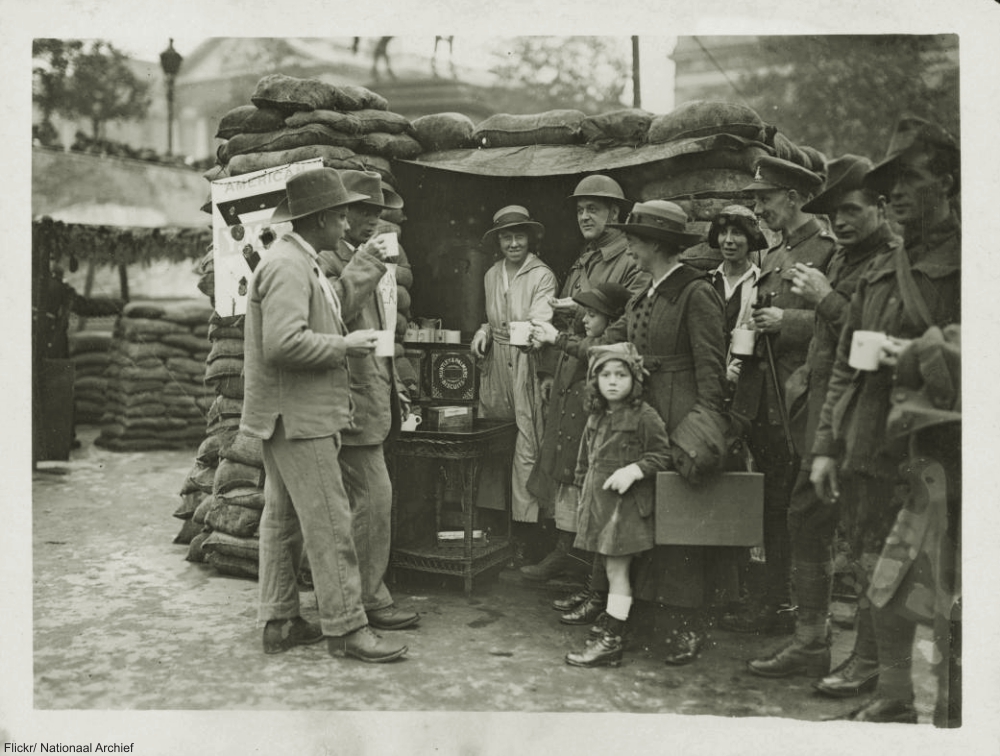 Despite the fact that the United States did not immediately join WWI, when we did we had public campaigns to decrease food consumption, much like our allies. Many of the mottos and slogans that would later be used during WWII were actually developed during the First World War. Food allocations, prices, and other aspects of food management were controlled by the United States Food Administration in an attempt to ease the burden on the European allies who had been unable to produce crops due to heavy fighting. 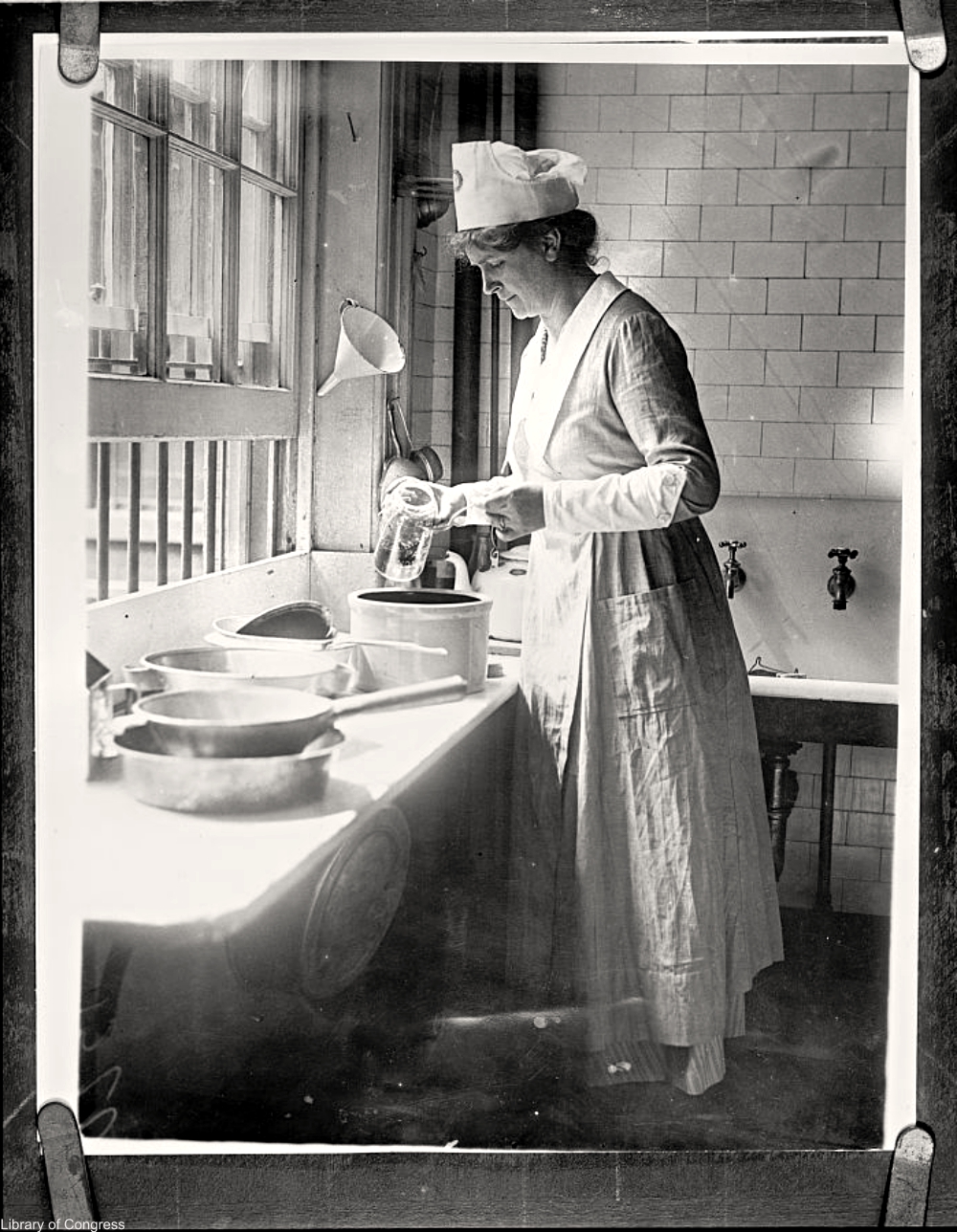 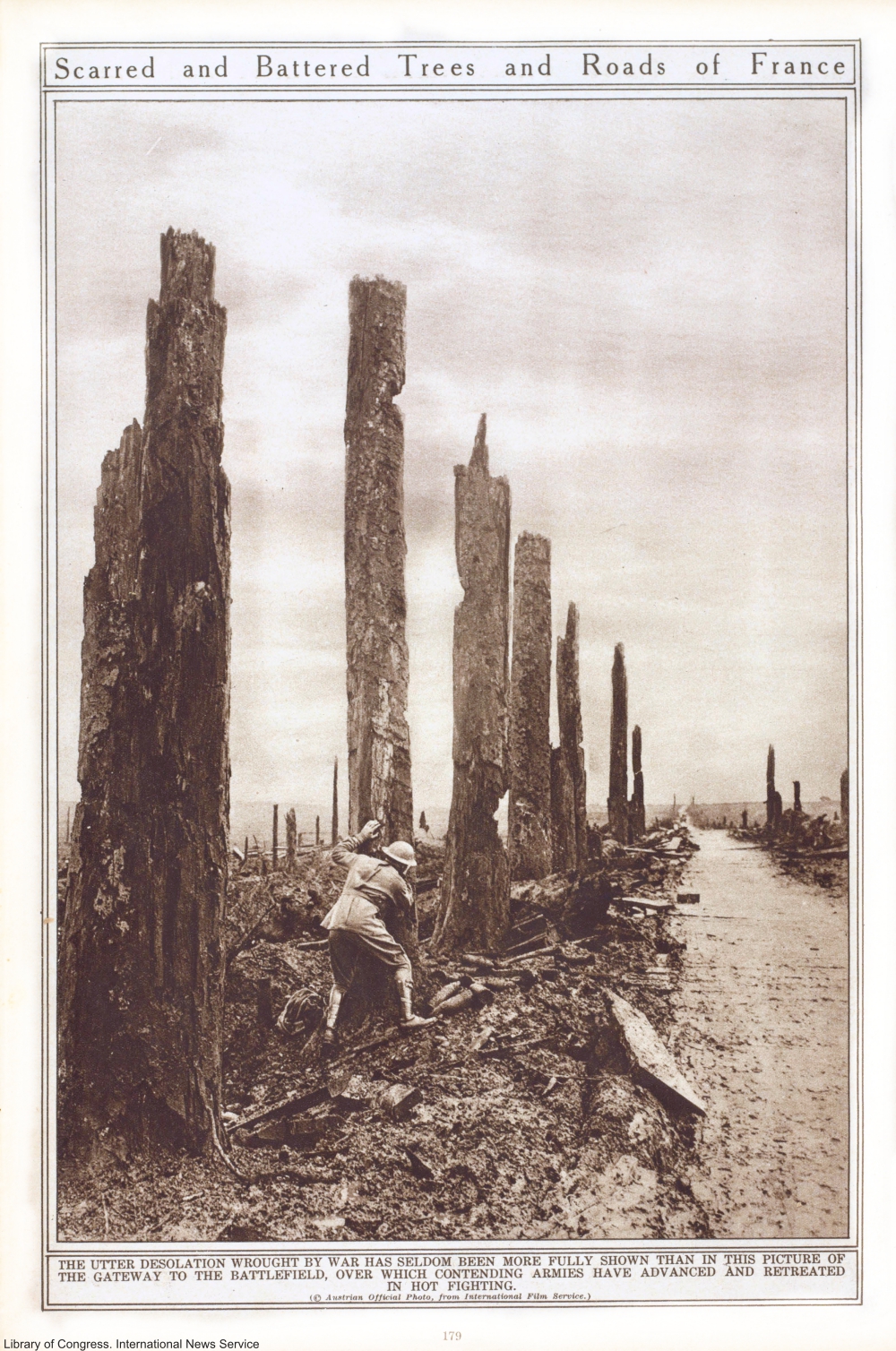 Damage to trees in France after WWI. Image via/ Library of Congress 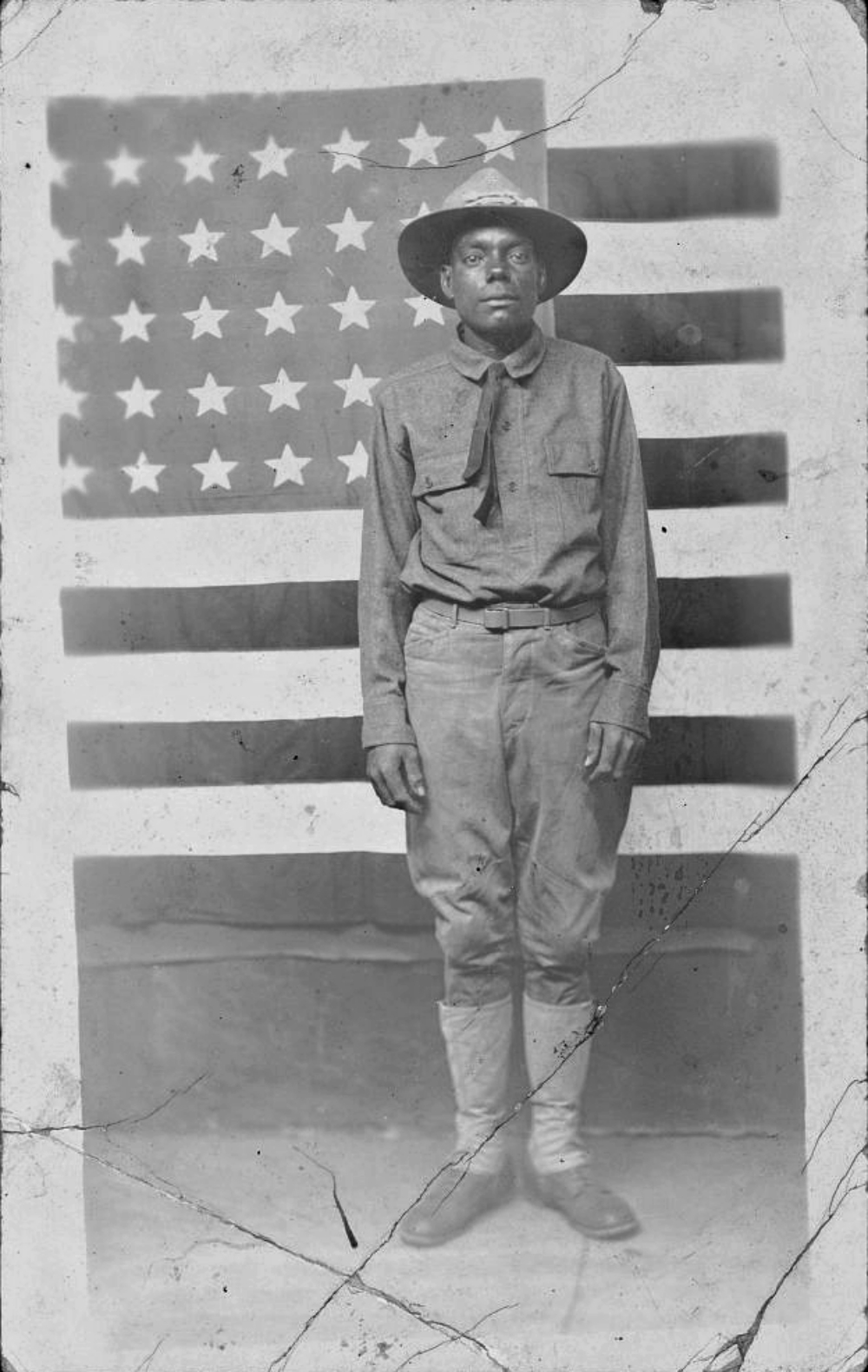 WWI soldier in uniform standing in front of American flag. Image via/ Library of Congress 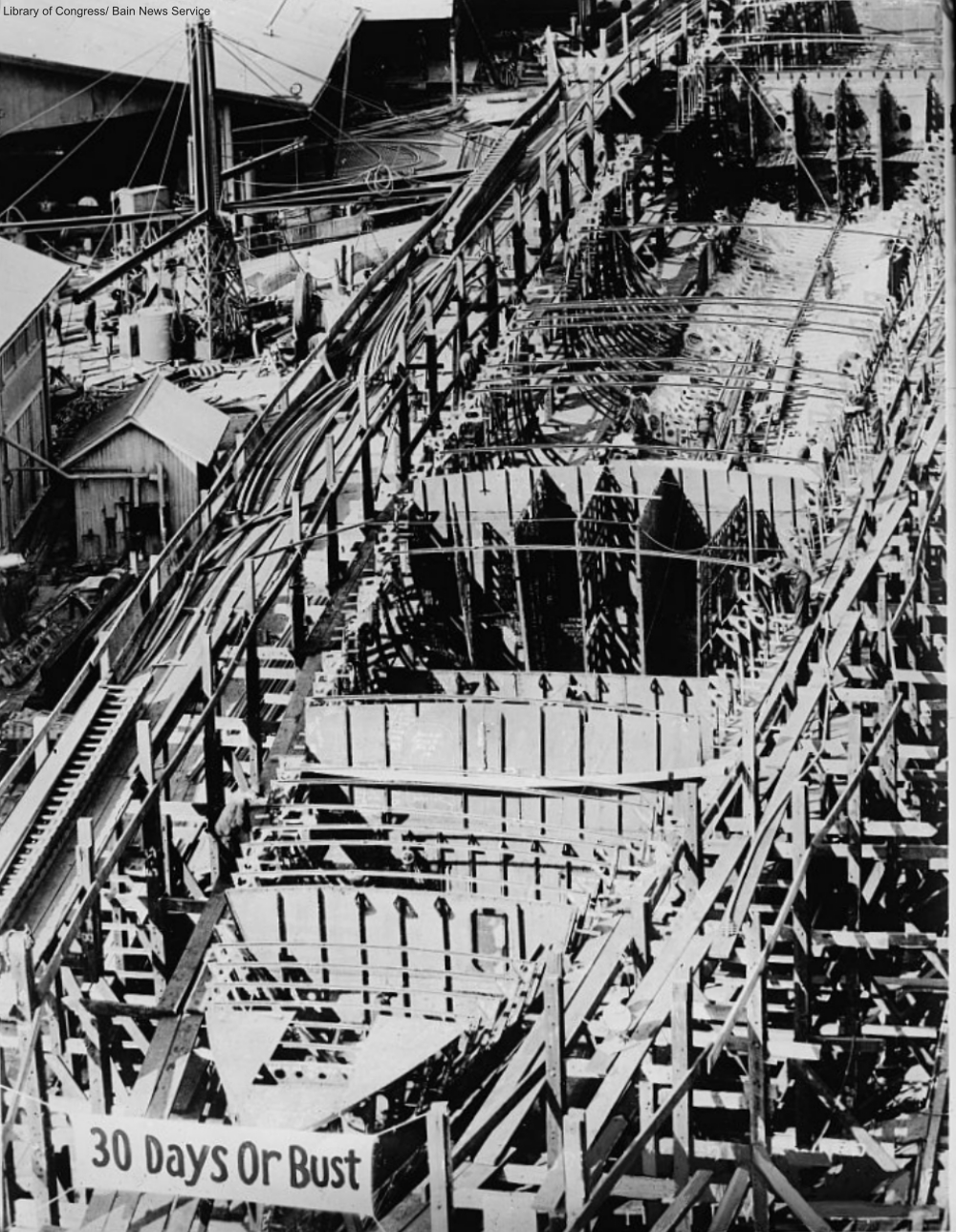 “Ward” the Destroyer ship being built at Mare Island Navy Yard 1918. Image via/ Library of Congress

With trench warfare battles lasting months, soldiers were compelled to settle in and create some sort of ordered lives for themselves amidst the destruction. 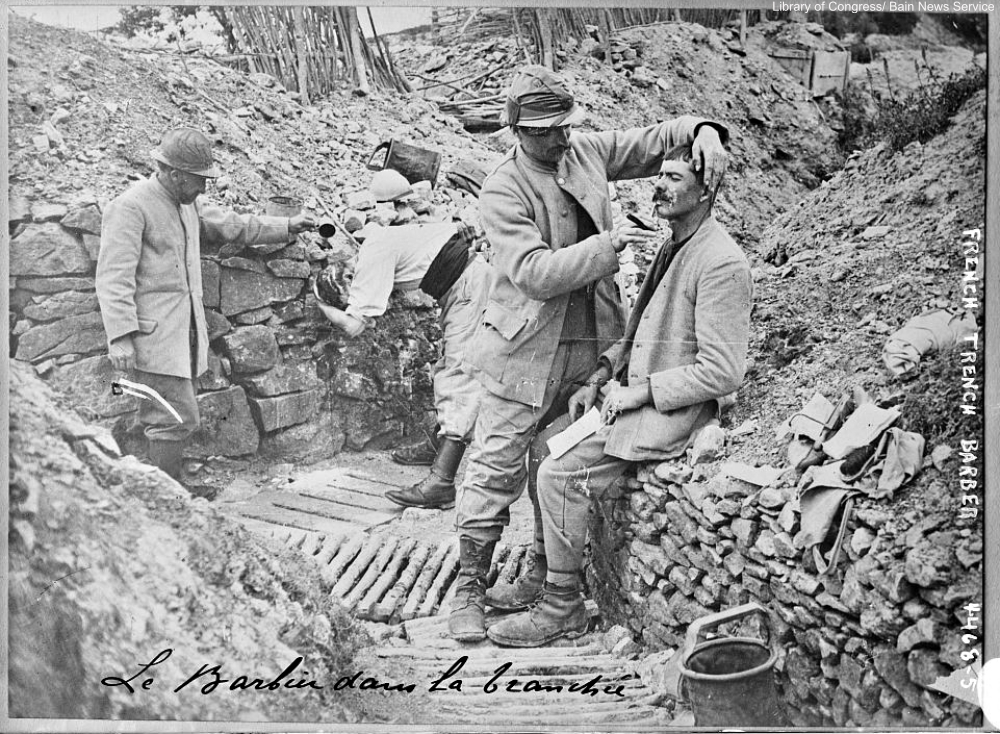 Barber in the French trenches WWI. Image via/ Library of Congress

Fought from February 21 to December 18, 1916, the Battle of Verdun was one of the bloodiest battles of WWI. The German attack on northern French soil didn’t go as quickly as they had planned. With each side reacting quickly, the tactics that each used were soon frayed. The small town of Fleury, among the nine towns destroyed by the fighting, changed hands sixteen times in only three months. The total number of casualties between French and German forces is estimated at over 700,000. Due to the high levels of arsenic from exploded and unexploded shells and dangerous conditions, the area where Verdun took place has never been rebuilt and clean-up crews still search for unexploded munitions to this day. The soldiers in the soil there will never be counted and so the casualty numbers remain estimates. 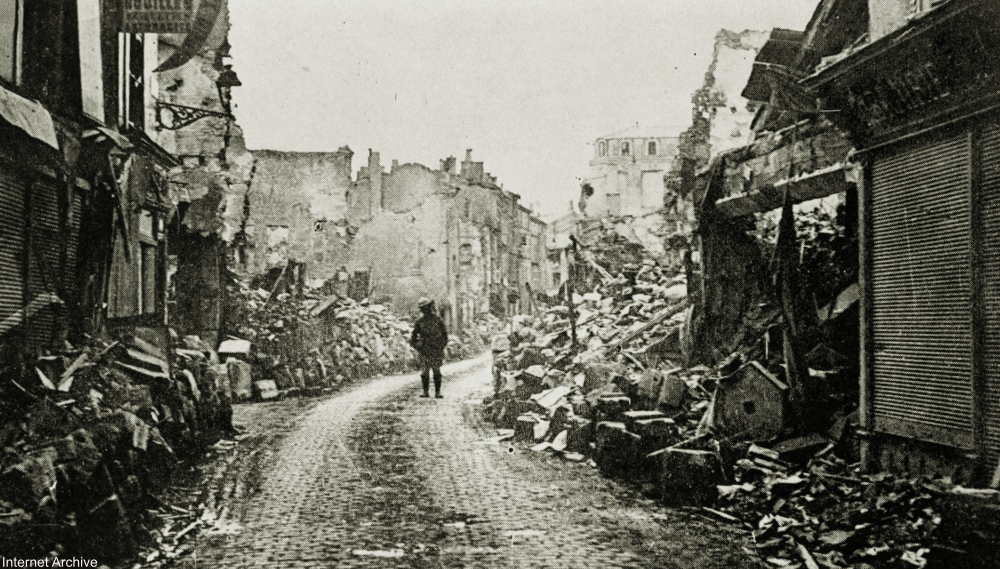 Damage incurred during the the Battle of Verdun. Image via/ Internet Archive 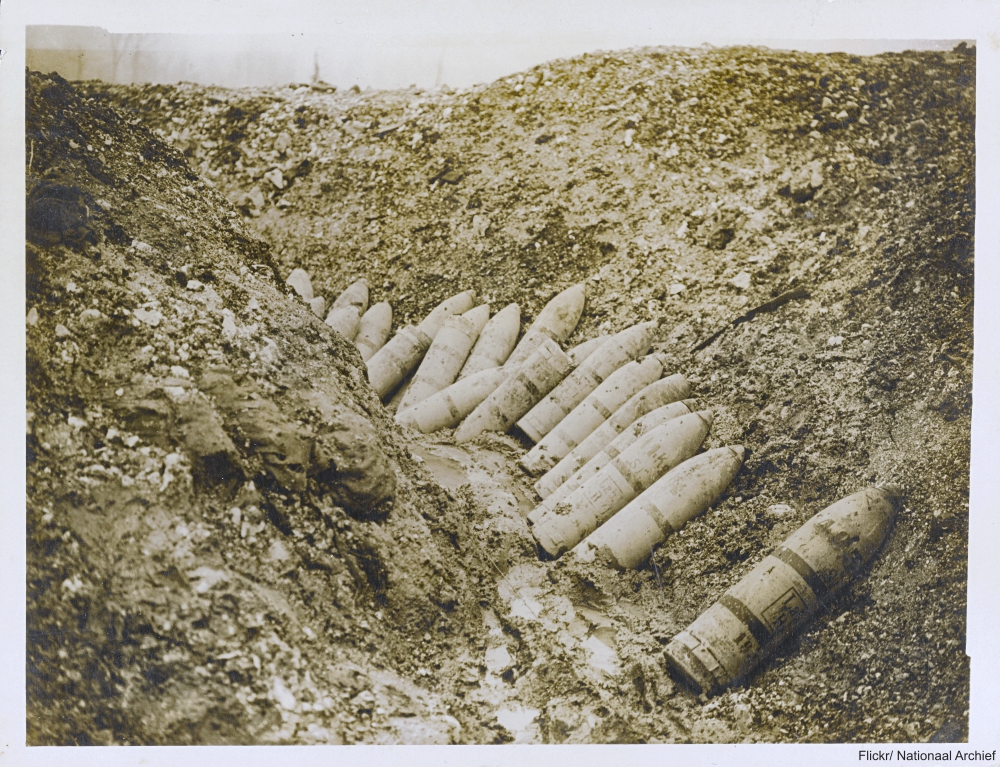 Unexploded German ammunition left in a trench in France. Image via/ Flickr

The war began to turn in our favor as the Hundred Days Offensive turned German troops back past the Hindenburg Line and enabled Allied forces to take over 100,000 German troops as prisoners. 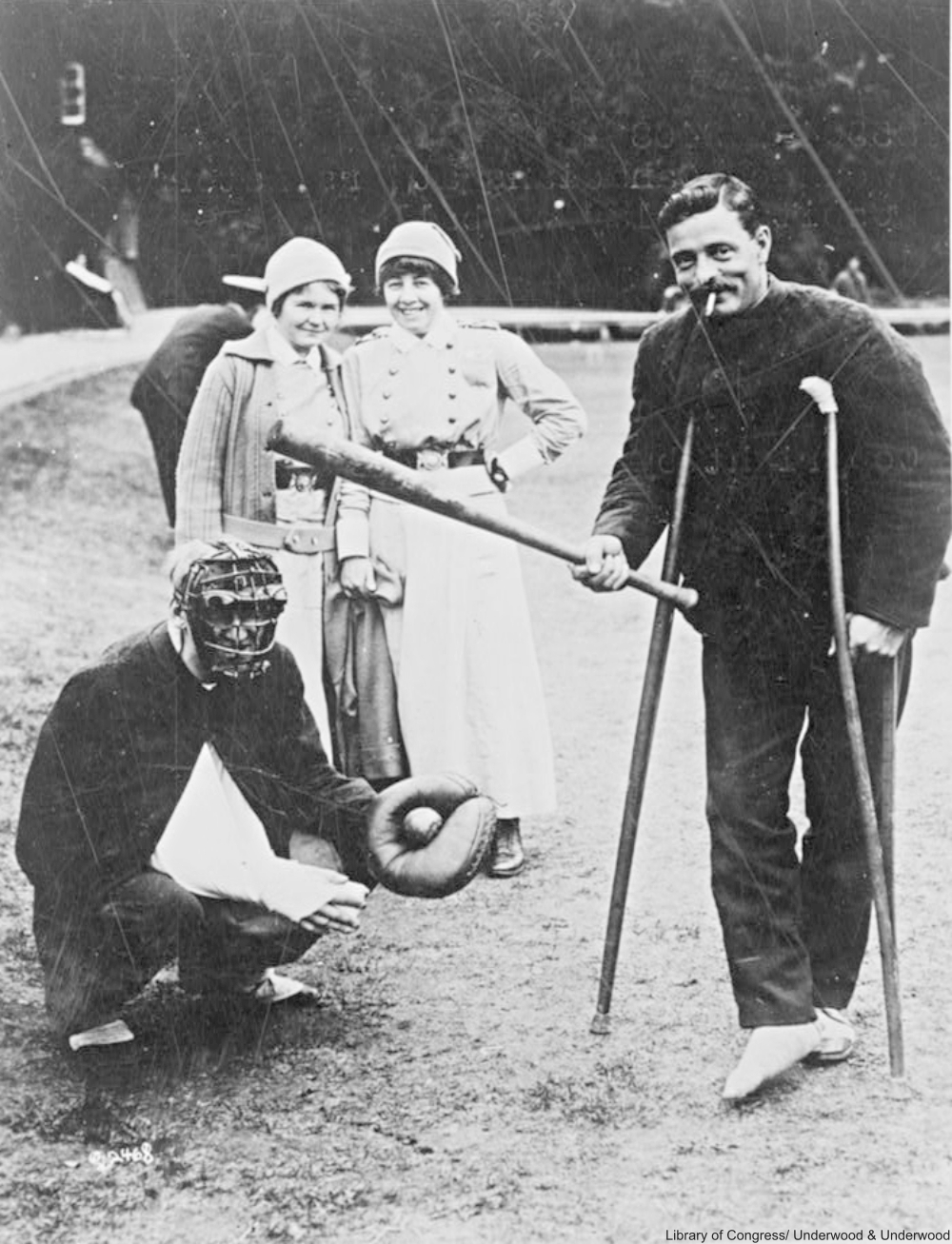 Crowds erupted on Armistice day, Nov 11, 1918. Four years of fighting across the globe, but only one year of U.S. soldiers going into battle, and we were ready for victory. Never in modern time had so many lives been entangled together in such a gruesome war. 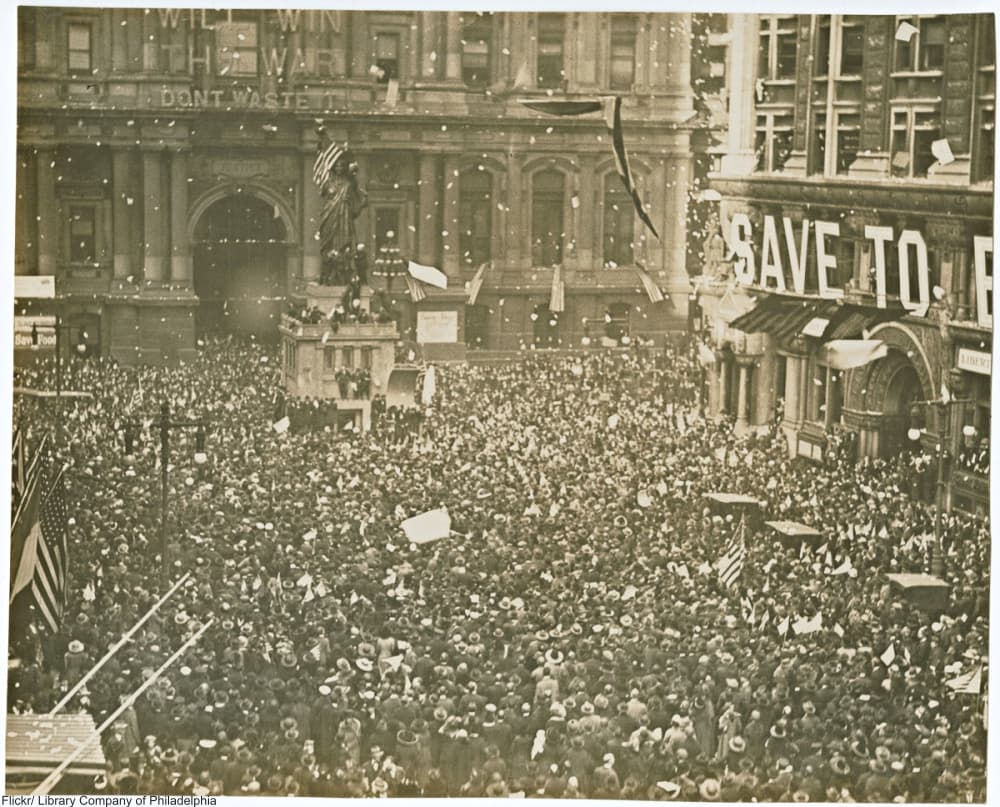 “First news of peace” Armistice Day Celebrations in Philadelphia 1918. Notice the partial view of a “food will win the war” sign. Image via/ Flickr 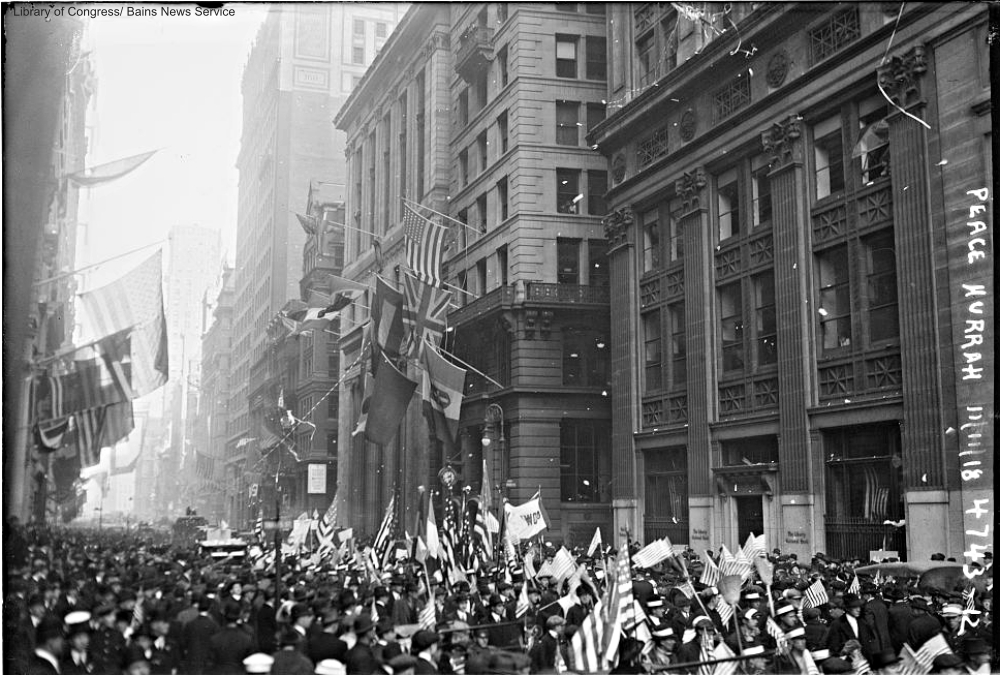 1914 to 1918 was a period that lives on through these amazing images and through the stories of those who were there. So many inventions and practices came from WWI and they have absolutely shaped what our nation and our world has become. These old photographs tell the stories of resilient people, who could still keep a sense of humor and hope during a time of such conflict.