32 years before the Ninth Avenue line was extended to be part of a new official subway line in New York City, the first ever subway car in the city was being ridden by passengers. In 1869, a wealthy inventor named Alfred Ely Beach had a novel idea for simplifying travel within the city. Inspired by the experimental steam-powered subway cars in London, Beach began designing his own version. 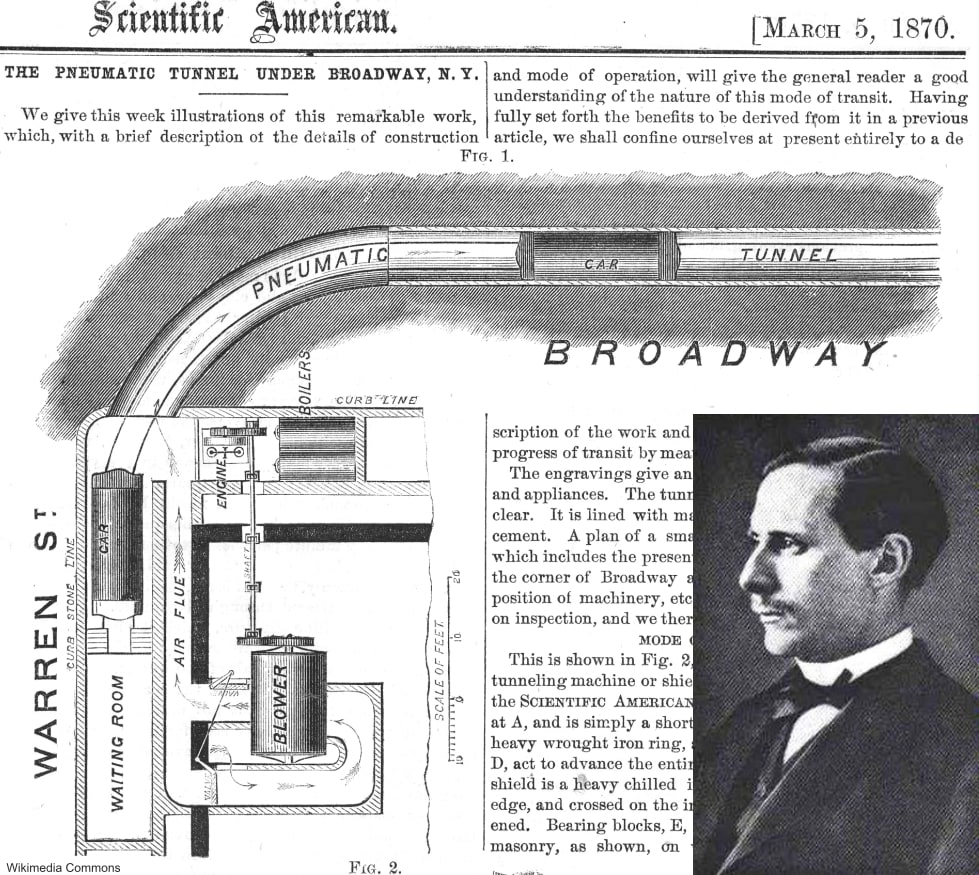 Alfred Ely Beach (inset) and his pneumatic subway diagram from Scientific American magazine which he owned at the time. Via/ Wiki Commons

As an “improved method of receiving and delivering letters,” the plans for Beach’s new subway system were cloaked in the concept of speeding up mail delivery. In fact, what Beach wanted to do was keep the streets cleaner by allowing for human transport underground. 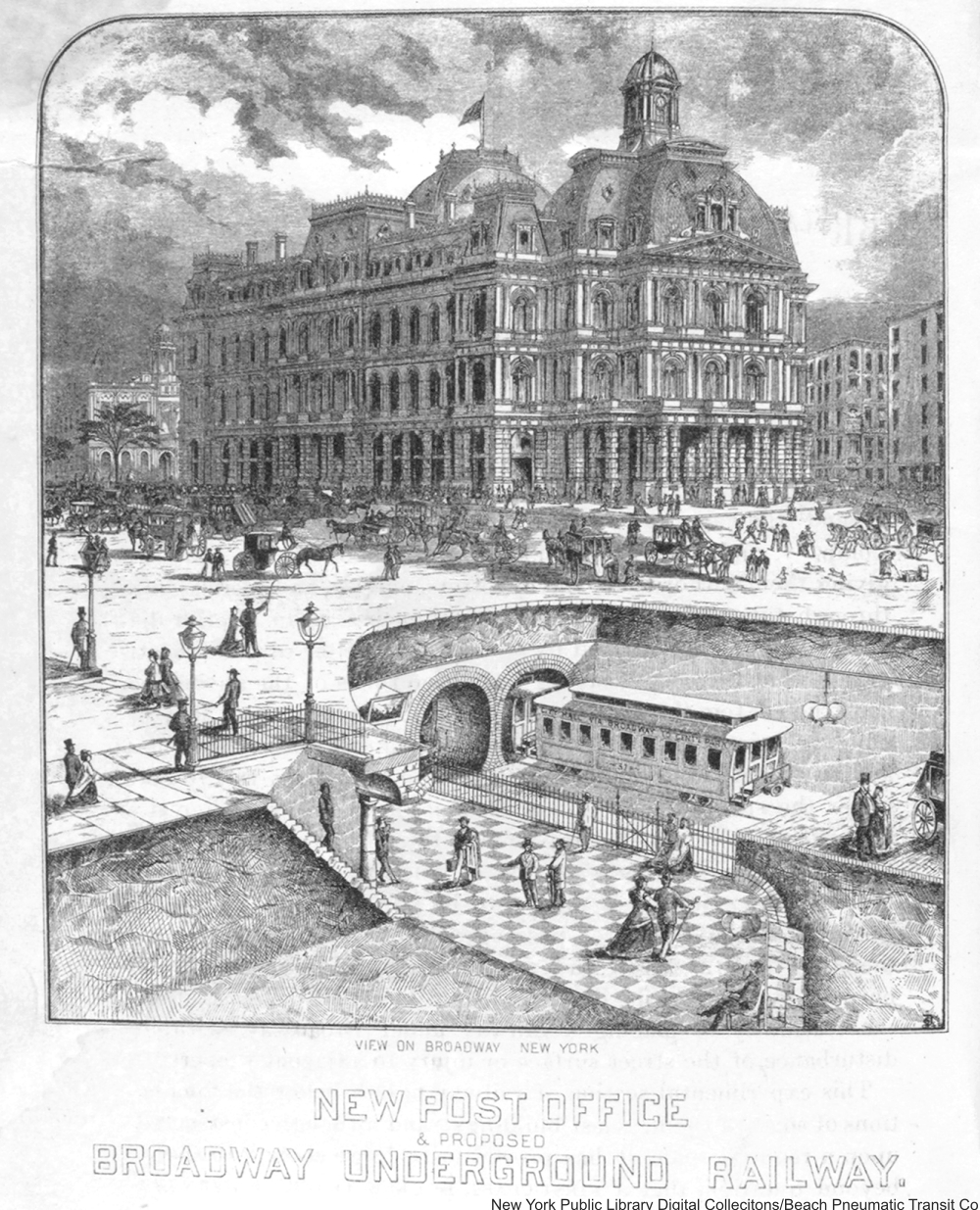 Unlike the steam technology so many other trains relied on, though, Beach’s new idea was to use pneumatic tubes to move a cylindrical car from point A to point B. We may wonder what made Beach think of this novel design, but Beach was constantly coming up with new inventions- some of which are still used. For instance, Beach invented a typewriter for the blind and a system for heating water with solar power, the latter of which you can still purchase today. Beach first publicly demonstrated his concept at the 1867 American Institute Fair, but there had been English inventors who had also proposed pneumatic means of transport. 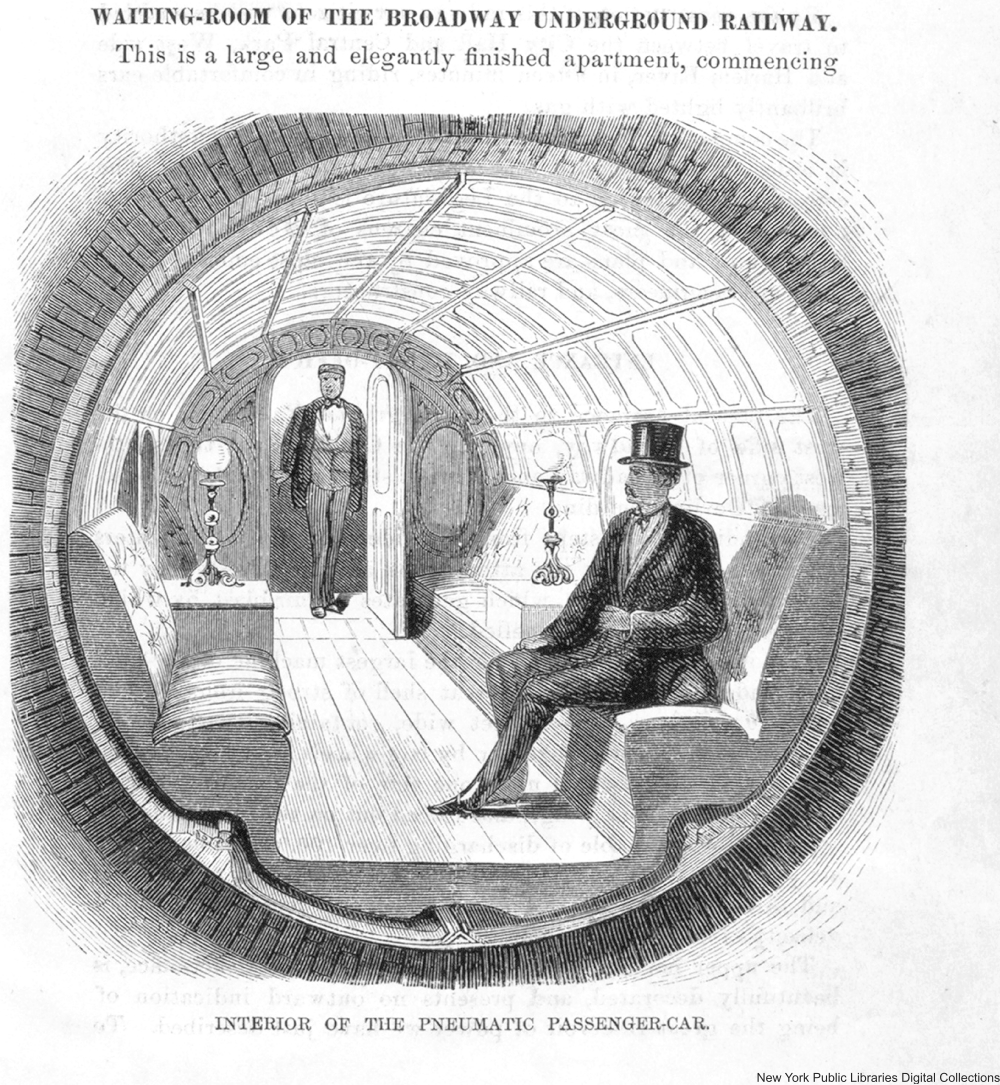 In order to get the permits to build this technical wonder, Beach had petitioned the crooked “Boss” Tweed, who had self-appointed himself as deputy street commissioner. Technically, Beach had built his subway as merely a mail delivery service. But, Beach publicized his creation and soon the public was taking rides on this technical wonder. The controversial line was quite luxurious, with space for 22 or more passengers. The waiting room was decorated with frescos and lamps, and even a goldfish pond. The car ran for one block between Warren and Murray along Broadway before dropping passengers off and reversing course. In the first 2 weeks, the “ride” sold 11,000 tickets.

When it came time to expand his line and propose officially opening this travel to commuters, Tweed was no longer a help, having his own interest in the new elevated train lines which were also competing for government approval and funds. There is a parallel theory that states concerns about a massive tunnel underneath Astor House were to blame for poor public and financial support. Yet another line of thought is that the Panic of 1873 made politicians weary of investing in anything risky. Eventually, Beach’s subway system was destroyed to make way for the subway system which NYC relies on today. 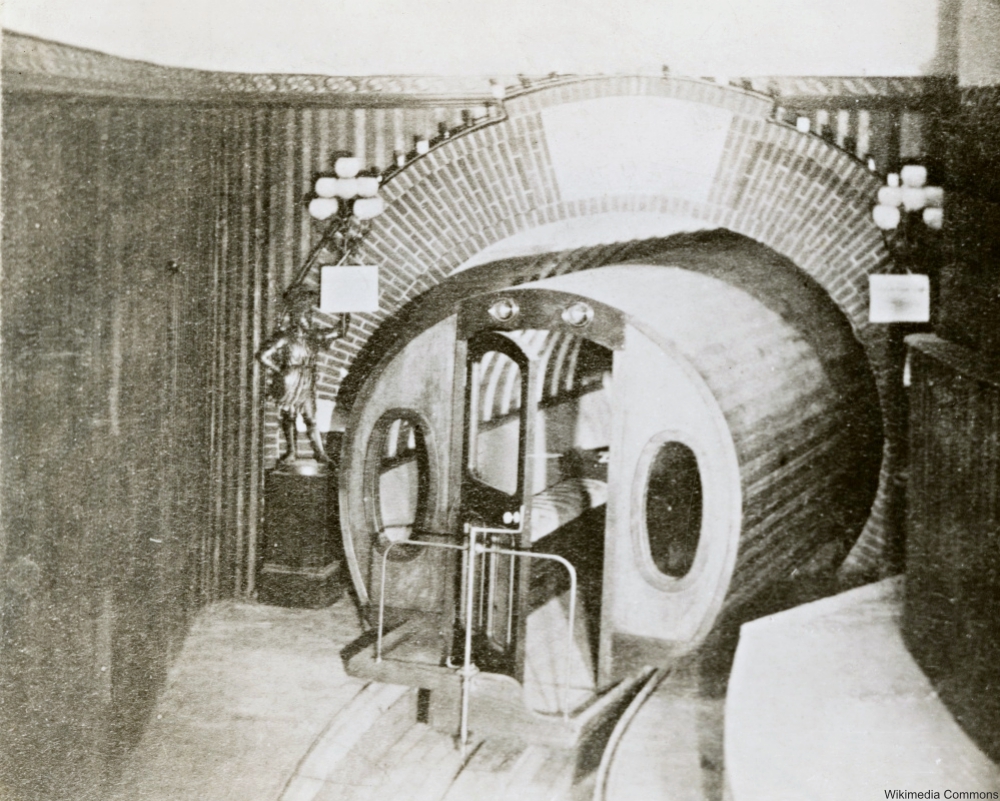 It’s hard to believe that this was the first design for New York’s subway. A far cry from the industrial and dirty subway cars and platforms of today, this elegant space was clearly an ambitious plan for a city as large as New York. But, it’s interesting to know that, had things gone differently, the trains in New York might have been quite different. If you loved this story then check out the year without a summer right here.