After having been at war for years, the world rejoiced when V-E Day was declared on May 8th, 1945. Victory in Europe was the first huge step in winning the World War II. But, the Japanese were still holding out and it wasn’t until September 2 of that same year that the war was finally, entirely, over. The day that the Japanese surrendered, crowds jumped for joy, drank a bit too much, and generally went wild in the streets. It meant the end of rationing, of fighting, and the loss of life was finally over.

In Times Square, that celebration was eruptive and famous photos of the event condensed all those feelings into one image: a sailor fervently kissing a nurse as people walked in every direction and shouted their happiness. 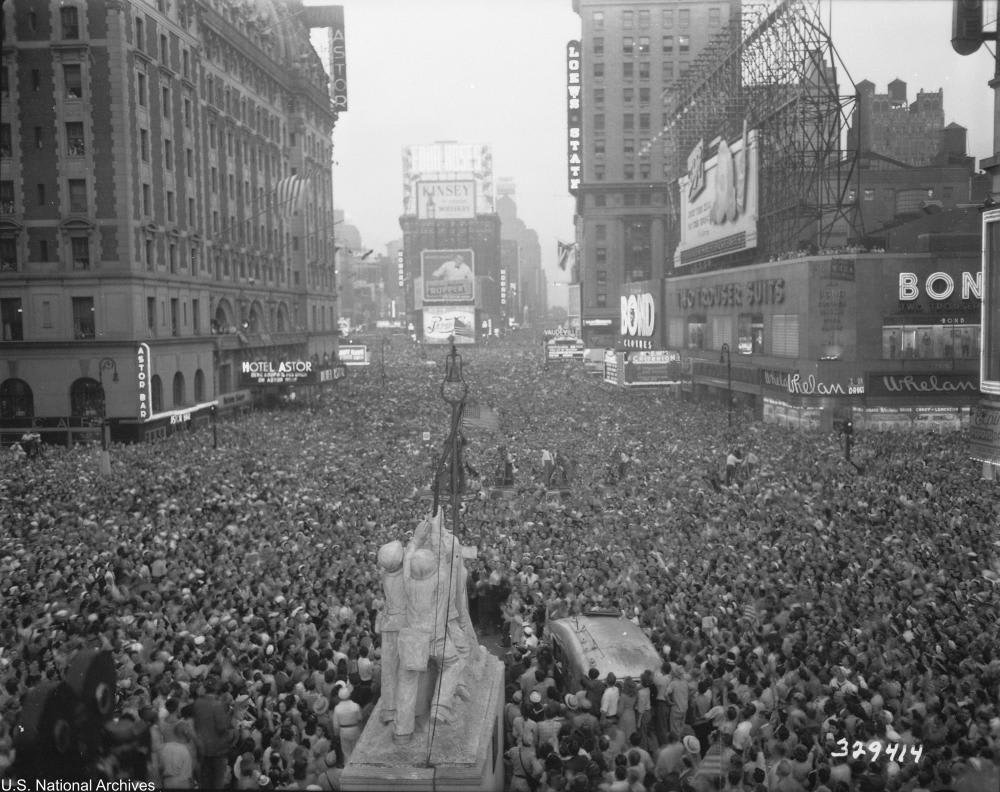 The man in the photos is George Mendonsa, a sailor in the Navy who had just come out of a Radio City performance to find the city of New York embroiled in joyous celebration. Mendonsa grabbed a nurse that was walking the opposite direction and gave her a smooch. He later claimed that he was “celebrating the end of the war and a few drinks. I didn’t know who the hell I grabbed. I knew she had the uniform.”

While many people have come forward to claim that they were in the scene, Mendonsa matched the scars, hand size, and facial features, according experts at the Naval War College. 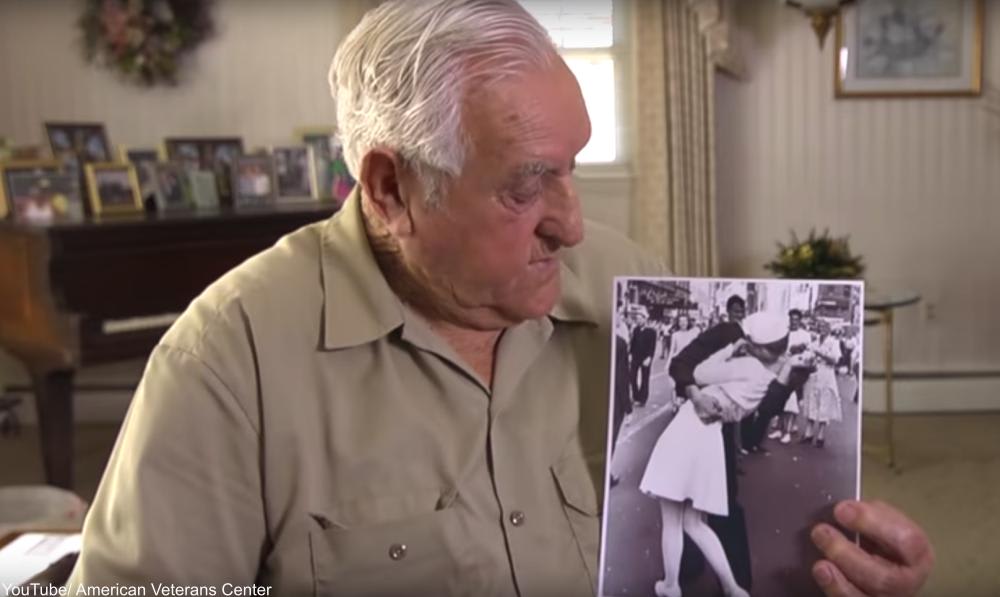 Mendonsa in 2015 holding a framed copy of the Eisenstaedt version of the moment. Via/ YouTube

According to Mendonsa, the kiss happened on his last of day of leave before heading back out to war while taking his future wife on a date. After having witnessed the courage of the nurses aboard the hospital ship USS Solace after the attack on the USS Bunker Hill in May of 1945, Mondonsa had a new respect for them. He said that he never would have kissed her had she not been in uniform.

Mendonsa served for two years in the Pacific Theater before being sent home in July of 1945 on leave. 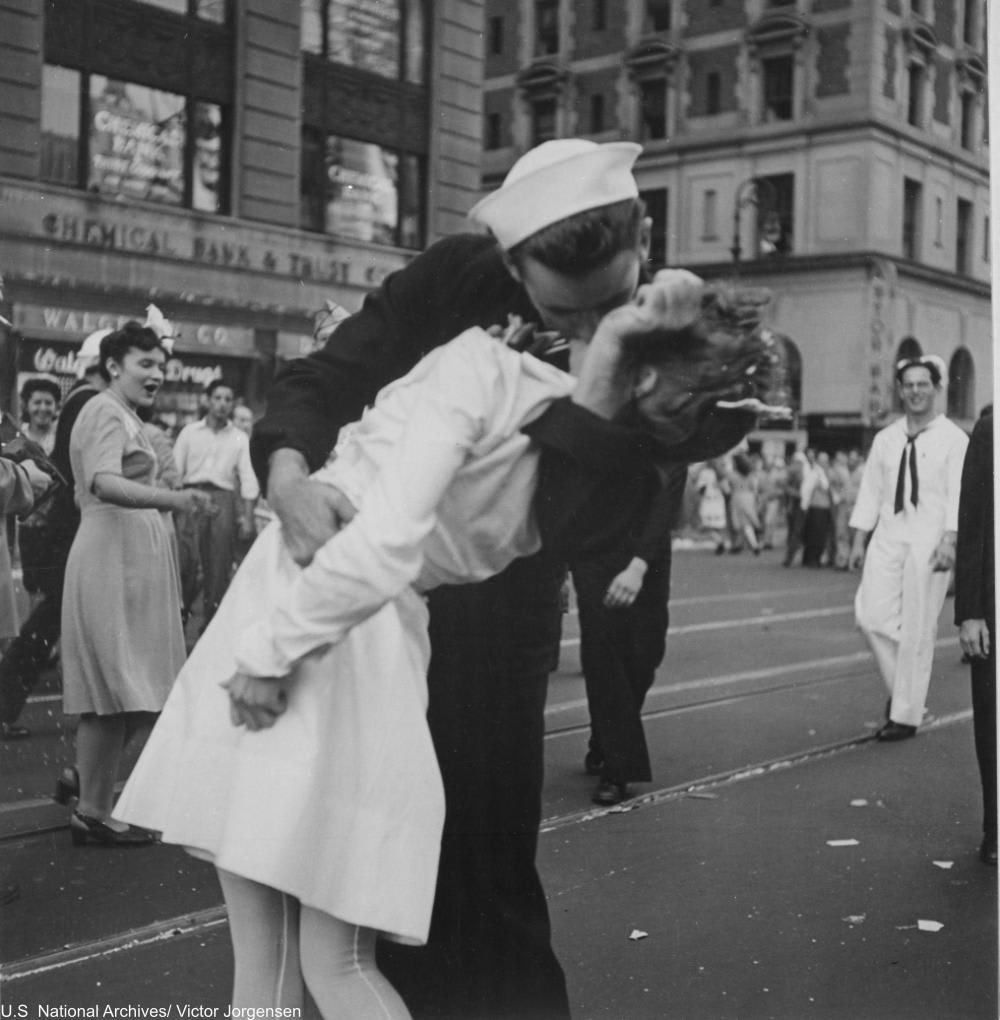 U.S. Naval photograph by Victor Jorgensen with original caption of “New York City celebrating the surrender of Japan. They threw anything and kissed anybody in Times Square.” Via/ U.S. National Archives

However, one version of the photo, titled “V-J Day in Times Square” was taken by Alfred Eisenstaedt who claimed that the male subject was kissing every woman in sight. What ever the truth the photo was captured from two angles and some of Eisenstaedt’s shots of the scene include Rita Petrie, who seems amused at his drunken behavior. The two were married for 70 years.

Mendonsa died Sunday, February 17th, 2019, in an assisted living facility in Rhode Island after having suffered a seizure. Mendonsa was retired from being a fisherman, a profession which had been traditional in his family. While food producers were often given deferment from the draft during World War II, Mendonsa gave up his chance to stay home and enlisted in 1942 at the age of only 19.

Mendonsa was just 2 days shy of his 96th birthday and is survived by his wife and two children. Greta Freidman, the nurse in the famed image, died in 2016. Hear Mednonsa’s account of the war and of that fateful day in Times Square in the video below.