He is one of the most well-known symbols of our country, mentioned in countless songs and works of fiction, and invoked by millions of servicemen. Uncle Sam has a long history of representing the nation. But, it was only in the 20th century that this icon had a definitive face. The story of how Uncle Sam came into being is one shrouded in mystery and veiled in conflicting folklore. 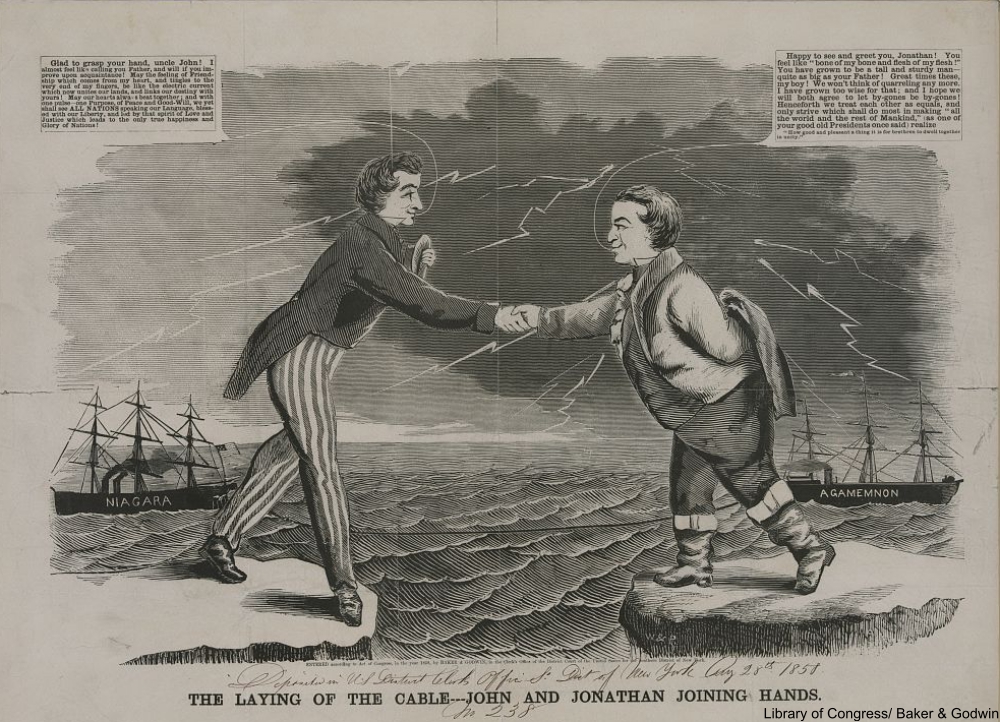 Engraving of Brother Jonathan and Britain’s emblem John Bull produced in 1858 in honor of the first Transatlantic cable. Via/ Library of Congress

During the Revolutionary War the term “Brother Jonathan” came into use as a personification of the U.S. The origins of this character are murky, with some accounts placing Jonathon Trumbull at the center. Trumbull was the only colonial governor to side with the patriots in the days leading up to the American Revolution. Other theories center around the derogatory British term Jonathan that was given to Puritans which was then applied to Americans.

Brother Jonathan was distinctly a New Englander and was often depicted as being of poor temper, wanting to close ranks around Catholics and immigrants, and even sometimes as trickster. It’s no wonder that with the Civil War dividing the country and Western expansion creating a new set of American identities that a less controversial character would overtake him in popularity.

After the War of 1812 the term Uncle Sam began to be used alongside Brother Jonathan, the two terms becoming interchangeable during the mid-1800s. Some proffer that Uncle Sam was an invention of soldiers during the war of 1812 praising their meat rations stamped with U.S. and one supplier was “uncle” Sam Wilson. However there are historical accounts of the term being in use before Wilson contracted with the U.S. Most notably a journal entry 1810, 2 years before the war began, penned by Isaac Mayo. 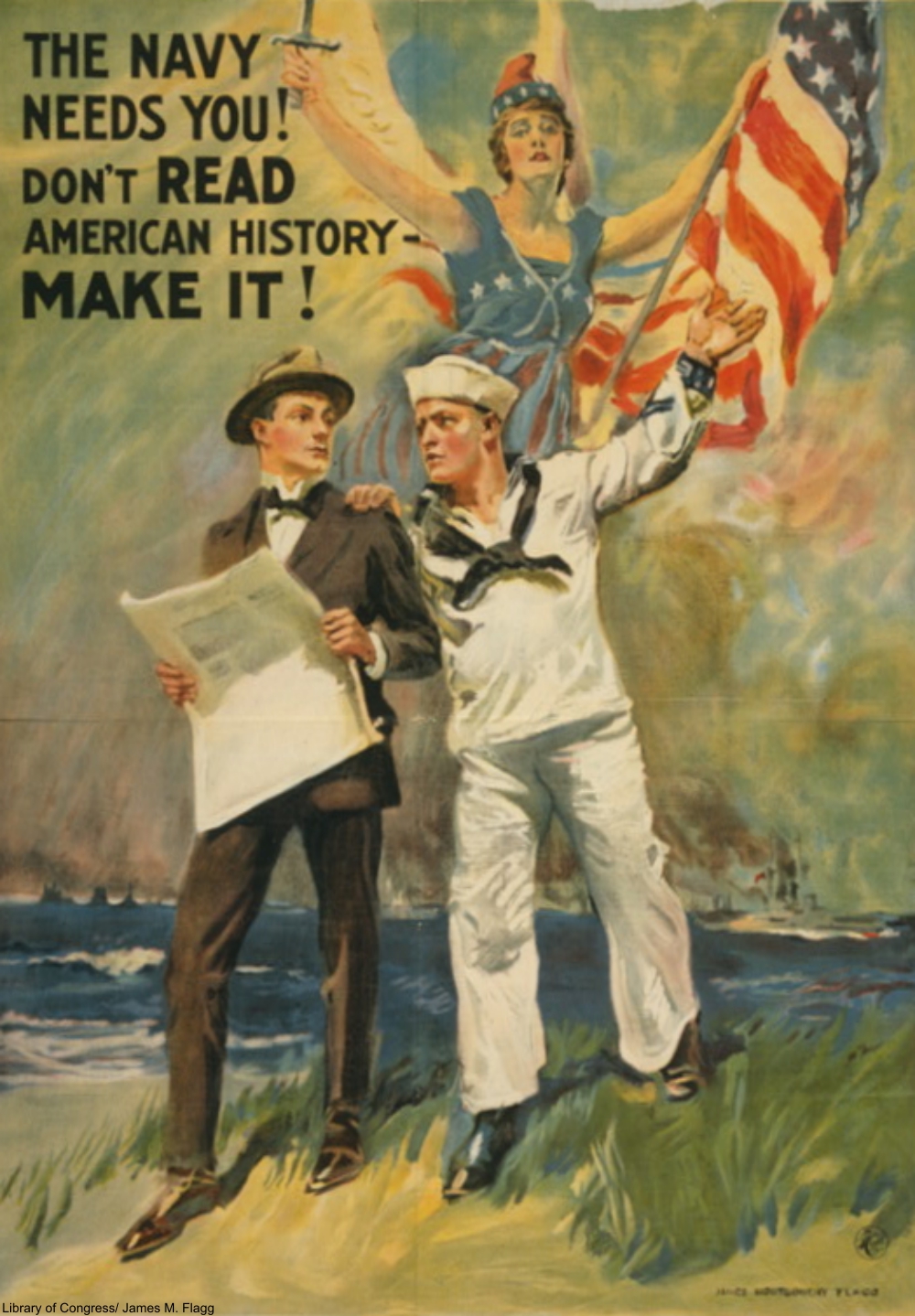 Columbia hovers over two men in a WWI recruitment poster designed by James M. Flagg in 1917. Via/ Library of Congress

In the 19th century the personification of the country could also be found in the goddess Columbia, though her position fell into decline due to a number of factors: the growing popularity of Uncle Sam, the Statue of Liberty, and the the image eventually used to represent the Columbia film company.

There are many depictions of Uncle Sam over the years, including a surprisingly cavalier and young Uncle Sam who was pro-Union during the Civil War. This music sheet cover shows the inventiveness of artists across the country: Sam did not have one face. Indeed, while often depicted in stars and stripes clothing, Uncle Sam was portrayed in various outfits. 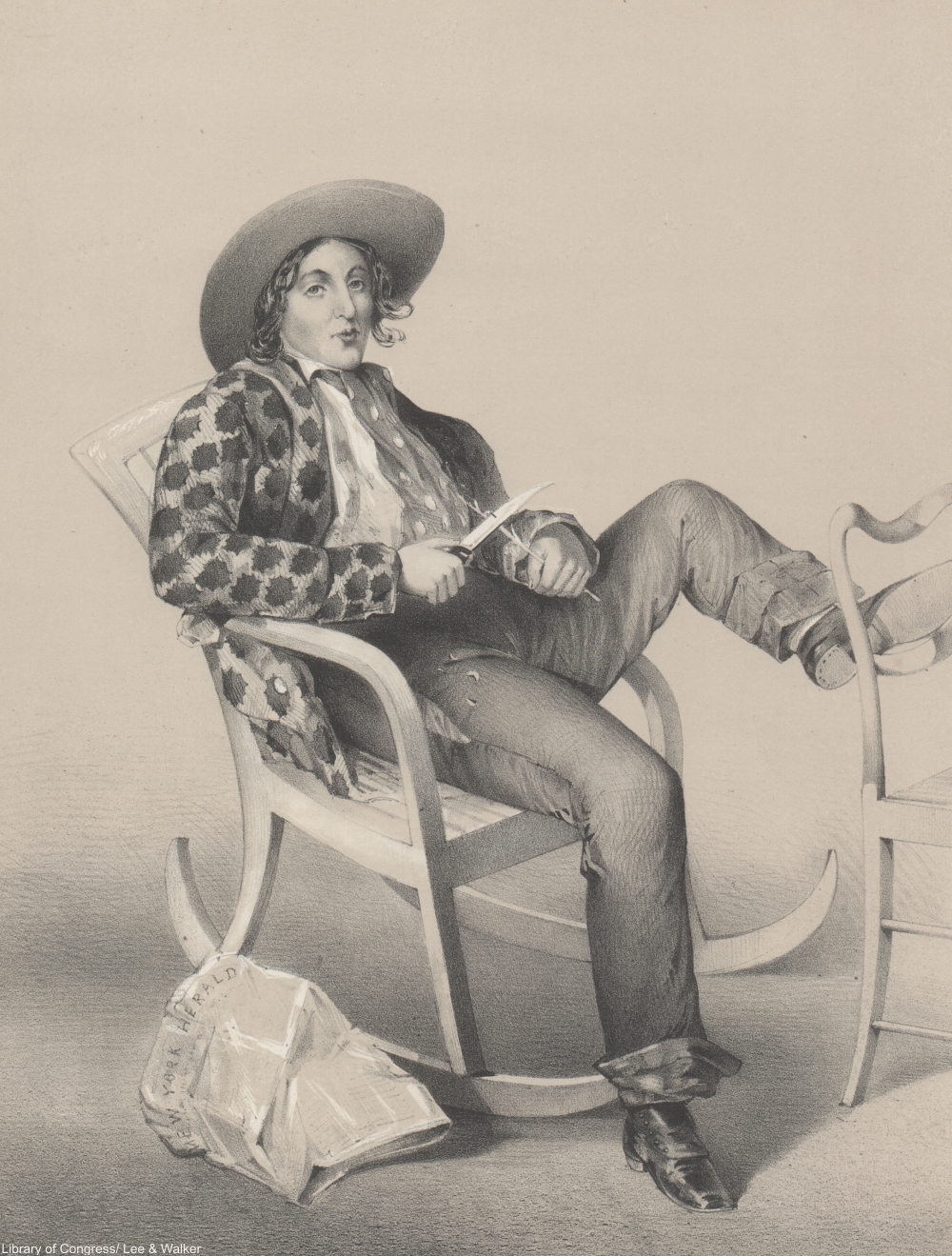 The Uncle Sam we know today was an image created by artist James Montgomery Flagg during World War I for enlistment and morale posters. Flagg’s depiction of Uncle Sam was also used in campaigns aimed at getting citizens to buy war stamps, something like war bonds but available at much lower prices. 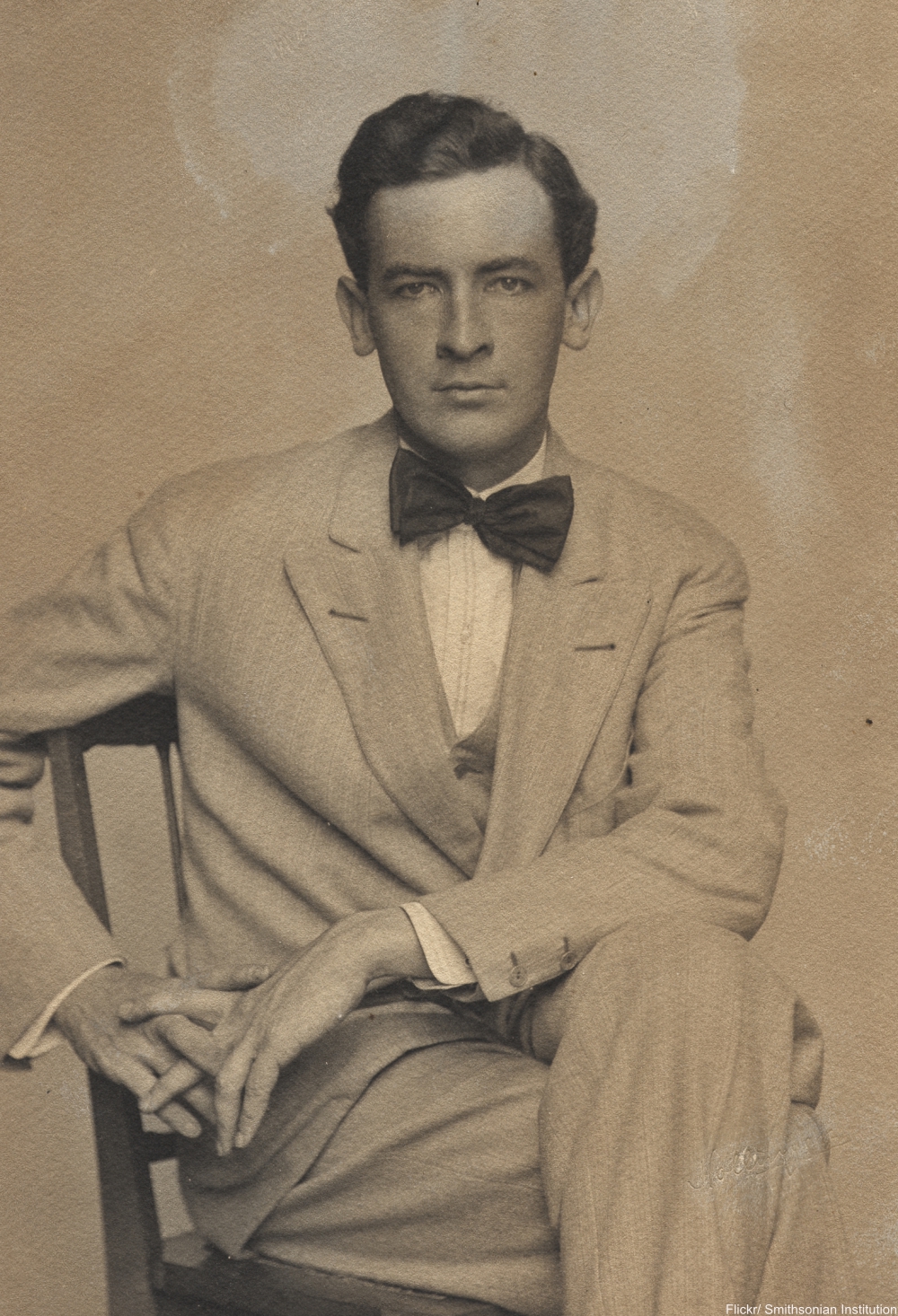 During World War II the famous “I Want You” poster was again used in campaigns to boost military enlistment. By this point the image had come to symbolize the nation in ways that no other fictional character had before. The bushy eyebrows, long arms, stern look, and white top hat were unique and imposing. It’s not an image one quickly forgets. 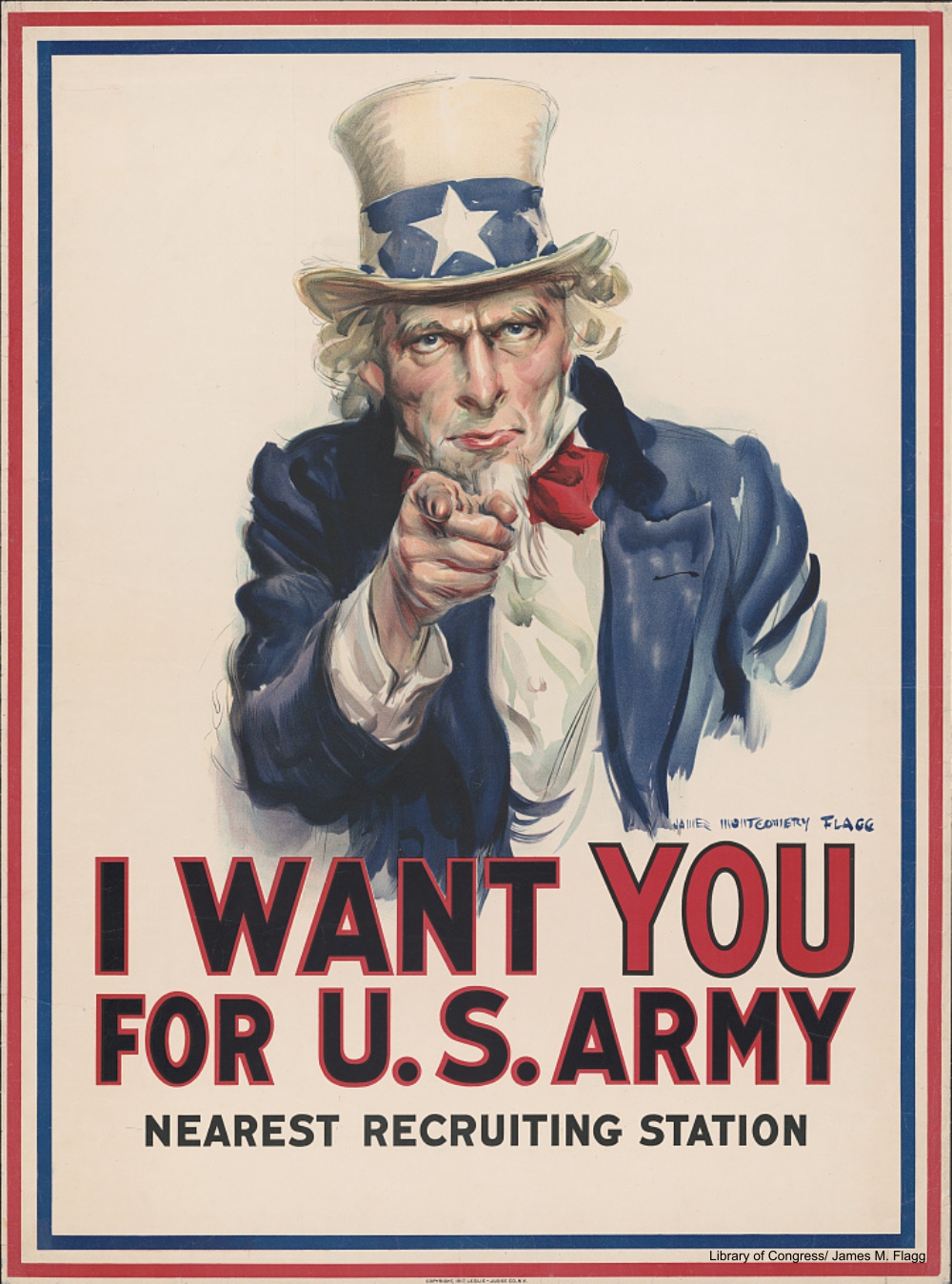 The most famous image of Uncle Sam. Via/ Library of Congress

There is one version of the history in which an enlisted man modeled for Flagg, one Walter Botts. Another version has Flagg using his face as the model, adding years by making the hair white and adding a long white beard and bushy silver eyebrows. Yet another version has Flagg mixing his own facial features along with Botts’ to create the now legendary poster which has been the face of the country for generations.

We may never know the true history behind each of these icons and images. What we do know is that the quintessential patriotic symbol, for many of us, will always be the image from Flagg’s iconic Uncle Sam poster.

Click here for a look at the real Rosie the Riveter!