A League Of Their Own Cast, Today 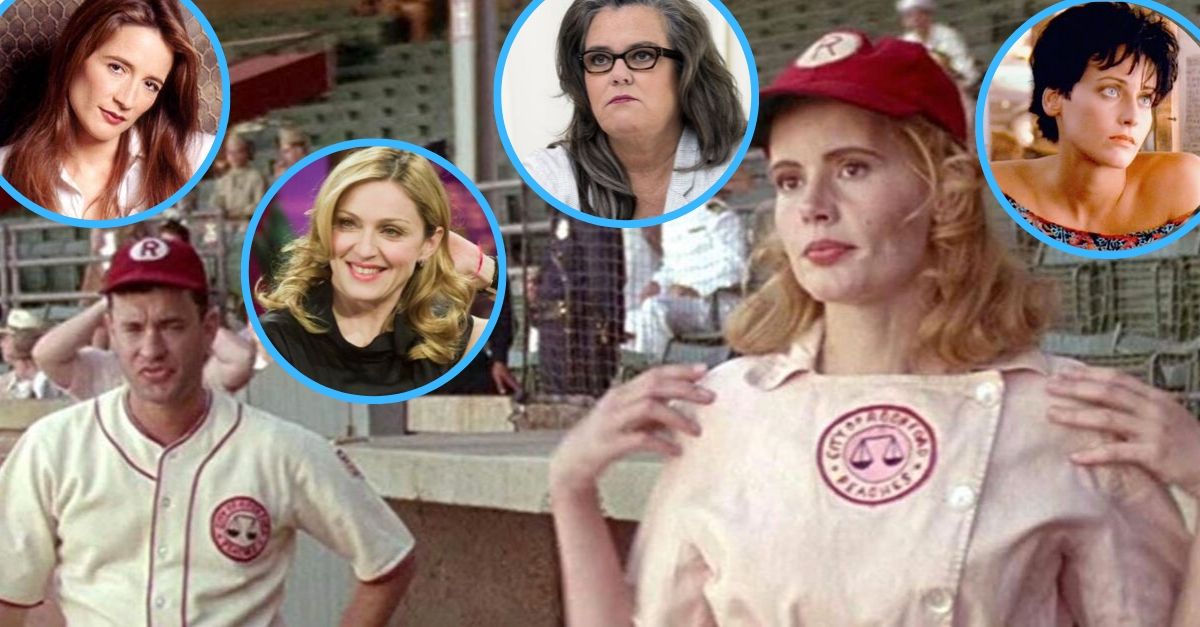 A League of Their Own cast established a legacy / Broadway.org

The 1992 sports film A League of Their Own gained fame for its portrayal of the World War II era All-American Girls Professional Baseball League (AAGPBL). Though an adapted comedy-drama hybrid, its cultural impact landed the film a spot for preservation in the United States National Film Registry by the Library of Congress. The reasoning resided in it being “culturally, historically, or aesthetically significant.” No masterpiece is possible without the team behind it, and the A League of Their Own cast continued paving their way to greatness after the film.

The cast and crew helped A League of Their Own finish second behind Batman Returns on its opening weekend. While some would tell you “there’s no crying in baseball,” such an accomplishment is worth tears of joy. The solid performance by the cast is most often cited as the best feature of the movie, but the cast’s successes did not end there. 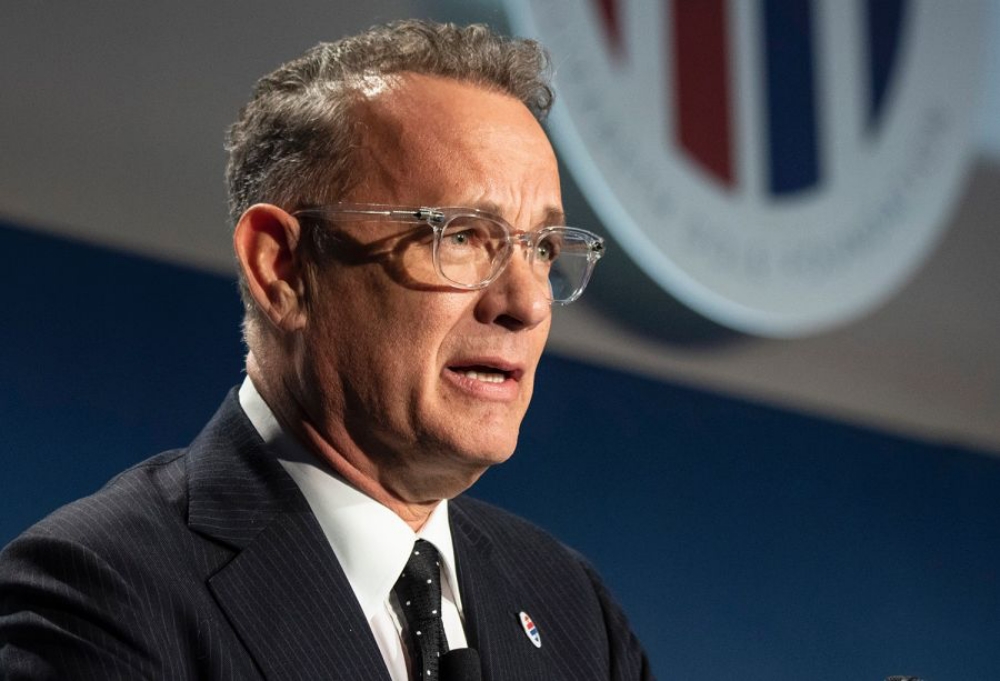 Nicknamed in real life as “The Beast,” the actor behind Jimmy Dugan in the movie is anything but. Tom Hanks portrayed the manager of the Rockford Peaches who starts off not caring about his job. In contrast, Hanks the beloved actor takes his career very seriously. After A League of Their Own, he went on to star in major iconic roles. Younger audiences will recognize his voice as that of Sheriff Woody from the Toy Story series. He helped bring Dan Brown’s divisive book The Da Vinci Code further into the spotlight with his portrayal of symbologist, Robert Langdon. Hanks also collaborated with Steven Spielberg on Saving Private Ryan. His role in Forrest Gump would earn him a People’s Choice Award for Best Actor.

Outside of acting, Hanks has become involved in activism. He uses his money to contribute to the various causes he supports. He has taken the topic of veteran care to heart. Hanks is a campaign chair of the Hidden Heroes Campaign of the Elizabeth Dole Foundation. The foundation aims to make caring for veterans more effective. In 2016 Hanks received the Presidential Medal of Freedom. The actor is also set to receive the Cecil B. DeMille Award at the 2020 Golden Globe Globes. 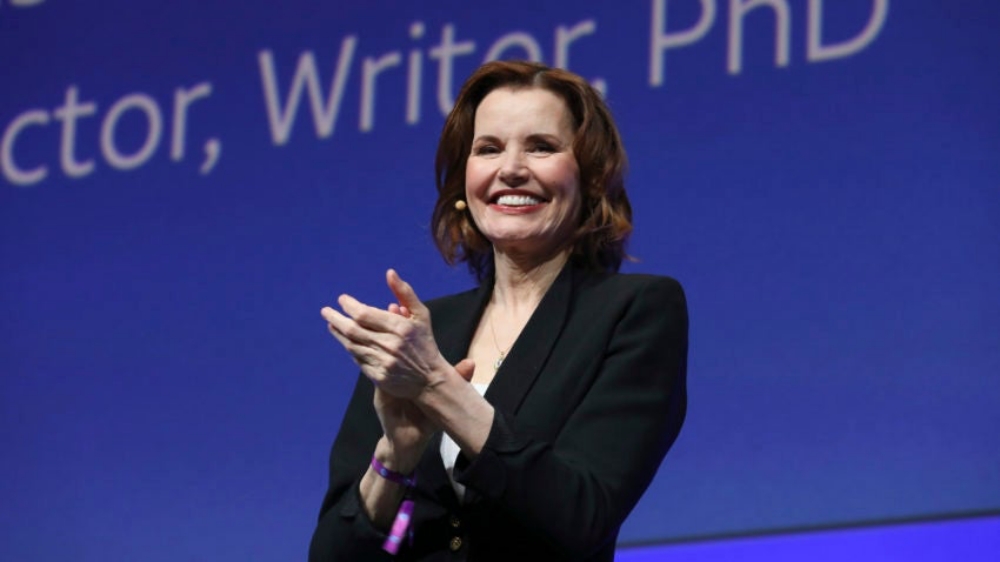 Geena Davis took her performance in the film as a strong athlete and role model for women to heart. As a catcher and assistant manager, Dottie is a major force in getting the momentum going for the AAGPBL. Recruiter, Ernie Capadino, desperately wishes to recruit Dottie, who starts off content where she is. She goes, however, to give her enthusiastic sister a chance to thrive in the sport. When photographers want to see something remarkable, Dottie is able to catch a baseball while doing a split.

Davis made her own life as remarkable as Dottie’s. She starred in Tootsie and The Fly, the latter of which became a box office hit. Her role in Thelma and Louise would cement her as lead material. Davis has received a Golden Globe for Best Actress and several Academy Awards and nominations. Her sports action does not stop behind the camera. She is a supporter of the Women’s Sports Foundation and advocates for gender-based equality in sports. Davis and a handful of other celebrities were involved in initiatives to raise awareness of droughts in East Africa. Today she can be seen speaking out against gender biases permeating into modern media. This includes funding tech initiatives to research and insight gender parity in shows. 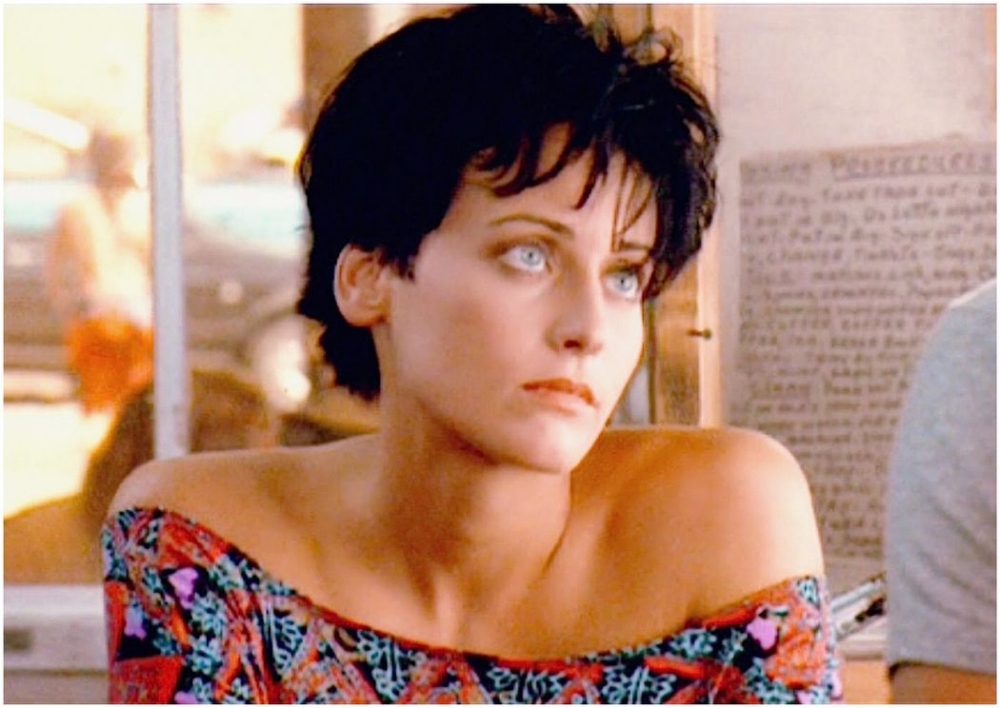 Kit Heller has a complicated relationship with her sister in A League of Their Own. This is to be expected from sisters who are teammates. Even on the same team, the competitive spirit threatens to drive a wedge between them. Dottie uproots her quiet life to help Kit be recruited for baseball. Still, sibling rivalry causes Kit to be traded to the Peaches’ rival the Racine Belles. However, they are able to reconcile after that and other hurdles.

These days Petty wears a very different kind of uniform. Petty starred in the Netflix classic Orange Is the New Black as Lolly Whitehill. She also appeared in Prison Break for the last episode of season four. Her acting career placed her in many iconic roles, often as a very strong female character. But her success extends beyond acting. Petty directed The Poker House. The movie, retitled Behind Closed Doors, outlined her difficult childhood. In the film, a teenager tries to raise her younger sisters despite a mother who neglects them. It went on to win several awards at the Los Angeles Film Festival. Not content with inactivity, Petty also contributed her talents to narrating Janet Evanovich’s Stephanie Plum series. 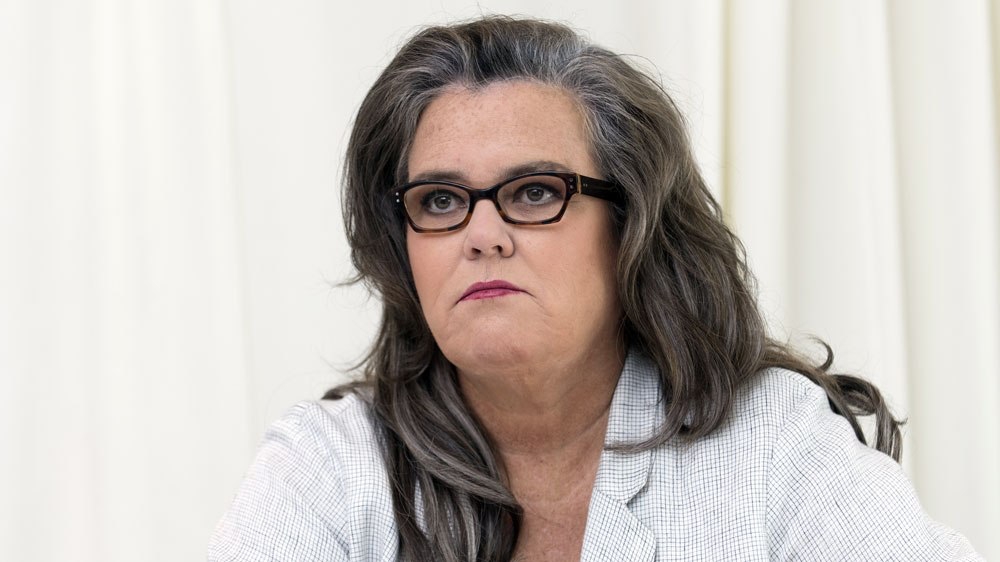 Rosie O’Donnell became a household name for her talents as an actress and comedian, which often went hand-in-hand. She gradually transitioned through roles of increasing significance. Eventually, she went on to call the shots on The Rosie O’Donnell Show. Work on the show from 1996 to 2002 earned her multiple Daytime Emmy Awards and gave her a platform for philanthropic efforts. When not acting, she spends her time writing. She has edited and written for books, blogs, and magazines. Issues of family are very personal to her.

In A League of Their Own O’Donnell plays bouncer Doris Murphy. But in real life, her philanthropic work makes her more approachable. She supports adoption rights and works to bring light to violence against women. A 2006 fundraiser gained 600,000 for her Rosie’s For All Kids Foundation. She has spoken at a Human Rights Campaign Gala and lent her performing talents to the “Any One of Us: Words From Prison” event. The goal of the occasion was to have performers use words and songs to highlight the relationship between violence against women and incarceration. O’Donnell still makes time for friends from the A League of Their Own cast, though, attending Madonna’s Madame X tour this month. 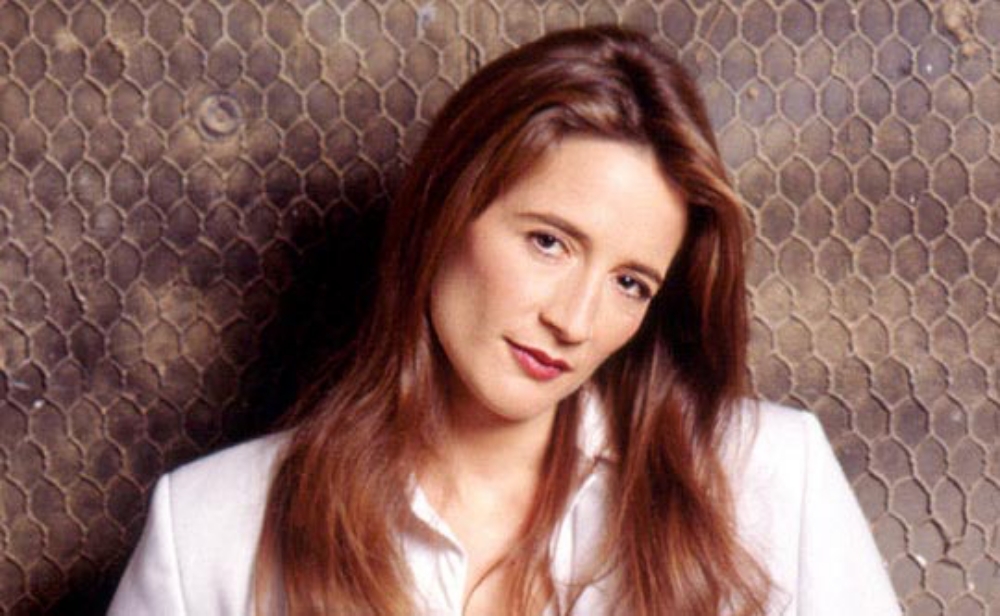 No sports film would be complete without a few physical injuries, unfortunately. Anne Ramsay experienced this when trying to catch a ball, she broke her nose on the mitt. Her character first baseman Helen Haley might have had an easier time with that on-screen, thankfully.

The bad luck did not follow Ramsay off the pitch. On the contrary, her work with the acting group The Continuum helped launch Ramsay’s career. Their 1987 production of Waiting earned acclaim and drew the attention of Ramsay’s first agent. The Los Angeles native has been nominated for a Screen Actors Guild Award since then. Soon, she shall get to experience a blast from the past. Spectrum Originals’ revival of Mad About You will feature Ramsay throughout the series. She is set to reprise her role as Lisa Stemple. 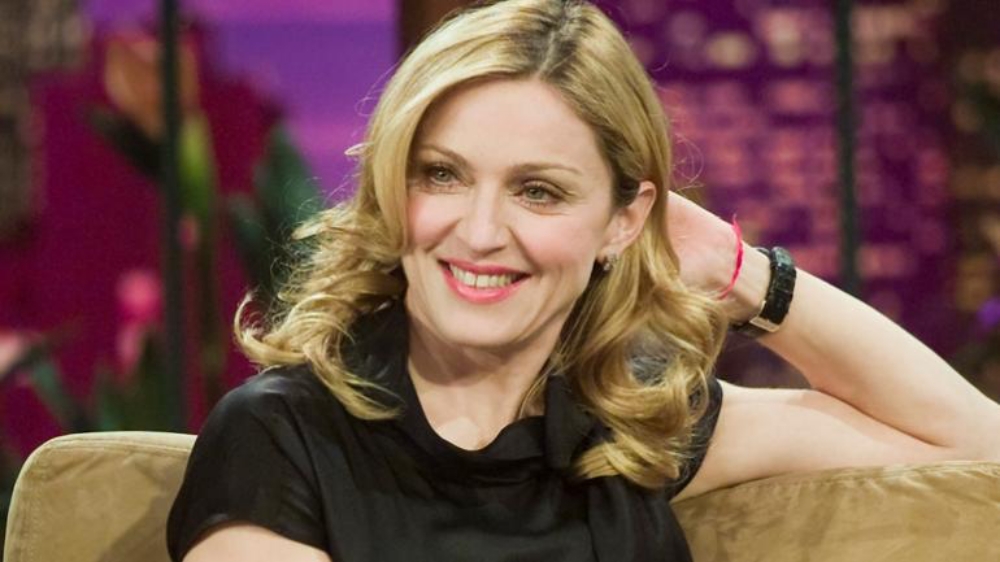 Known for her powerful singing and continued engagement with fans, Madonna’s character of Mae Mordabito was able to help make history. Taxi driver “All the Way Mae” was best friends with bouncer, Doris Murphy, before becoming #5 for the Peaches. Madonna contributed the song “This Used to Be My Playground” to the film which played during the film’s closing credits. Though it is not on the film’s soundtrack because of contractual conflicts, it earned Madonna a Golden Globe nomination for best original song and became an international hit.

The Queen of Pop is continuing to wow audiences to this day. Madame X marks the eleventh tour by Madonna. From September 17, 2019, in New York to March 8, 2020, in Paris, Madonna has been revving up fans for some time now. The tour is to help promote her newest album of the same name and already more tour dates have been added by popular demand. Debi Mazar, Spike Lee, and Anderson Cooper were present at opening night.

A League of Their Own cast continues the legacy 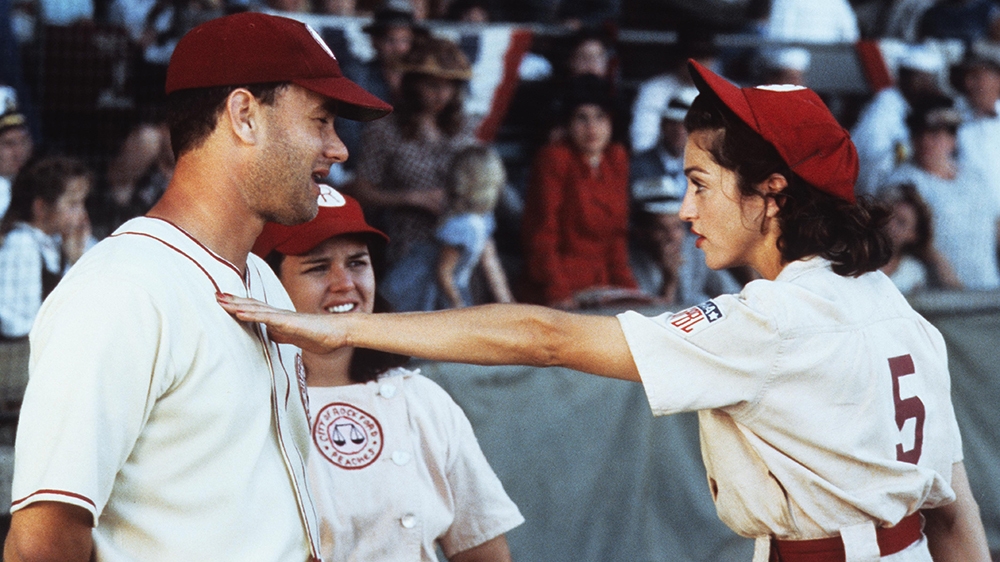 A League Of Their Own / Louis Goldman/ Columbia/ Kobal/ REX/ Shutterstock

League Of Their Own Cast: 25th Anniversary Celebration