It’s not often that personal items that were used or owned by Lady Diana, Princess of Wales, come up for auction. However, there are times when one piece or another comes up for sale. And, since her young death her personal belongings have increased in value. Coming to auction in December of 2019 is the stunning, dark navy blue dress Lady Di wore at the reception for her and Prince Charles at the White House in November of 1985. 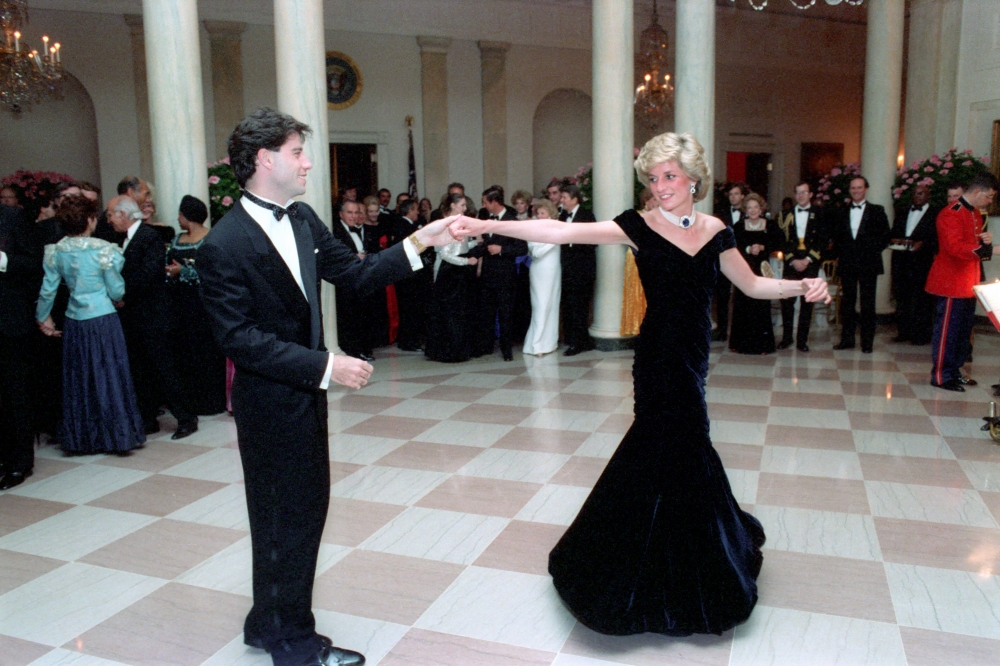 The dress was tailored by Victor Edelstein, made as a copy of one of his designs she had admired in burgandy. From photos of the era, many people assume that the dress is black, but it’s actually a deep midnight blue velvet. Edelstein later recalled that Prince Charles was very approving of the dress and commented that it would match nicely with jewels. For the White House dinner followed by the gala she wore it with a pearl and sapphire necklace.

Photographers snapped many photos during the epic dance between John Travolta and Lady Di in Cross Hall at The White House, making the dress quite famous. To this day, copies of this world-famous gown are still popular. 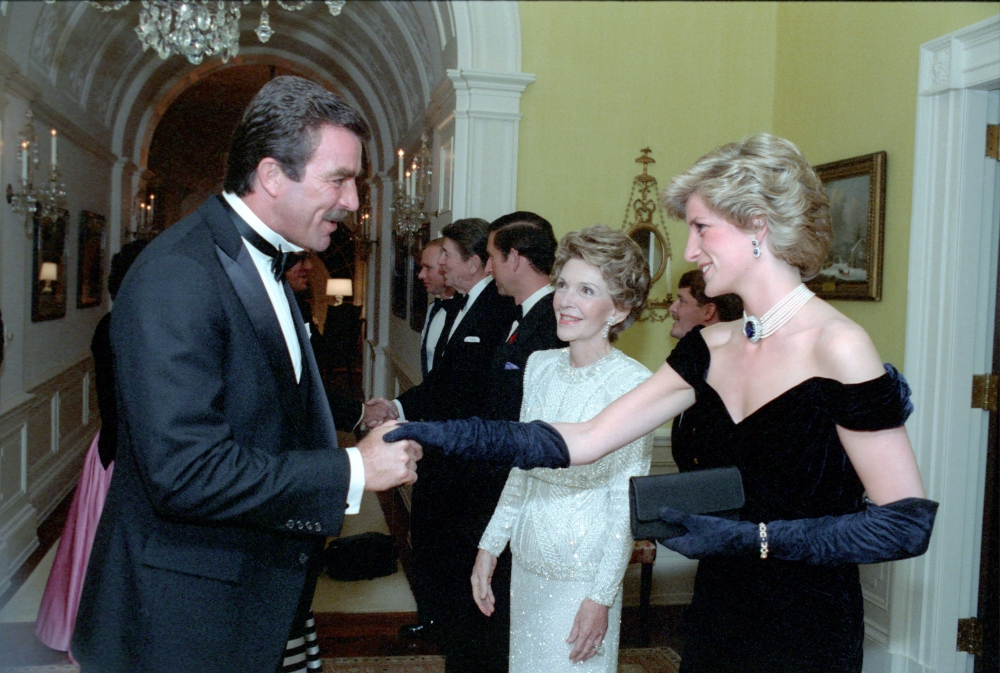 John Travolta later said of the dance that First Lady Nancy Reagan, had taken him aside and whispered in his ear that Lady Diana would like to dance with him. He shuffled across the dance floor and he later recalled that, “She turned around and she did that look that she did so beautifully and I asked if she would care to dance and she said she’d love to and we danced for twenty minutes to a medley of Grease and Saturday Night Fever. I was on cloud nine. She has great rhythm. We did spins and turns. We did a kind of modern fox-trot and she followed me very well.” 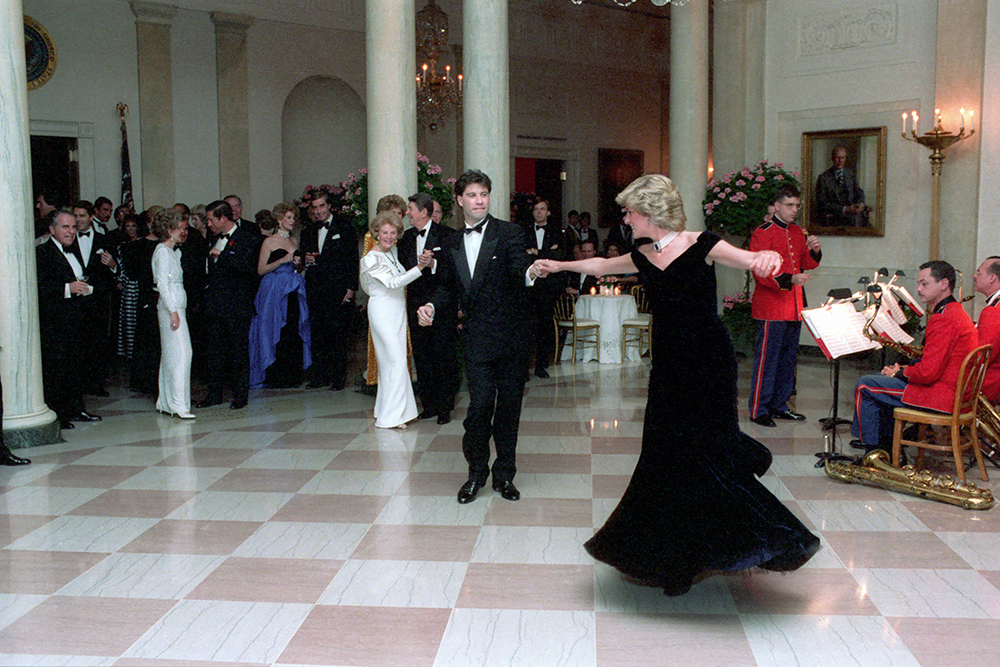 Travolta also made the remark to Lady Di that it would nice to dance with her again, although in front of fewer people, to which she agreed. Travolta’s dance work on Saturday Night Fever and Grease made him world famous as a dancer, but many people don’t realize that Lady Di had been passionate about dance since she was young. Sadly, her height of 5’8″ made her unsuited by industry standards at the time for a profession in ballet- something she had longed for.

Travolta later said it was the highlight of the the decade for him, but apparently Lady Di had really been hoping to dance with Russian ballet star, Mikhail Baryshnikov, who she had idolized for many years. The Princess of Wales also danced with President Ronald Reagan. 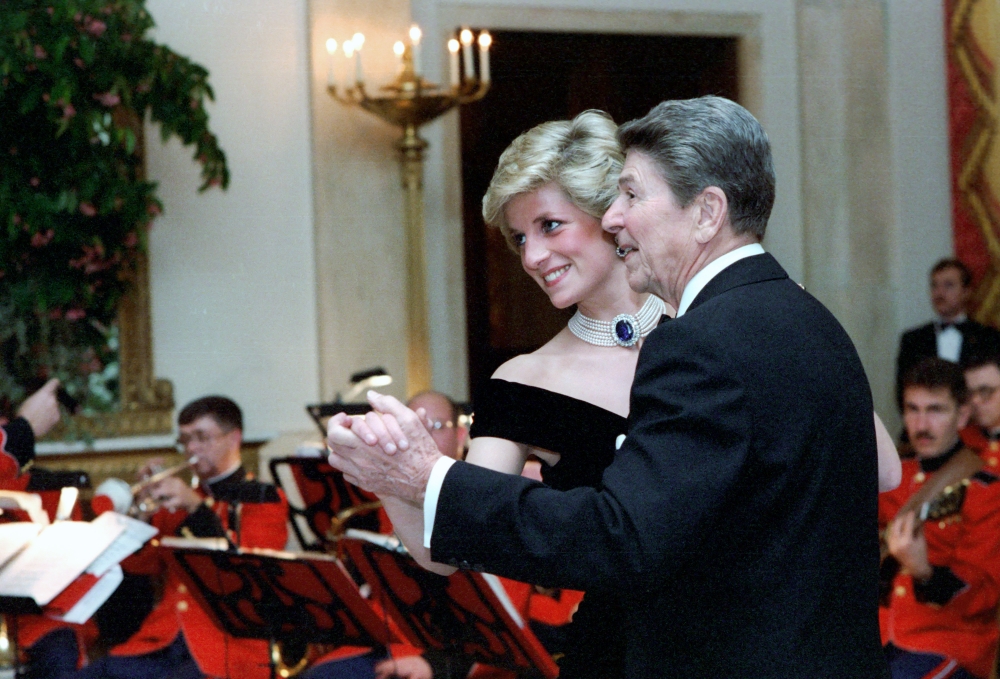 Lady Diana was known to bend the conservative fashion rules of the royal family by wearing strapless or off-the shoulder-gowns. This ruched gown is lightly boned and features a mermaid skirt shape which flares from the knee down, as well as a large bow to one side.

Unlike some other famous gowns, the dress was worn again by Lady Di in Bonn, in Vienna, and for her last official royal portrait 2 months before her untimely death. At the insistence of her son, Prince William, then aged 15, she sold a collection of her gowns to benefit charity in 1997. Her fame and glamor ensured that whichever charity she supported always flourished. Lady Di’s work with charities to benefit AIDS and leprosy, as well as her fervent work to remove and abolish anti-personnel mines brought these issues into the limelight. 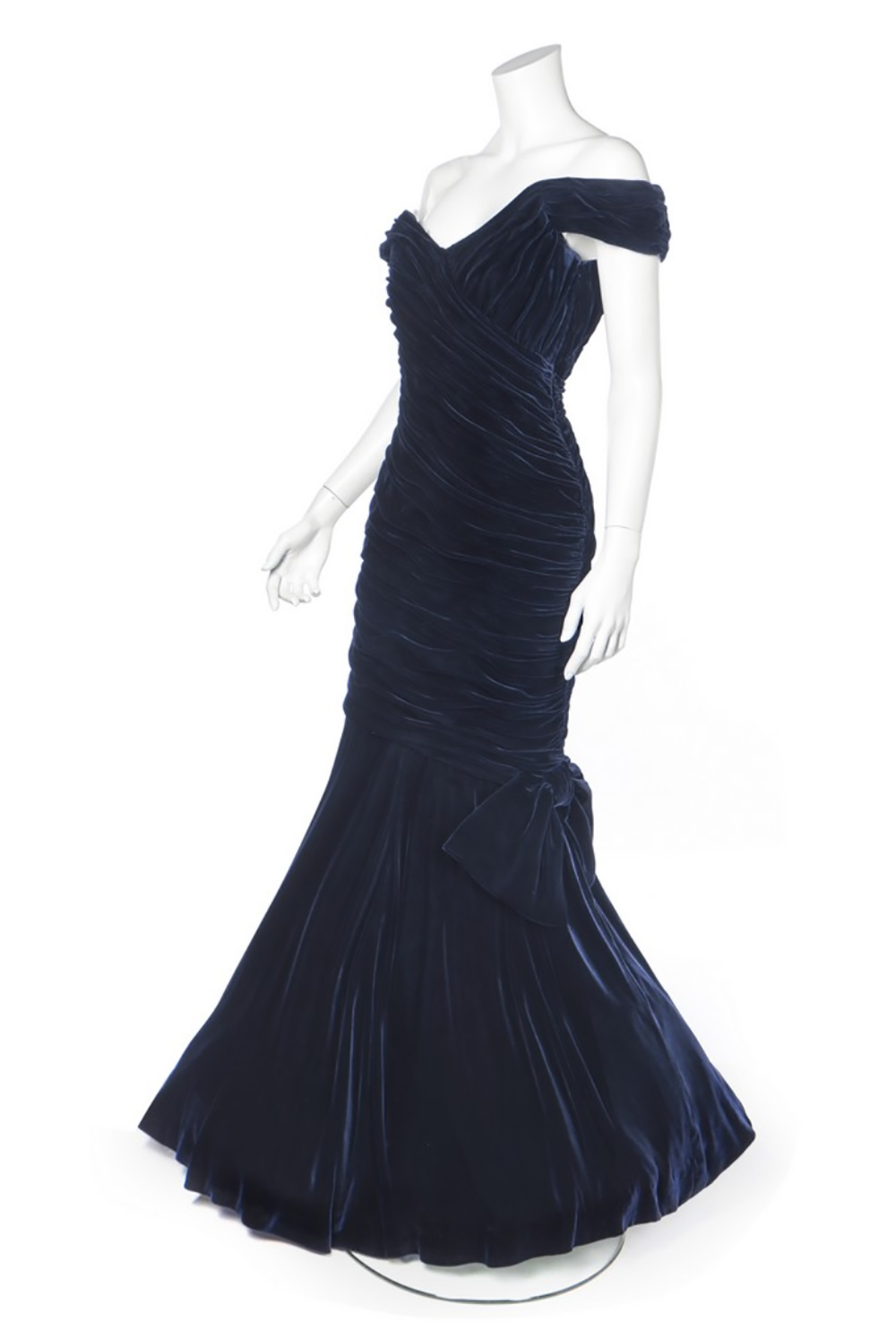 The navy blue dress last sold in 2013 for £240,000 which was part of an auction of 10 of Lady Di’s dresses through Kerry Taylor Auctions in London.

The same auction house will be handling the upcoming sale, to be held on December 9th in London as part of the Passion for Fashion auction, which includes rare and designer pieces from the 1600s to the modern era. Lady Di’s dress is estimated to fetch between $320,000-£450,000.

UPDATE: Following the auction, it was revealed that there were no offers for the iconic dress that met the reserve price. Instead, the gown was purchased post-auction by Historic Royal Palaces, a British charity that preserves many castles, palaces, and a host of royal history for the general public.

The dress was purchased for £220,000 by the organization and the sale seemed to be happy compromise for both Kerry Taylor Auctions and Historic Royal Palaces.