If you’ve ever wanted to live inside your favorite TV shoes, then you’re certainly not alone. The good times shared in that space by the characters on a show, not to mention repeated viewings over time, can lead the sets of famous TV programs to feel like the home of a friend or relative. Not yours exactly, but extremely familiar.

Each set is a sign of the times in which it was designed, taking cues from modern trends, but also influencing how we as viewers decorate. In an intriguing new IKEA campaign, three iconic living rooms from TV shows were recreated using only their products and the results might make more than a few folks try to transform their living rooms. 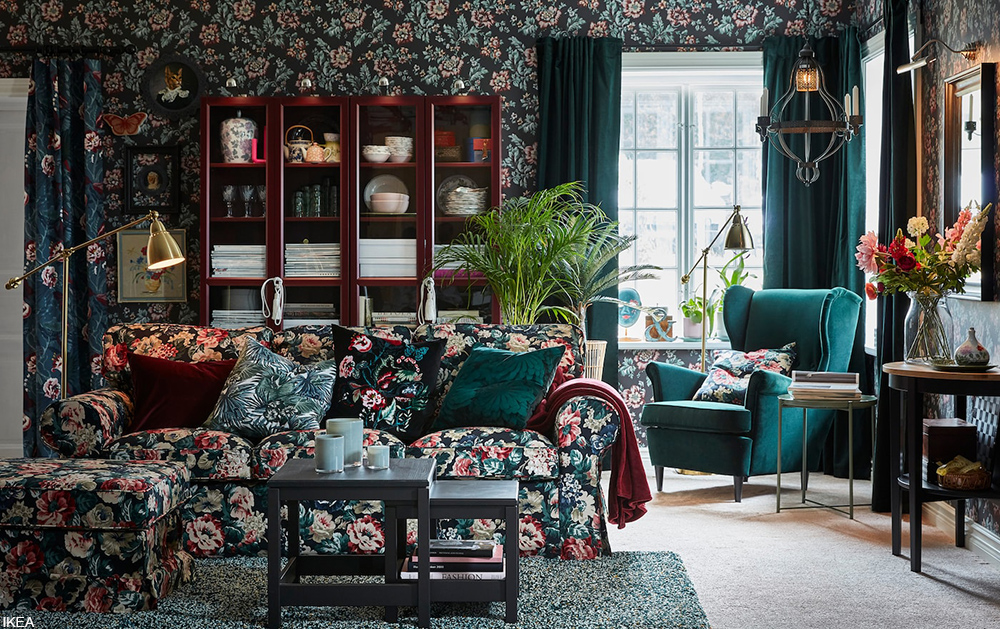 This catalog room isn’t one of the TV recreations, but still manages to remind us of the living room from classic sitcom Who’s the Boss? quite a bit. Via/ IKEA

As part of the 2019 campaign, IKEA United Arab Emirates hired Spanish advertising firm Publicis Spain to track down items and create three separate looks for their site. Thousands of products were waded through, taking months to achieve. In the end, there were so many products that multiples in each category were available for each item of decor. That’s a lot of items!

The look of each living room is not exactly the same as their on-screen counterparts because very few items were manufactured for this campaign – it was done almost exclusively using items that anyone can buy from IKEA. Following each spread if a breakdown of the items used and their prices, all listed in dirhams, the currency of the UAE.

First up is The Simpsons, though their unchanging living room is not a set at all. The simple design of this living room was never a stunning piece of interior decor, but like many TV living rooms, over the years it became a comforting sight. There is only one painting and one wall vase, as the ornamentation on this living room is quite minimal. But, the broad range of colors make up for that fact. 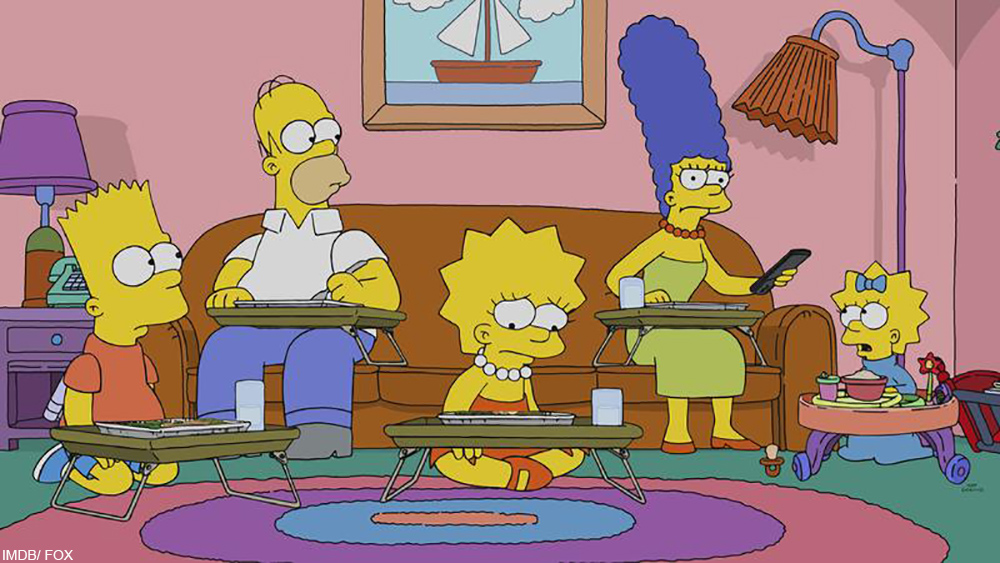 IKEA created a Simpsons look and we have to say they did quite the job. The rudimentary sailboat painting however, you’ll have to paint yourself as IKEA does not sell that particular piece. 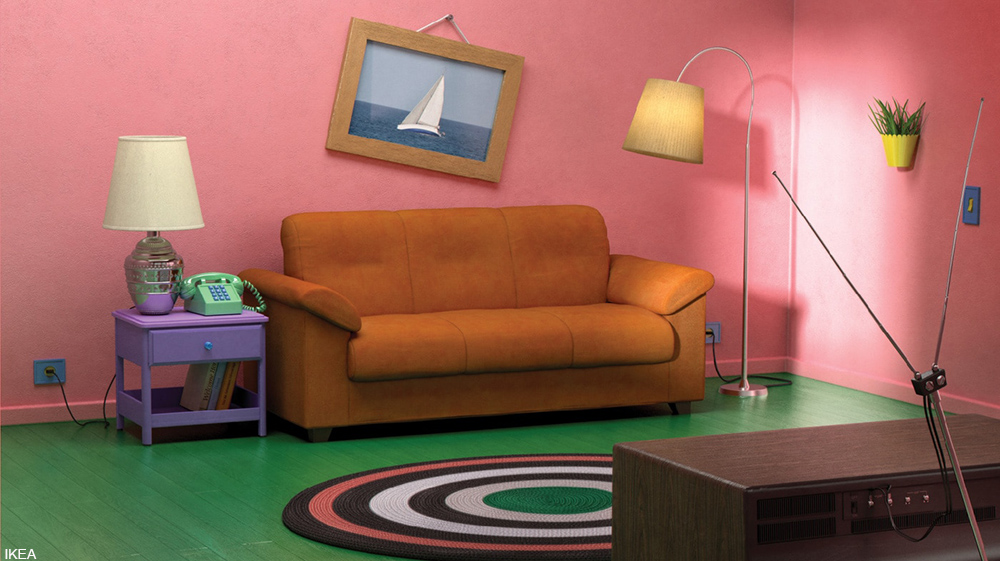 The couch on their site is not that familiar orange color and is only available in brown and grey. This means you’d have to buy an orange slip cover to complete this particular living room, but overall we’d say they came pretty darn close to the original cartoon living room (not to be confused with The Simpson’s more formal front sitting room).

Next is Monica and Rachel’s apartment from the 1990s show Friends. The concept of two young ladies both working in food service and yet somehow being able to afford and decorate such a prime piece of New York City real estate was always a matter of contention, one that was perhaps tempered by the eclectic design of the main rooms.

Shocking purple and teal walls left no question as to the gender of the people who lived there, but the mismatched dining chairs and vintage dresser used as a TV console made it feel very homey. The furniture gave off a feeling of being secondhand, and sometimes a little mature for young women. But, it was Monica’s grandmother’s apartment they were living in after all, so perhaps the more old fashioned aspects were intended to be hand-me-downs from another generation. 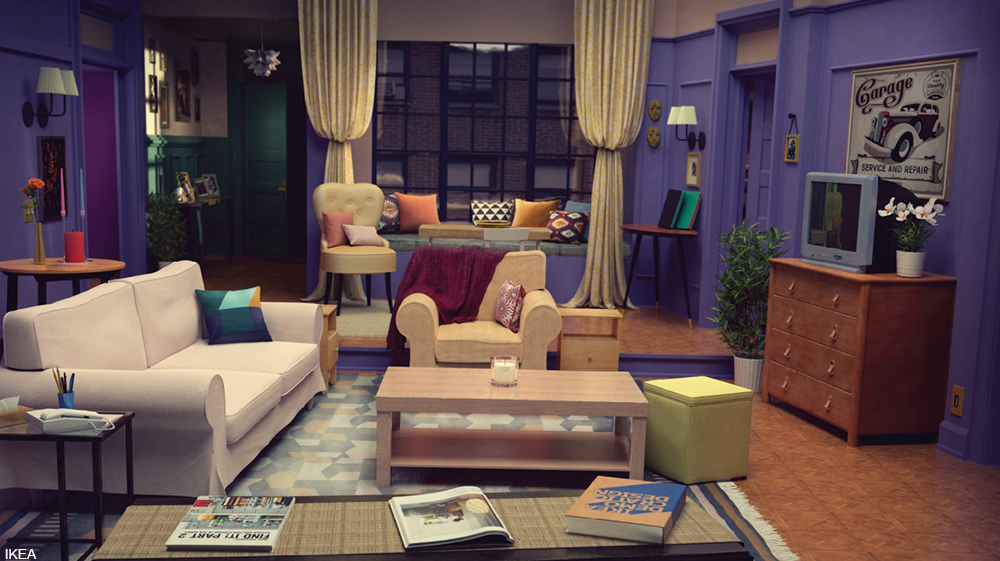 IKEA’s Friends living room has a more modern feel, with a geometric rug instead of a floral one and a squared IKEA dresser instead of the rounded waterfall dresser from the show. Other touches, like modern black hooks, are quite different from the original. Still, the overall design is instantly recognizable and does a good job of mimicking the original set. 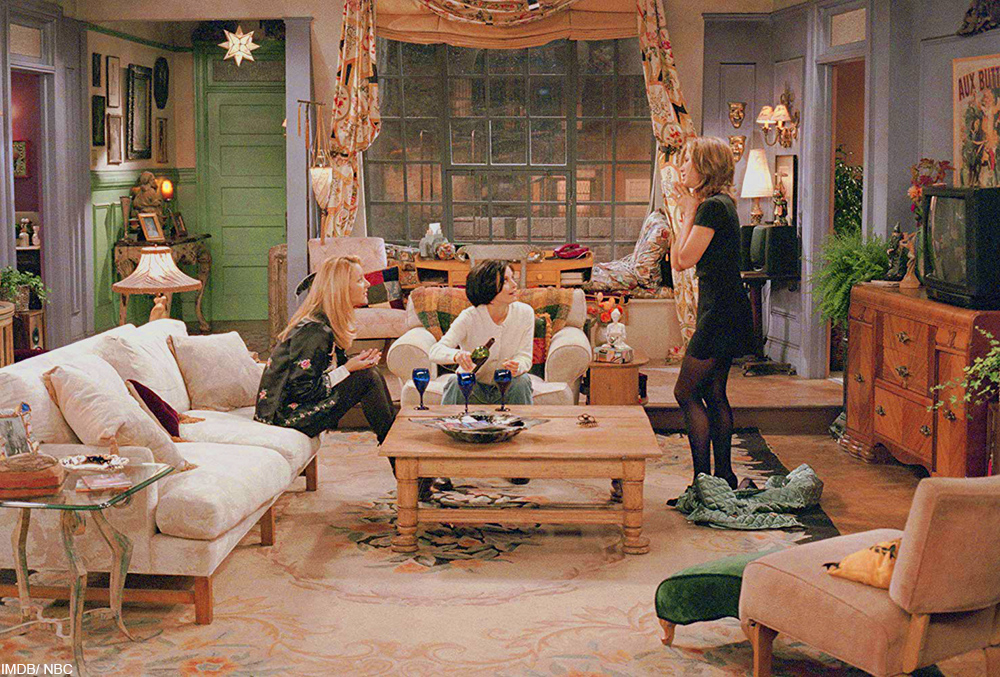 The final look has a vintage feel from a very modern show: Stranger Things. Set in the 1980s, the sets showcase design of the 1970s-80s in overwhelmingly tan and brown hues. The living room of the Byers family in the first season is a nod to the leftover decor of the 1970s and earlier: floral wallpaper, brown sofa, and wood paneling were very familiar sights of the era. 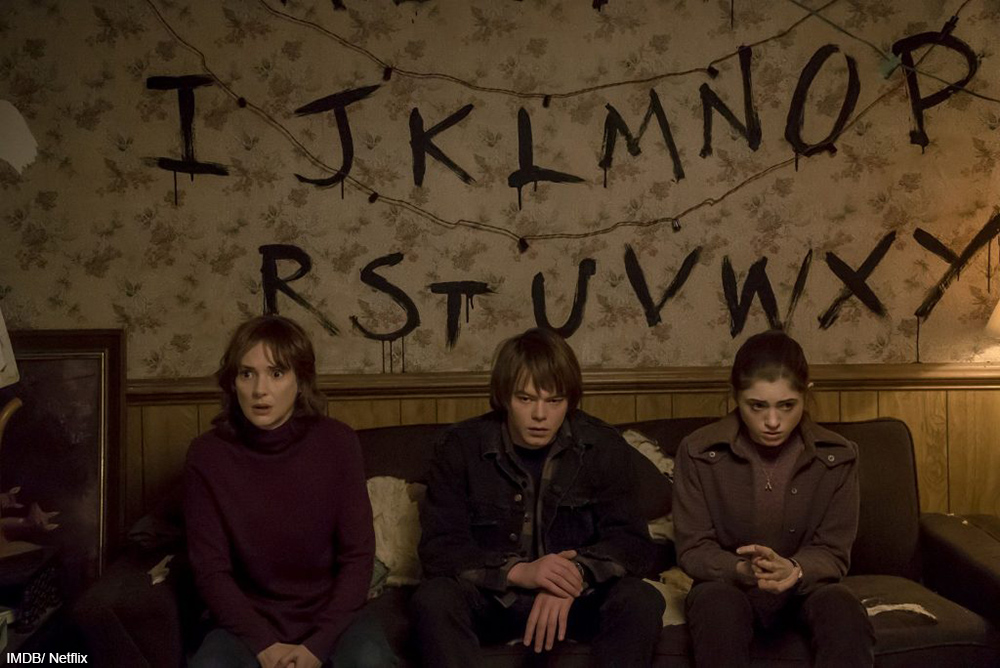 Later changes to the room include Christmas lights strung over letters and a striped blanket over the couch as a sort of slipcover which doesn’t really match much else in the room. 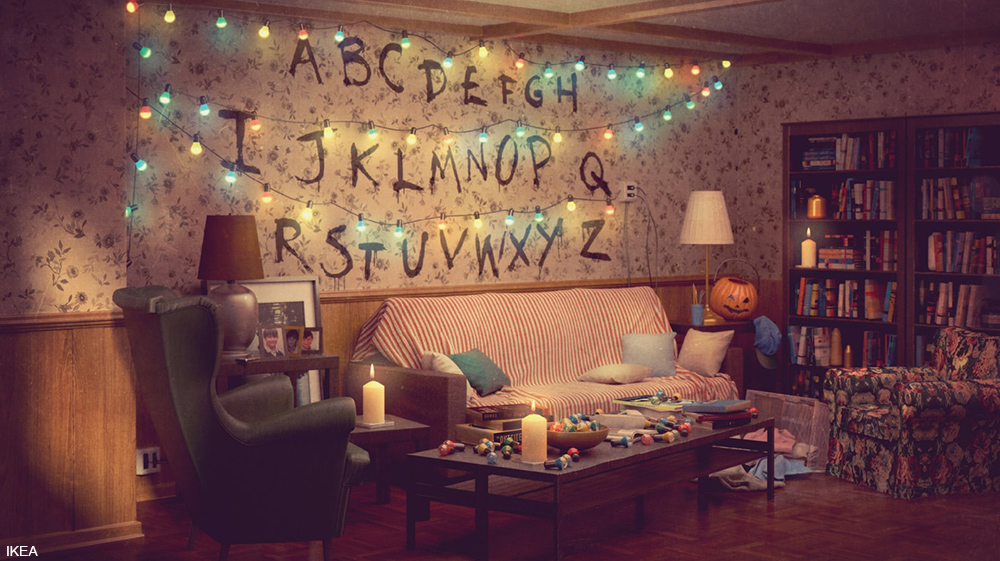 The IKEA version features many of the same elements, including dark wood furniture and a floral patterns on the arm chair and wallpaper and they couldn’t forget the string lights.

It’s important to note that IKEA has not mentioned the names of the these TV shows in their campaign. The rooms are so iconic that they need no introduction at all. How well do you think the company did at these recreations? Would you ever design a room based on a TV show?