How to Identify Delft Blue Pottery

As with anything attractive, there are many copies of the famous Delft blue porcelain that have been made over the years. This distinctive blue and white pottery often depicts scenes from Holland, but back in the old days had a more botanical feel, with tiles, spoons, pitchers, and bowls bearing all kinds of designs. Today, many of the Delft pieces most commonly found in stores are of the tourist variety – sold for a quick buck without the true hallmarks of traditional Delftware.

Learn more about these beautiful ceramic pieces and their marks below. 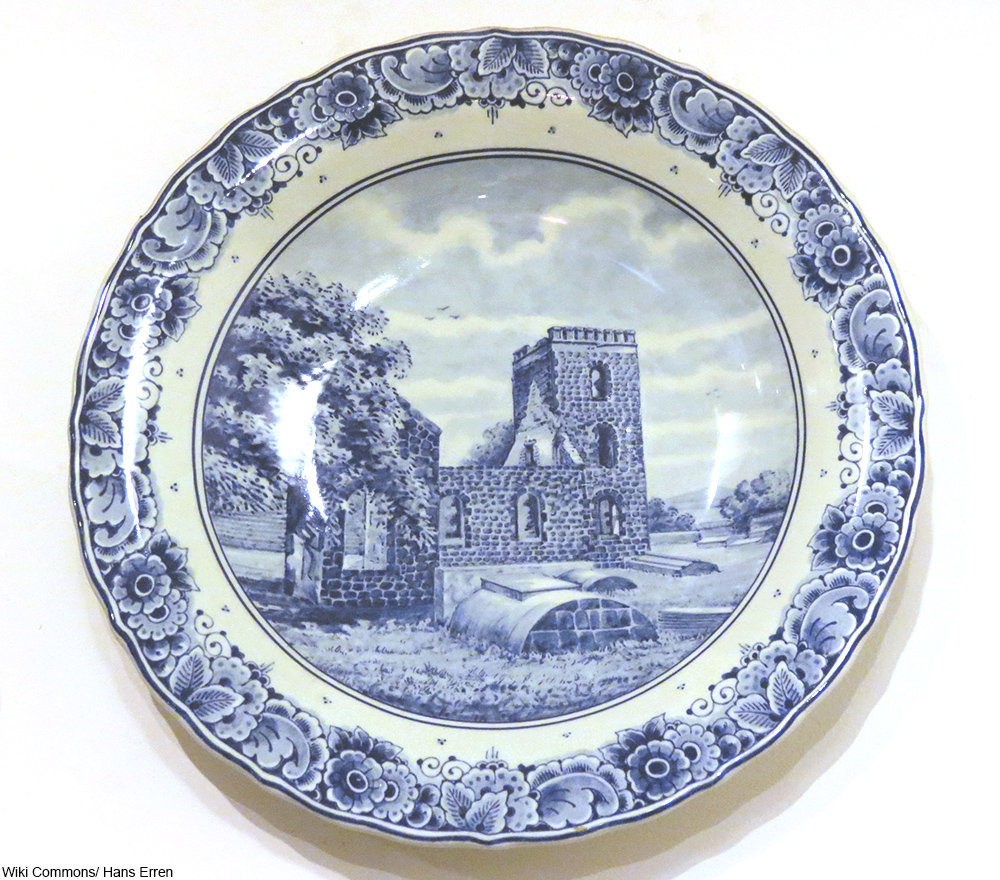 The History of Delft Pottery

In the 1600s the Dutch explorers brought in wealth and a variety of products for the nation, which made them a world-class trading partner for other European countries. Sugar, spices, tea, coffee, cast iron, and pottery became some of Holland’s most desirable trade commodities. All of these products held up well over long voyages and were soon considered indispensable for the well-to-do in Europe, the Middle East, and even in the Americas.

What made Dutch pottery so special was that the tea culture in Europe had not yet evolved and at the time the Dutch were some of the few making teacups and the proper paraphenalia whith which to drink tea. The hand-painted pieces were lavishly decorated in vibrant blues, but also other colors like black, red, and yellow, depending on the design. 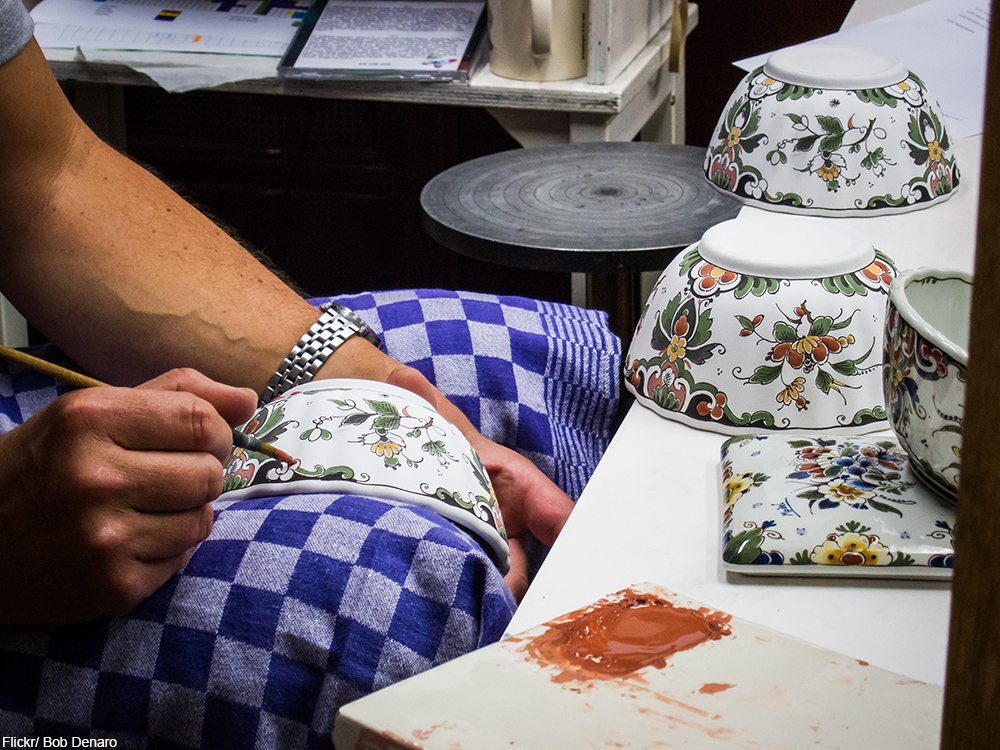 The initial copied designs of the late 17th century were intended to sate the Dutch desire for all things Eastern at the time. The formation of the Dutch East Indies Company in what is today Indonesia was a huge trading force which led to the colonization of the area. The success of new crops and goods from Indonesia gave rise to a craze for Asian-inspired goods. But, Chinese pottery was quite expensive to import and this made it largely inaccessible to the even the upper classes. 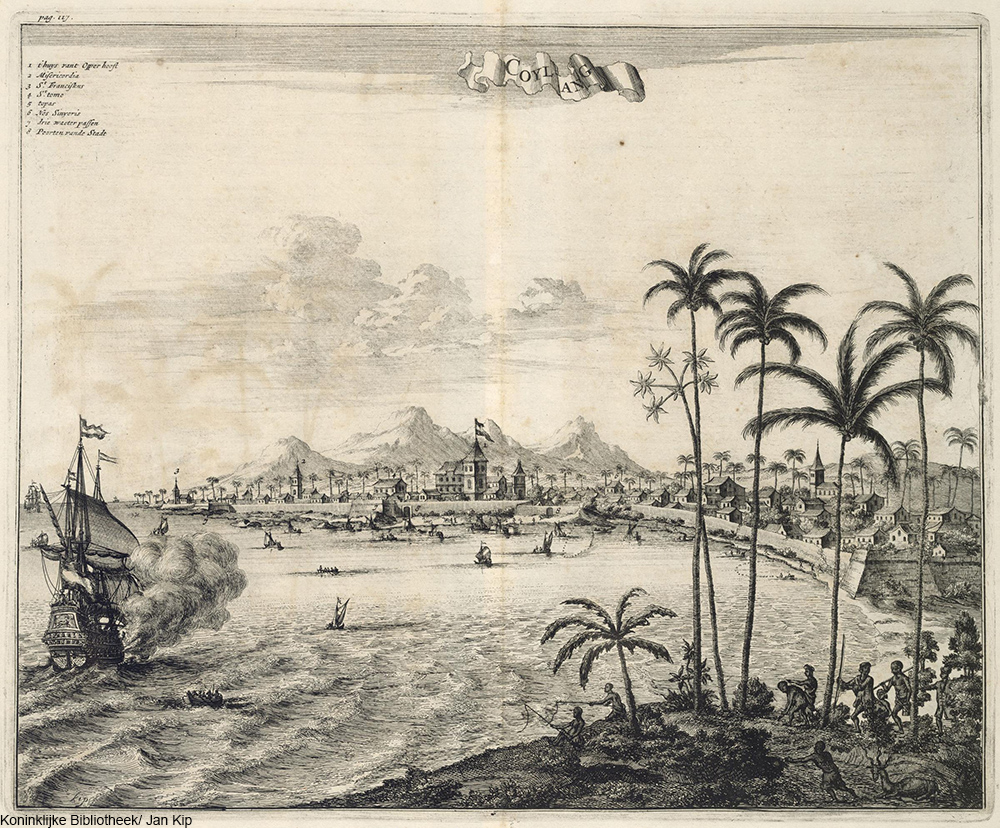 The first imitations were made for tea drinking, another Eastern influence. These early Delft teapots and cups were not porcelain, but were in fact pieces of earthenware which had been dipped in white glaze in order to imitate the fine Chinese pieces that were so exclusive.

Created as an imitation of Chinese pottery, which used blue and white together for a unique look, the first Dutch versions copied the Chinese patterns. Later types of Delft porcelain instead depicted scenes from Holland, like canals and windmills. Delft, once the capital of Holland, soon became the center of production for what was eventually known as Delft Blue.

The recipes for the deep blue varied by factory, with each inventing their own special recipe. Then the designs were applied by hand after first firing, then re-fired in the kiln. It was only in the 1700s and beyond that transfer patterns made for more complicated designs. Since there was not one hue which was “Delft blue” the tones can range from deep navy to bright royal blue.

The first Delft pieces were often left unmarked, as marking wasn’t as common back then as it is today. Early designs were painted completely by hand, and that shows in the inconsistency of lines or other slight imperfections. Early pieces included tea sets, vases, decanters, and decorative tiles. 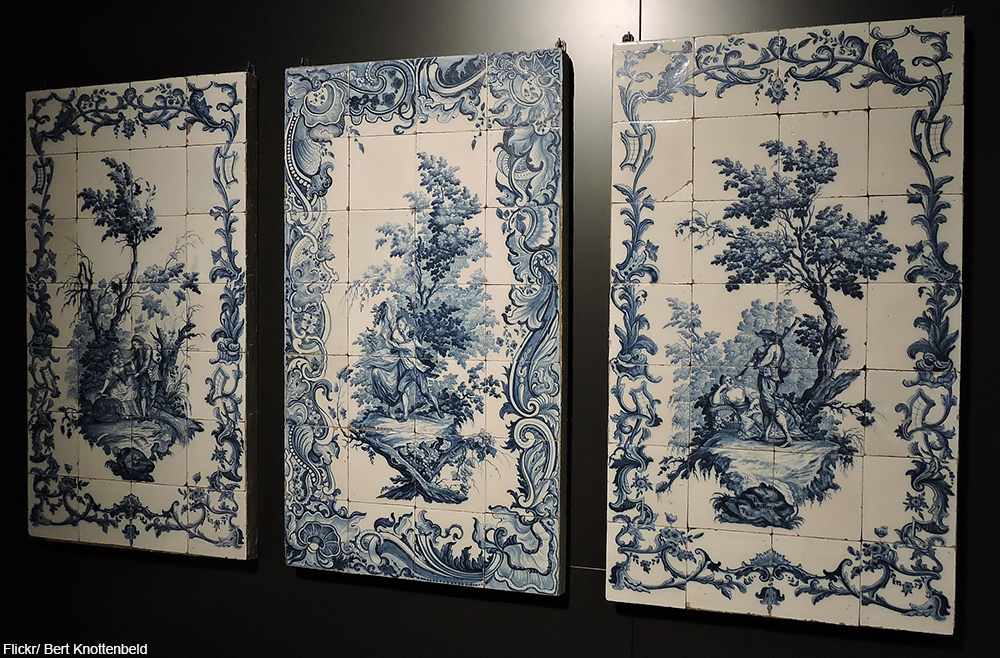 Today markings on the bottom of Delft pieces will often say “hand-painted in Holland” along with any number of variations of the phrase “Deflt blue” in either Dutch or English. However, many modern pieces are not hand-painted at all, but are instead made by transfer and stamp.

The phrase “Delfts Blauw” is often seen on items and indicates modern provenance. Around 1900 markings indicated were spelled “Delft” with no “s” on the end. Prior to 1900, it was hit or miss with hallmarks because many companies simply didn’t mark their pieces at all. Much as there was not one type of blue, there was never a Delft Blue company. The name instead refers to the type of decoration. However, this type of mark is a modern one.

Aside from markings there are other clues to tell modern or fake pieces from the real thing. Check for signs of a transfer or stamp on a piece that claims to be hand-painted, as this is a dead giveaway that the piece is not authentic. The lines of a copper transfer or the dot matrix of a printed design are two obvious tells, but you must look closely to discern these details. 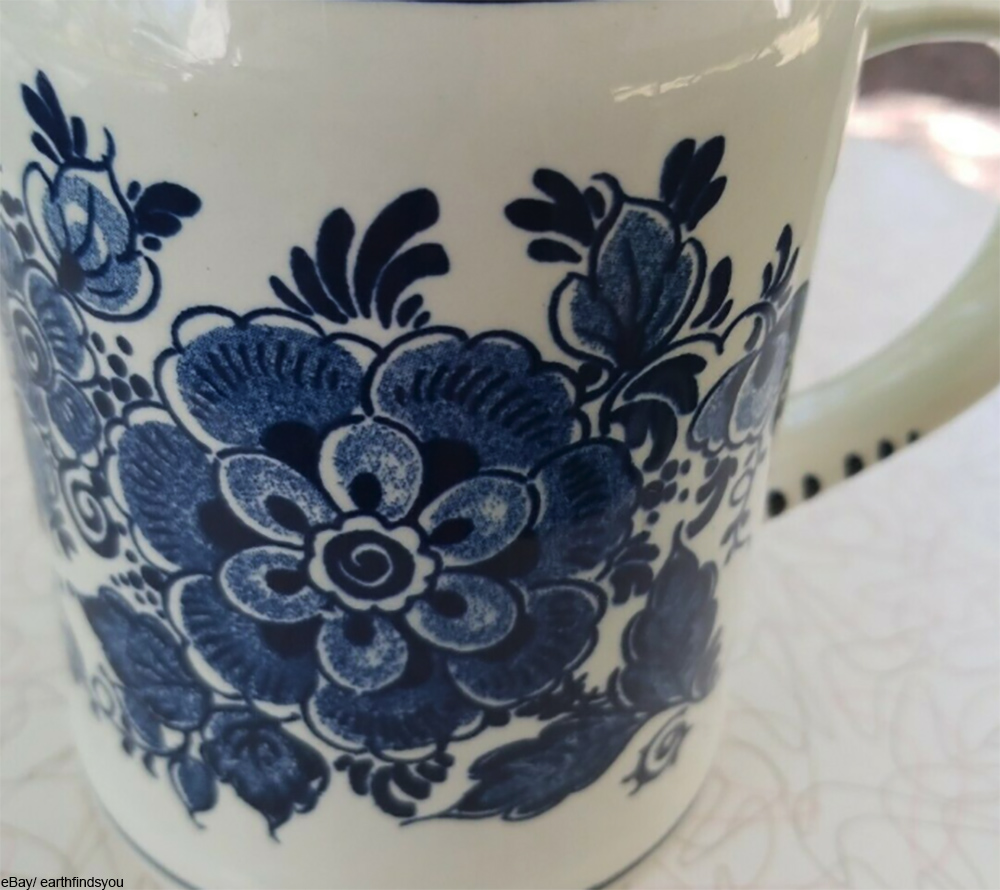 A close look reveals a dot matrix on this piece of pottery, done in the style of hand-painted pieces. Via/ eBay

Condition is another way to tell how old a piece is. Minor chips which have either darkened over time or which reveal the true color of the pottery, as well as deep crazing are often found on very old pieces of Delftware. If a piece looks historic in design and is being sold as an antique, yet bears little patina of use then it is very likely to be a modern or fake piece. 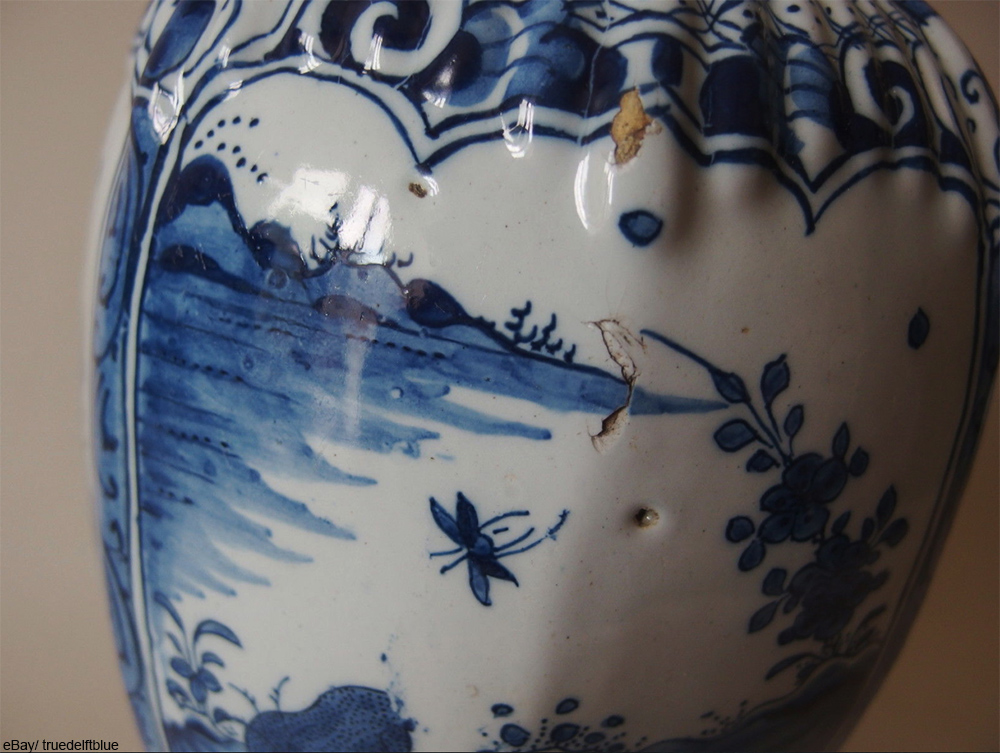 Antique Delft vase shows the brushstrokes of an authentic piece. Notice also the chips which reveal the pottery to be a different color from the glaze. Via/ eBay

Over the years a prosperous market for fakes has sprung up. Tourists who unwillingly buy these fakes then bring them home and they end up in antique stores and flea markets posing as the real thing. Founded in 1834, the Royal Sphinx company in Maastricht was a key producer, despite being many miles from Delft. Delftware is often known as Royal Delft, often bearing a crown on the bottom. But, this doesn’t mean it is original. This symbol has been used by many modern companies over the years.

Another popular brand is Koninklijke De Porceleyne Fles, founded in 1635 and still in business today. The brand’s hallmark shows a pot above their symbol, but this has only been in use since 1879. The company also goes by the term Royal, since they were used by the royal family of the Netherlands. This is the ubiquitous maker of Delft blue and the reason many people refer to Delftware generally as Royal Delft regardless of brand. Find out more about their marks here.

Today the term “Delftware” can apply to pottery made in the Netherlands or in England, where the Dutch technique of using tin-fired clay was also used. This might be a bit confusing but the main thing to be aware of is the time in which it was made. Tourist pieces are all well and good if they are correctly labeled and not sold as antiques.

10 things you didn't know about Blue Willow china: Click “Next Page” below!