Advice for Housewives in 1961 from Betty Crocker

Up until the past few decades, the primary occupation for women was that of homemaker and mother. The busy and complicated workings of the home were extensive, but women did the bulk of it. Long before microwaves, Roombas, and Uber Eats simplified homemaking cooking, the average housewife would have spent the majority of her time cleaning, planning, doing errands, and baking and cooking from scratch. It was this last aspect which led to the popularity of Betty Crocker, the advice-dispensing baking goddess that American women turned to for hints. 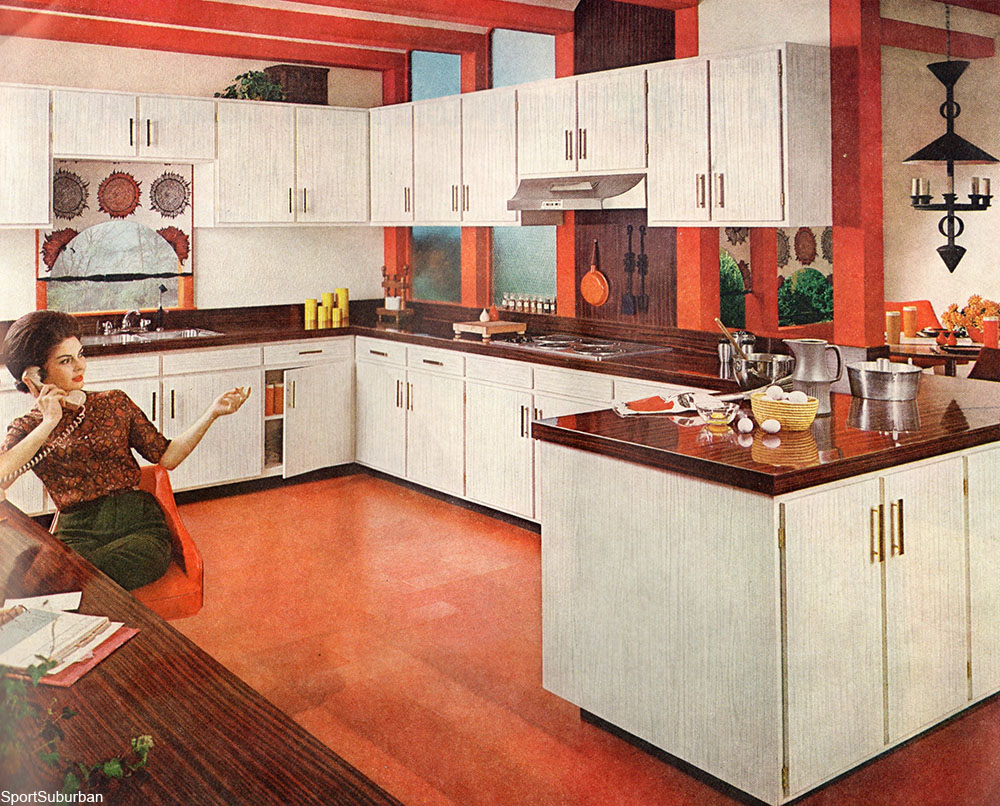 Despite her nearly century long Betty Crocker was exposed in a 1945 Fortune article as being a fraud in the sense that she wasn’t a real woman. Despite answering letters and “authoring” books, Mrs. Crocker was a fictional character whose words were invented by a team of cooks, bakers, and Madison Avenue marketing men who had created a convincing role model. Since the 1920s the brand had been a trusted resource for baking and provided easy-to-understand recipes on everything from cobbler to cakes to pies and much more.

For anyone who owned the 1961 gem, Betty Crocker’s New Picture Cook Book, you may remember the appetizing photos that peppered the book. Some however, may have forgotten the advice on personal appearance, on attitude, and on scheduling that was also found in its pages. 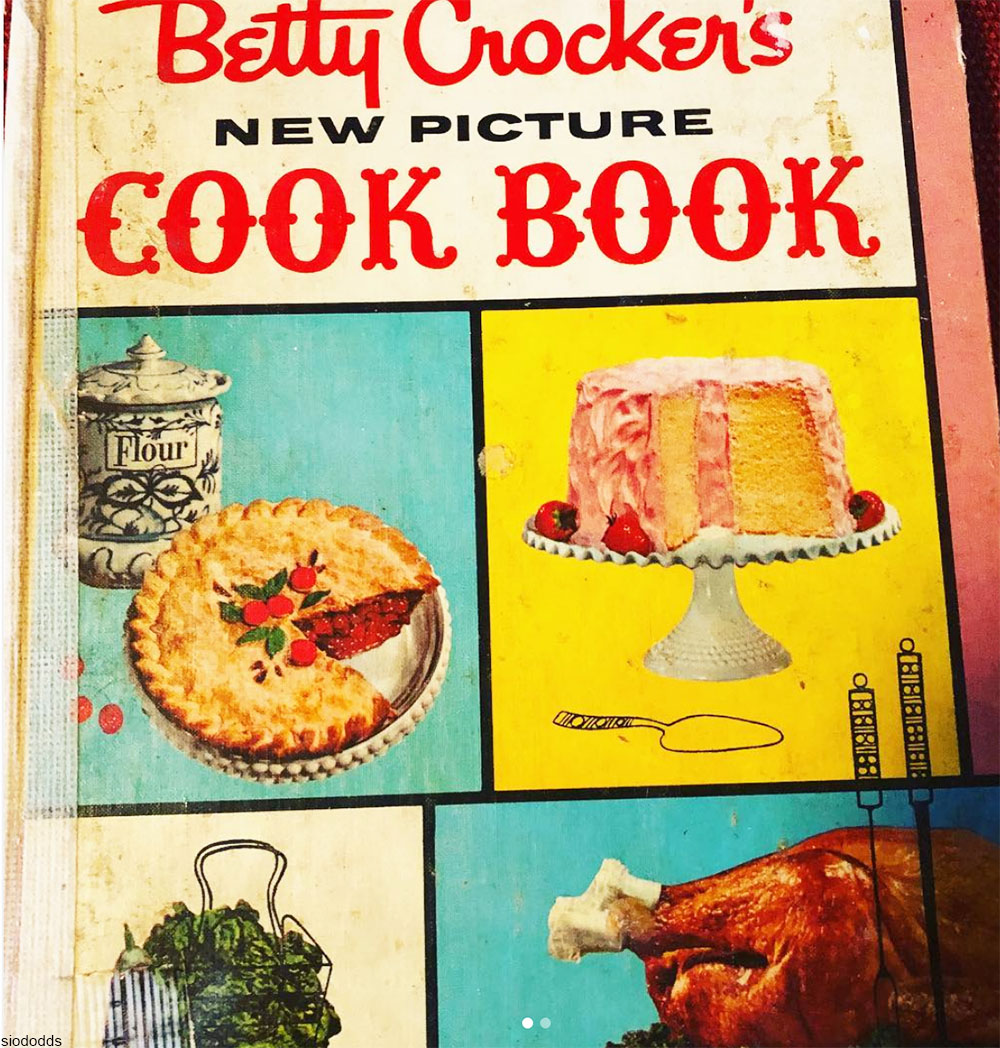 The section was called “Hints for the Homemaker” and included a number of tidbits for the housewife. Some might say that the advice doesn’t age well, although there are some pretty modern ideas sprinkled in with the old.

Batch cooking and planning was suggested with advice like, “Write menus for a week’s meals at a time. Shop for staples once a week, fresh fruits and vegetables twice weekly.” The advice continues: “If you have a freezer, make several cakes, pies, cookies, main dishes or sandwiches at a time and freeze some for future use.” The section also talks of planning for leftovers and cooking in batches to simplify things at home.

With meal prep these days being a very popular practice, it’s a wonder that it ever fell out of fashion. This advice presumes that the homemaker may have some busy nights when cooking from scratch won’t be possible- a change from earlier generations to be sure.

An old fashioned piece of wisdom in the book is to make up a schedule of jobs, much like our ancestors did in the old days. It was recommended that one should have a specific day for each chore: “Have a weekly plan for scheduling such tasks as washing, ironing, baking, shopping, cleaning the refrigerator or washing floors. One task done each day provides a sense of accomplishment and keeps work from piling up.” 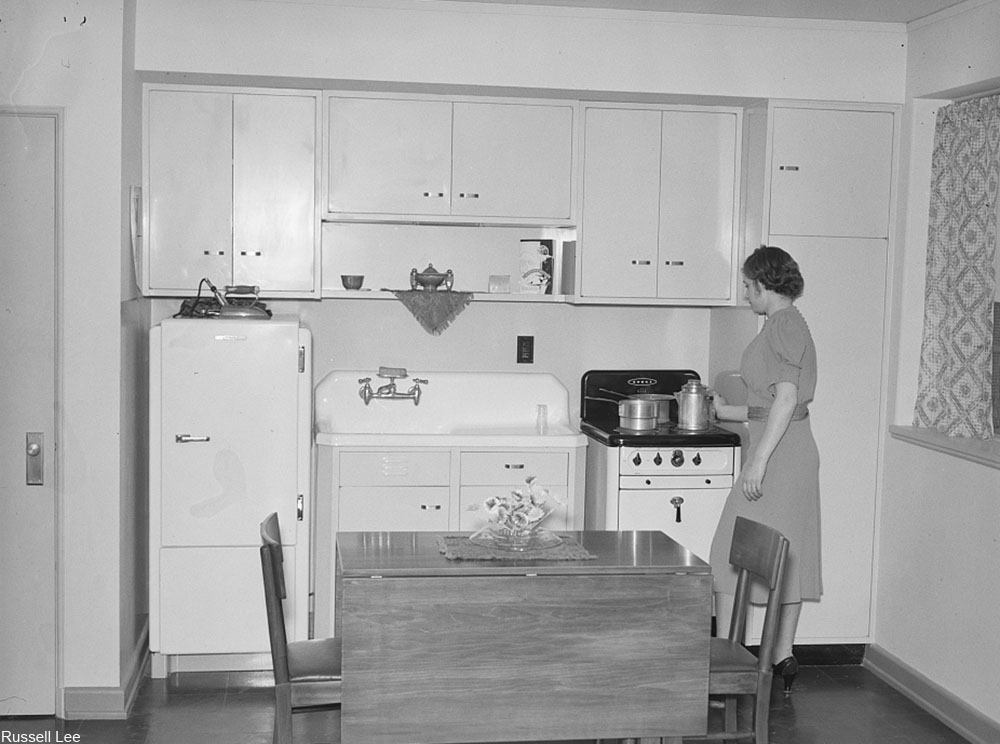 One of the most interesting pieces of advice in the subsection “Refresh Your Spirits” and concerns how one should present themselves to their family, “Every morning before breakfast, comb hair, apply makeup and a dash of cologne. Does wonders for you morale and your family’s, too!” This sounds an awful lot like advice on lipstick and hair styling that women were given during World War II, when keeping the nation’s spirits up was considered paramount. 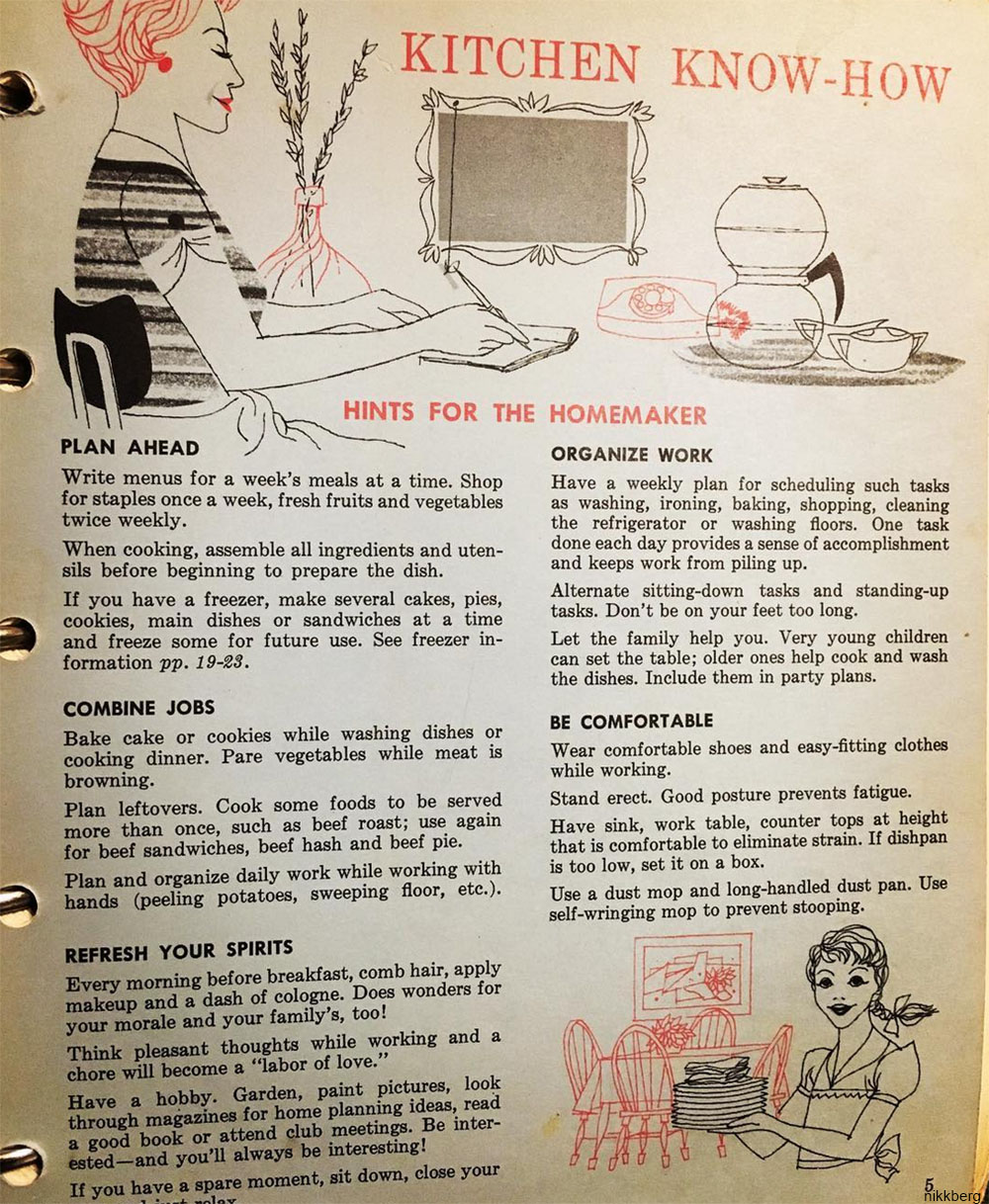 The helpful hints go on, “Think pleasant thoughts while working and a chore will become a ‘labor of love.'” However, a more progressive view was also given- that women should have hobbies and interests that go beyond her family: “Have a hobby. Garden, paint pictures, look through magazines for home planning ideas, read a good book or attend club meetings. Be interested- and you’ll always be interesting!”

Without saying it, the authors of the book clearly hint at what many women must have felt at the time- that they feared they were in danger of appearing boring to their husbands or children since a housewife’s world revolved around them. 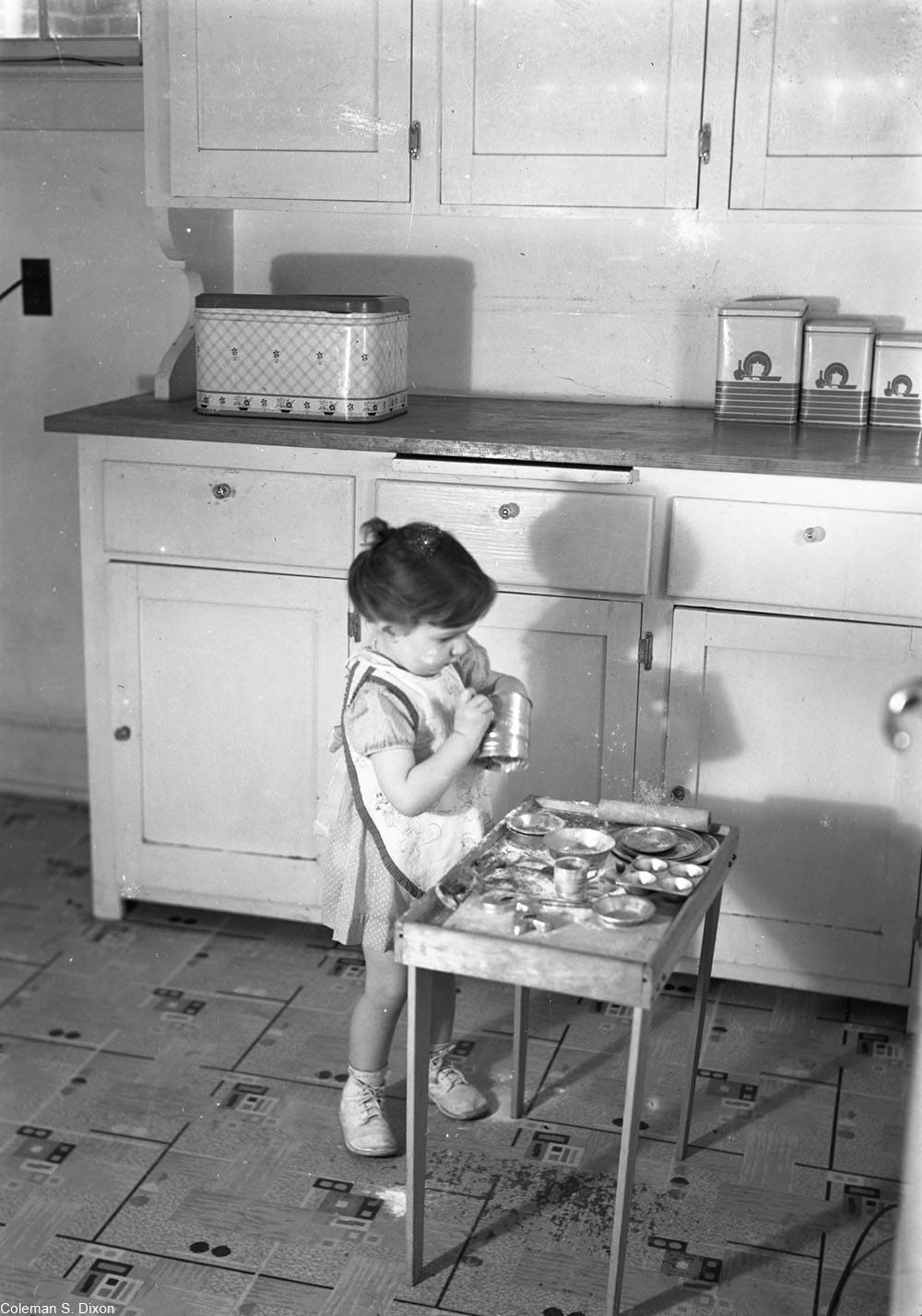 However, some of the most surprising and practical advice comes in the form of attire. Betty Crocker advised women to be comfortable above all else, “Wear comfortable shoes and easy-fitting clothes while working.” Other lines on comfort were all about making her housework a little easier, like using a long-handle broom and dust pan, using a self-wringing mop, and alternating between standing and sitting tasks so as to avoid fatigue.

While many women were probably quite happy to read these words, the section of Betty Crocker’s book doesn’t mention sharing chores with a partner and seems to assume that the woman still spends most of her time at home.

What do you think of Betty Crocker’s words of wisdom? Are they helpful or just plain condescending?