The History Of The Pet Rock

We have probably played with more toys than we will ever remember in our lifetime. Some of them may have been rather complex but every once in awhile, it is nice to take a step back and enjoy a more simplistic toy. One of those toys that have come and gone in popularity is the Pet Rock, a novelty gift out of 1975 that made one man a millionaire in a most unusual way.

The Pet Rock is actually a stone from a Mexican beach town and you can purchase them in bulk for a penny or less. When the Pet Rock hit the market in 1975, however, it retailed for $3.95 and by the time the fad faded, the inventor, Gary Dahl was a millionaire. How was it that such a cheap rock made millions?

Quite simply, he got rich because of the cardboard box used for packaging.

When Dahl came up with the idea for the Pet Rock, he was in California working as a freelance advertising copywriter. He was out for an evening with friends at a bar and the conversation turned to how destructive pets were. Dogs and cats required a lot of maintenance but Dahl said he didn’t have to worry about that because he had a pet rock.

Of course, he was joking but in the end, he was laughing all the way to the bank. When he got home he started writing an owner’s manual for the pet rock, detailing how to take care of it properly, how to train it to do particular tricks (such as play dead) and how it would be a faithful companion for a lot longer than other pets because of its ‘long life span’. It was a gag but he even took it further when he came up with the conception for a cardboard box with air holes that looked somewhat like a McDonald’s happy meal.

As it turns out, Dahl was having some serious financial problems at the time so he decided to push it even further. George Coakley and John Heagerty came in and invested $10,000. It was a considerable amount in 1975, but when you think that his intention was to sell worthless rocks, it was a lot of money. 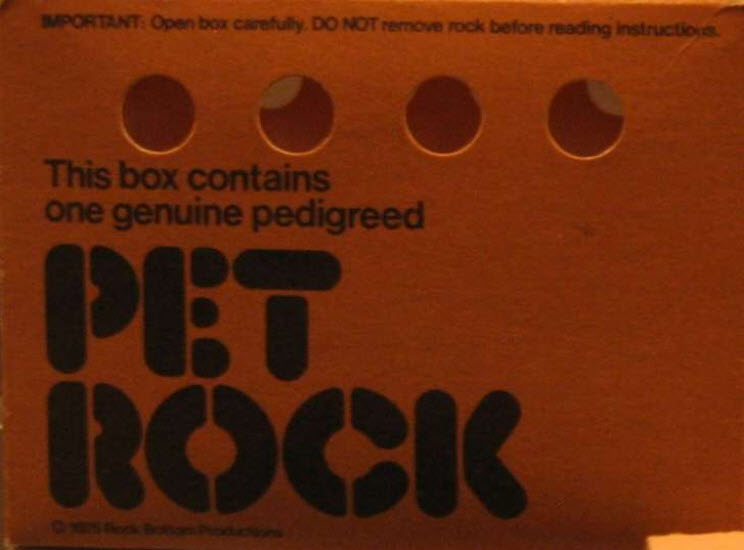 If there is one thing that Dahl knew, it was how to market products and he realized that there were many other similar fads that had done quite well. It seemed as if The Pet Rock was prime for success. Watergate was fresh in the minds of many people in the United States and Vietnam had just ended. He felt as if they would look at the Pet Rock and appreciate the humor behind it. The boxes were packed with the rock and the manual along with some softwood shavings to help protect the fragile item. He then purchased the rocks from a local sand and gravel company that got them from Mexico’s Rosarita Beach. The end result was the Pet Rock and it was revealed at a San Francisco gift show in August 1975.

It wasn’t long before the orders started rolling in. People could recognize the appeal of this benign and unusual ‘Pet’. Neiman Marcus wanted 1000 and Bloomingdale’s came on board before long. The word was even spread further on Newsweek to the story with a picture. At that point, Dahl had all of the credibility he needed for a very successful product, which started out as a bad joke.

When the holiday season arrived, Dahl was selling up to 100,000 Pet Rocks per day and would eventually sell as many as 1.5 million of them within a few months. Coakley got a $200,000 check for his initial $10,000 investment and he gave both Coakley and Heagerty Mercedes. Dahl earned more than $1 million on his invention that made $.95 profit each. He then launched his own firm, Rock-Bottom Productions, which was also a joke. If you were to call the company, the receptionist would answer with the words: ‘You’ve Reached Rock-Bottom’.

As was the case with many fads, the pet rock sensation didn’t last very long. Dahl was happy with the outcome but the investors sued for more money. They claimed that they had not received enough of a share of the profits so a check was cut to them for six figures. 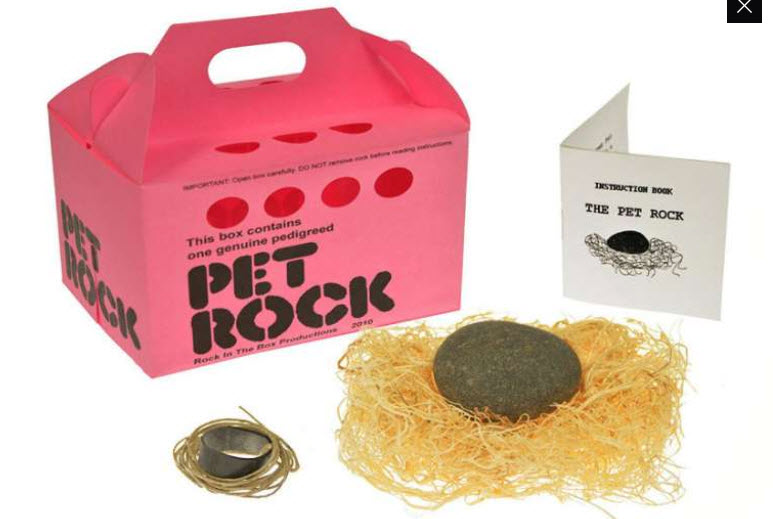 The Pet Rock attempted to receive a revival with the 1976 version of a Bicentennial Pet Rock with an American flag painted on it. They also sold mail-order college degrees for the Pet Rock as well as T-shirts and pet rock shampoo. Copycat gifts also came out on the market and saw some success. Dahl was unable to patent a rock, although he could’ve received a utility patent he didn’t attempt to do so. It seems as if the humor had moved on to other areas and the Pet Rock was well on its way out.

Dahl had other ideas, including the Sand Breeding Kit, which gave guidance on how to grow sand. He also came up with the Canned Earthquake, which was a can with a windup mechanism that jumped around on the tabletop. Limited success was seen with both of those items but Dahl was still successful. He bought and renovated a bar in Los Gatos, which he named Carrie Nation’s Saloon.

There were some issues with him having such a public location. People would stop by with their own ideas for a gag gift, such as packaging elephant excrement. Some people even wanted to market a pet stick but he didn’t have the patience for those investors. He felt that the Pet Rock was not able to be duplicated and after taking his ‘eight-year vacation’, he went back to advertising.

You can still find the Pet Rock online, although it isn’t Dahl’s business. He passed away in 2015. There were unsold rocks when the fad ended but he didn’t care if they sold or not. He said he would just use them to repave the driveway.