How Spam Became a Household Name Because of WWII

Most of us have grown up with this salty treat. Spam was served with eggs for breakfast, or fried up and slapped on a sandwich, or cubed and mixed into casseroles. For many people the taste brings back fond childhood memories since many moms relied on this cheap and easy meat to feed their families.

For younger generations Spam is often a foreign concept or something they’ve only heard about. With tastes changing so drastically over time, it begs the question of how Spam rose to be one of the best-selling foods of the mid-century era. The answer has to do with both the Great Depression and World War II. 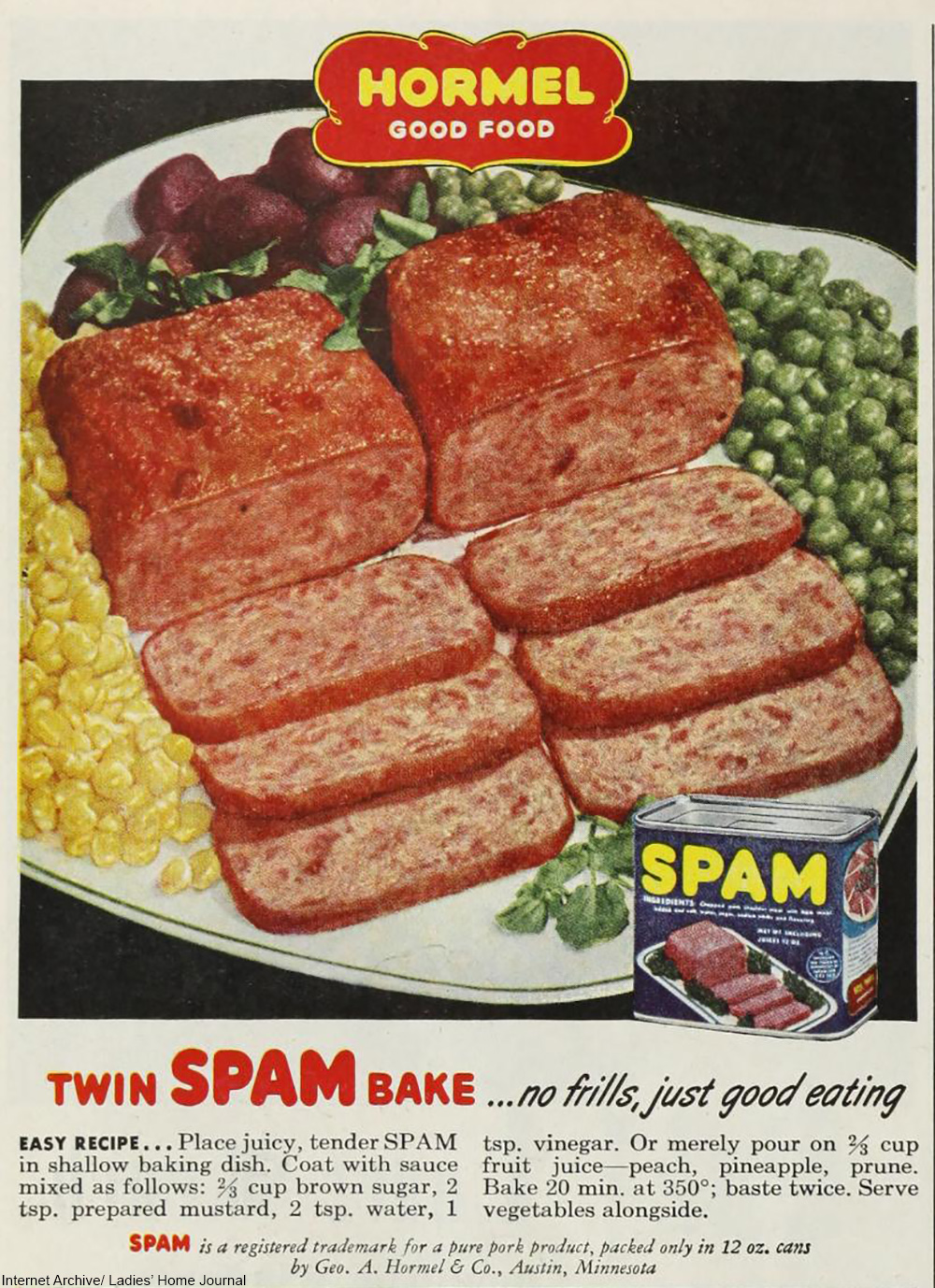 The Invention of Spam

Before the Great Depression the Hormel company did a brisk business in fresh meats, but not without a lot of competition at the grocery store. The family-owned company was looking for a way to stand out from the rest of their competitors in the fresh meat line of business. Jay Hormel, son of the company’s founder, began working on a canned ham product in the 1930s, correctly thinking that a shelf stable canned meat would be a good fit for the market at the time. 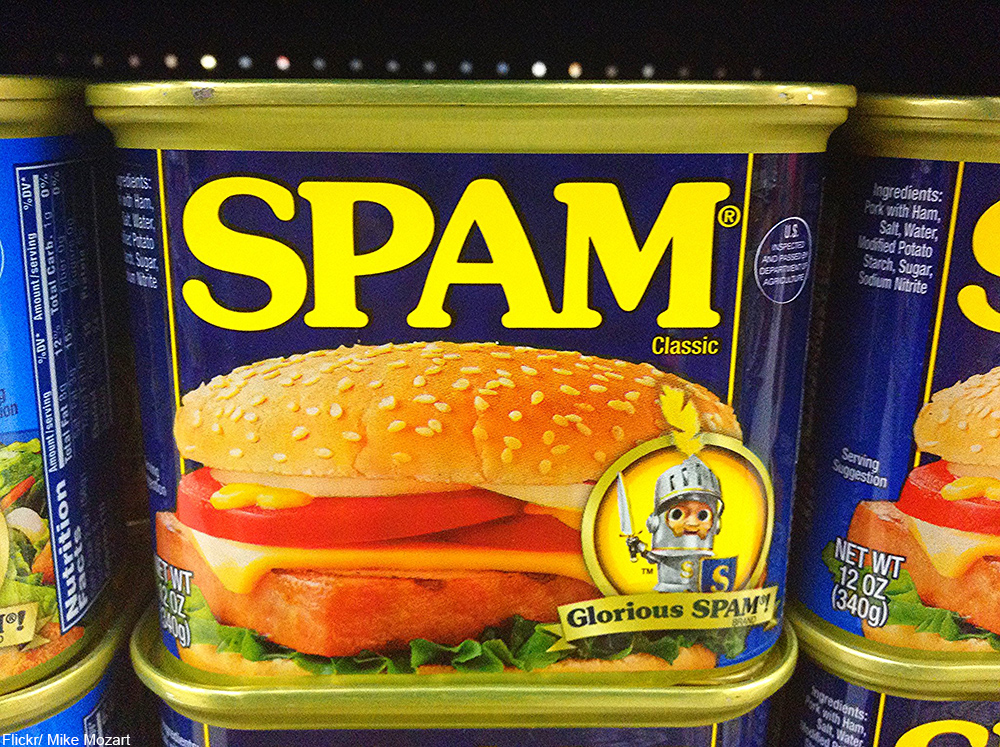 In 1937 Hormel released Spam after years of experimenting with the formulation. Potted meats had been a poor man’s food for many years and often had an undesireable texture. But, Spam was a moist blended ham product which combined ham with spices, salt, and preservatives to create a unique product. Despite speculations to the contrary, Spam only has 6 ingredients.

Hormel wanted to use an under-utilized cut, pork shoulder, for the product. The name supposedly came from the mind of actor Kenneth Daigneau, a relative of a Hormel executive. The name is suspected by many to be a combination of the words “spiced” and “ham”. However, in later years the Spam recipe included ham, leading some to believe that name actually stands for “shoulder of pork and ham”.

The Great Depression saw a steep rise in the number of shelf stable foods that became available. Americans were looking for cheap, high energy foods which didn’t require refrigeration or sometimes even much preparation. The unstable domestic situations of many farmers of the Dust Bowl and the many otherwise unemployed workers sometimes would have had limited access to electricity or proper kitchens. In shantytowns or (Hoovervilles) and Farm Relief camps, many people struggled to even cook for their families. 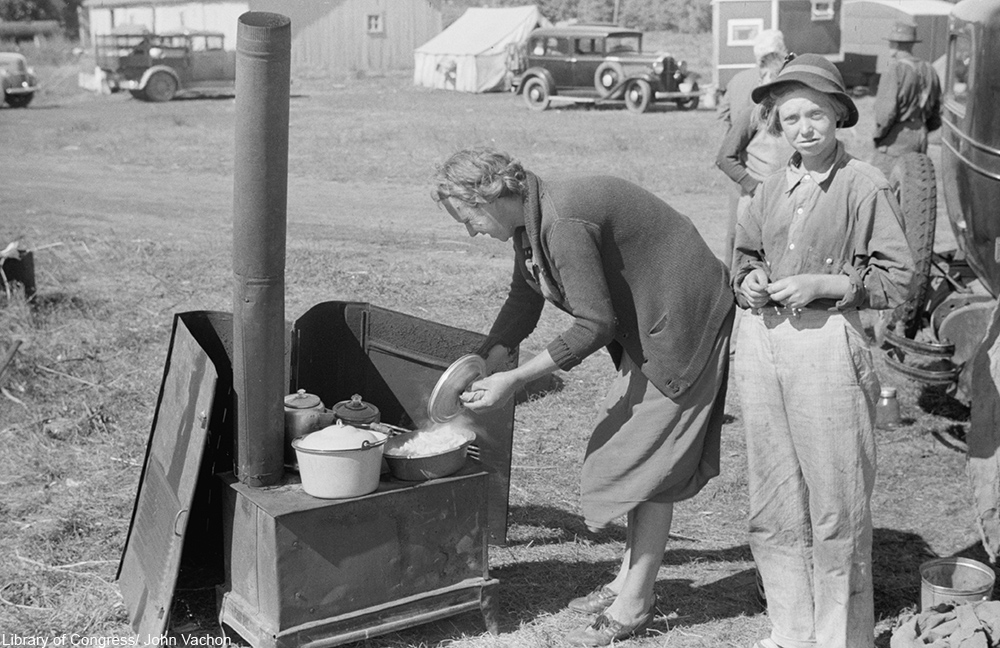 Canned beans, Velveeta, Kraft Macaroni and Cheese, and Ritz Crackers all became regulars at the dinner table for many of these families.

Spam fit well into this scheme, as it was a very compact and inexpensive meat that could keep for months. But, it wasn’t until World War II that Spam really became a household name. During the era of rationing (which began in 1942 for the U.S.) a variety of canned protein options were promoted by the Office of War Information and other government agencies. 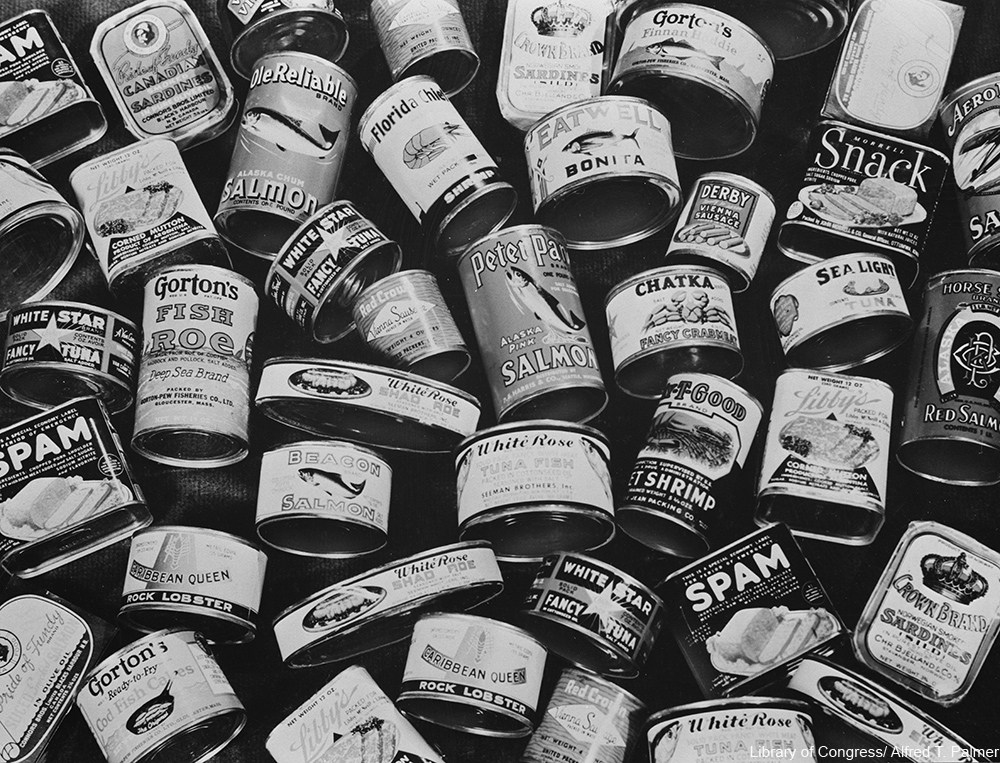 Beans, canned salmon and mackerel, and Vienna sausages were among the many products that were easy to ship and didn’t take away from the meat supply going towards the military. A whole generation of women were using Spam in their recipes and would continue doing so for many decades after.

It wasn’t just at home that Spam was gaining fame. Included in field rations and as part of food aid to various European countries, the pork-based loafed meat became synonymous with the era on both sides of the Atlantic. 150 million pounds of Spam were purchased by the U.S. military during the war, with some less-than-thrilled soldiers complaining afterwards about the canned meat, calling it “ham that failed physical”. On the other hand many soldiers came home with a hankering for it. 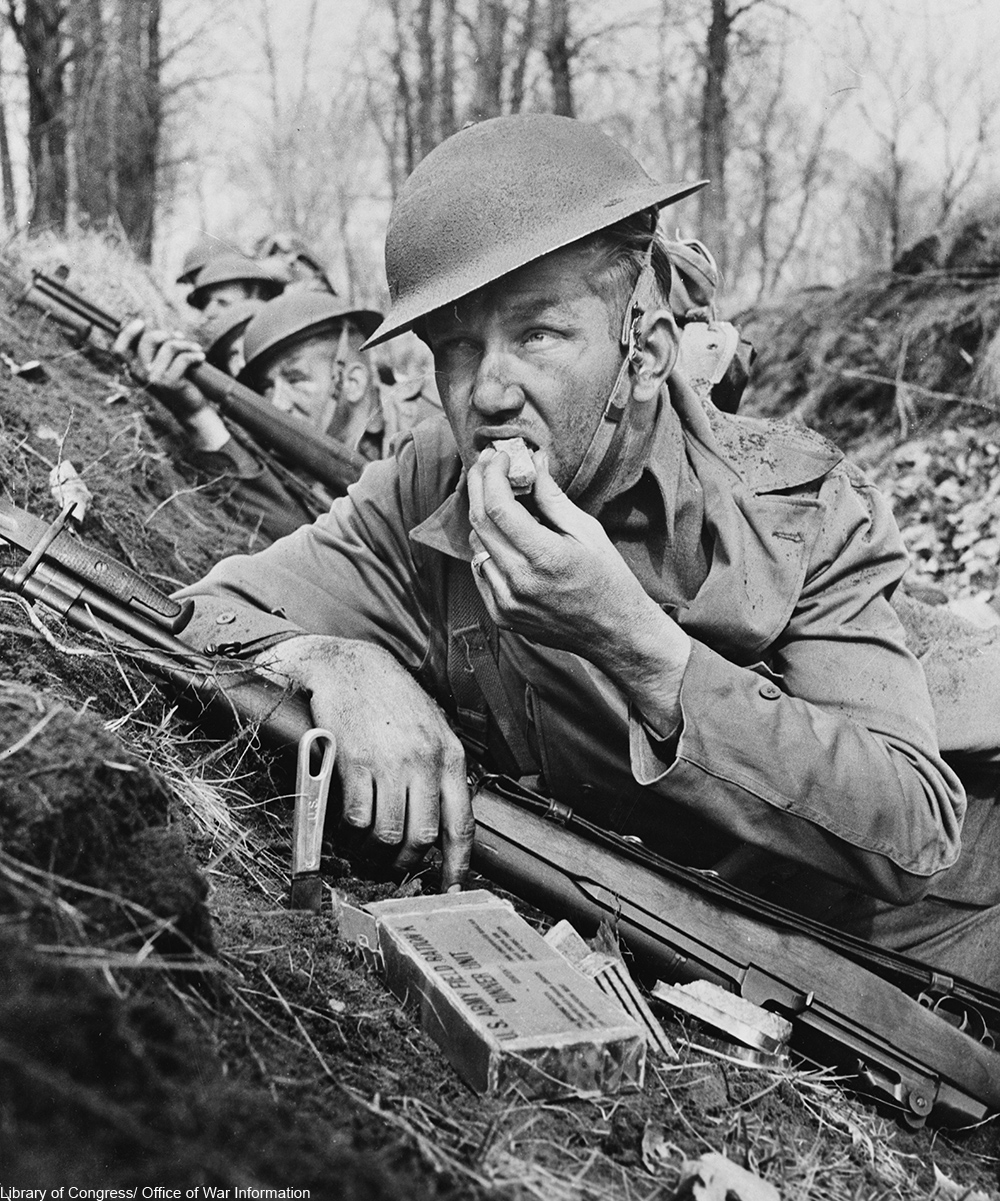 Under the Lend-Lease Act, Spam was also sent to Russian and European soldiers, as well as being supplied in Red Cross packages for American POWS in Germany.

After the war the Hormel girls were a traveling act that toured the country promoting Spam. The 35-woman troop was selected from former military members and was on tour and on the radio until 1953.

My grandmother was an amazing woman. No need to pick her out because every woman in this picture is beautiful. She certainly was an icon for beauty. #hormelgirls #1945 #mymarilyn

The obsession with modern foods in the 1950s meant that Spam, however hated it was by some U.S. soldiers, really took off in the 1950s as part of a growing trend towards casseroles, instant foods, and shelf-stable treats. In Hawaii Spam was introduced during war rationing as well and it grew to become a beloved staple of the island cuisine, with dishes like Spam musubi and Spam fried rice being two of the most well-known. 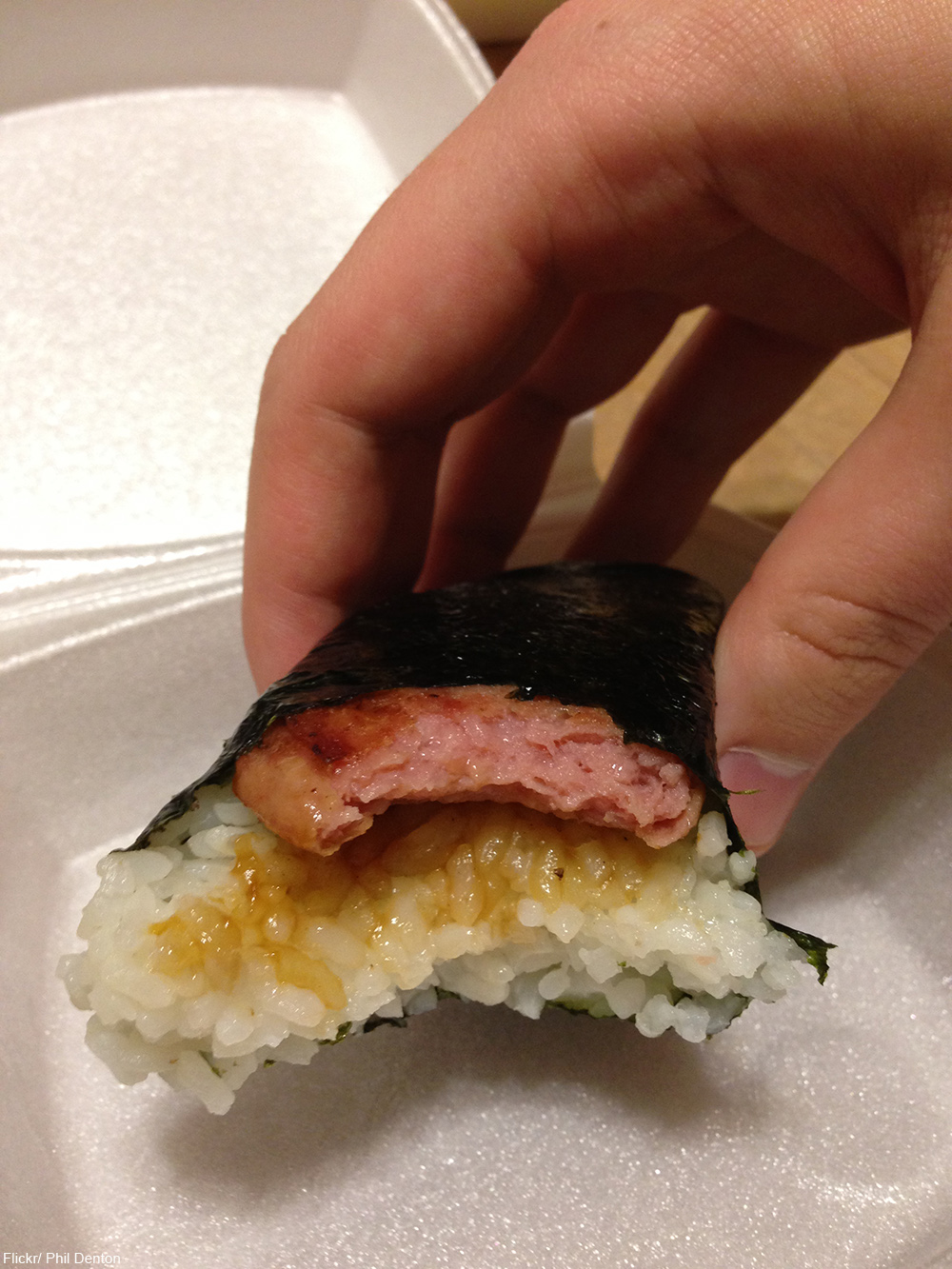 Today, Spam has made a comeback in some circles, while remaining firmly outside the acceptable food limitations of others. Spam is one of those foods that you either love or hate, but most people come to enjoy it if it’s cooked just right. Without rationing during World War II, it is possible that Spam would never have become the controversial favorite that it is today.