The Story of Hachikō, the Most Loyal Dog in the World

In the 1930s in Japan lived a golden Akita dog who was named Hachikō and he was owned by Hidesaburo Ueno, a professor of agriculture at the University of Tokyo. Everyday, the two would travel together to Ueno’s job, where Hachikō would wait patiently for him until his lectures were over and the two would return home together. But, in an age long before cute pet pictures ruled the internet, Hachikō became revered for his endless loyalty, his picture in the papers. 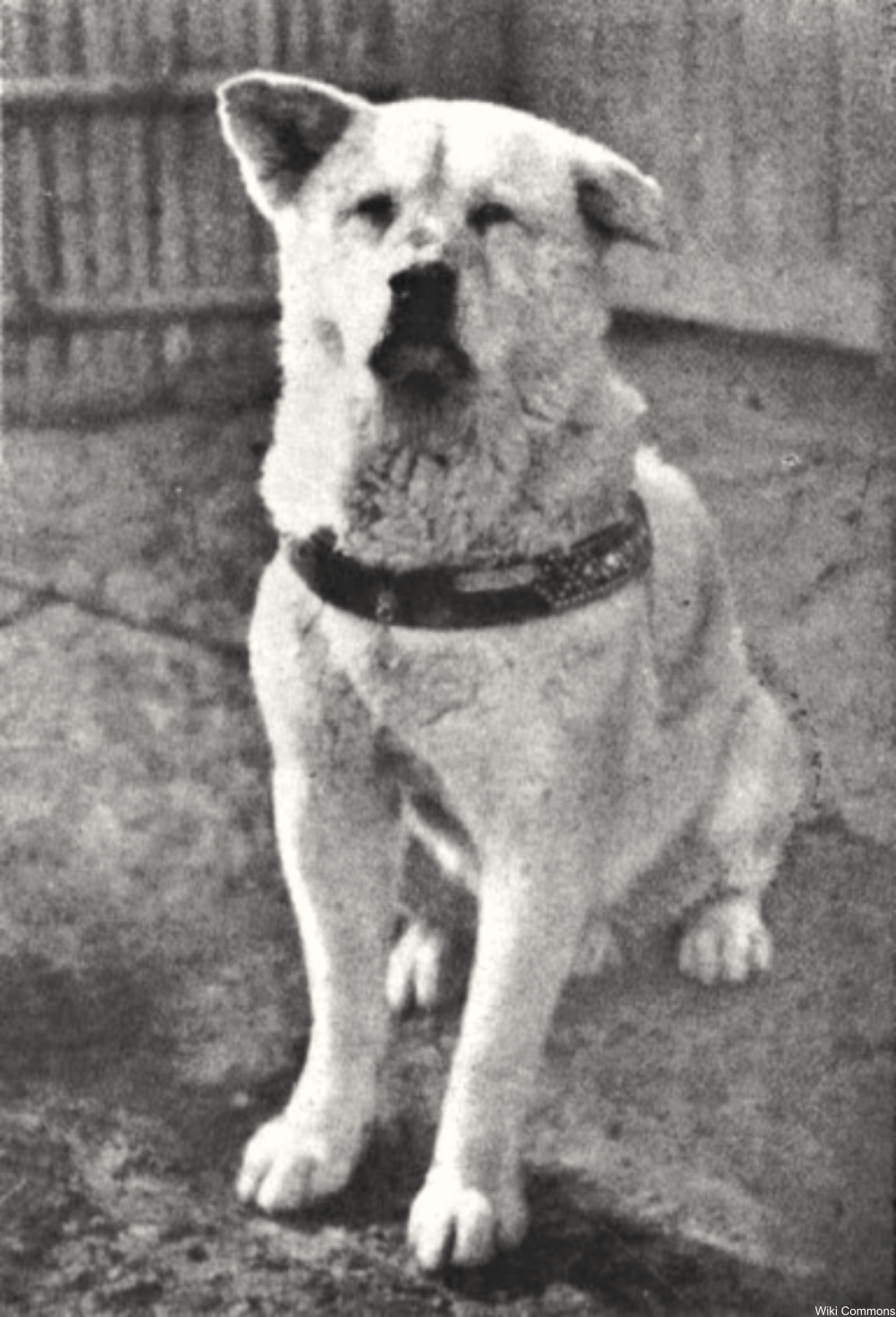 Hachikō towards the end of his life. Via/ Wiki Commons

While his master was inside the building, Hachikō would sweetly wait for him. Because he was such a well-behaved and handsome dog, locals began to leave him treats and he became a well-known figure in the neighborhood.

Ueno got Hachikō when he was a young dog, so it’s no surprise that two bonded the way they did. This would become even more apparent to the outside world when tragedy struck and poor Hachikō was left without a master.

On May 21st, 1925, Ueno collapsed during his lecture and died almost immediately. But, Hachikō waited for him anyways, hopeful that he would come out. Hachikō did this everyday, with some spectators finding him to be a nuisance now that his owner was gone. Hachikō’s trademark harness of embossed leather and his eager face made him unmistakeable on the streets. But, soon, people in the neighborhood began to warm back up to Hachikō when they saw him waiting every single day for his master, rain or shine. 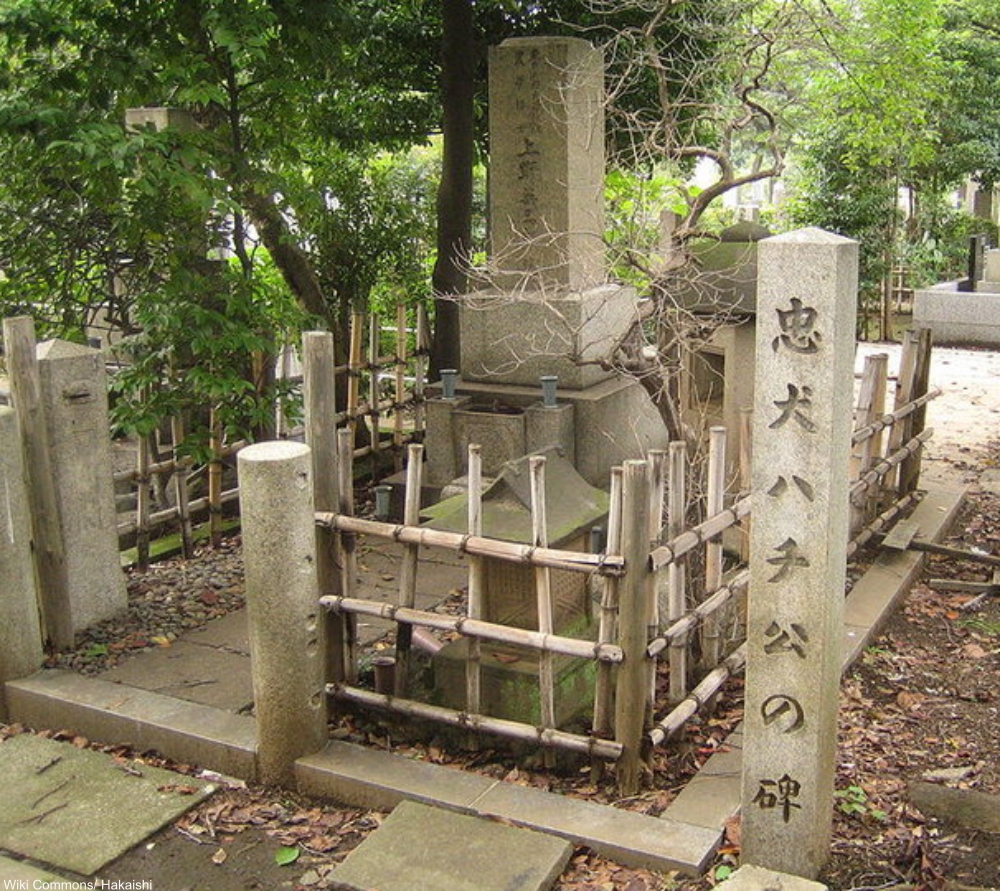 The graves of Ueno and Hachikō, though Hachikō’s body is not interred there. Via/ Wiki Commons

A love like that doesn’t come along everyday and most dogs would probably eventually give up. But, Hachikō, however, was determined to see his master again. He became a staple of neighborhood life. For nearly a decade Hachikō waited at the train station for Ueno, until his little body finally gave in on March 8th, 1935. Hachikō had only been 18-months-old when Ueno died and he clearly never forgot his master for a moment. 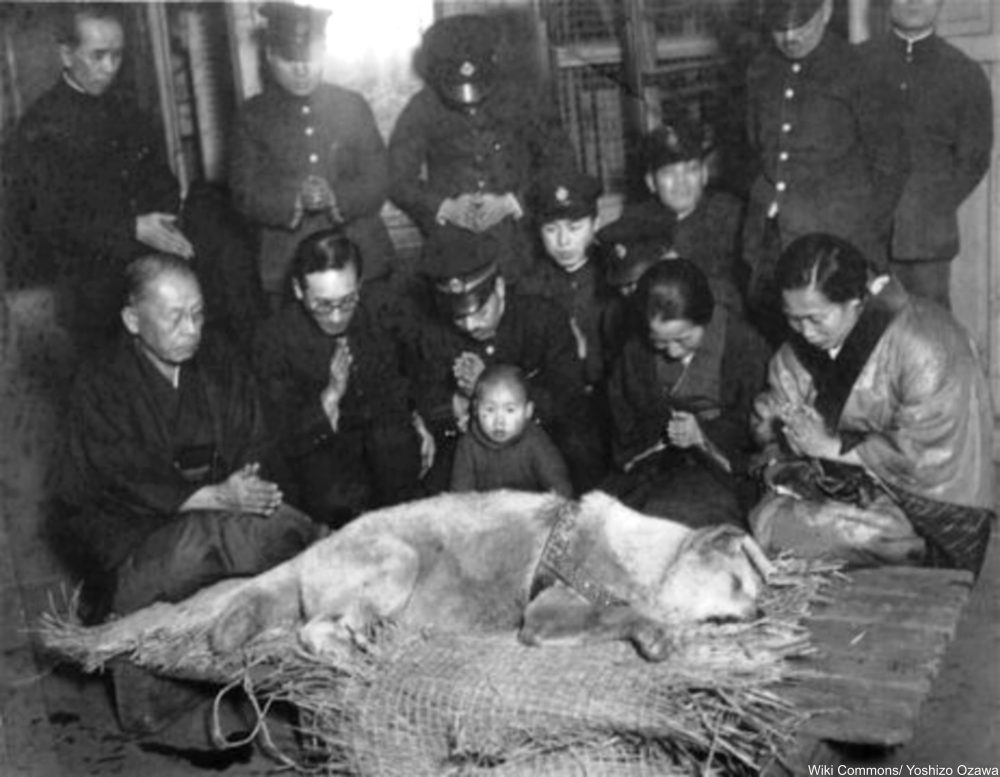 Nearby residents were full of tears and reverence the day Hachikō died, placing his body on a straw mat and palanquiun and then praying over his body before taking him to be autopsied and then taxidermied by a local museum. Hachikō’s body can still be seen at the Tokyo Science Museum today. 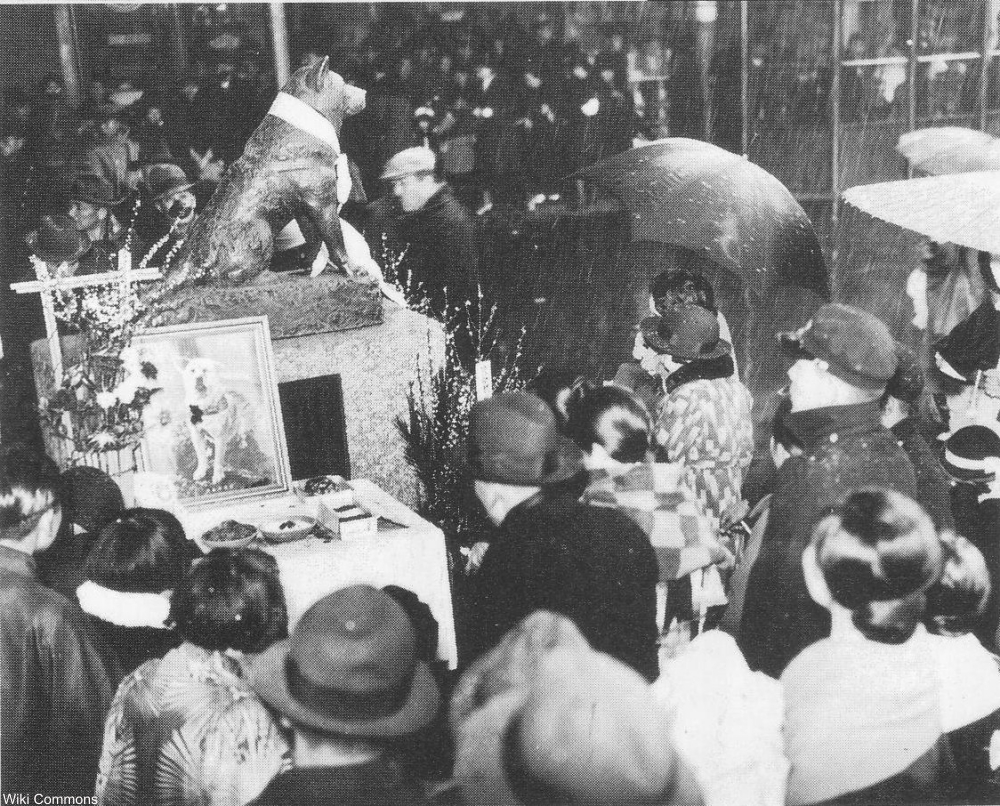 Folks stand in the rain to honor the loyal dog at the statue ceremony on the one-year anniversary of Hachikō’s death, 1936. Via/ Wiki Commons 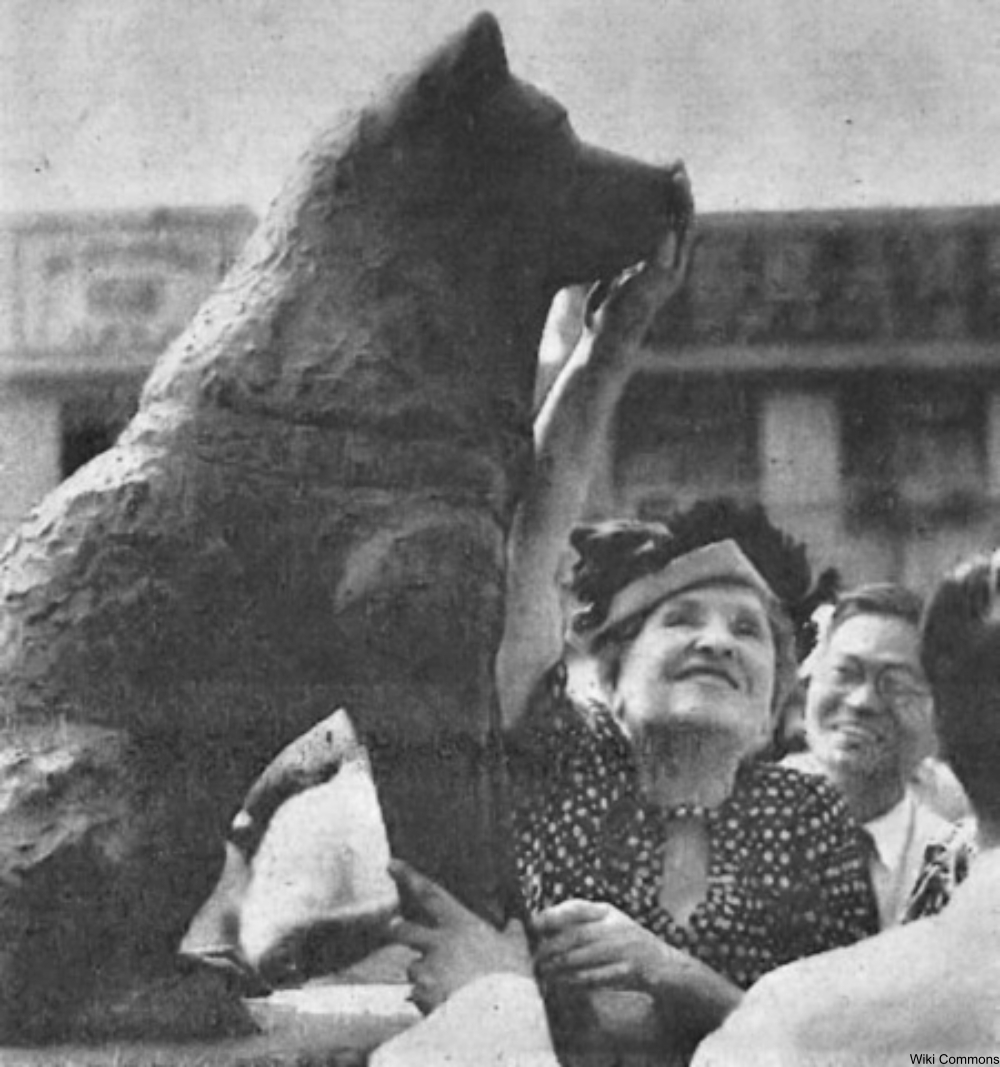 The Japanese press ran with this popular story and soon a statue was erected in honor of the golden Akita with a heart of gold. But, recently another statue was raised that will literally bring tears to your eyes: dear Hachikō and Mr. Ueno once again embracing in a jubilant reunion, the professor putting his briefcase on the ground while his happy dog greets him with a jump. 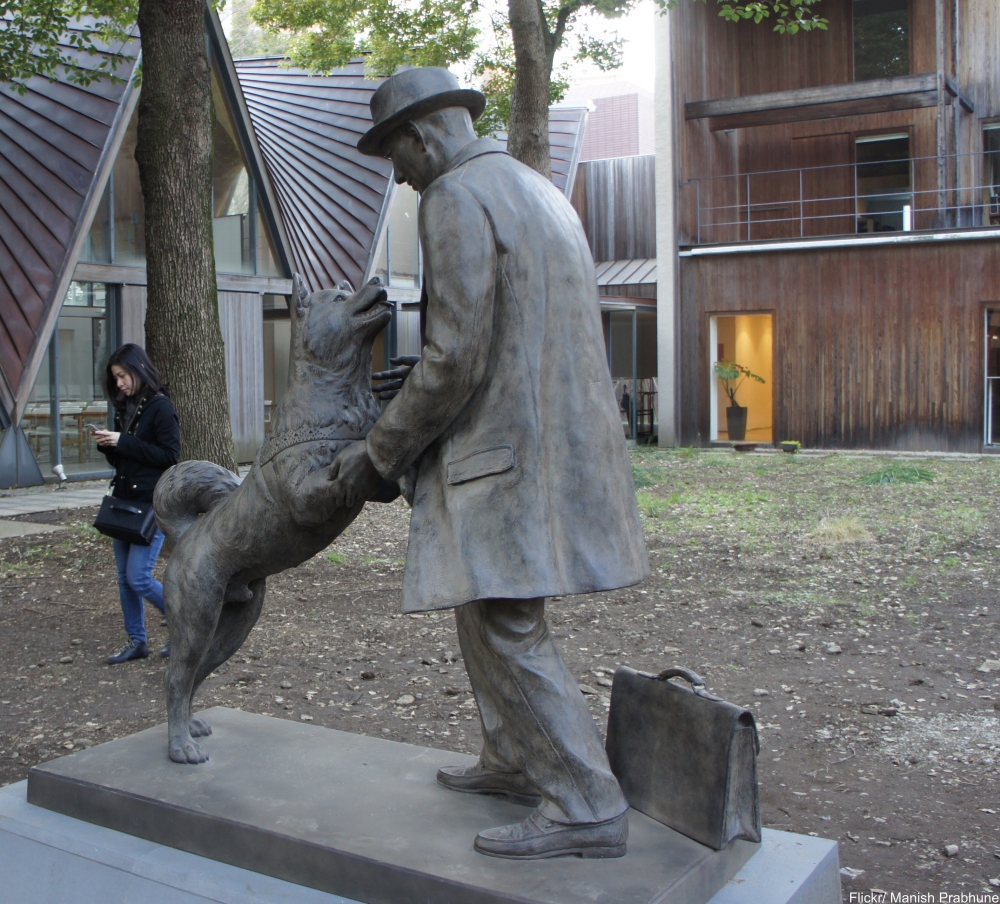 Click here for the story behind the Marine’s most reckless (and most beloved) horse during the Korean War!