The Morbid History Behind the Guillotine Fashion of Revolutionary France

During the turbulent times of the French Revolution, the morals of the average man were in conflict with those of the ruling classes. The extreme separation between the upper and lower classes further alienated the working people of France. Angry mobs roamed the streets, tore apart the homes of the rich, and called for the executions of the wealthiest and most powerful- who they would later mock through fashion. 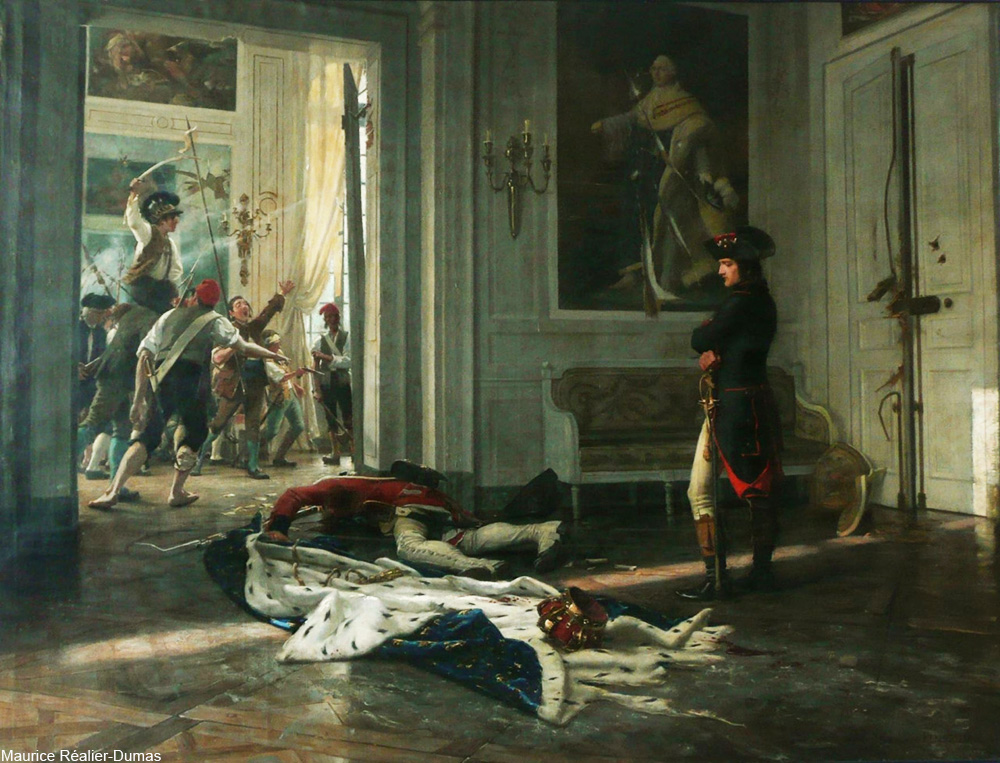 All this was happening while most people had no bread and had hardly any meat. Meat was so scarce that horse flesh, once completely taboo, was served to soldiers, prisoners, and the lower classes as the starving masses attempted to fill their bellies. Fashion also changed drastically. Once upon a time the fashion of the day would have favored the rich in all their finery. But, following a string of executions the fashions grimly turned towards the imitation of those condemned to die.

It sounds incredibly morbid to us today, but at the time the French were not only used to wild fads (think of the voluminous powdered wigs and silk breeches of the era), but the country was going through an extremely hard time. The lack of central government, the mass rioting, and the military coup made for an extremely chaotic situation. Wild dogs were said to roam the streets of Paris, while scores of families went without basic necessities. Under these conditions, one can see how easily the frustrations of the working class were projected onto the condemned.

Those who had been arrested were nearly always of the upper classes or of royal birth, having been found wanting in morality if not in money. Ladies who once wore evening gowns and pearls now suffered through the indignities of prison life, only to be executed quite publicly via the guillotine and their heads displayed on skewers. 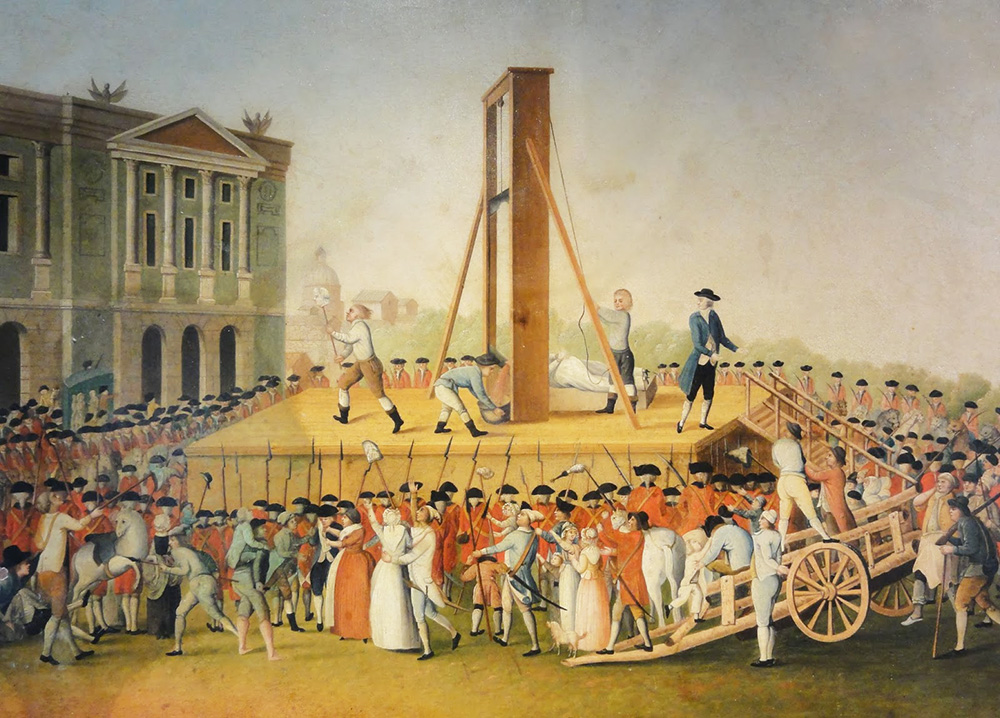 The execution of Marie Antoinette. Via/ Wiki Commons

The Guillotine as Efficient Executor

This use of the guillotine had only come into fashion because of the French Revolution. A doctor named Joseph-Ignace Guillotin had lobbied for a more humane way to execute prisoners. He was an opponent of the death sentence, but sought to at least curb the suffering of the many condemned in France at the time. While he was not the inventor of the Guillotine, his name stuck to the device. 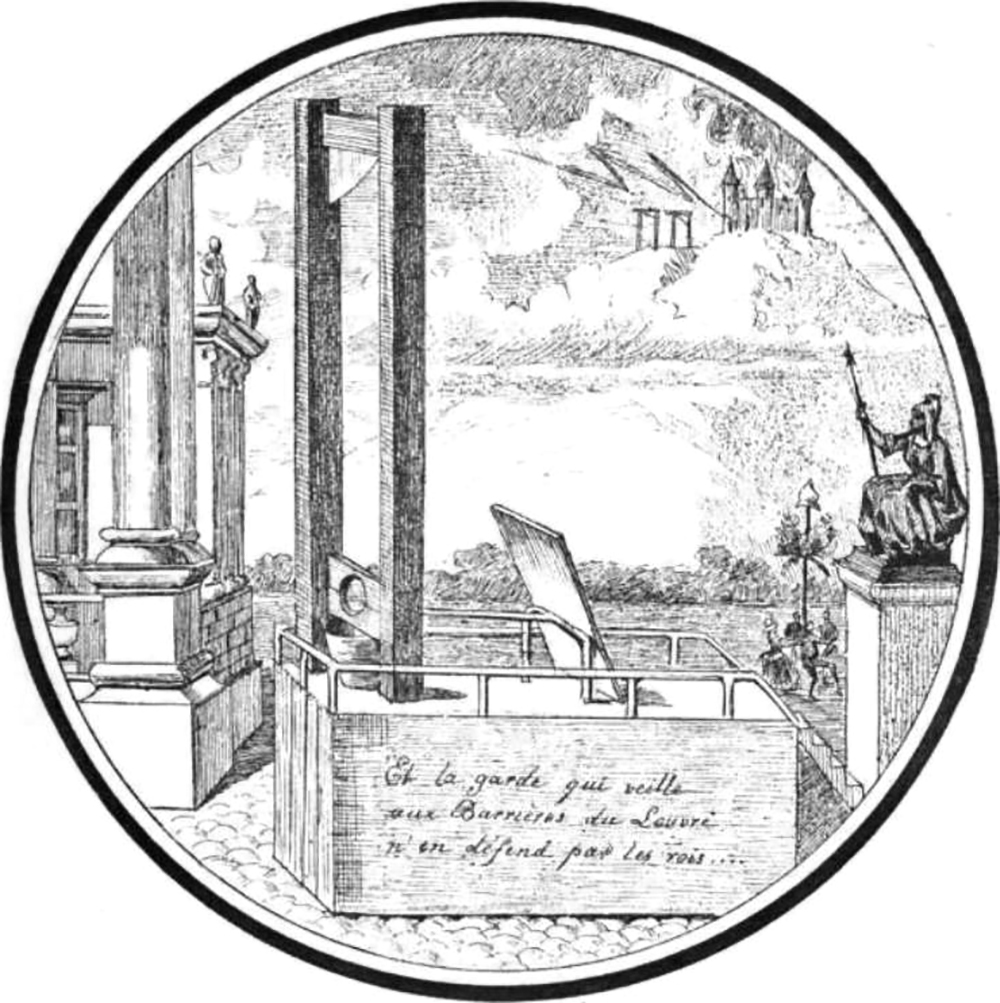 The Committee of Public Safety was sending people to their deaths with rapid speed in what became known as the Reign of Terror. Clerics, royals, and members of high society were all subjected to the guillotine. But, not to be phased by something as trivial as a revolution, French women adopted guillotine fashion as their own.

In a show of support for the cause women began to mimic the “fashion” of the public execution grounds. Women who were held prisoner were often subject to having their hair cut quite roughly. In an attempt to lessen their pain, many of the condemned women cut their own hair into short hairstyles. This look was called the Titus (so-named after a previous haircut trend for men). We might call this a rough pixie cut these days, but it was done to ensure that nothing interfered with the blade of the guillotine. 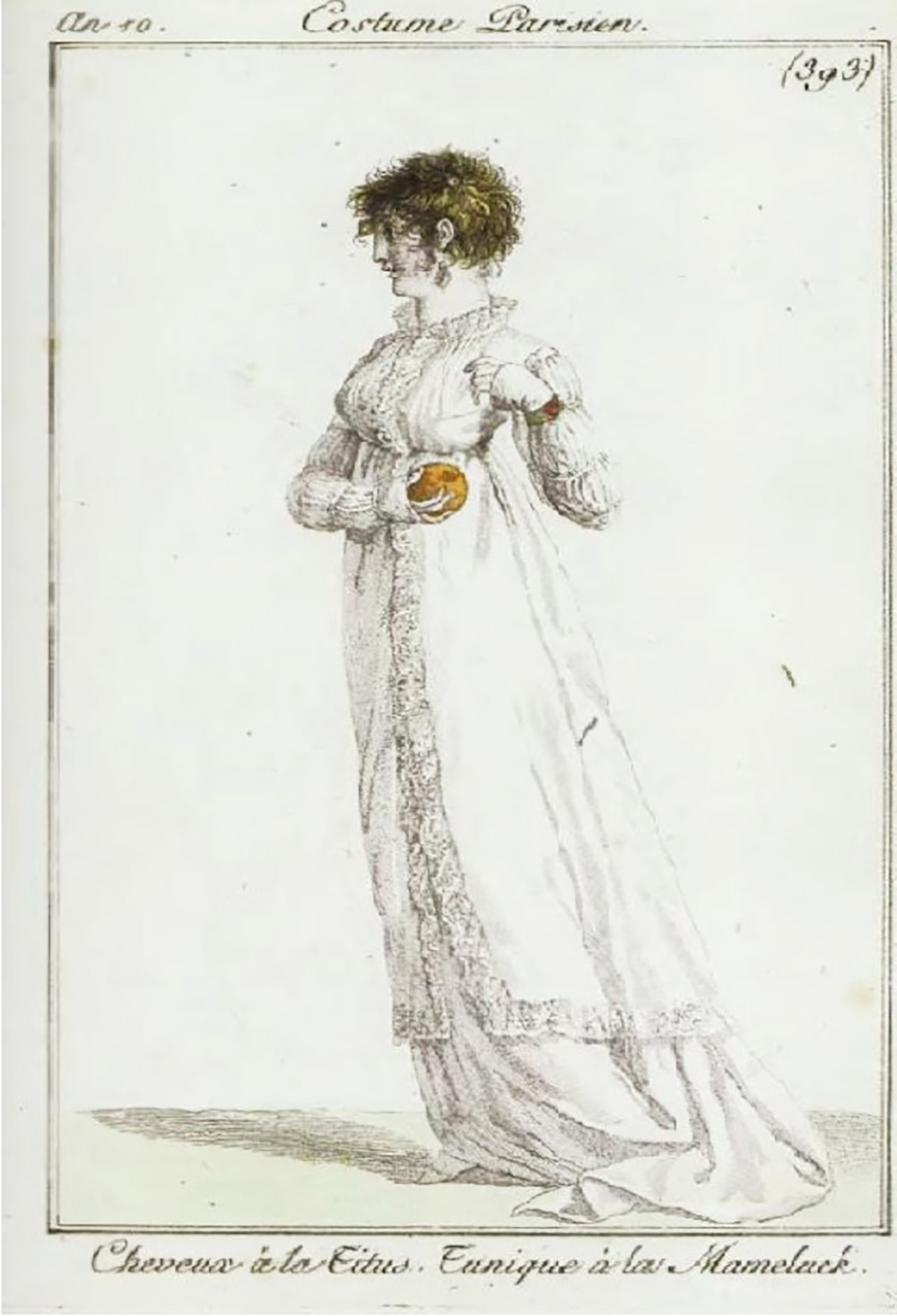 Women also began wearing chokers to symbolize where the guillotine would strike the victims on their necks. Unlike the pearls of wealthy, these chokers were often made from much more affordable materials like ribbon or lace. 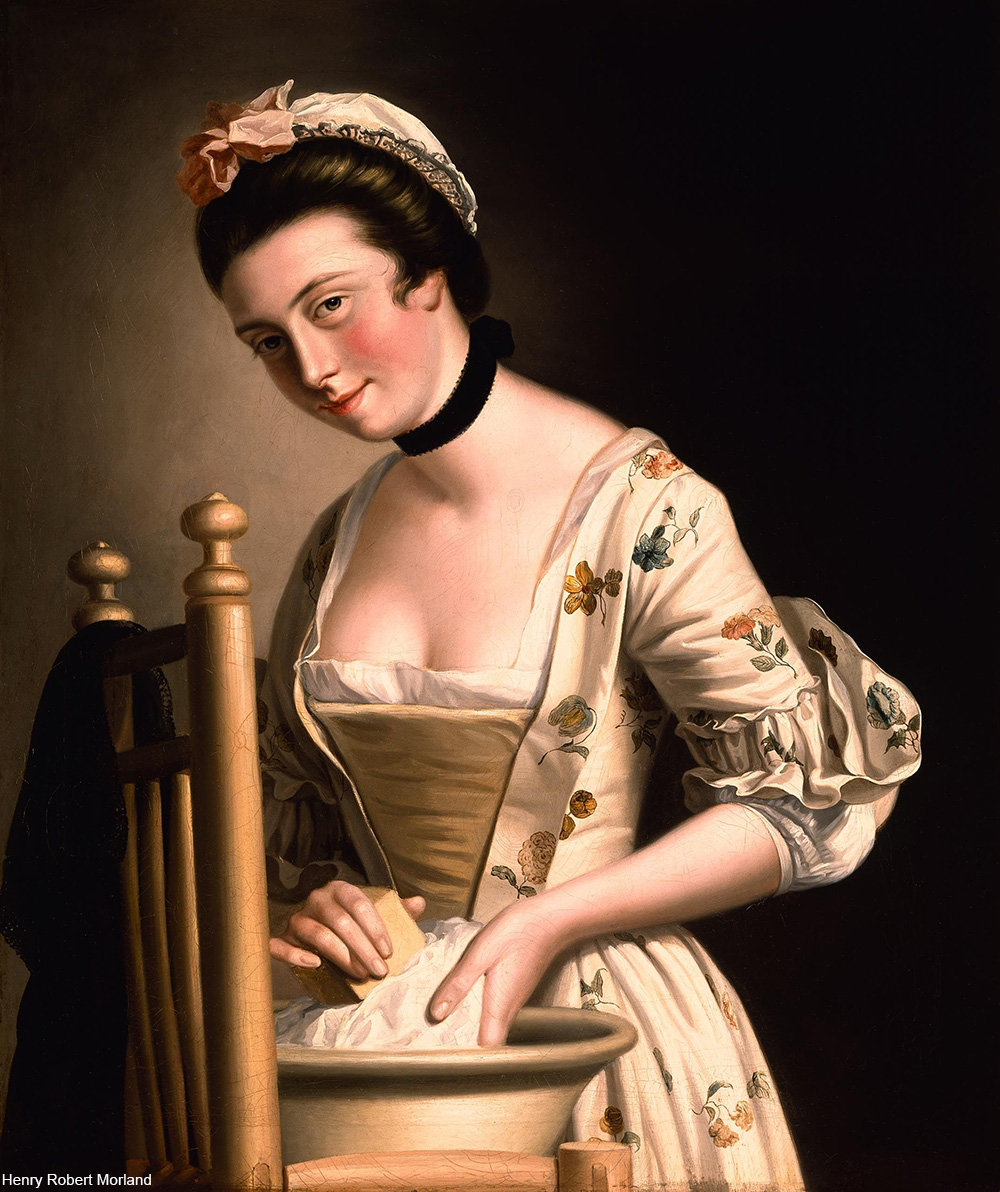 Women also wore red shawls. The red not only symbolized blood, but was a direct imitation of Charlotte Corday, executed on July 17th, 1793, for assassinating Jacobin leader, Jean-Paul Marat. As she ascended the steps of the guillotine platform to be executed, the masses ogled the red shawl she wore. Red shawls became terribly fashionable thereafter. 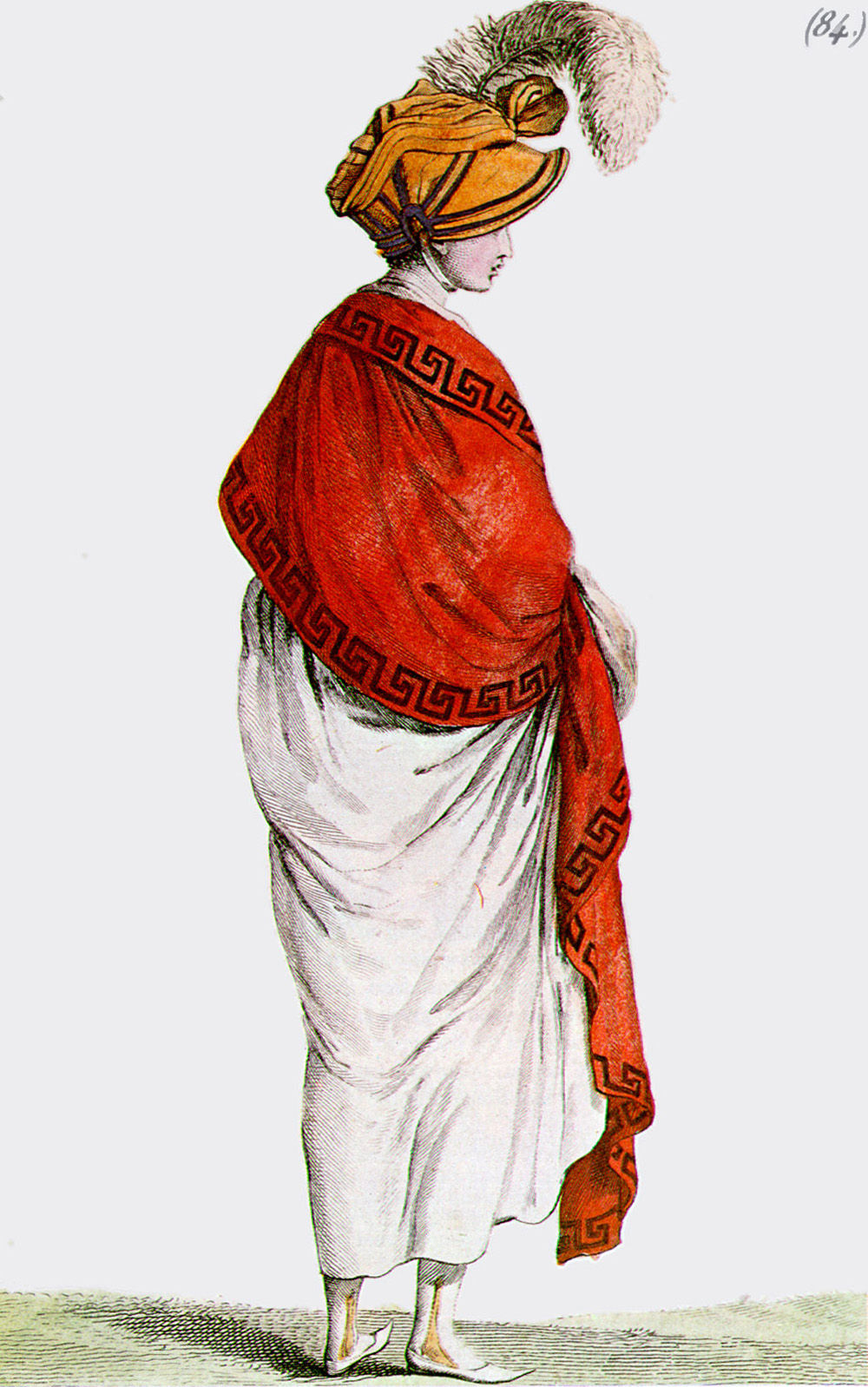 During her reign, Marie Antoinette had shocked the public when she posed for a painting wearing a cotton chemise dress, something which brought to mind images of the bedroom for many French citizens. It was wholly inappropriate, but what made matters worse was that a queen should sit for a royal portrait wearing a cotton dress. It seemed as if she was shrugging her status while at the same enjoying all the benefits of being queen.

Then after her arrest, she spent months in prison and (long after the king had already been executed) was finally led to the guillotine platform. That day Marie Antoinette wore a simple white chemise, issued to her by the prison. As a symbol of their hatred for her, the simple cotton shift in white caught on with female members of the public as a fashion sensation. 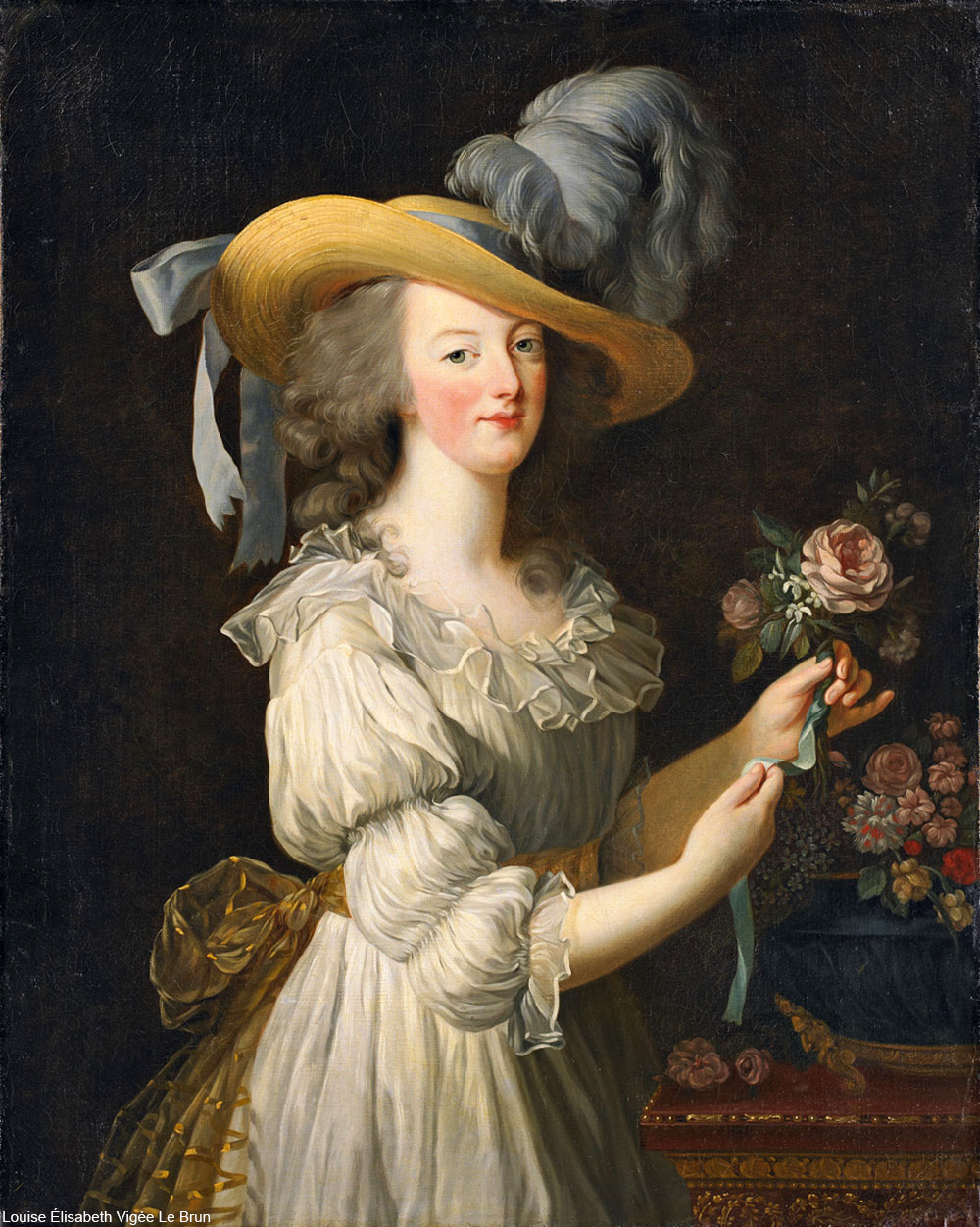 The morbid trends didn’t stop at clothing, jewelry, and hair. The fashion à la victime of the day celebrated not only the style, but also the prisoners themselves. Victim lunches and parties for the recently-released from prison known as bals à la victime celebrated those who had not ratted out others and had somehow also escaped the guillotine, though there is now some doubt about how many of these parties were actually held.

The guillotine chic fashion trends of Revolutionary France show just how complicated a time it was: full of uncertainty, death, murder, and scarcity. But, it was never lacking in powerful fashion statements.