Some of our very favorite vintage items are from the kitchen. We’re talking Jadeite, apricot glass, and Sunbeam mixers. These little touches can really bring a kitchen to life and remind us of another era when the kitchen was where all the magic happened. For many people one type of relic that holds special sway are vintage spice jars. The most coveted of these seems to be the Griffith’s milk glass jars with their distinctive Art Deco styling. Find out more about these lovely jars below. 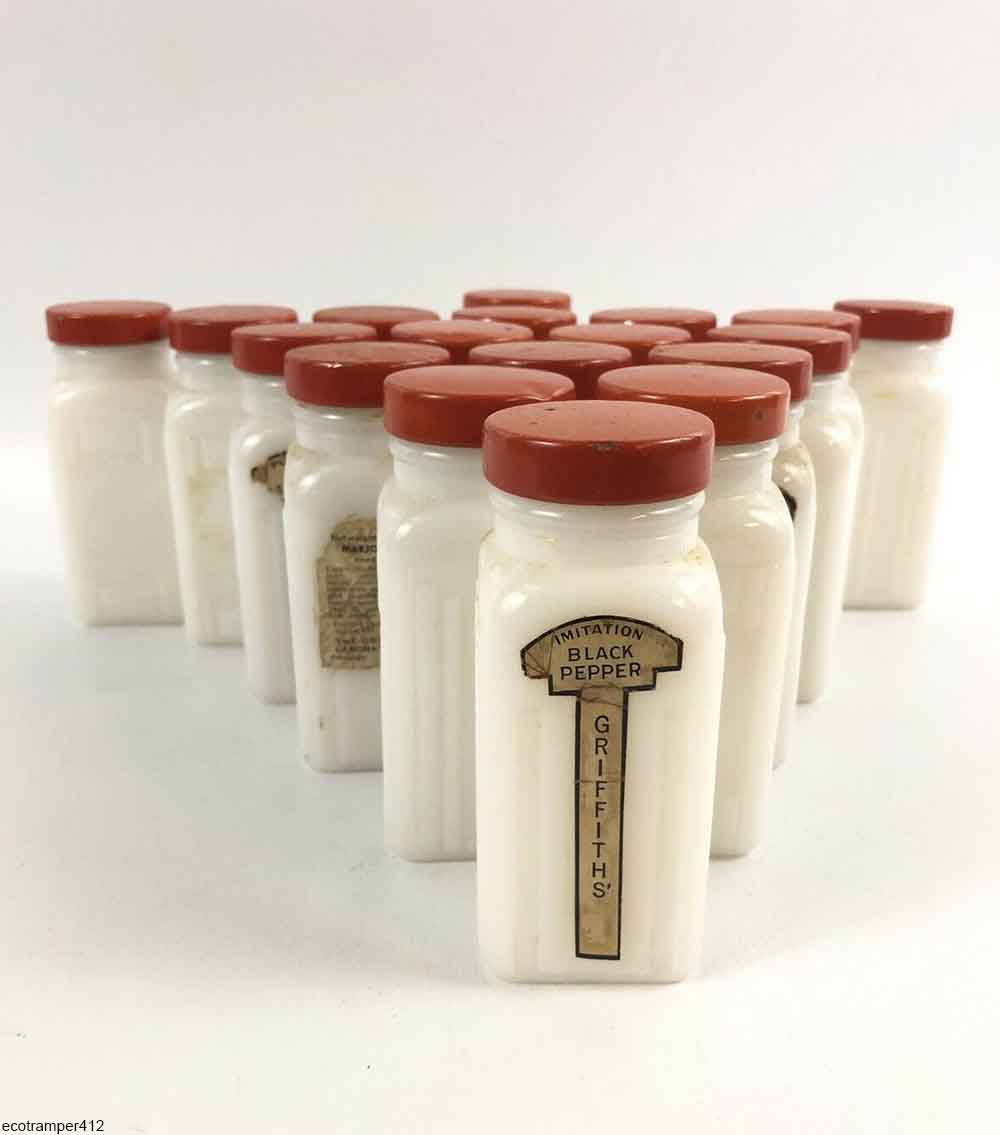 Griffith Laboratories was looking for a way to make their company a household name when they came up with the idea of creating beautifully-designed spice jars filled with their high-quality spices. As with many products at the time, promotional items were a way to gain traction in a given market, a strategy which worked particularly well during the Great Depression.

During the 1930s most families were on a strict budget. However, the new Streamline (AKA Art Deco) styles in home decor piqued the interest of many housewife. If one had to buy spices anyways, why not buy them in stylish jars? The jars were in production from the 1930s until the 1950s. 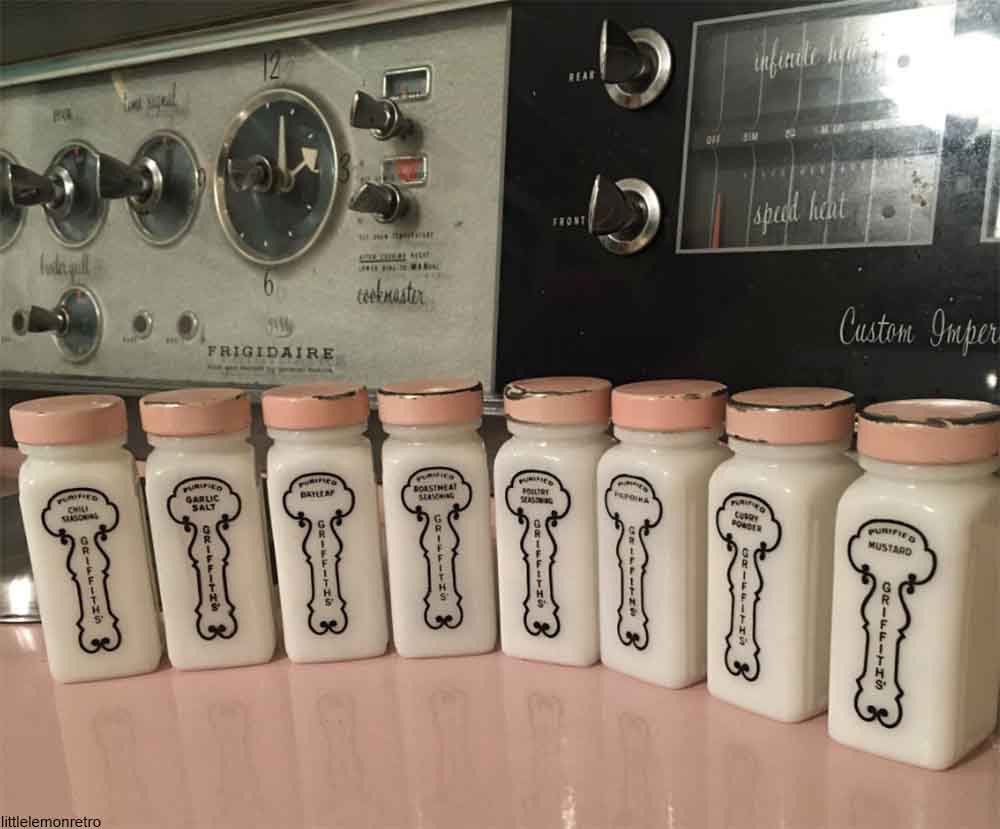 Griffith Labs used a special production method to ensure that the spices were sanitary, hence the phrase “purified” which appears on many of the spice jar labels.

The Types of Jars

Griffith spice jars were sold in sets of either 8, 12, 16, 18, 22, or 24. Early sets came with their own stands. During World War II when nearly all metal was being used for the war effort, the racks were made from plastic. In the post war period they were made with metal again. In the 1950s the company also released a wooden wall-mount spice cabinet with glass doors- a design which went well with the Western and colonial styles of decor which were so popular during the decade.

The milk glass jars were usually white, although Griffith did make other colors like a lovely dusted coco color. Most of the jar designs had distinctive vertical labels, each one emblazoned with “Griffith’s”. The early jars were molded with the designs on, while later jars was made plain and then paper labels were added later. Today, many of these paper label jars are now missing their labels completely.

Griffith’s also made several colors of lids, to match a variety of different kitchen schemes. Red, black, yellow, pink, and green were just some of the many colors they produced. Often the rack for the rack would be coordinated to match the lids. The back of the jars would indicate how the spice was commonly used.

During this era many women cooked with a minimum of spices, using salt, pepper, allspice, and cinnamon most often. Spices like sage, curry, and mace weren’t new, but many families at the time ate plainly and ethnic foods were not yet common.

For a lot housewives, a set like this would have not only been a lovely decoration and an efficient organizational tool, but it would have also been a chance to try new flavors that up until then had not been part of the standard fare. 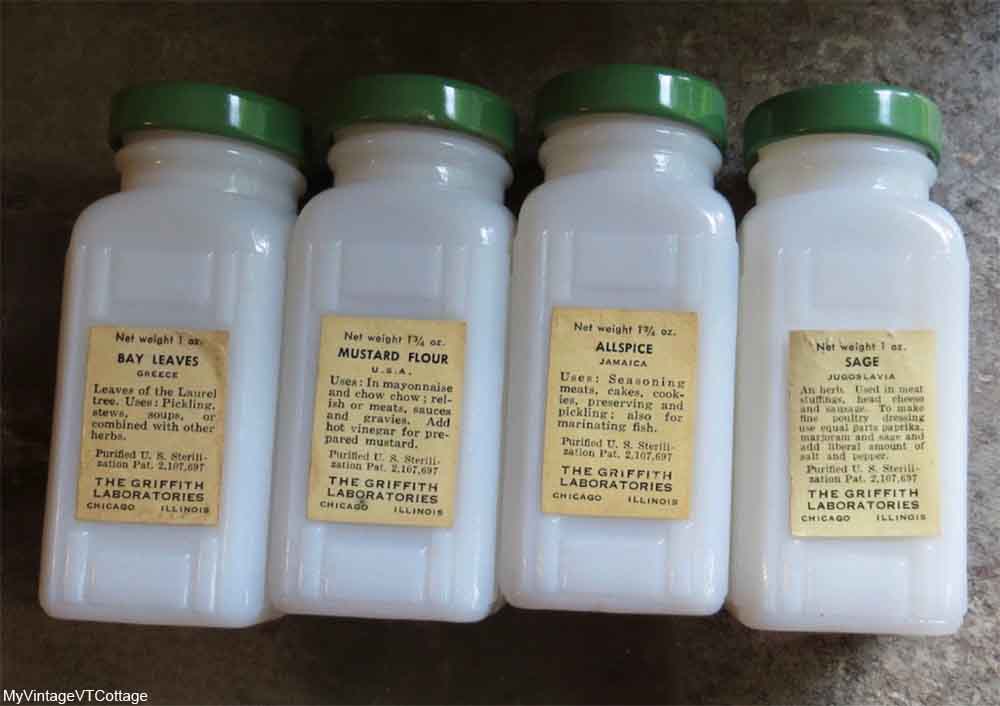 Today there is little else as iconic as these spice jars for a retro or vintage themed kitchen, although most home cooks probably have more spices in their cabinets than would have been included in the original set. The jars have proven to be so popular and durable that there is now a market for replacement labels and lids! 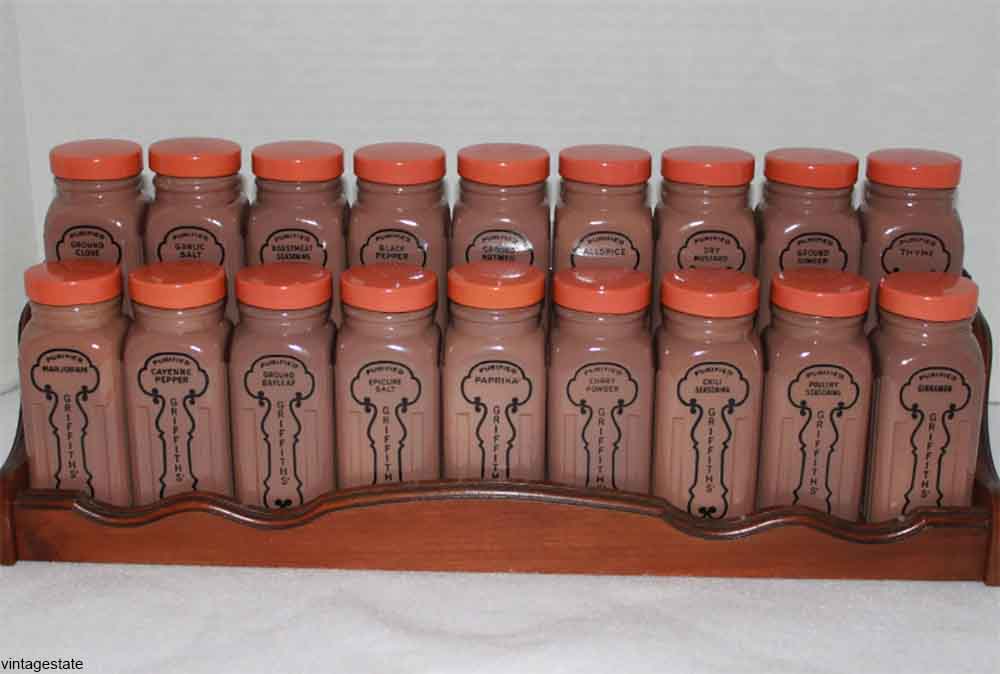 Prices vary on these collectible jars. Because so many were used well, the lids and labels on many of them are today in less than stellar condition and this affects price. You can find the odd jar alone at antique and thrift stores for around $5, but the most popular are the full sets with their original stands. Full sets can vary in price from $30 to more than $150 depending on condition and rarity. For example the aforementioned coco color tends to be rarer and more sought after than the white color.