It’s no secret that most slaves in the South didn’t live all that long. They had none of the conveniences that white people did at the time and were often so badly mistreated that their lives were cut drastically short. When they were ill the doctor was not called for them and they were subject to all the dangers of the day with little-to-no help: poisoning, measles, TB, typhoid and more.

To add to that they were often badly mistreated and many went without proper coats, shoes, or fuel to run a good fire. They also had to suffer beatings and other corporal punishments from slave masters or overseers. 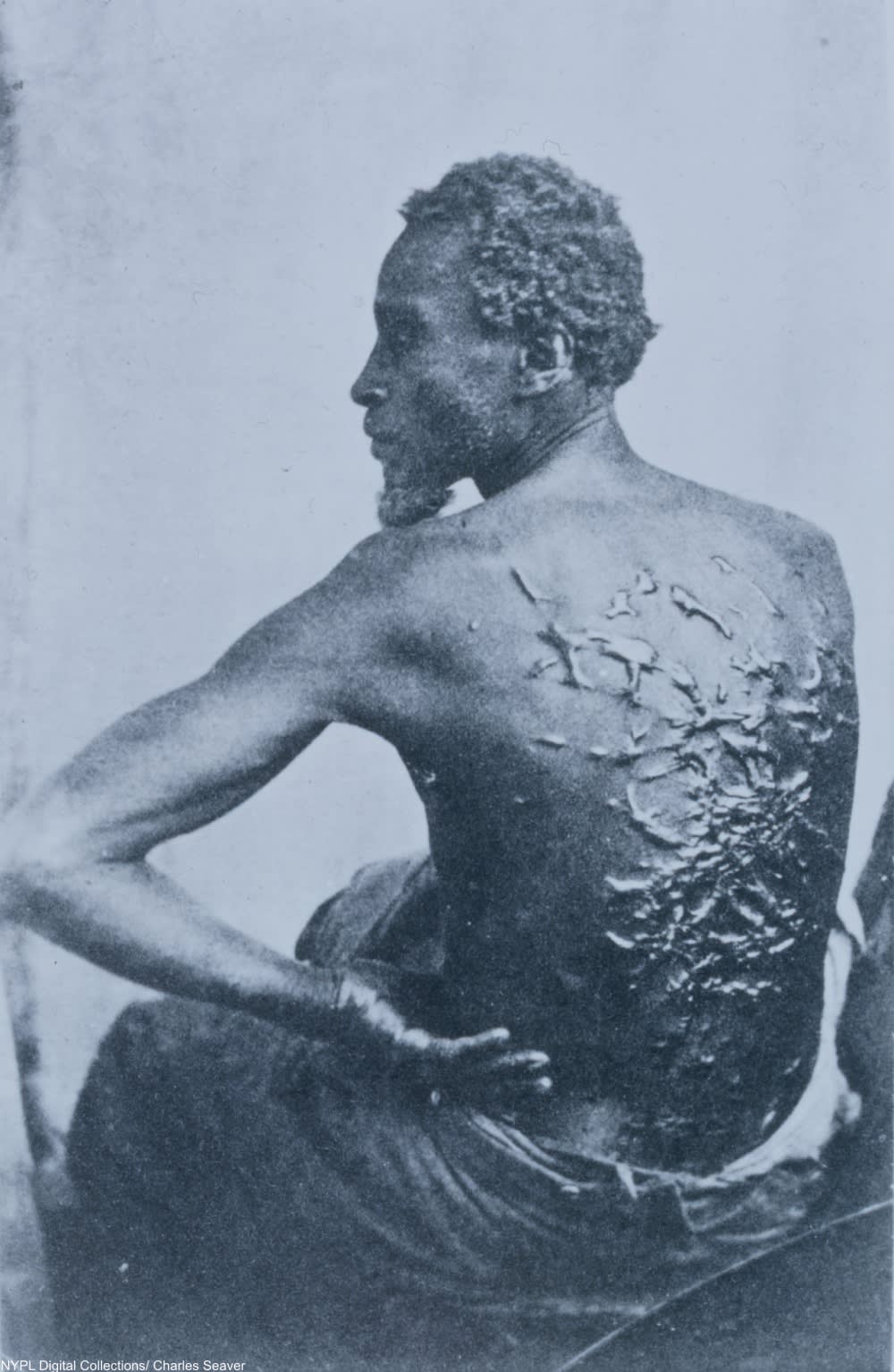 “The furrowed and scarred back of Gordon, a slave who escaped from his master in Mississippi and made his way to a Union Army encampment in Baton Rouge, Louisiana, 1863.” Via/ NYPL

Many newly-abducted slaves died on the crowded slave ships to the U.S. and once arrived they were exposed not only to the harsh conditions of slavery, but also to all manner of diseases that they had no immunity to whatsoever. Given all this it is not surprising, however sad and horrific, that enslaved persons often did not live long lives.

The average life expectancy of a slave was around half that of a white person and some estimates are that their risk of death throughout life was twice as high as a white person. 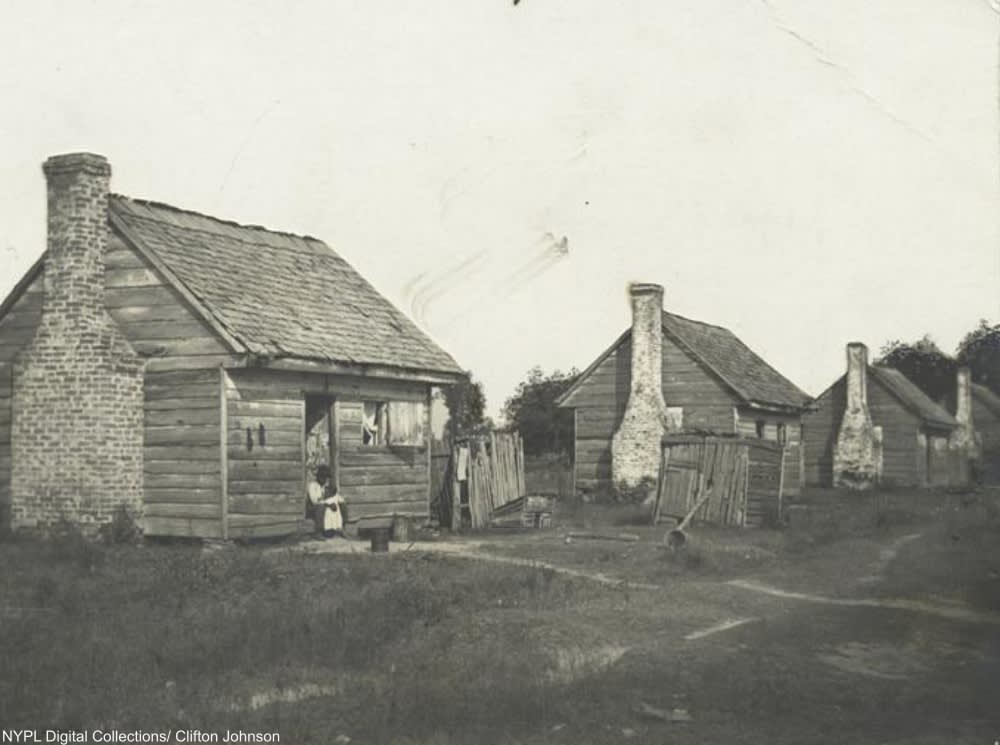 Given all these factors for poor health, injury, and disease, an enslaved person could only expect to live to be around 20-years-old and poor whites usually lived to be about 40-years-old. So it’s incredible that the oldest woman in New Hampshire in 1867 had been a slave and people were eager to read about her in the newspapers. 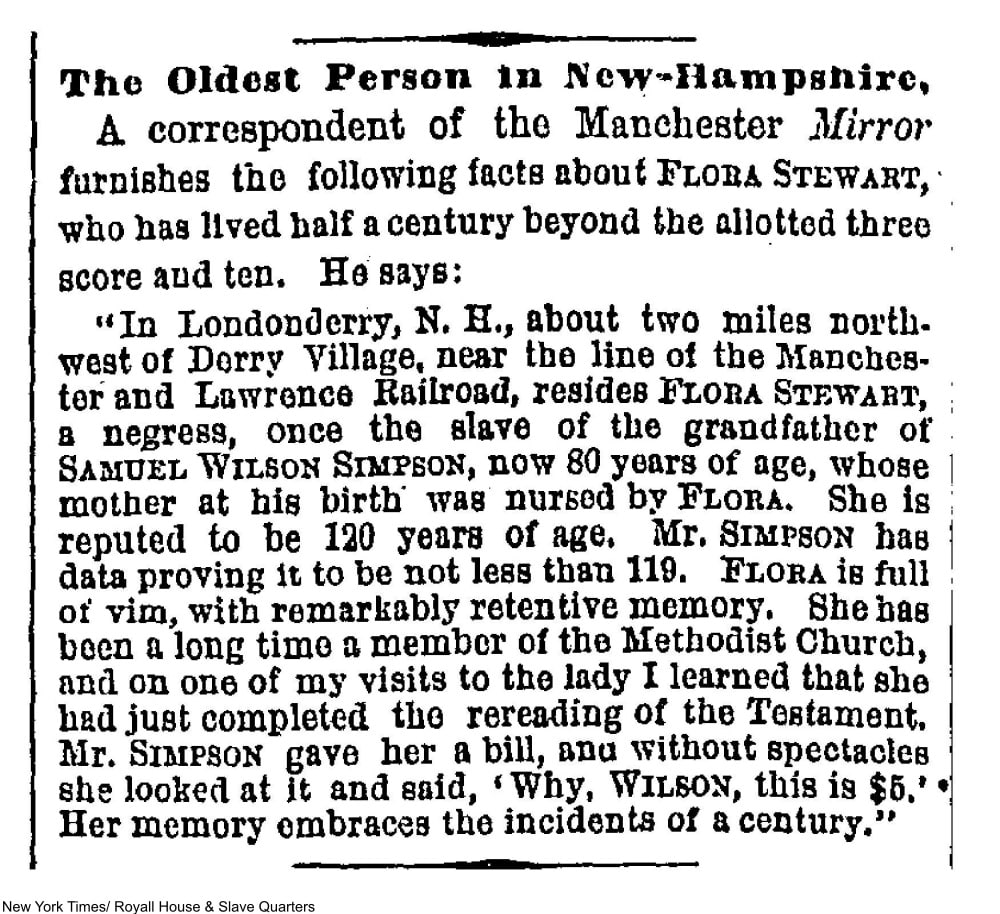 Her name was Flora Stewart and she had been a slave who was thought to have been freed around 1810. She moved to Londonberry, New Hampshire, in 1810 where we can only assume she did well based on her supposed age and the very fine clothing she wears in the one photograph that exists of her. She holds a cane and her dress looks to be made from silk or taffeta, with finely scalloped trim in rows up and down her gown.

At the time she claimed to have been no younger than 119-years-old and with proof, though we don’t know what proof that was. There is some evidence that she was listed on the 1760 census as having been born in 1756. However, the first federal census wasn’t until 1790 and in 1760 only some states had held their own census. 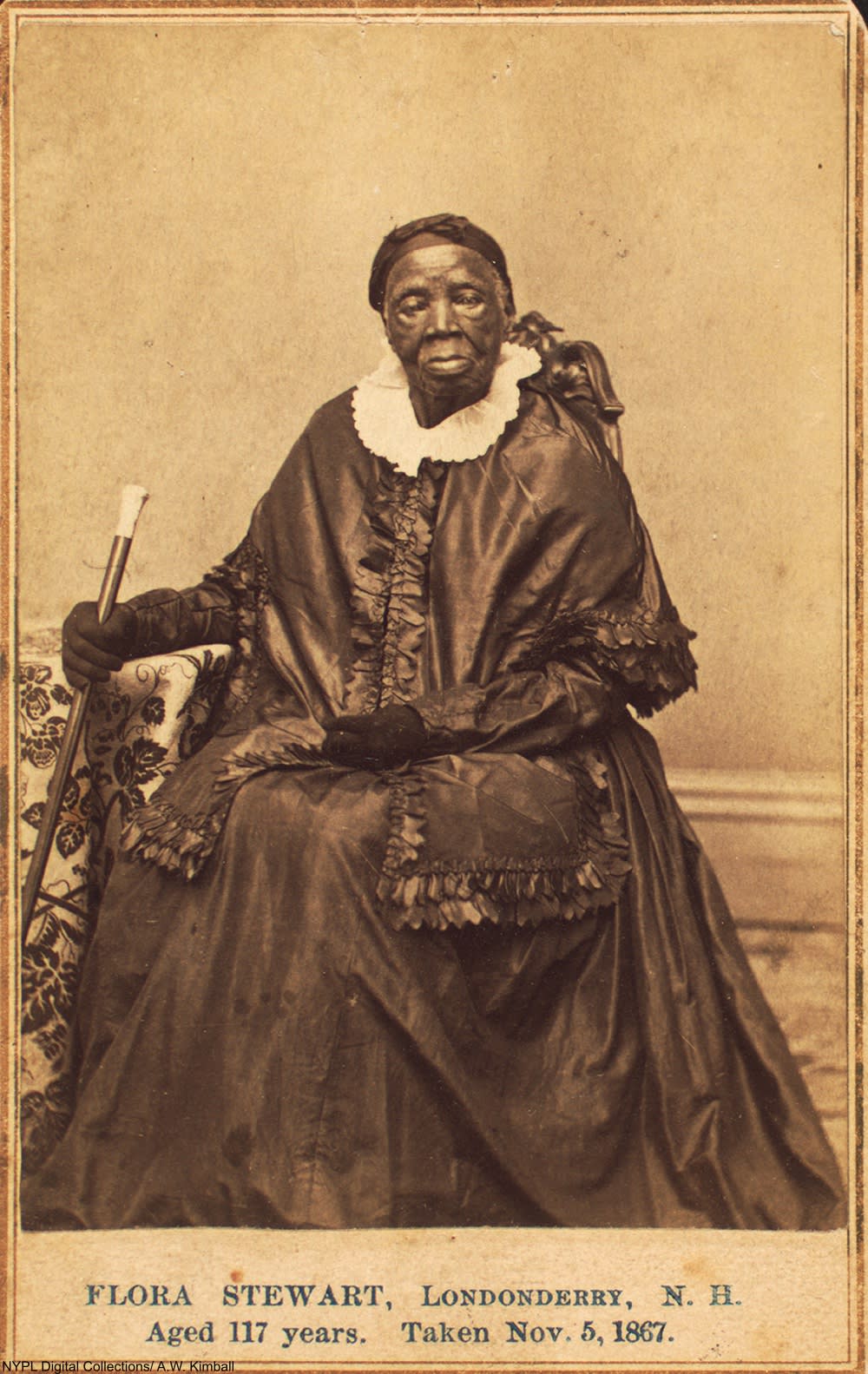 Flora died in 1868, in the year following this photo, which was taken at the home of Governor Frederick Smyth, and was circulated along with her unique story. She is buried in Valley Cemetery. From the 1867 New York Times article about Flora:

“A correspondent of the Manchester Mirror furnished the following facts about FLORA STEWART, who has lived half a century beyond the allotted threes score and ten.

“In Londonberry, N.H., about two miles northwest of Derry Village, near the line of the Manchester and Lawrence Railroad, resides FLORA STEWART, a negress, once the slave of the grandfather of SAMUEL WILSON SIMPSON, now 80 years fo age, whose mother at this birth was nursed by FLORA. She is reputed to be 120 years of age. Mr. Simpson has data proving it to be not less than 119. FLORA is full of vim, with remarkably retentive memory. She has been a long time member of the Methodist Church, and one one of my visits to the lady I learned that she had just completed the re-reading of the Old Testament. Mr. Simpson gave her a bill, and without spectacles she looked at it and said, ‘Why Wilson, this $5.’ Her memory embraces the incidents of a century.”

It’s incredible that just a year before her death she was said to have been of sound mind and mental health with good eyesight and hearing! Most folks who make it more than 100 years often have severely impaired hearing and vision, with steadily declining mental abilities. Of course there are those who doubt that Flora could have been that old, bearing as it would have meant she gave birth to her last child in her 60s!

We’ll never know if this woman’s age was correct, and many “oldest person” stories are fabricated. But, her age is not unlike some of the oldest people on record today, so the number is not an unfathomable one. However hard to believe her story was, it was all the more extraordinary considering that her life before freedom must have been very hard indeed.

Discover the secrets of the oldest woman who ever lived: Click “Next Page” below!