The Revolutionary War Attack Vessel You Never Knew About

We think of submarines as high tech inventions of the 21st century, but you might be surprised to know that the first combat submarine dates all the way back to the Revolutionary War! This vessel was humbly named the Turtle and looked somewhat like a spherical barrel.

In 1777 the U.S. made some important headway on administrative tasks of the new government and had many victories over the British army. The stars and stripes flag design was approved by Congress and the Continental Army won battles at Ridgefield, Bennington, and Princeton. 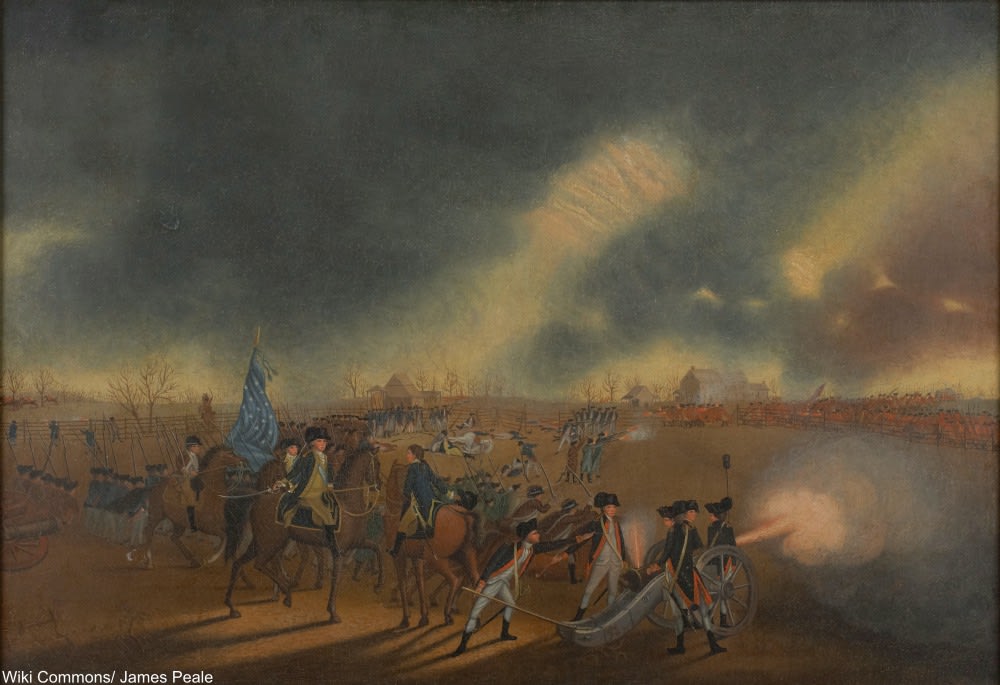 Battle of Princeton by James Peale. Via/ Wiki Commons

But, the loss of Fort Ticonderoga, the relentless stream of British troops, and strategical deprivation of supplies for the U.S. soldiers by the British meant no rest in sight for American forces. And the British Royal Navy far surpassed the Continental Navy. Army commander-in-chief George Washington was willing to try nearly anything in order to win.

Plans for the submarine were first drawn up in 1771, and Washington approved funds for its construction only after heated debates over the costs. The craft was to carry a time bomb underwater to be affixed to British naval ships covertly through a screw mechanism. The first attempts to use the Turtle were held in 1776, but did not go well. 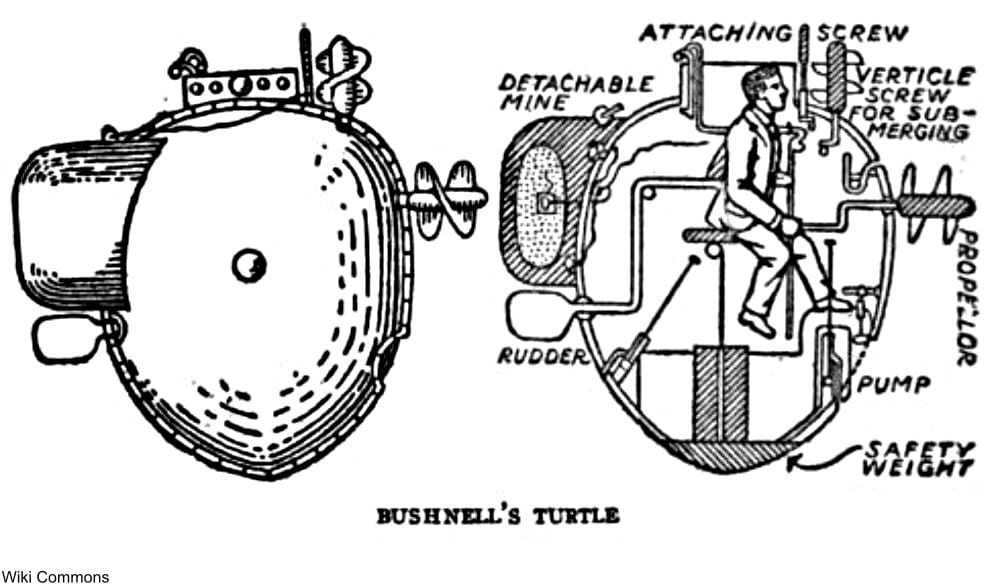 The concept for this ingenious design came from the mind of David Bushnell, a Yale student with an aptitude for invention. The drawings for the Turtle clearly show that the movement was controlled by hand cranks operated by a single pilot.

Bushnell was a reportedly frail individual for whom operating the hand cranks proved very difficult. In addition, the mechanism with which the explosive would be deployed was not strong enough to break through the metal hulls of the British warships.

In 1777 the experimental craft was again unsuccessful in sabotaging the target, the British Eagle, a prestigious ship that would have been a boon to sink with such a small (and high-tech) craft. The pilot was Sergeant Ezra Lee, chosen as a last minute replacement for Bushnell who had to back out of the mission owing to his health.

In the New York Harbor, Lee was able only to deploy the bomb into the harbor, not into the Eagle. Slowly making his way at the speed of less than a mile an hour, Lee managed to return to Manhattan without being sunk by the British Royal Navy. The bomb exploded in the harbor an hour later.

What Became of The Turtle?

Despite not being a total success, the documents surrounding the building and use of the Turtle were kept confidential. The little 7-foot submarine was sunk in an attack by the British one month after the Eagle mission when Bushnell was transporting it aboard a sailboat. Though the Turtle was recovered it was never again used in combat and its whereabouts remain unknown. 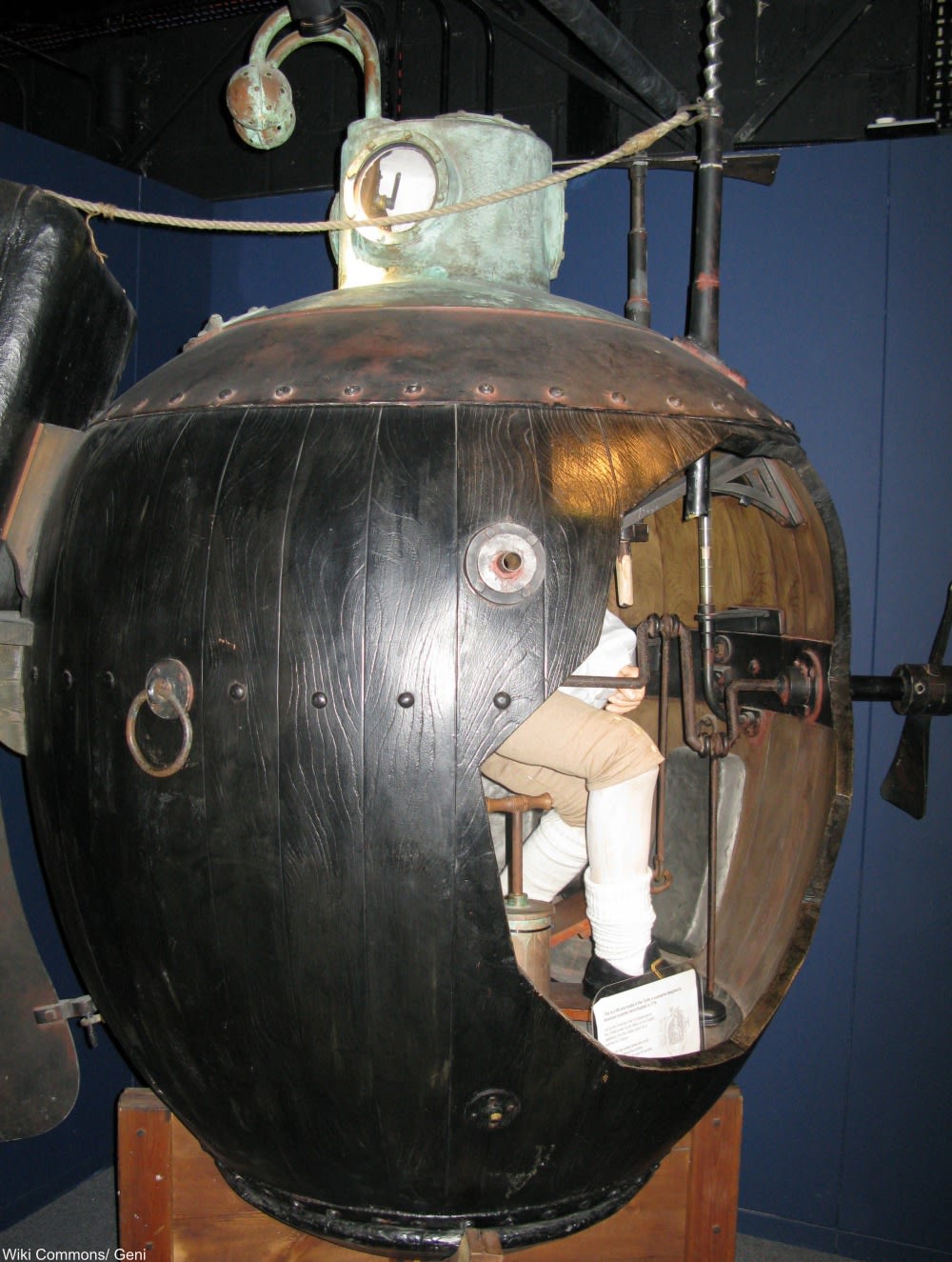 Today we have replicas made from plans of the vessel that give us an idea of what it really looked like. The photo above was taken at the Royal Navy Submarine Museum in Gosport, England. In 2005 another replica was unveiled at the Massachusetts College of Art and Design in Boston. And, there exist several other replicas in Bushnell’s home state of Connecticut.

The Revolutionary War finally was won only in 1785 and submarines played no part in the victory. But, this innovative little war machine opened the gates to the burgeoning field of military submarines.

Click “Next Page” for a look at which books the founding fathers read!