Inside the Fashion of the 1939 World’s Fair

It’s not everyday that we get a look at a vintage fashion show. Even more special is the famed 1939-40 World’s Fair in New York. This was before the U.S. entered World War II and this fair was full of diversions of every type from food to science to the newly-invented TV to women’s fashion. While fashion shows aren’t usually a part of fairs these days, the World’s Fair was a different breed of festival. The huge fairgrounds a World’s Fair catered to every taste with both homegrown and exotic attractions around every corner. And the fashion was no less exciting! 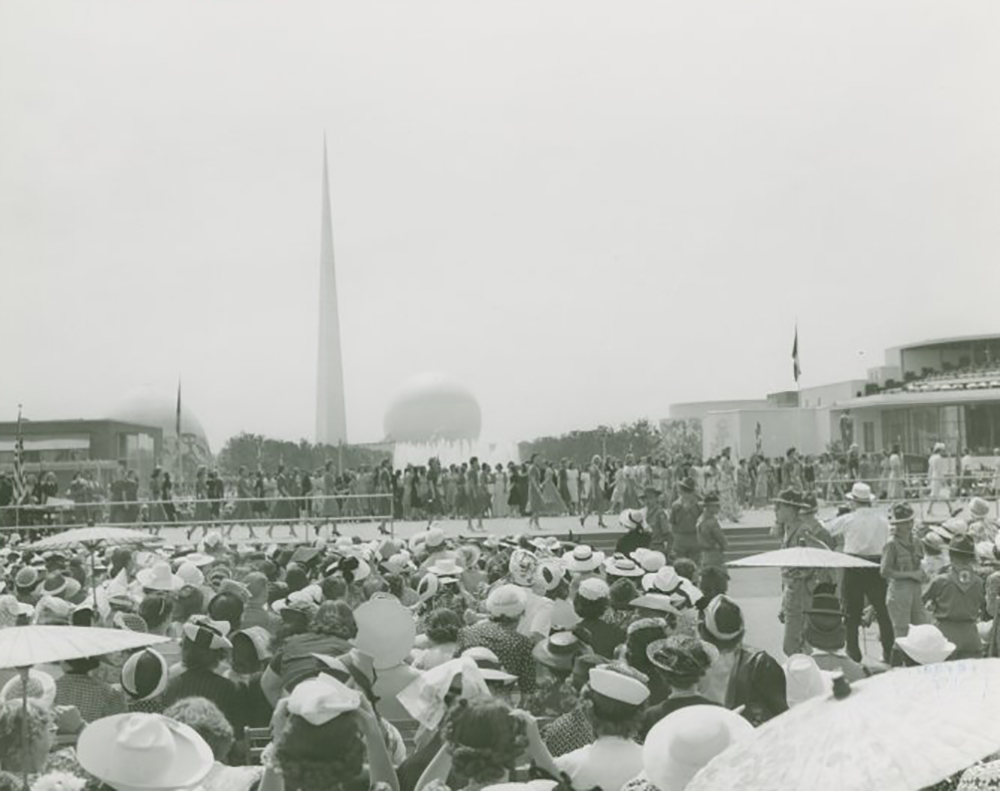 The caption on the back of the above press photo reads: “One of the most interesting parts of the important ‘World of Fashion’ exhibit at the World’s Fair of 1940 in New York is the amusing Accessory Arcade. The presentation of the important little things that make or mar costumes will be displayed in cleverly illuminated shadow boxes, the exhibit technique bow used in New York’s famous Aquarium and some of its most up-to-date museums. Here bags, belts, jewelry, gloves, handkerchiefs, and scarfs [sic] will be displayed with all the distinction of rare gems in a Fifth Avenue jewelry shop.” 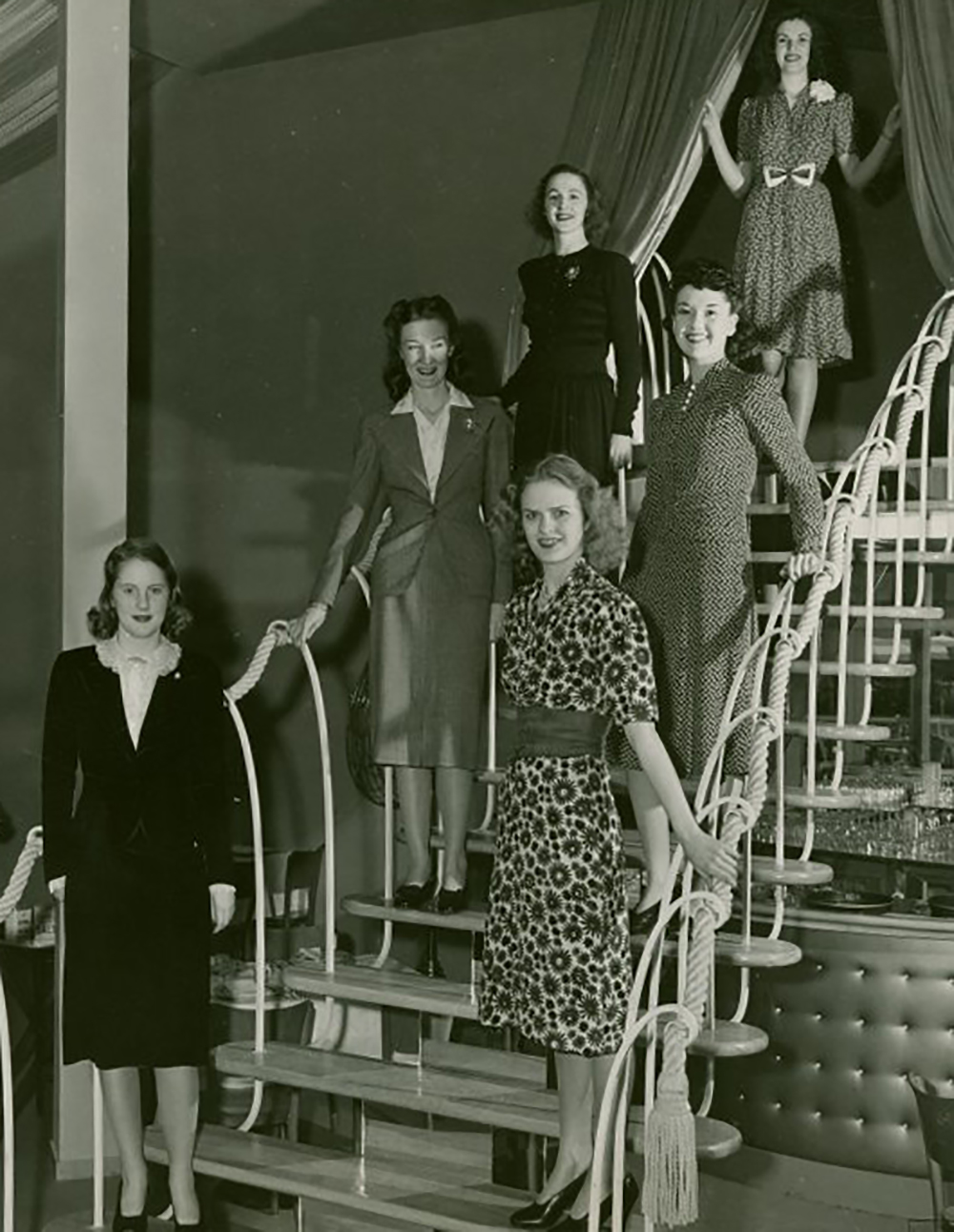 The fashion exhibit also had a restaurant, as the caption describes: “On the mirrored stairway in the new ‘World of Fashion’ Restaurant are the models who will appear in the daily fashion show and modeling the gowns of the members of the Uptown Guild.” 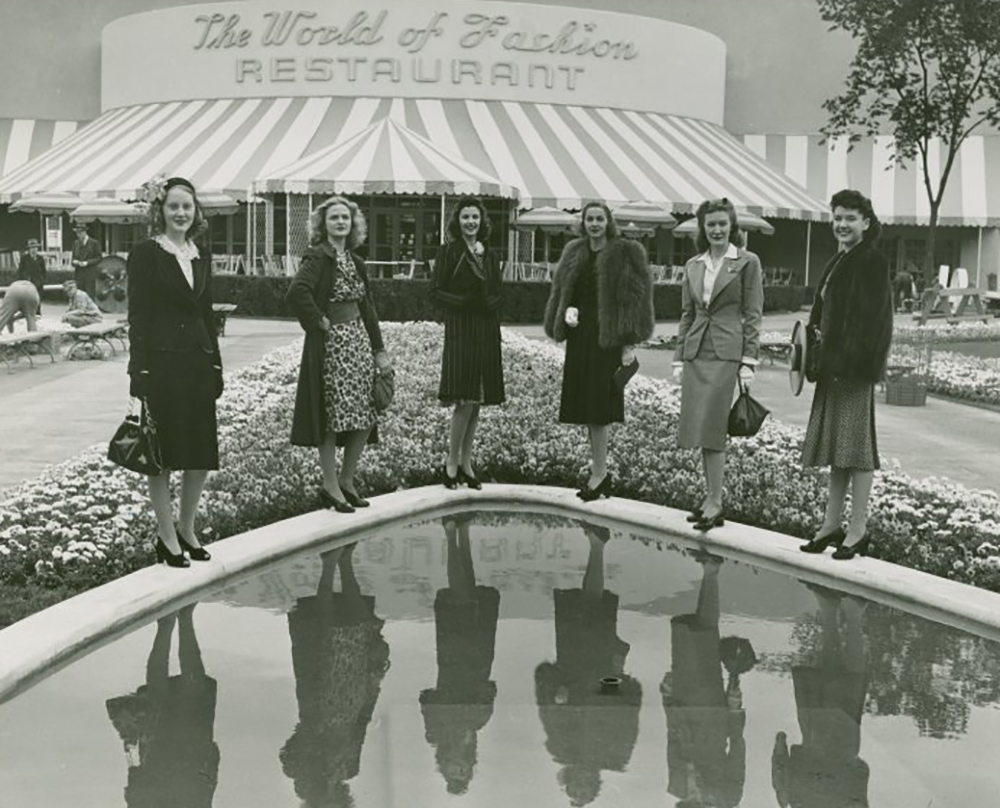 The aforementioned restaurant, with models posing in front of it in true World’s Fair style. 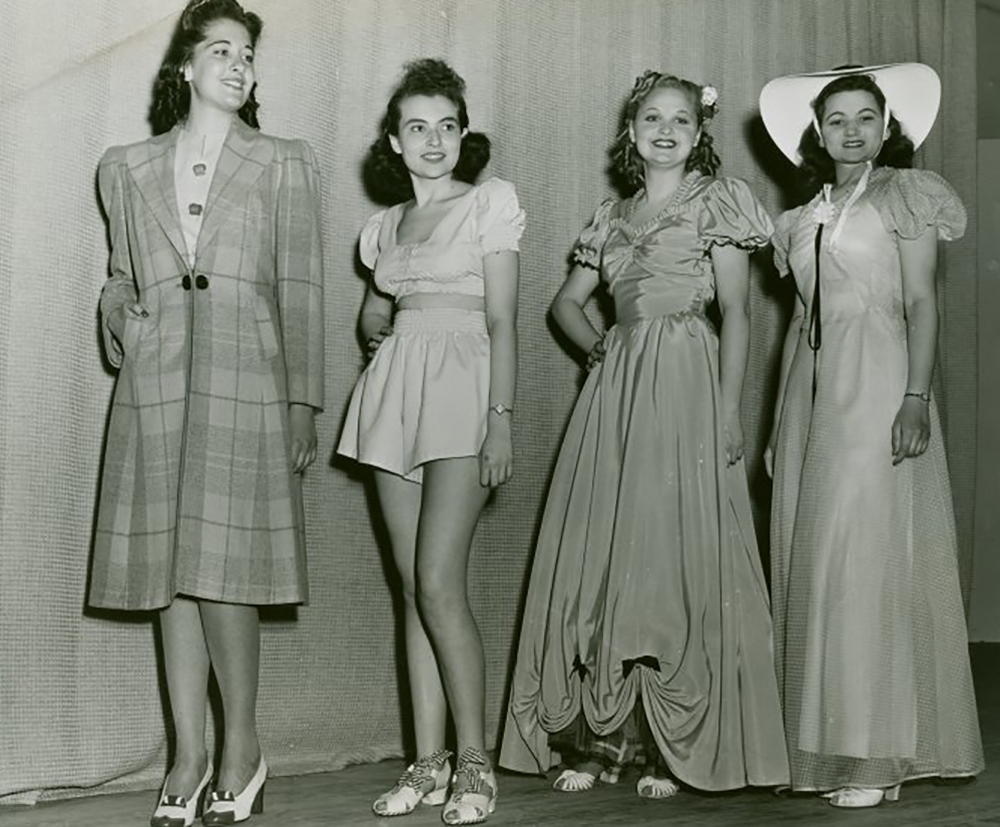 There was even a fashion show for teenagers, seen above, which used teenage models from Brooklyn’s Eastern District High School. 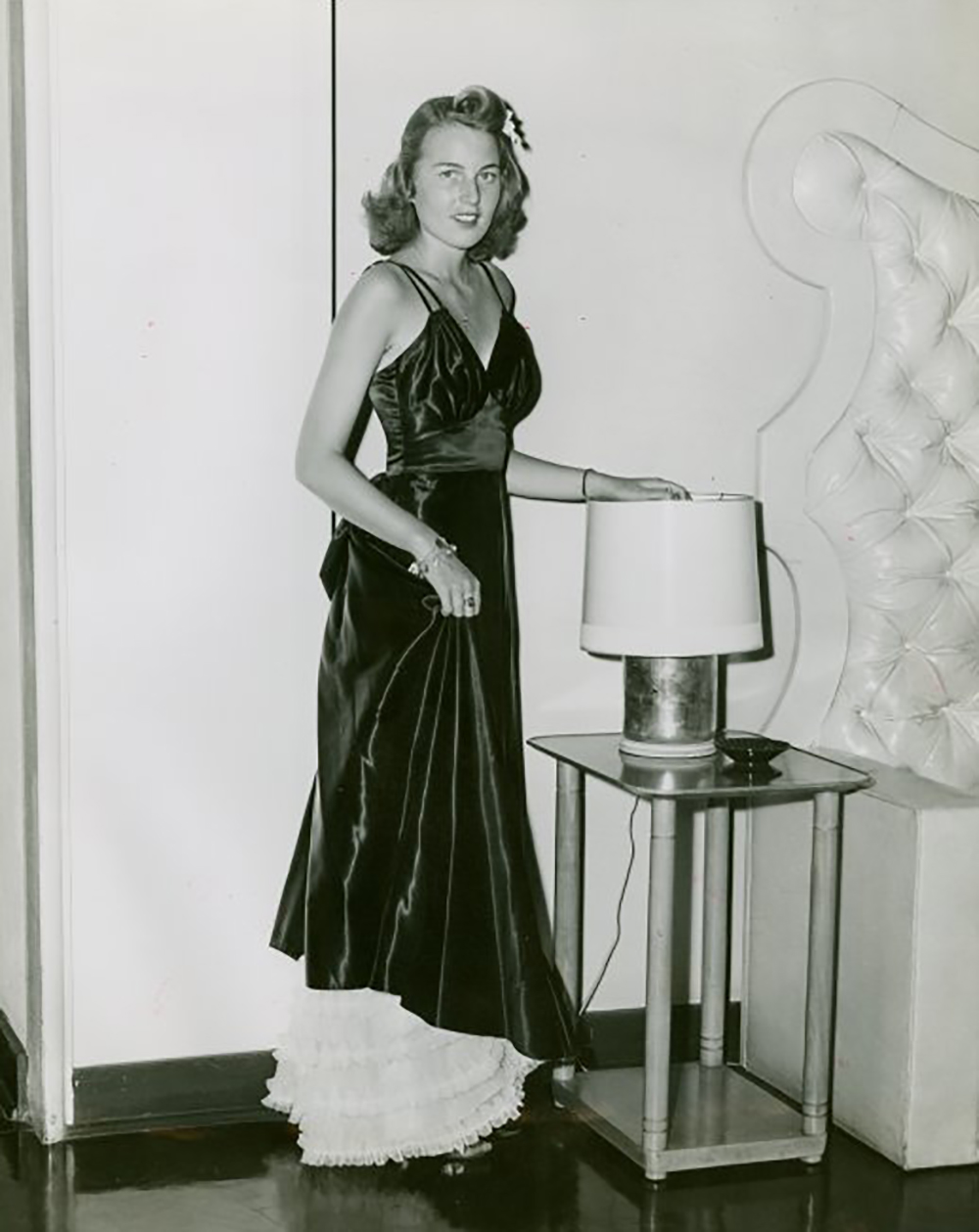 “For heavy dates Mademoiselle Magazine, which staged a college fashion show recently at the National Advisory Club at the New York World’s Fair, suggests black satin with the skirt raised in the back over a white net ruched petticoat. There is, of course, a bustle.”

The fair was held in New York City (not to be confused with the 1939 International Expo held in San Francisco). The theme of what is often called the New York World’s Fair was “the world of tomorrow” which took an inventive view of how we would live, farm, work, and entertain in the future. 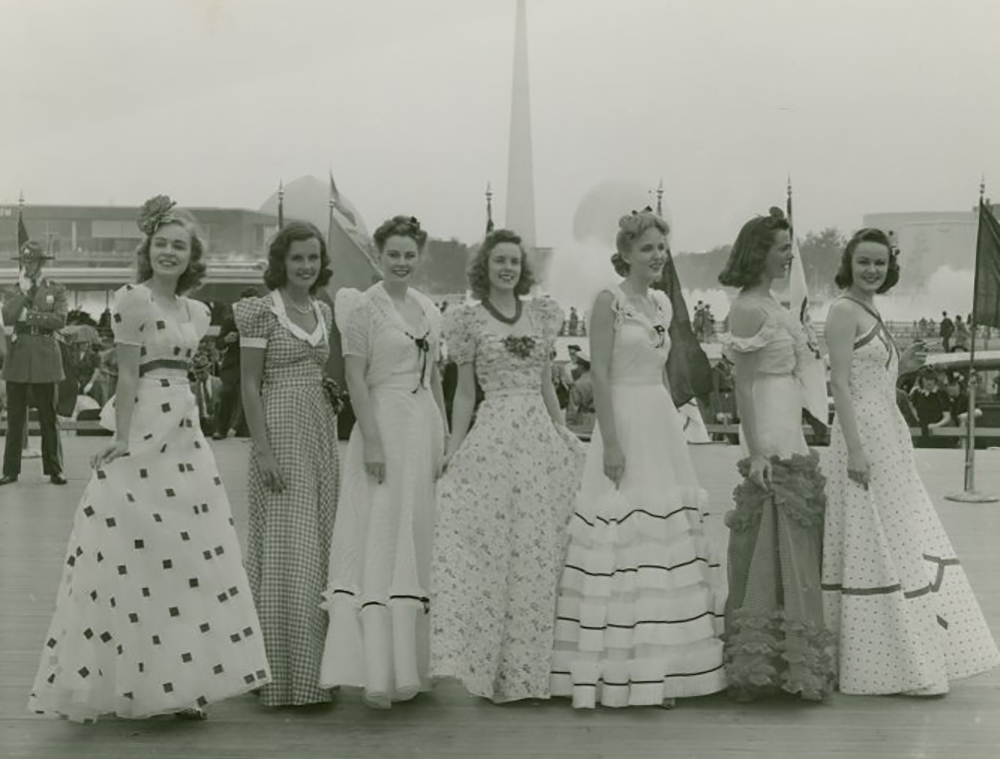 The fashion, while incredibly beautiful, was somewhat less futuristic than the other parts of the fair. Indeed, some of the biggest advances in fashion would only come about because of World War II. However, the dresses are certainly beautiful, if not high tech. 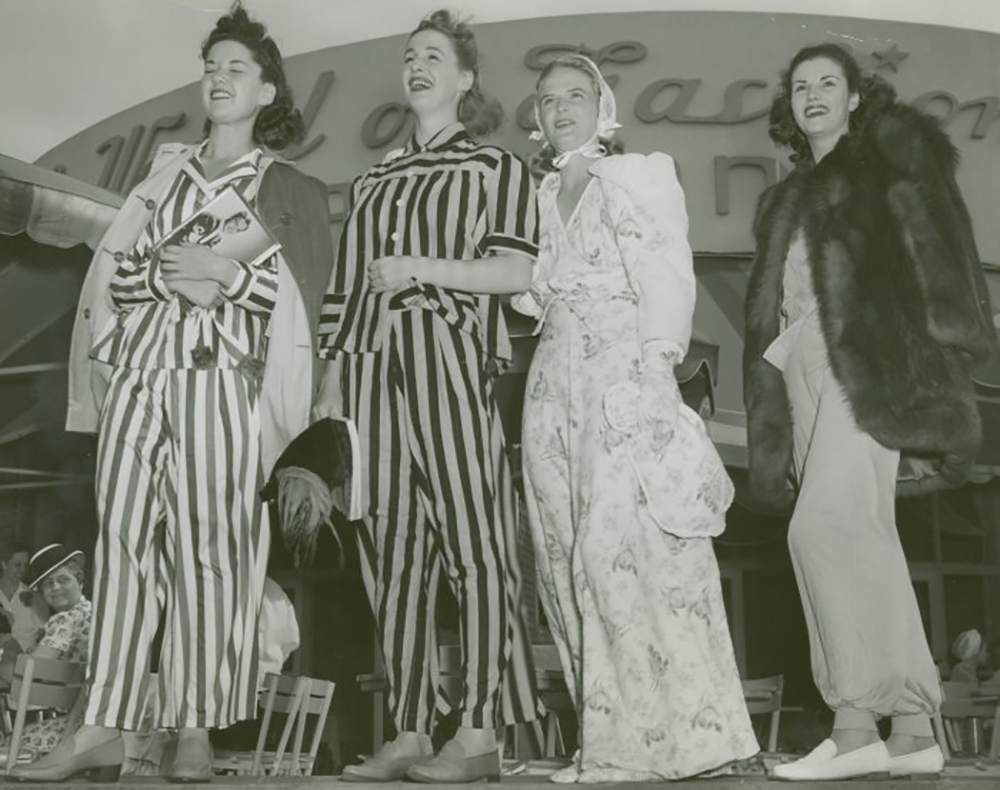 There was also a fashion show dedicated to pajamas! 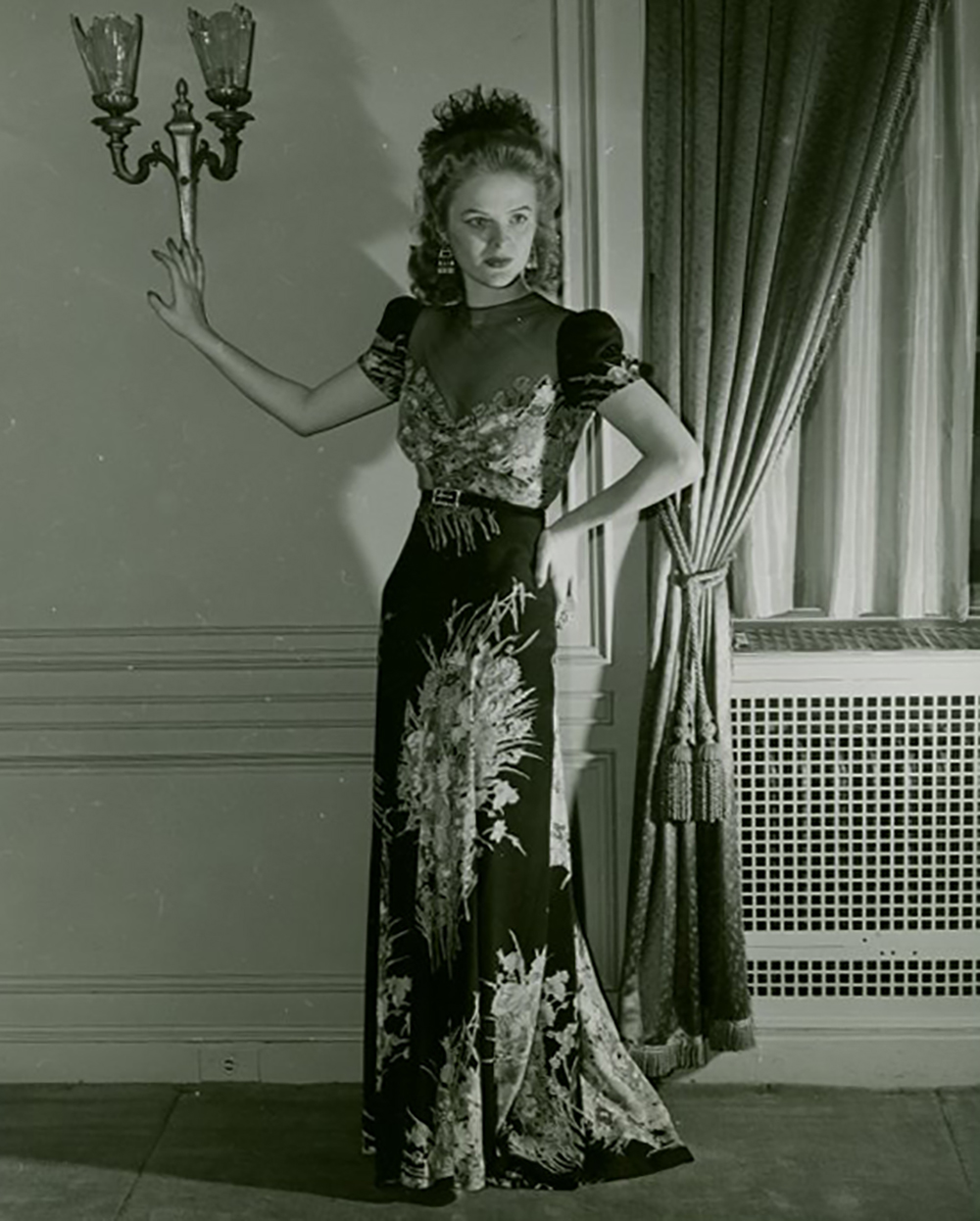 The fashions ranged from the everyday to the extraordinarily extravagant, as in the black crepe dinner gown with sheer silk knot décolletage seen above (worn with matching pompadour horsehair hat). 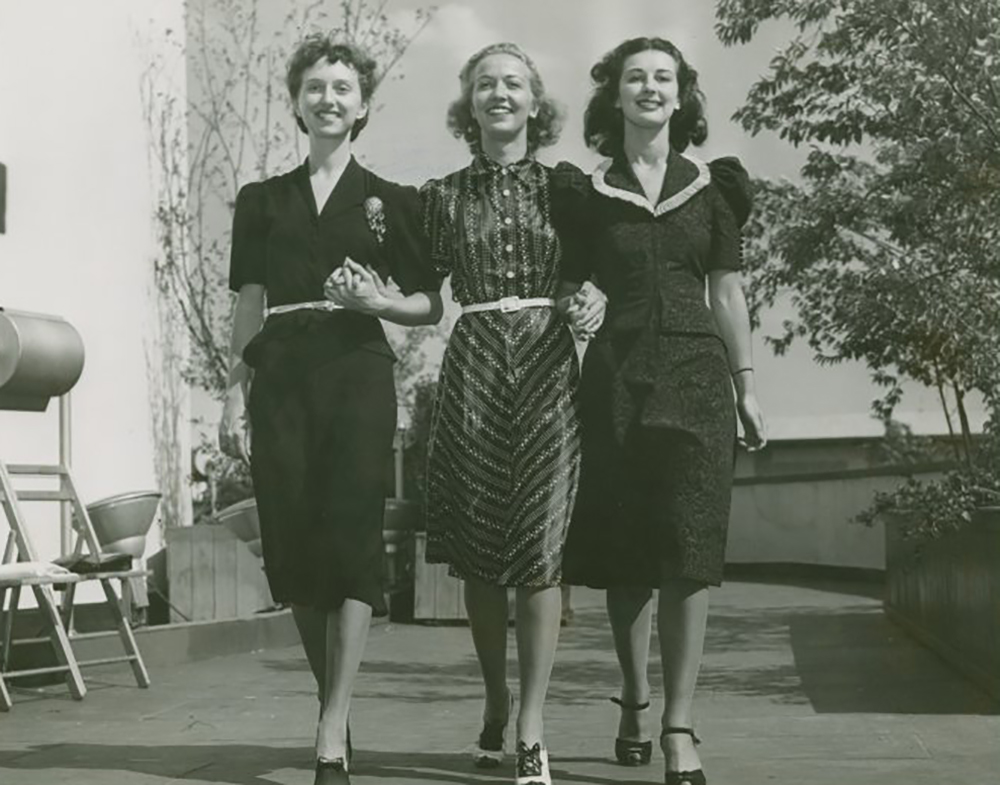 There was even a giveaway at the “Take Away a Dress Fashion Show” (above) which featured dresses from Bloomingdales, Popular Price Dresses, and Hearn’s. 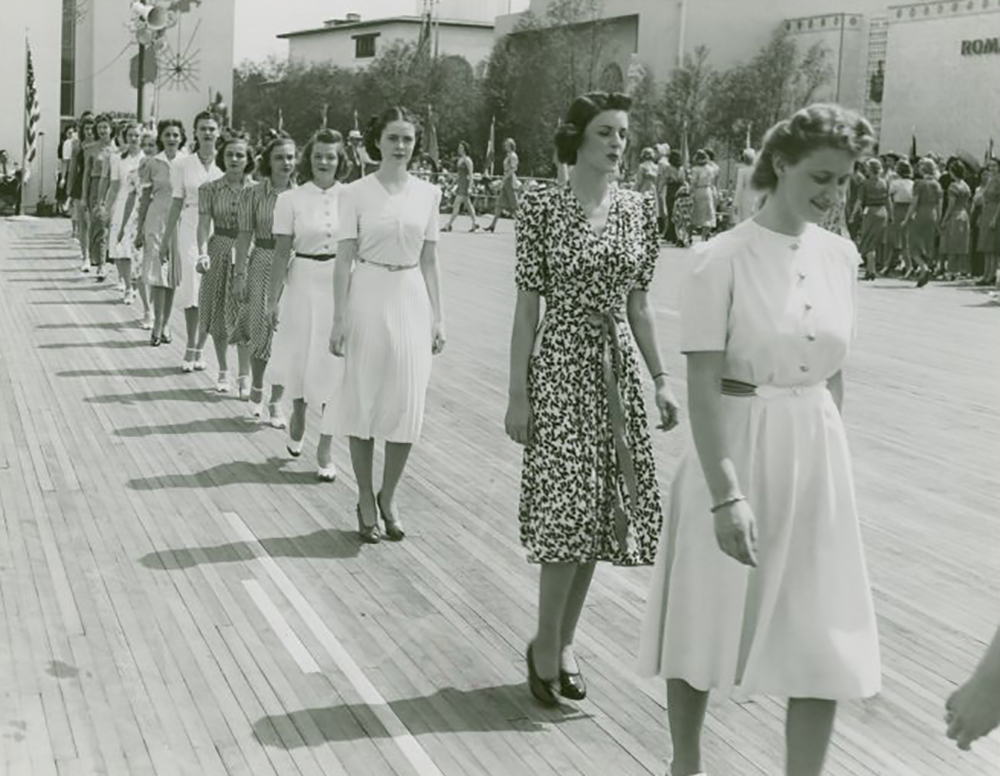 But, it wasn’t just dresses that they were giving away: “Models in the ‘Take Away a Dress Fashion Show’ at the New York World’s Fair parade across the stage at the Court of Peace as 10,000 eager women spectators waited to hear their numbers drawn to win one of the 400 dress, bathing suits, beach robes, and sports clothes given away.”

If you’d rather see what regular folks were wearing at the New York World’s Fair then watch the video below for some color film of the event.