8 Intriguing Time Capsules Still Waiting To Be Dug Up

Unless you’re new to the site, you probably know that we have a deep fascination for time capsules. Can you blame us? There’s something so exciting about digging up all that history. Whenever a time capsule is unearthed, it’s like opening up a portal to a different world. The contents of some of our favorite discovered time capsules vary; we’ve seen 220-year-old artifacts buried by our nation’s founding fathers, a 70-year-old time capsule buried by the students and faculty at MIT, and even a personal treasure from WWII left for a son by his father. No matter what’s inside, the anticipation of finding a buried (and sometimes forgotten) time capsule and the thrill of discovering what it contains is undeniable.

The International Time Capsule Society estimates that there are between 10,000 and 15,000 time capsules still buried across the world. We did a little research, and here are some of our favorites: 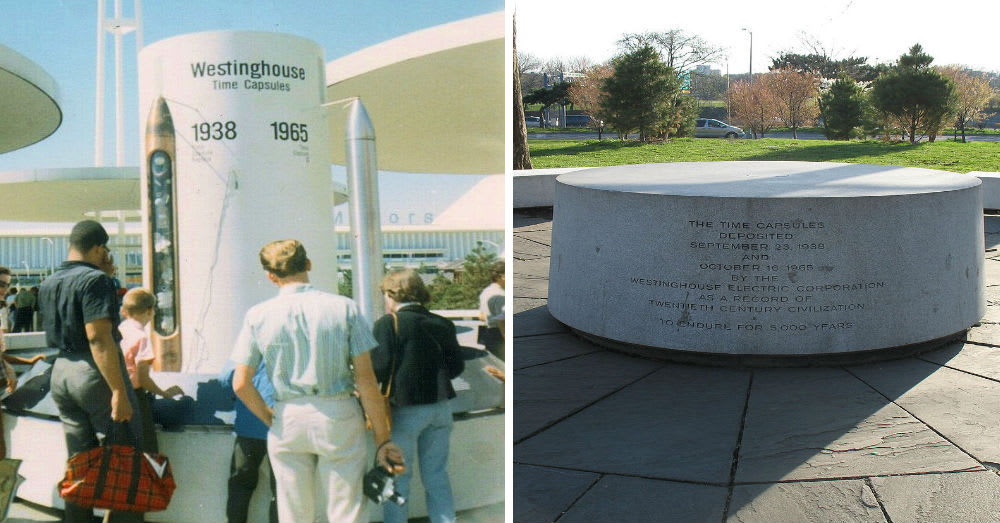 We’ll start off with a two-for-one. Sealed in 1938, the first Westinghouse time capsule was made to commemorate the 1939 New York World’s Fair. It’s supposed to be opened in 6939, and contains microfilm holding more than ten million words and a thousand pictures, as well as copies of Life magazine, a Kewpie doll, a dollar in change, a pack of Camel cigarettes, a Lilly Daché hat, a Sears Roebuck catalog, and a dictionary, amongst other items.

The second time capsule, buried in 1965 to commemorate the 1964 New York World’s Fair, is also set to be opened in 6939. Its contents include an electronic watch, and electronic toothbrush, images of a guest book signed by visitors to the Westinghouse Pavillion during the 1964 fair, and an American flag. Both of the time capsules are located beneath Flushing Meadows-Corona Park in New York City.

Designed to keep the artifacts that best represented America at the time (2000) in tact for 100 years, the National Millennium Time Capsule contains some truly historic items. The contents include a helmet from WWII, The Bill of Rights, Photos of Earth from Space, A CD-ROM of the Human Genome Project, a piece of the Berlin Wall, and a film reel showing Neil Armstrong’s moon landing. Of course, there are some significant pop culture items included as well, such as Ray Charles’ sunglasses, a recording of Louis Armstrong’s trumpet, broadcasts of the Metropolitan Opera, and a copy of The Grapes of Wrath. And to top it all off? A Twinkie (although the Twinkie was subsequently removed for the fear that it would attract mice). This capsule is set to be open in 2100.

If a time capsule is big enough to fit a car, then it definitely will catch our interests. Sealed in 1975 and set to be opened on July 4th, 2025, the Seward, Nebraska Time Capsule boasts the illustrious title of “World’s Largest Time Capsule.” The story goes that Harold Keith Davisson was thinking about his grandchildren when he had a 45-ton vault buried beneath a mound of dirt in 1975. He wanted his grandchildren to know what his life was like, so he buried an eccentric assortment of more than 5,000 items. Notable contents include a brand-new Chevy Vega, a brand-new Kawasaki motorcycle, and an aquamarine leisure suit. The monuments built above the time capsule are still a popular roadside attraction. 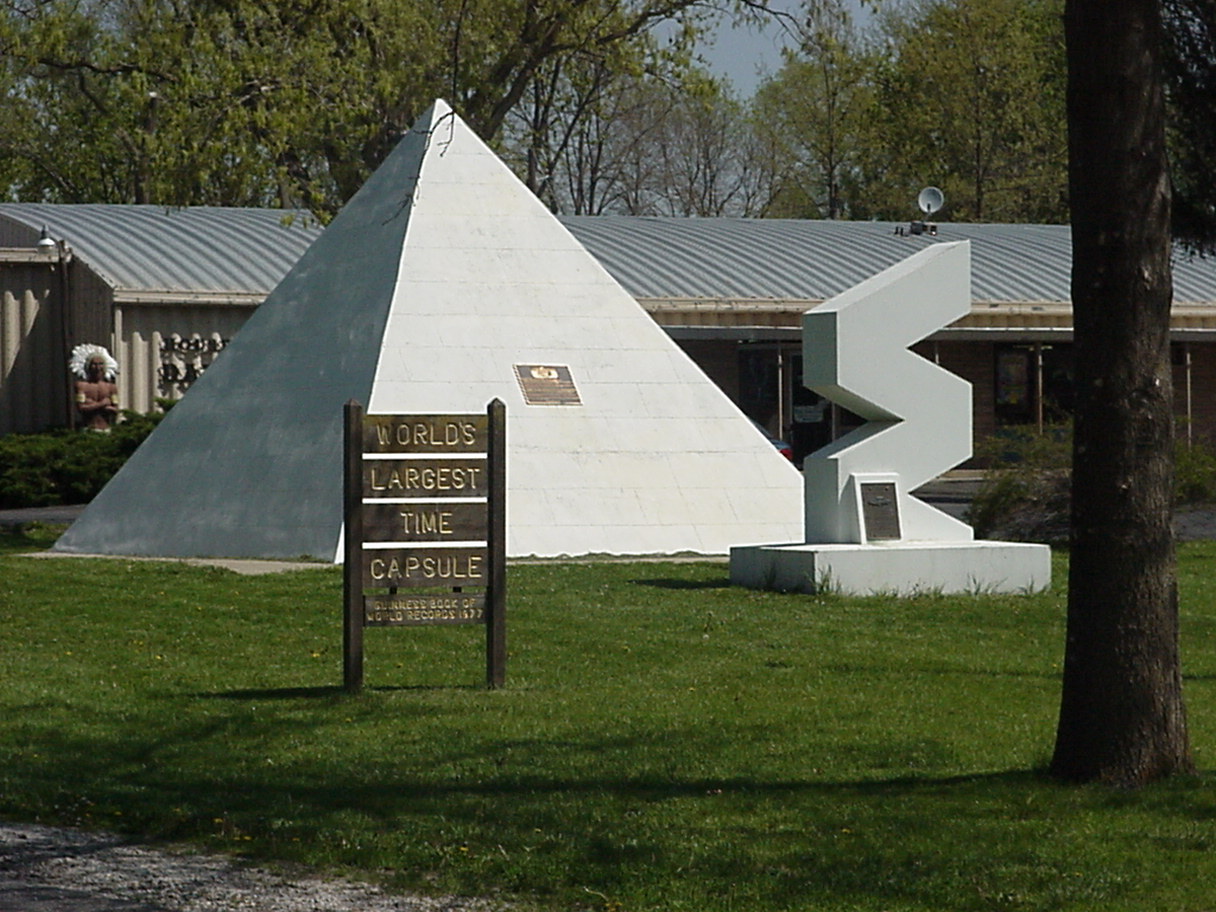 If there’s one time capsule on this list that would most likely reflect our lives, it has got to be the Los Angeles Bicentennial Time Capsule. Buried in (you guessed it) 1976 in commemoration of the Bicentennial, this capsule itself it quite significant; it’s a propellant tank designed for the Mariner 9 mission to Mars. It contains some pretty cool memorabilia too, including a dress worn by Cher and Jerry West’s basketball jersey. Of course, no time capsule from the ’70s would be complete without a skateboard and a pet rock! This one’s set to be opened in 2076.

Allow us to indulge our childhood obsession for this spot on the list. Buried somewhere at Skywalker Ranch is a time capsule George Lucas created that’s just teeming with Star Wars goodies. The capsule itself was only buried in 1997, and has no set date to be opened (Lucas has stated he wants it to be discovered by archaeologists in 2,000 years). While he doesn’t even know for sure what exactly is included in the capsule, he did say that it contains a lot of artifacts from the movies and from the company. We can only hope that means there’s a lightsaber in it. 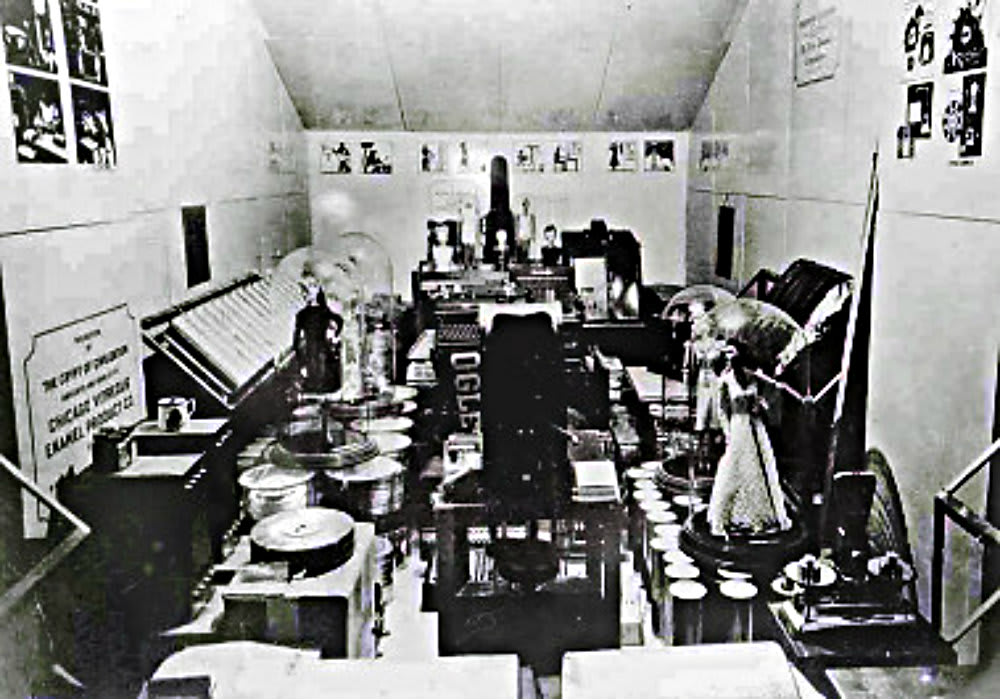 Sealed in 1940 and set to be opened in the year 8113, the Crypt of Civilization time capsule is more than just a spooky name. Built by and buried at Oglethorpe University in Brookhaven, Georgia, the capsule is actually an airtight 2,000-cubic-foot chamber. It was cited as the”first successful attempt to bury a record of this culture for any future inhabitants or visitors to the planet Earth,” according to the Guinness Book of World Records, and was the largest time capsule until Harold Keith Davisson built his in 1975. The room contains several significant artifacts, including an original movie script of Gone With The Wind, airtight receptacles containing microfilm of more than 800 classic works of literature, and voice recordings of historical figures such as Franklin D. Roosevelt. Other objects include seeds, a typewriter, a sewing machine, and other high-tech gadgets from that time period.

This 450-pound time capsule was buried in 1940, and is schedule to be open in 2040. The thing about this particular project that caught our eyes was the mystery surrounding it. While we know that the capsule includes a speech that President Franklin D. Roosevelt made at the university, that’s about it. The rest of the contents are unknown and, given the fact that the capsule weighs 450 pounds, you’ve got to think there is something significant inside. 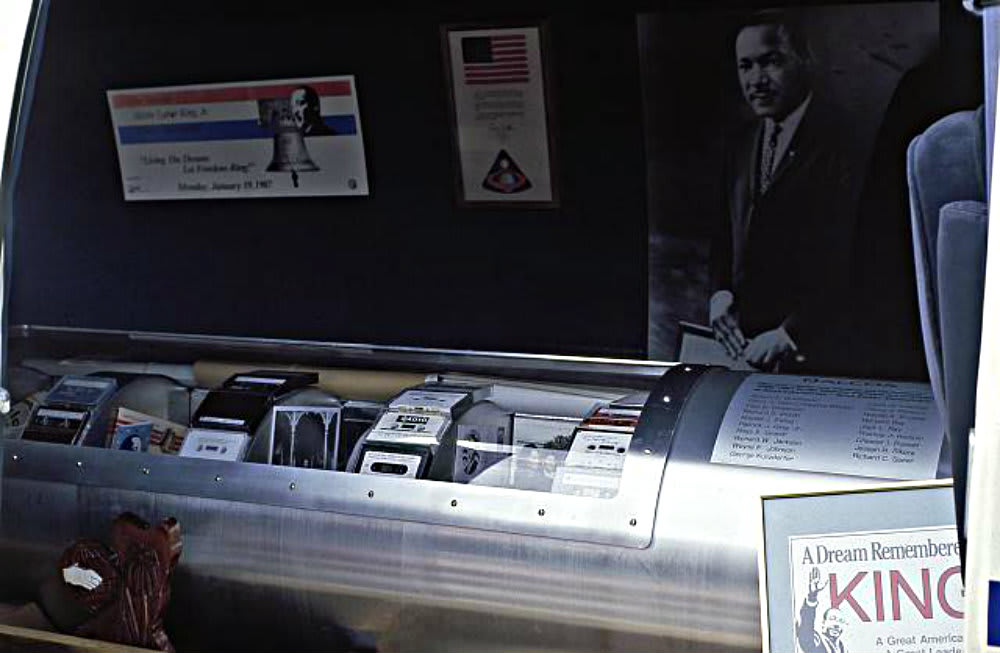 In 1988, Western Plaza in Washington D.C. became Freedom Plaza in honor of Martin Luther King, Jr.s’ “I Have A Dream” speech. To commemorate the moment, a time capsule containing some of King’s personal belongings was buried in the ground beneath. Some of the contents of the capsule include King’s bible, a robe he wore to preach in, and audio recordings of some of his speeches. The time capsule is set to be opened in 2088, and there’s no denying the historical significance of it, nor the man it represents.

Time capsules aren’t the only ways to get your history fix! There are gorgeous libraries all around the world just waiting to be explored! Click the NEXT PAGE button to see a few of our favorites.