You Won’t Believe The Crazy History of Monopoly

As one of the most popular games of the 20th century, Monopoly holds a special place in those precious childhood memories. From the thrill of buying property to the dread of landing in jail, this is one board game that has captivated children and adults for decades. Monopoly enthralled Depression-era audiences to became the legendary game we know today, but the history of this all-American past time will surprise you! 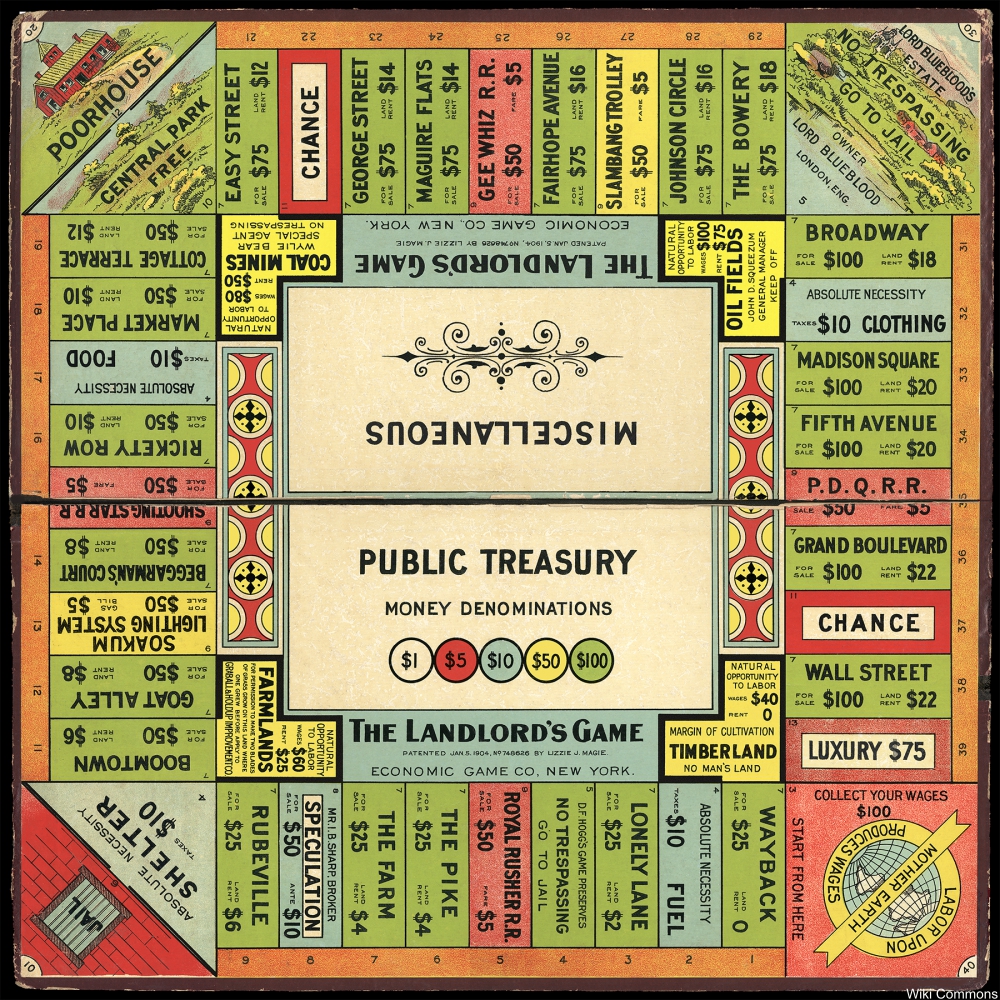 Used as a way to smuggle maps and information into P.O.W. camps during World War II, Monopoly developed an even stronger market share after the war was over. But, the classic game we’ve all grown up with has quite an origin story. Originally created by Elizabeth “Lizzie” Phillips (née Magie) in 1904, The Landlord’s Game as she called it, was actually intended to show how the system of property holdings worked to the disadvantage of small business and the working class. Phillips wanted to further the cause of social justice by demonstrating to the public the crooked ways of landlords. Phillips’ ideas were heavily influenced by the work of Henry George, an economist whose idea of the “single tax” caused quite a stir in the 19th century.

George believed that the ills of the economy would be remedied by instating a tax on land value, instead of taxing what was built on the land. George assumed it would encourage development on said properties as well, creating jobs and reducing the cost to maintain large structures like skyscrapers. George’s 1879 book Progress and Poverty outlined these tenets and by the turn of the century, he had many followers. Unfortunately, the few times that municipalities attempted a Georgian tax structure the results were not altogether positive. 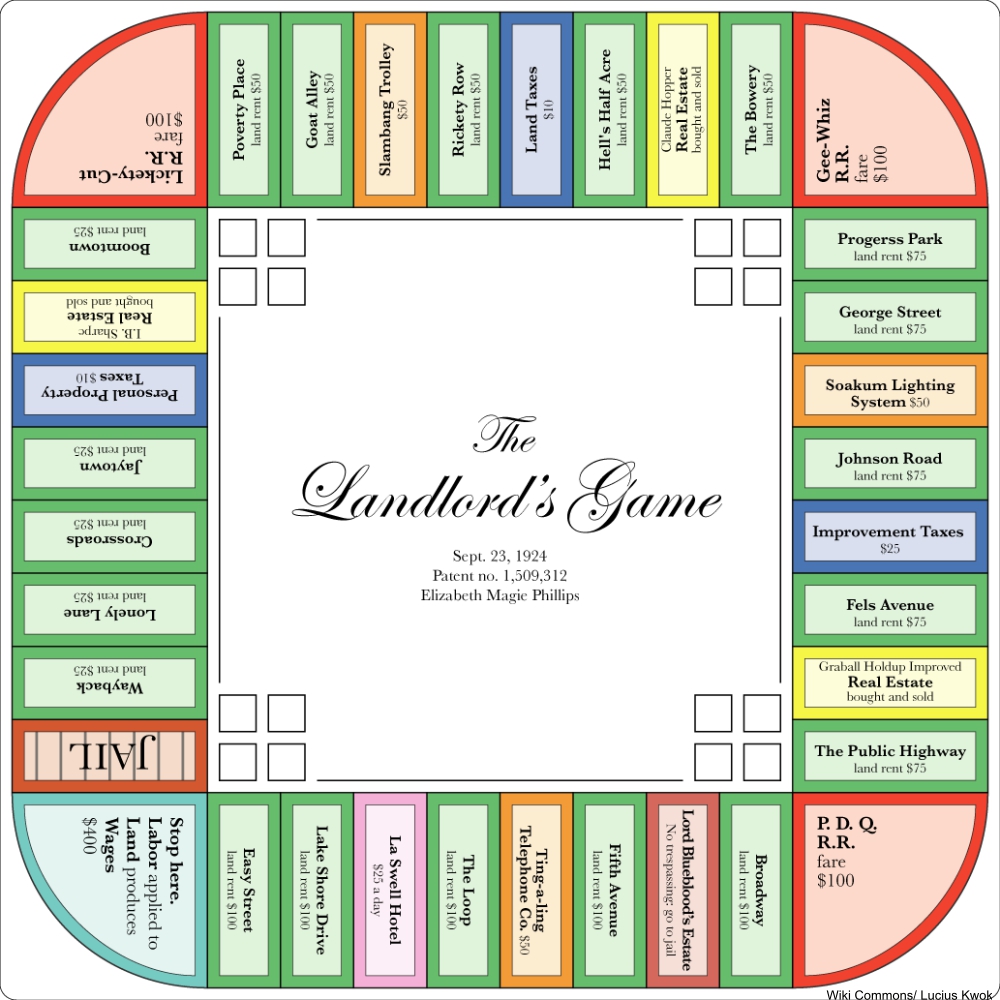 Recreation of the game based on the 1924 patent information. Via/ Wiki Commons

Back to the game that Phillips created- it was patented and self-published 1906 and in 1924 a new edition was patented. The game caught on with college students at Princeton and Haverford among other colleges by the late 1920s, who frequently altered the game to suit a more commercial mindset. The aim of the game transformed into ruining one’s competitors. It was another woman, Ruth Hoskins, who added the Atlantic City names that we have come to associate so heavily with the game. The game was published in the U.K. by the Newbie Game Company under the name of Brer Fox an’ Brer Rabbit, with the two characters playing major roles in the game play.

One of the players who had been enjoying an altered version of the game was Charles Todd, who taught the game to one Charles Darrow around 1932. Darrow commonly been credited with creating Monopoly during the Depression, but the truth is that he took Todd’s recounting of the game and ran with it. As far as we can tell, Darrow made very few changes to the dictated version of the game, which even retained the misspelled “Marvin Gardens” from Todd! Coincidentally, Marvin Gardens is the only place name in the game that isn’t an official place, but is the informal name of an area between Margate City and Ventnor City in New Jersey.

Darrow patented Monopoly in 1932 and began to sell small production copies. Parker Brothers purchased the rights to The Landlord’s Game from Phillips in 1932 for $500 and a new edition of the game allowed for alternate set of rules. Phillips never received royalties from Parker Brotherss and her game was even sold alongside Monopoly for a time. In 1934 Parker Brotherss bought the rights the Darrow’s game for a whopping $7,000 and agreed to pay him royalties. The story goes that Darrow was struggling to feed his family during the Depression and would have done anything to make money. Still, it doesn’t seem right that he would have gotten so much more from his stolen version of the game than the original creator got for her version! 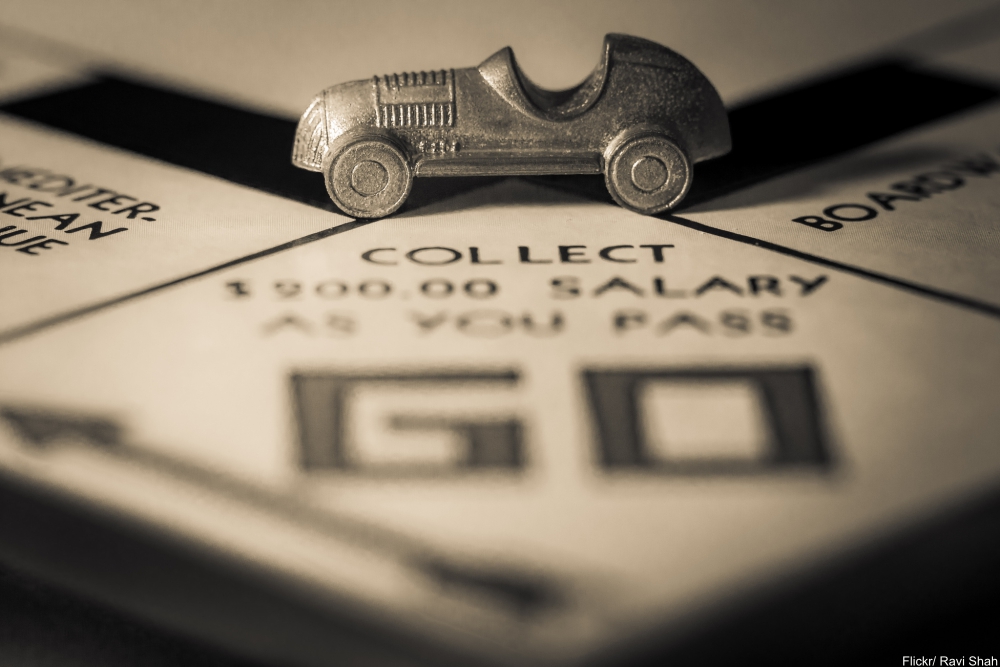 An incarnation of the game appeared in the ’70s called Anti-Monopoly, created by Ralph Anspach, which parker Brothers sued over. During the trial the origins of Monopoly were revealed and amazingly the game is still available today.

This American classic has entertained generations of kids and adults, most of us never knowing how this ruthless game came about. We have the inventive Lizzie Phillips, the early players of the game who changed the rules, Charles Todd, and even Charles Darrow to thank for bringing Monopoly into our homes over the course of 40 tumultuous years.

Read about the fascinating history of the two dollar bill right here!