Did Couples Really Sleep in Separate Beds in the Old Days?

When we see classic TV shows like I Love Lucy and The Dick Van Dyke Show, the main characters, despite being married, never sleep in the same bed. It’s easy to see why many people have theorized that real people didn’t actually sleep in separate beds. There’s no doubt that cautious modesty played a huge role in what was shown on television at the time. Pregnancy, sex, and breastfeeding were not discussed on TV at all back then. So it begs the question: did regular people sleep in separate beds in great numbers? 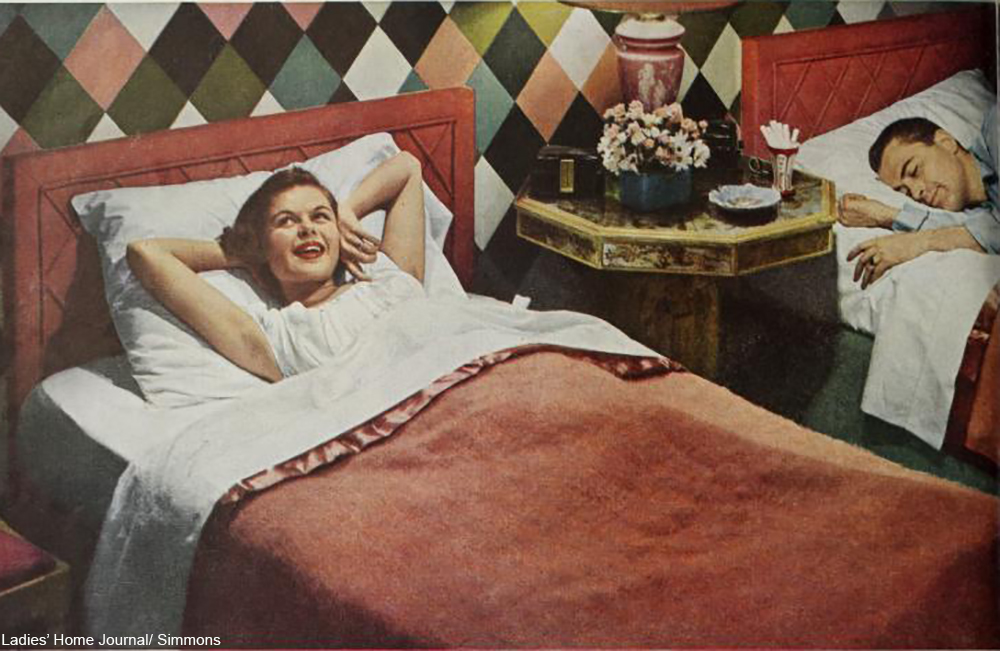 Advertisements for beds and bedding that predate early TV programs do show separate beds for what we assume are married couples. The ad below from 1920 certainly steers the reader into the notion that separate beds offer better sleep. But, is that an objective concept truly based on health and common wisdom of the era? Or was it a ploy to sell more beds and bed frames? The ad promotes the “fine principle of a separate bed for everyone.” Of course, they would say that. 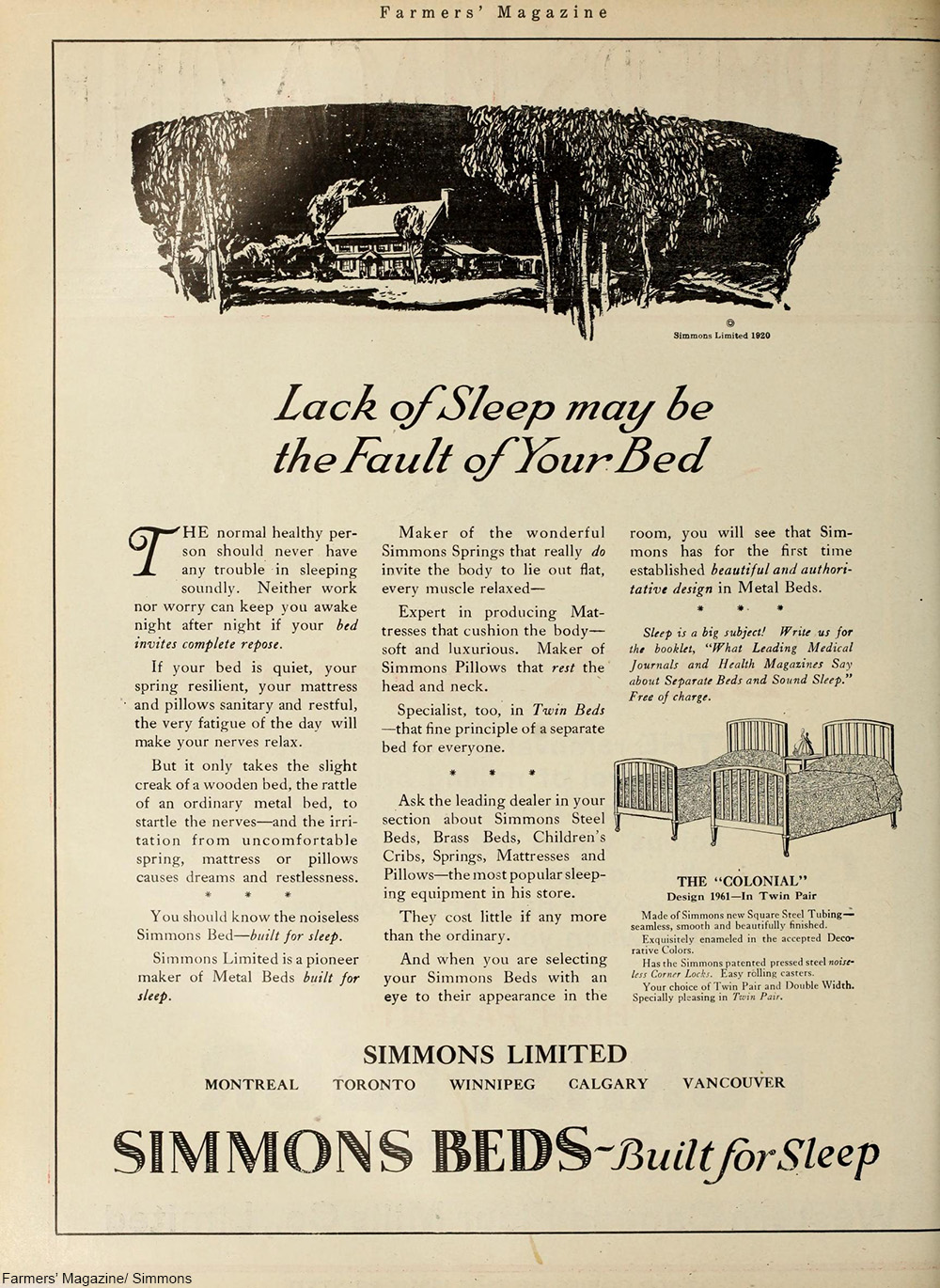 Throughout history, the notion of communal sleeping was common around the world. Even in Europe, travelers would often share beds at inns with complete strangers. Whole families slept together in rooms that were used for many things, like living rooms by day with straw mats or beds that pulled out for night time sleeping.

The concept of separate beds for the wealthy was no problem. Members of royalty and the wealthy often had their own separate quarters, but that’s because they could afford to with their big houses. Likewise, beds and bedding were expensive even if you did have enough rooms for separate sleeping places. It was a mark of status in the middle ages to have the laundress come and wash all the bedding once per year because it showed just how many sets of bedding one family could own, thereby displaying their wealth. They couldn’t have afforded hiring a professional unless the family owned many, many sets of bedding to justify the expense.

For the rest of the world, the notion of separate beds was simply unattainable and wasn’t even seen as desireable until the Victorian era. In 1851 in England a law was passed that made it illegal to force strangers to sleep in the same bed in boarding houses. Co-sleeping had been identified as a potential for disease transmission as early as the 1700s and the Victorian era fears of immorality also made the practice seem unappealing. 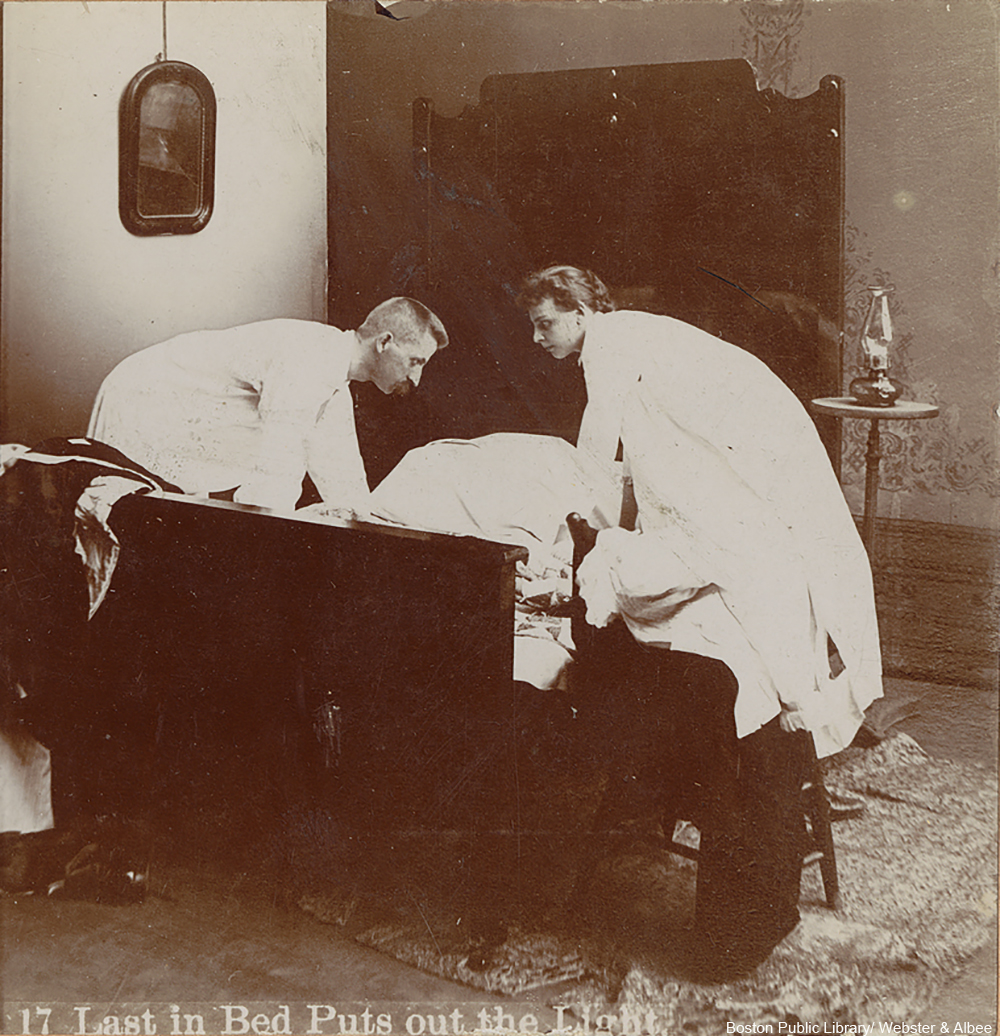 Health officials in Europe and the colonies made a concerted effort to deter the public from communal sleeping, even going so far as to imply that married couples should sleep in separate beds. The 20th century brought a slew of new innovations, like reliable manufacturing of beds and bedding, as well as the suburban home. 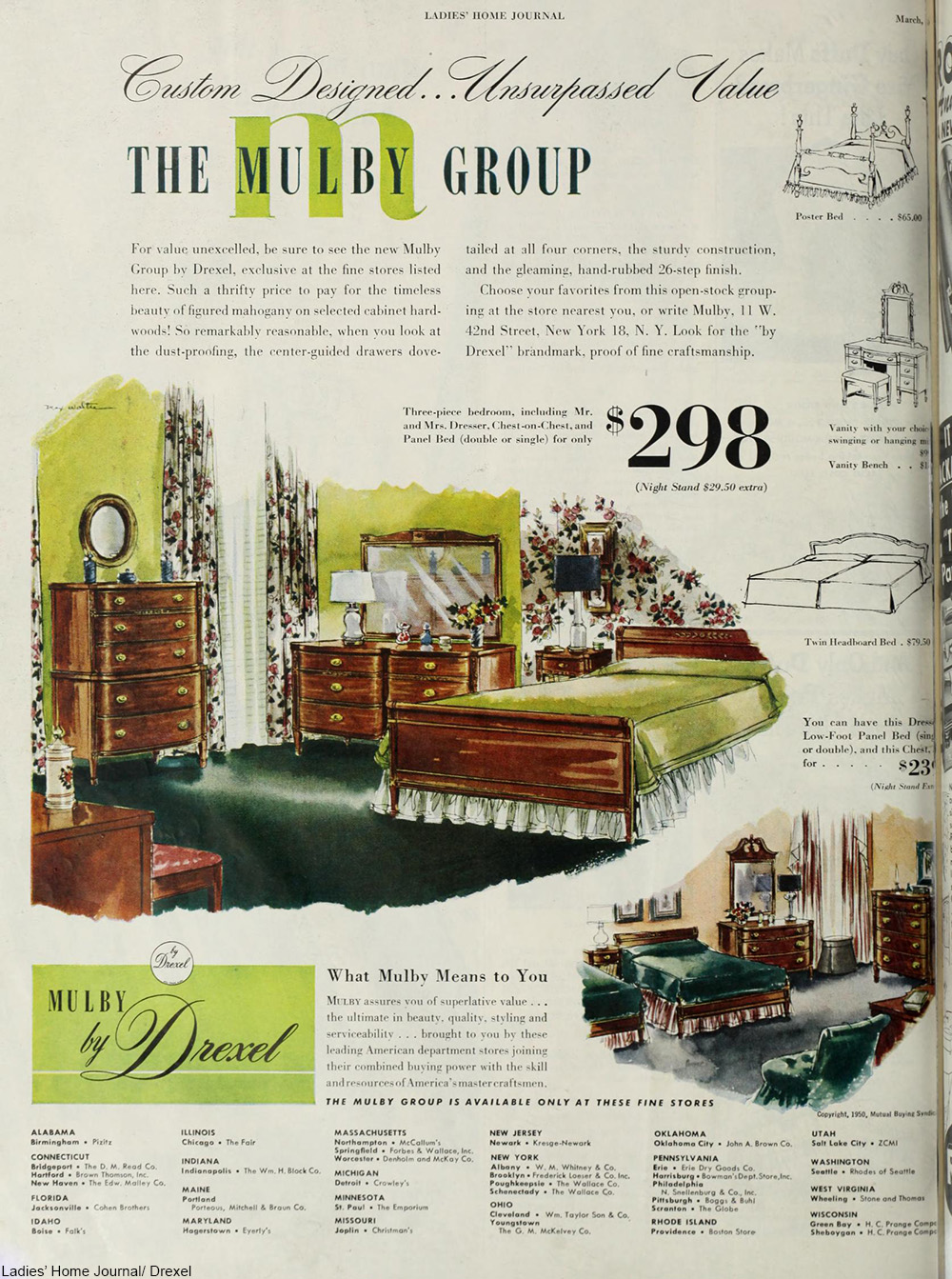 This Drexel ad from 1950 shows a variety of sleeping arrangements: one double bed, two double beds, and twin beds with a double headboard. Via/ Internet Archive

Following World War II in particular, the increase in the size of homes in the U.S. with the new housing was a marked improvement from the small and unhygienic housing stock that was found in both urban and rural areas of the U.S. during the Great Depression. 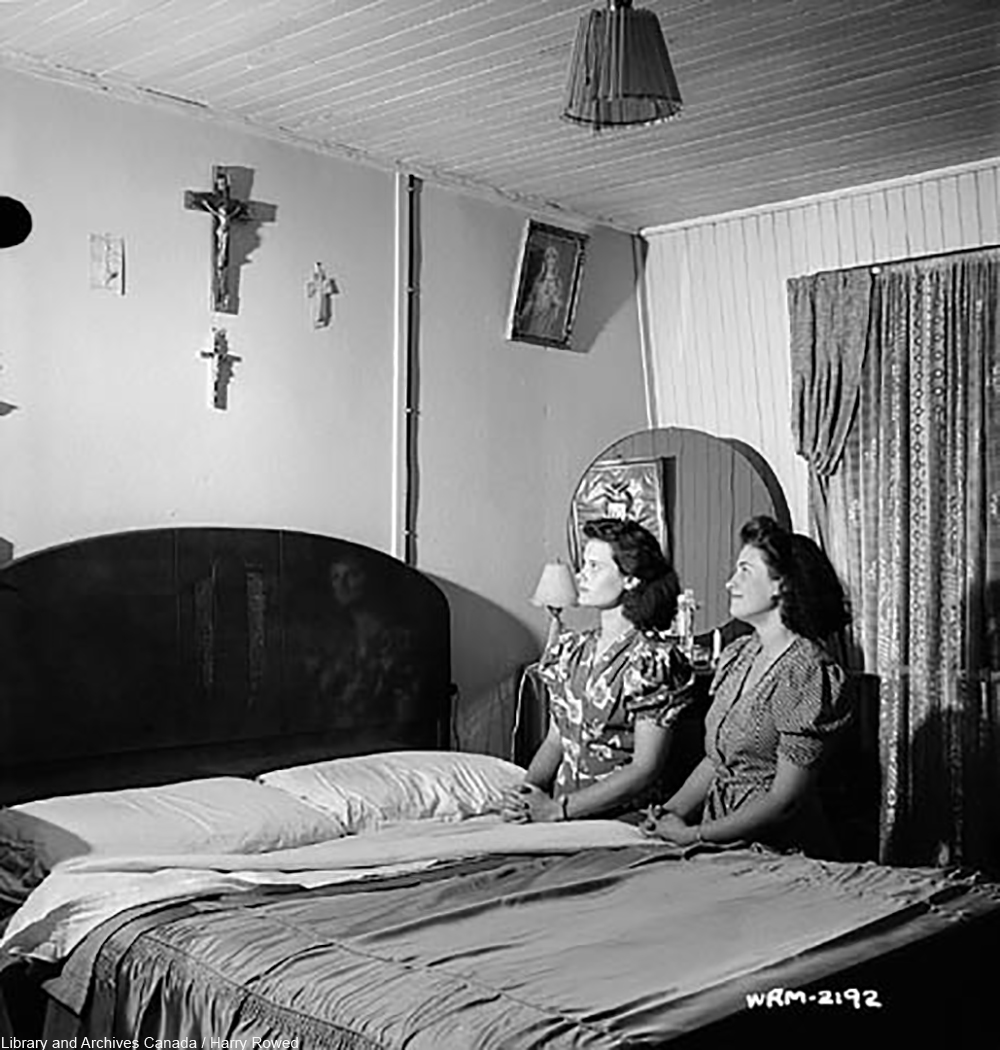 The answer to the question of “did people really did sleep in separate beds back in the day?” really depends on how much money the family had and how big their house was. Certainly some of them did, as evidenced by marriage books that advised the practice avidly – as in this 1902 book on the subject. Even as late as the 1970s some interior design spreads showed separate beds.

Some people today say it’s a much better to sleep separately for higher sleep quality, so the idea isn’t so crazy. As many as 25% of American couples don’t sleep in the same bed these days. However, there are those who fear that sleeping apart causes strain on a romantic relationship. 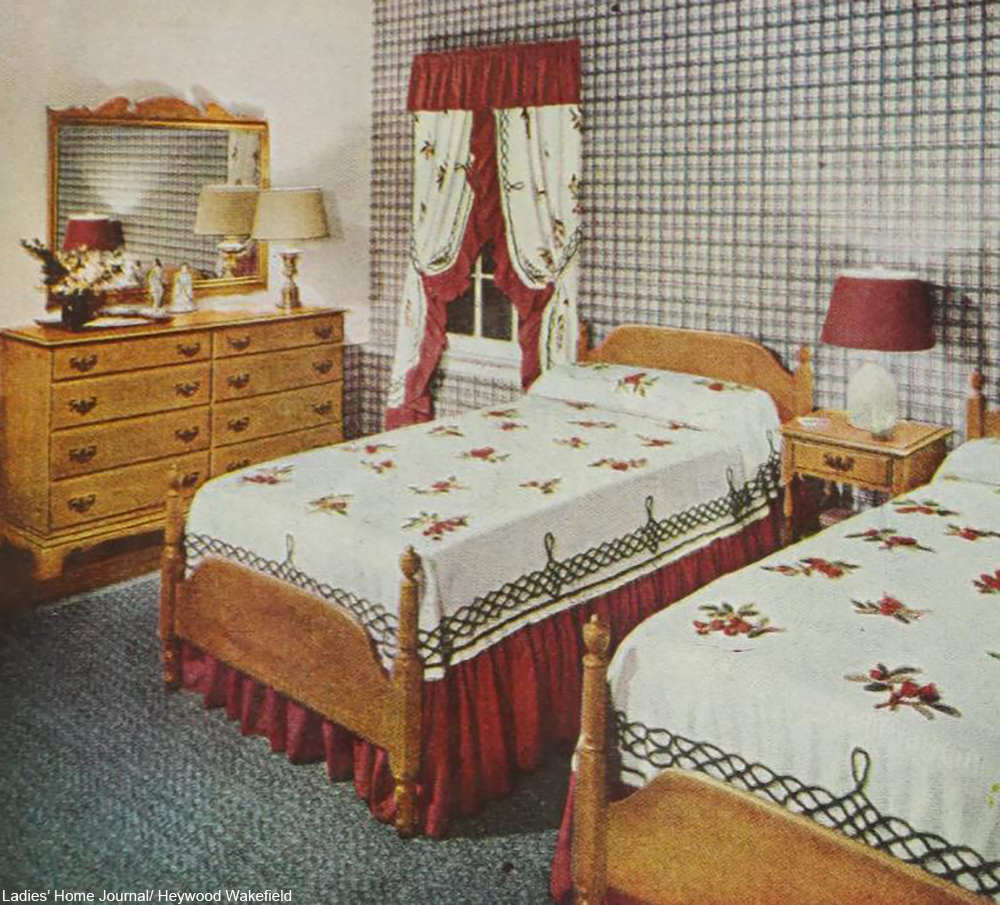 Do you think sleeping separately affects a marriage? Or is it something you currently do because both parties sleep better?

8 TV homes we wanted to live in back in the day: Click “Next Page” below!