What People Did Before Modern Mirrors Were Invented in 1835

Walk through any town or city and you will most likely see hordes of people checking themselves out in windows and anything mirror-like they pass by. Heck, you may very well catch yourself doing the same without even meaning to. Mirrors have changed the way we walk through the world, the way we dress, and many other facets of everyday life. The psychological impacts of so clearly being a subject of yourself can contribute to body dysmorphia and even eating disorders. 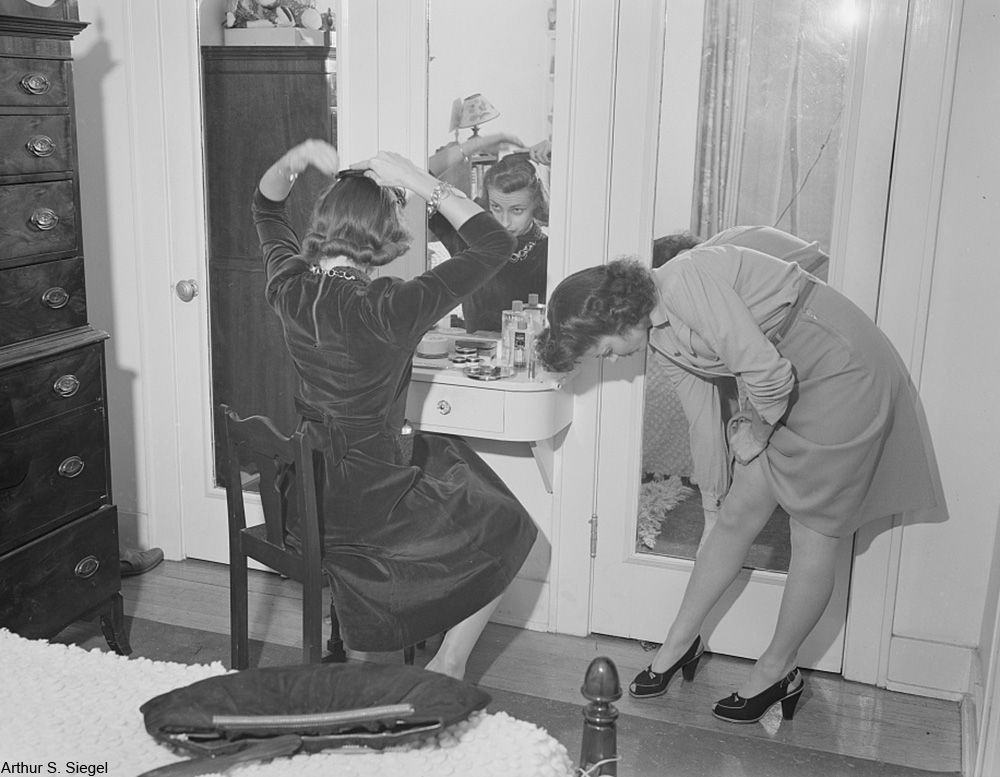 On the other hand mirrors have also given us something which our primitive ancestors could never have imagined: a perspective on how we look to the rest of the world. In the olden days it wasn’t that people weren’t curious what they looked like, it’s that they didn’t yet have the tech to make that happen. 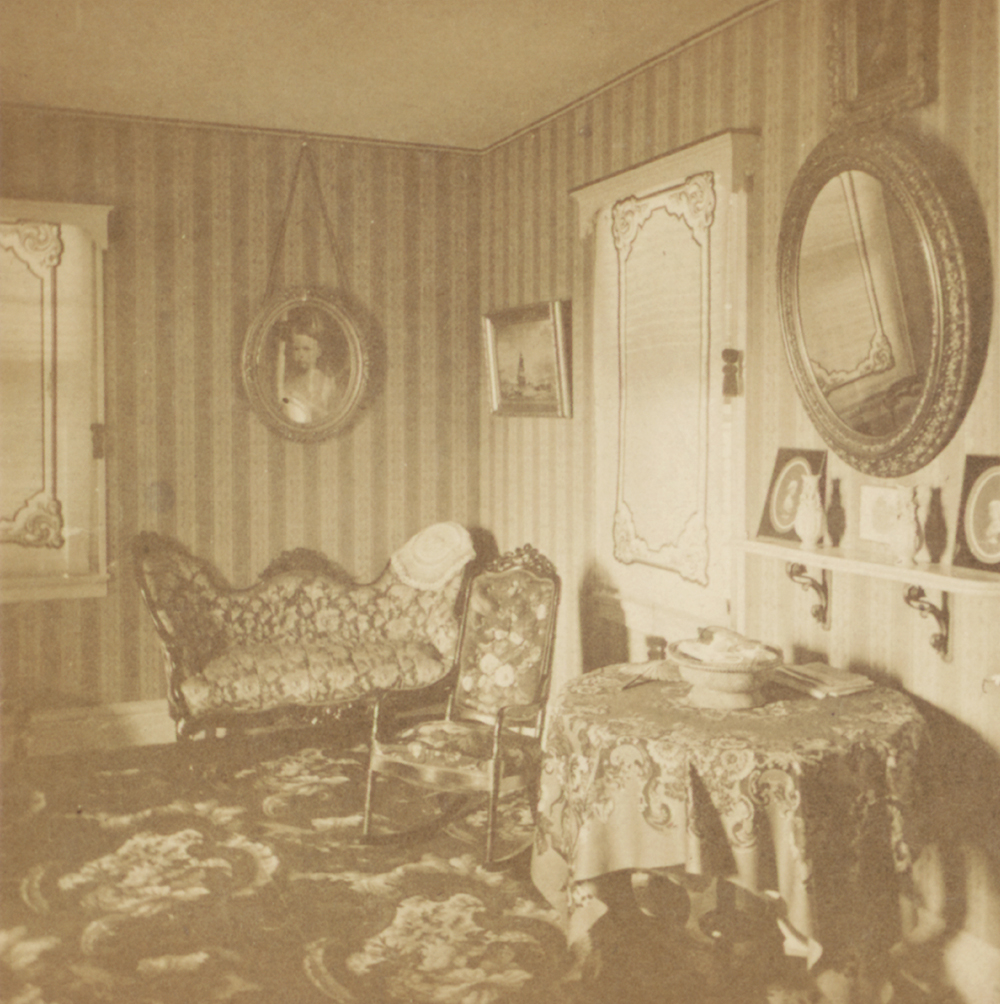 The mirror as we know it today was invented in 1835. The process of adding a silver nitrate coating to clear glass was created by Justus von Liebig, though today aluminum is frequently used. Despite the new ways of production being invented in the 19th century, early glass mirrors were still tough to make and quite expensive for an ordinary person to afford. The wealthy were the only people who could have bought such a thing. The concept of being able to know how the world perceived oneself was a matter of great privilege.

Even at the beginning of the 20th century, many poorer families would have only been able to afford a small mirror for checking their hair and bonnets- no full length mirrors in regular homes. 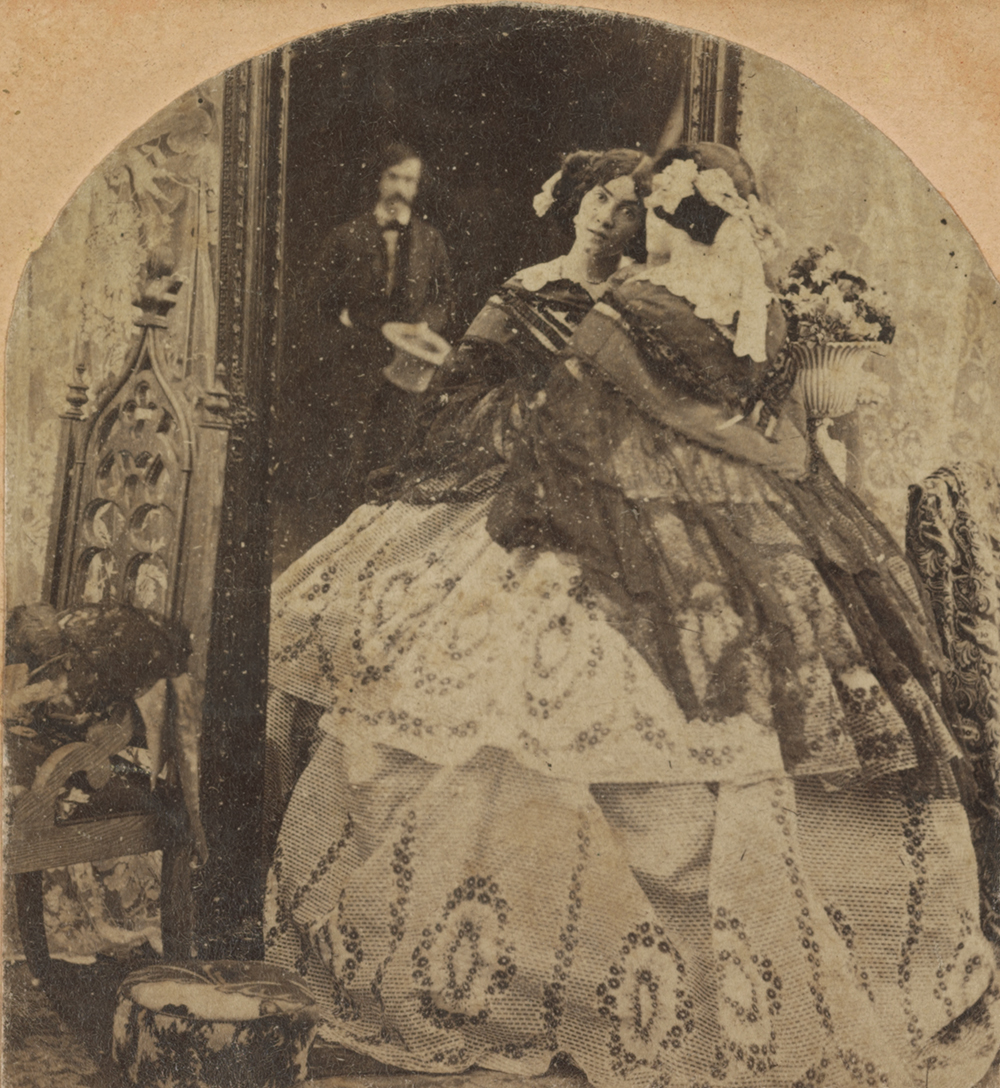 So, before the mirrors we know today, what did people use? The wealthy of Europe were using glass mirrors from the Middle Ages onward, but the surfaces weren’t flat and each mirror was a one-of-a-kind creation. The convex mirror was circular and often had a hefty frame around it. These pieces of glass showed a version of a reflection, but distorted- much like the mirrors in convenience stores and at sharp-cornered alley intersections. 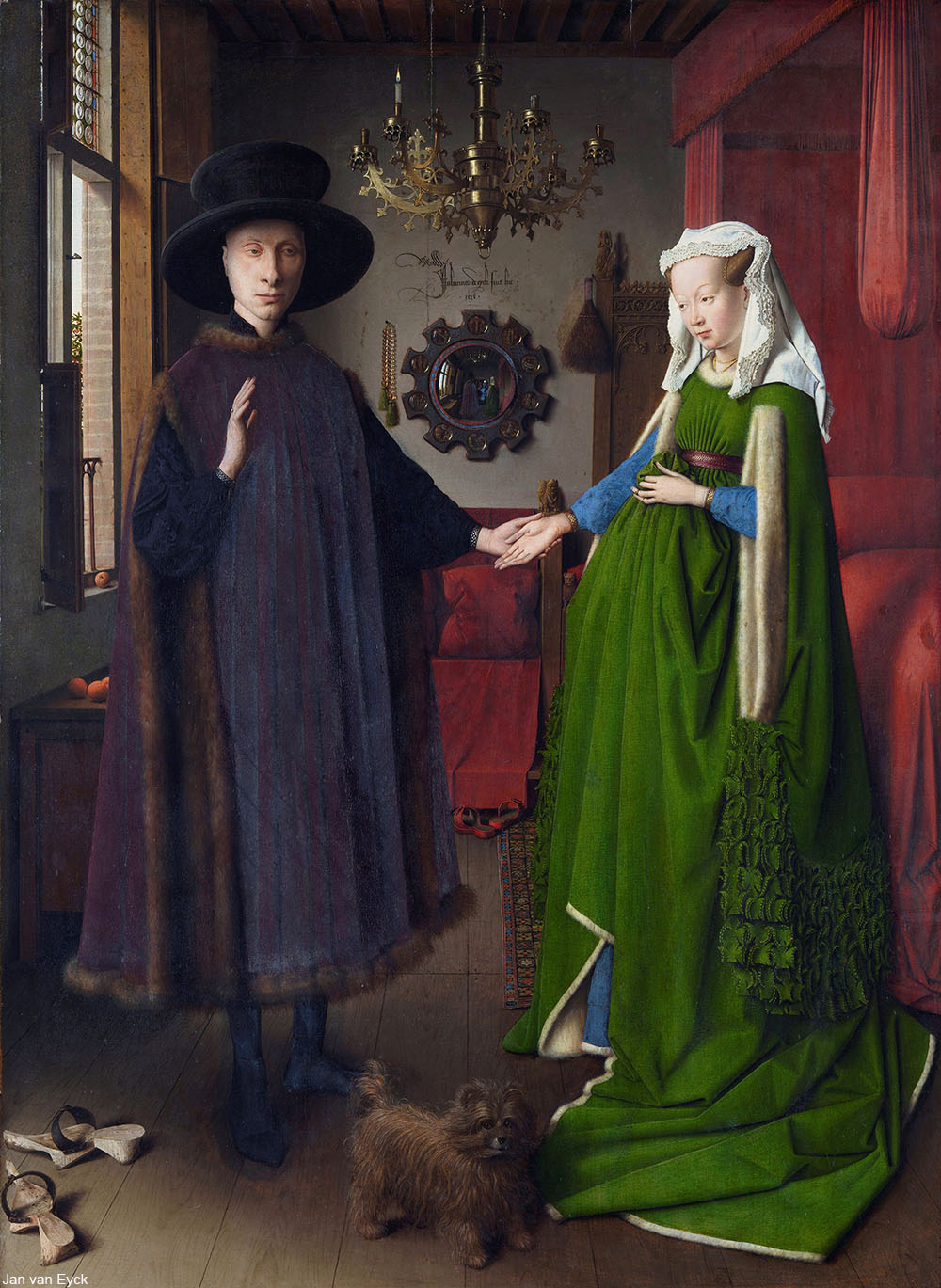 The 1434 portrait of an upper class couple (above), suspected to be of the Arnolfini family, shows many status symbols beyond the small, convex mirror on the wall. The lady’s voluminous dress trimmed with fur, the stained glass windows, the gold chandelier, and the oriental rug all show just how wealthy this family was.

Art and mirrors have gone hand in hand for quite some time. In fact, it was the rise of the mirror that precipitated the portrait in art. The notion of one’s image led to the preservation of that image by the elite who could afford to pay for commissioned art.

Early glass mirrors were backed with molten metal and the difference in the materials made for a lot of broken glass during production. It was in Florence that the process of low-temperature lead backing was created. In later years mirrors were also a closely-guarded secret of the Venetians.

Keep in mind that during this period only the wealthy could have afforded these small mirrors- nothing like what we have today. Before the glass-making boon of the Renaissance era, mirrors had been even more exclusive.

The earliest known mirrors were from Anatolia around 6,000 BC and were made from polished stone. The Mayans, ancient Chinese, Ancient Egyptians, and other cultures around the world did make mirrors for the ruling class, but they weren’t what we’d think of as mirrors today. Often made from highly polished copper, obsidian, or lead these mirrors were hand held and only reflected 20% of the light they were exposed to. This meant you could straighten your crown and that was about it. 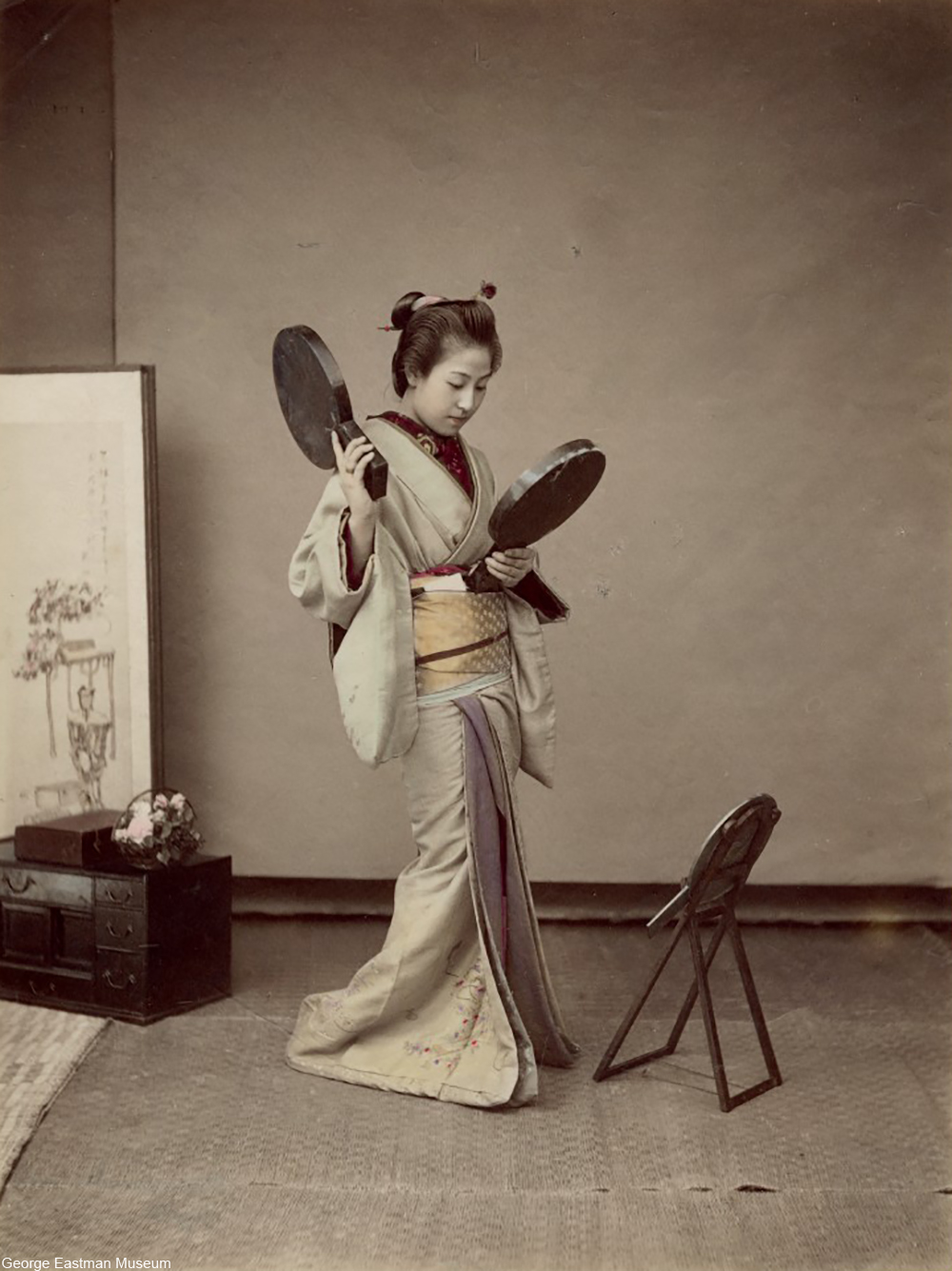 Japanese mirrors in the 19th century (shown above) would have been made from metal and required regular polishing in order to keep their mirror finish. 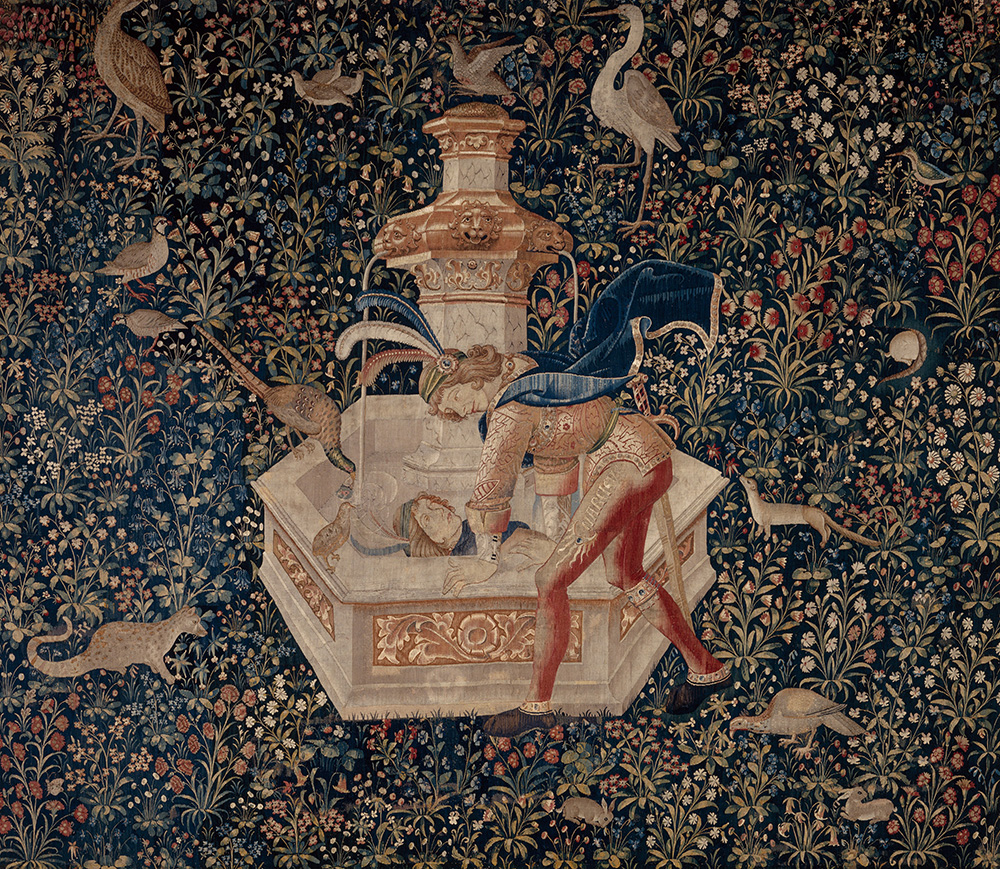 Before the manufacture of natural mirrors, people would have had to catch themselves in a pool of water- something which offered a distorted angle of what one looked like. Still, if it was enough for Narcissus then who are we to argue? The truth is that being concerned with one’s reflection and exact appearance is a very modern invention, one most humans across history lived without.