Former Auschwitz Prisoners And Lovers Reunite, He Finally Gets To Ask An Important Question 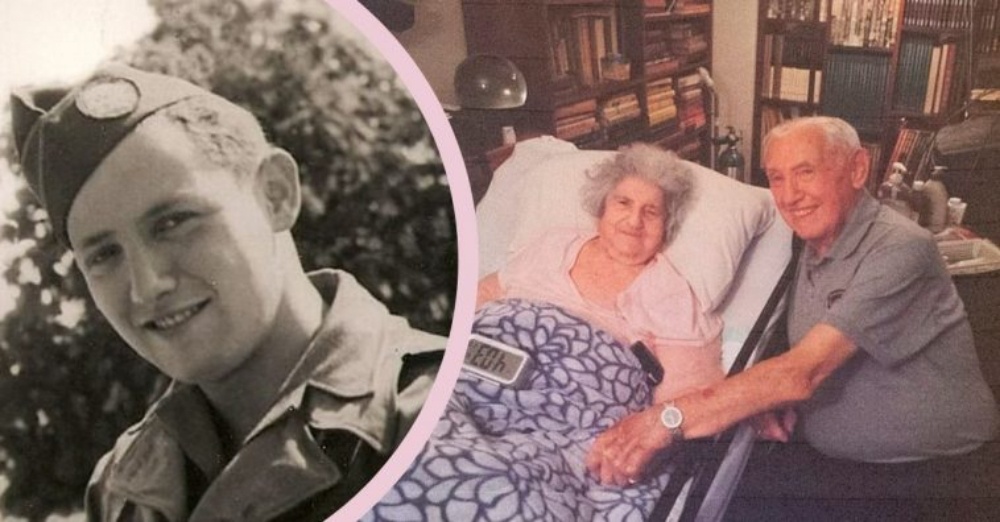 After seven decades, two survivors got to reconnect and fully realize their impact on each other’s lives

When all the world turned to hell around them, two souls crossed paths and brought to life something to combat the darkness: love. When two individuals found themselves brought to Auschwitz as prisoners, each day might have been the last. Yet not only did David Wisnia and Helen Spitzer survive one of the most dangerous places on Earth, but they also fell in love. Only seven decades later did these two Auschwitz prisoners get to reunite so he could ask an important question.

Their first meeting seemed to be one of chance, but looking back, Wisnia feels it was no coincidence. A fellow inmate introduced the two, and already they made a unique sight. Spitzer stood neat and clean, a woman able to speak to prisoners outside of the female quarters. As their fellow prisoners trickled out of their meeting spot, the two found themselves alone. Blessed with privacy in so invasive a place, the two began planning their future and continued relationship amid the chaos of World War II. 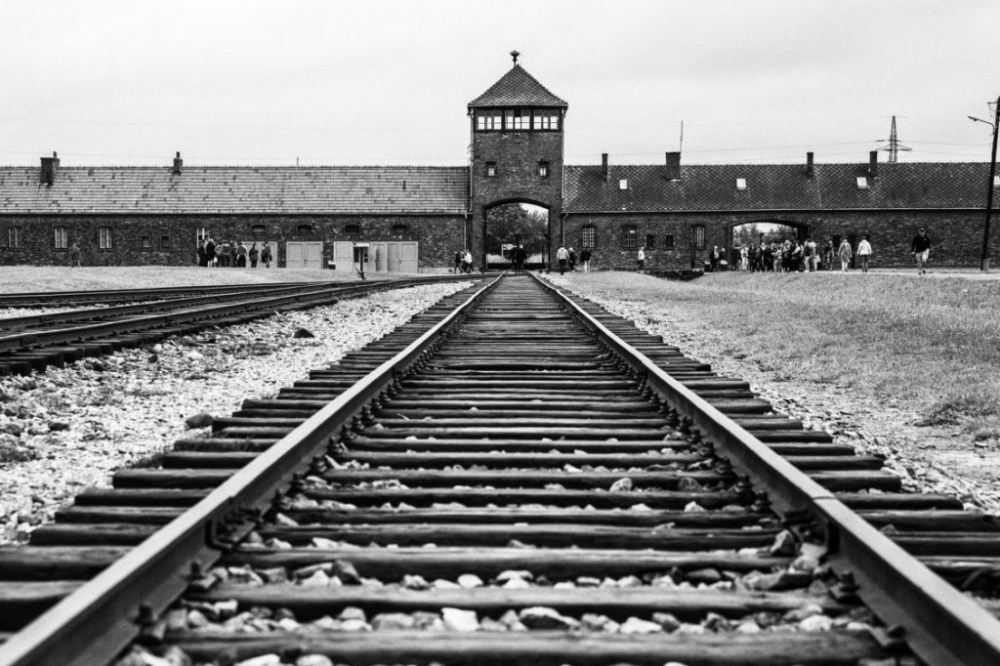 As prisoners in Auschwitz, Helen Spitzer and David Wisnia wanted to reunite after the fighting / Earth Trekkers

When Mr. Wisnia met Spitzer, known also as Zippi, in 1943 he was 17 and she 25. Both managed to survive the initial selection process at Auschwitz, avoiding the gas chambers but by no means gaining guaranteed security. Wisnia initially endured the harrowing job of collecting the bodies of prisoners who committed suicide. Eventually, he was reprieved when his singing talent made his captors appoint him as an entertainer.

Though she eventually got a reprieve as well, Spitzer faced harsh working conditions within the barbed fences of Auschwitz. At first, she endured very demanding demolition work at Birkenau. She nearly continuously had typhus, malaria, and diarrhea until a chimney collapse injured her back and pulled her from that line of work. Her strong educational background and fluency in German kept her from being executed and placed her in a new job that used her technical skills. As the camp’s graphic designer, she got slightly more comfortable accommodations, including the clean clothes and jacket Wisnia noticed when first meeting her. This cleanliness gave her a pleasant fragrance Wisnia enjoyed each time they met up. 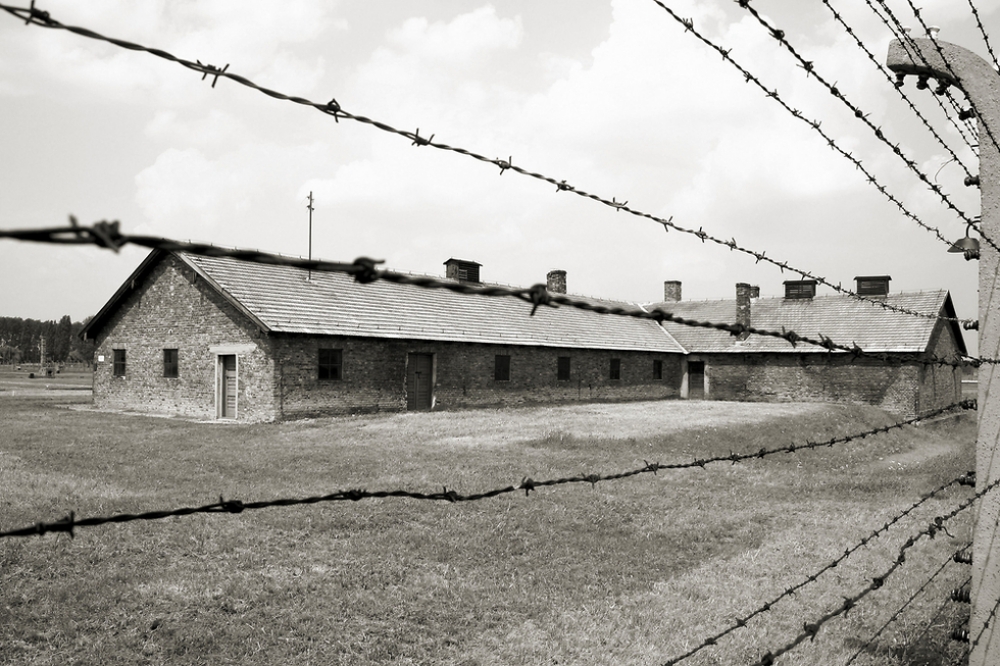 The two met where and when they could, hiding in nooks and guarded by fellow prisoners / Shutterstock

The two young prisoners carved out a corner of the camp just for themselves for their second date. They met at the barracks between crematorium 4 and crematorium 5. Ascending a ladder made of prisoners’ clothing, the two hid away in a nook amid hundreds of piles. Spitzer had set up the space just for them.

At age 93, Mr. Wisnia reflected upon his time with Spitzer and acknowledged how important her guidance was. “I had no knowledge of what, when, where,” he stated. “She taught me everything.” After the fears over the risks they took subsided, both could appreciate each other’s presence more. “She chose me,” he said. Though they stayed cautious, they dedicated moments to sharing glimpses of their lives before Auschwitz. Mr. Wisnia’s musical affinity came from his father, who loved opera and who faced an untimely death in the Warsaw ghetto. Spitzer shared this love of music and taught Wisnia a Hungarian song. 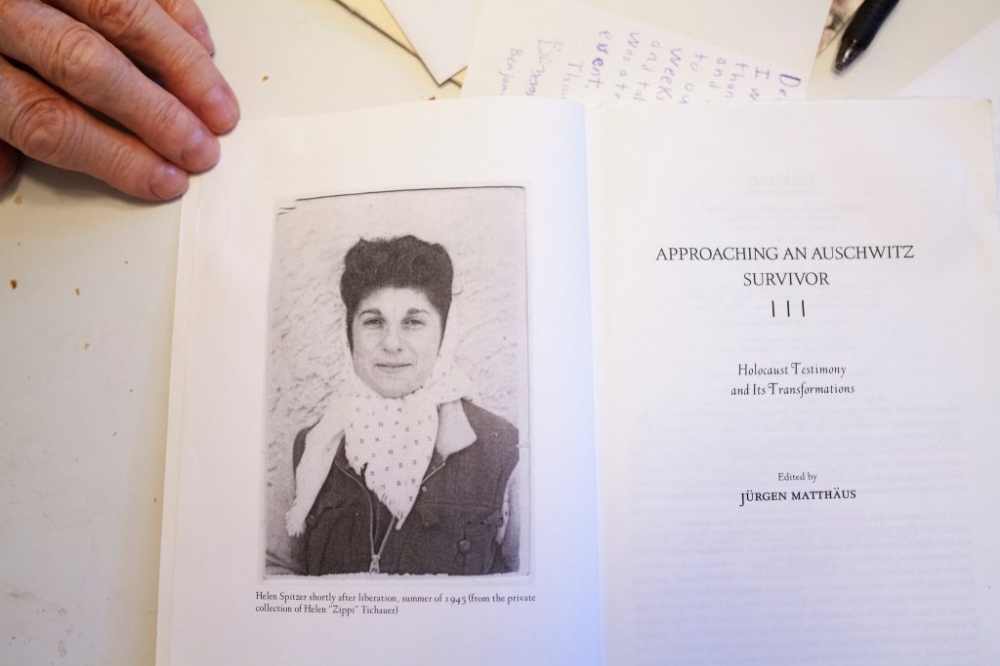 Maintaining a relationship with each other gave the young couple hope. They planned out an entire future shared between them when the dust faded and gunshots fell silent, when they could find each other one final time and stay openly, safely, happily together. Things did not happen quite as they envisioned, though they kept a finger on the pulse of realism, always knowing death could befall either of them as surely as the Nazi war machine could have them separated to opposite corners of Europe.

Still, they persisted, finding salvation not just with each other but through other connections. Spitzer walked a torturous line, cautiously using her position to grant comfort to other prisoners. Sometimes these favors came back around to help her and Wisnia. She paid fellow inmates with food to watch out for SS officers when she met with her lover. Ultimately, her work simply gave others a reprieve, such as when she used her graphic design background from a Slovakian technical college to reassign prisoners to easier work around the camp and barracks. This too came with a price, though. “For everybody you saved, you were condemning someone else,” says Dr. Atina Grossmann, a Cooper Union professor who interviewed Ms. Spitzer for the book Approaching an Auschwitz Survivor. “You had to be very precise, and that’s how you kept the Germans at bay.”

The tide of war reshaped their plans 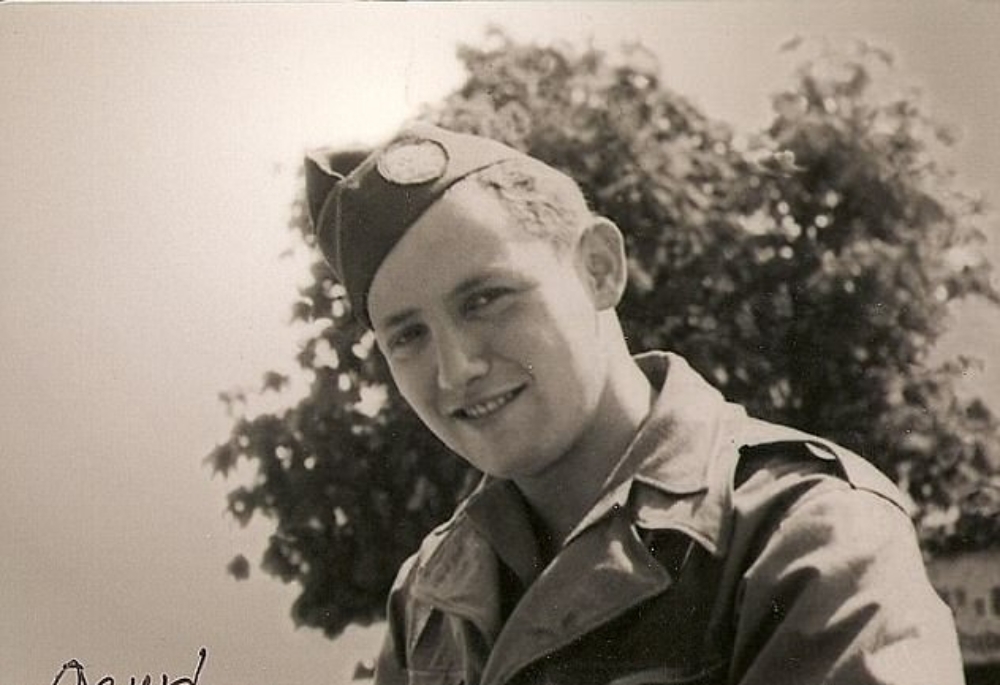 As the Nazis got word of the Red Army drawing closer to their death camps, they began to try and hide proof of their crimes. Prisoners were either executed, relocated, or abandoned as the Germans moved from the path of the approaching Allies. Aware of their guaranteed separation, Spitzer and Wisnia finalized their reunion plans during their last meeting. They promised to meet at a community center back in Warsaw as soon as the fighting subsided enough for them to make it there.

Sure enough, soon after, Wisnia was transferred to Dachau concentration camp in December 1944. On a death march from Dachau, Wisnia happened upon a hand shovel. The small item came to represent a whole new life opened up to him, a life of freedom and possibility. With a great swing, he struck a nearby SS guard and sprinted away. While hiding in a nearby barn, Wisnia heard tanks. Knowing that the Allies were continually stampeding over German-occupied territory, Wisnia rushed over to what he thought would be Soviet troops. There, he was greeted by American troops, and even in his rush of disbelief and excitement, Wisnia could still remember the address of his aunts who had moved to the Bronx a decade ago. The soldiers before him took Wisnia in, giving him food, a uniform, instructions on how to fire a gun, and hope. Wisnia was done with Europe. After that meeting, “I became 110 percent American.”

Fate wanted them to cross paths once more 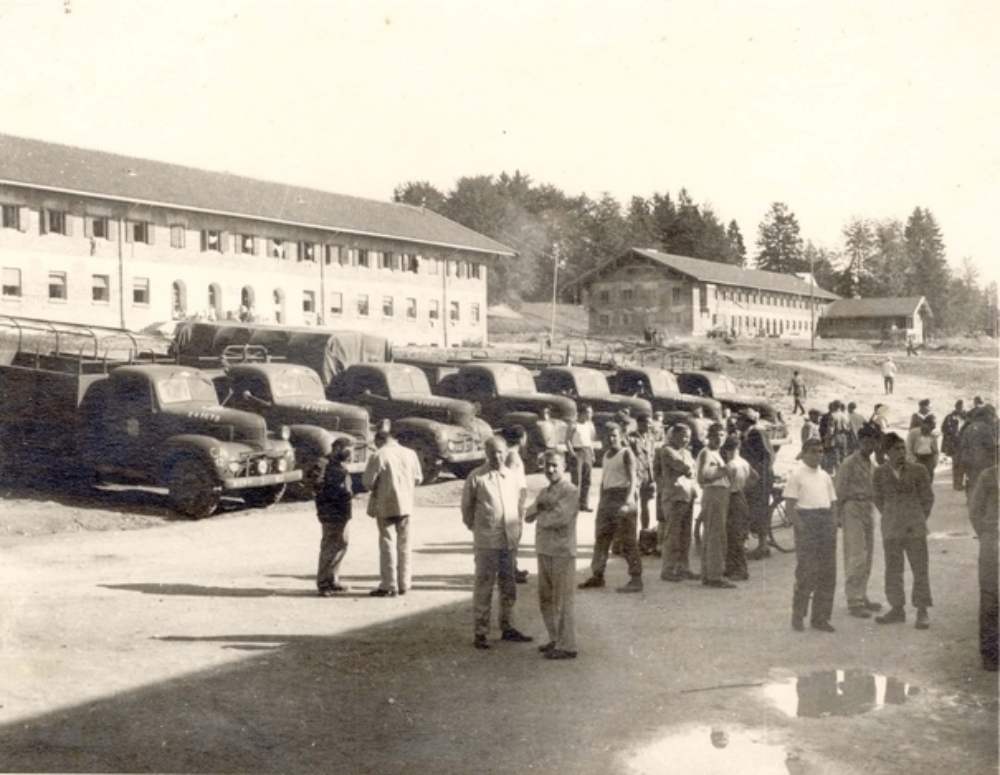 After escaping a death march, Spitzer dedicated her time to helping those at Feldafing displaced persons camp / Geni

Wisnia embraced his newfound Americanness with the troops. Together, he helped in various ways, from translating to fighting, to delivering supplies to Feldafing, the first all-Jewish displaced persons camp in Germany. Ms. Spitzer too narrowly escaped death by removing a red stripe from her jacket as she and others walked on a death march from Ravensbrück women’s camp. Without the conspicuous mark, she was able to blend in with the nearby civilian population. She kept details of her time thereafter vague, only mentioning efforts to smuggle Jews to safer places around Europe.

She resisted the urge to reunite with her surviving brother, who had just gotten married in their native Bratislava, Slovakia. Wanting him to fully embrace this start to a new life, she continued on and found herself in Feldafing. The two survivors found themselves right in the same camp in war-torn Europe…but neither was aware. “I would drive over there to Feldafing, but I had no idea she was there,” Mr. Wisnia stated. With thousands of lives uprooted, including her own, Ms. Spitzer met and married Erwin Tichauer, Feldafing’s acting police chief and a United Nations security officer. With her renewed position of authority, she once again helped those affected by the Holocaust. 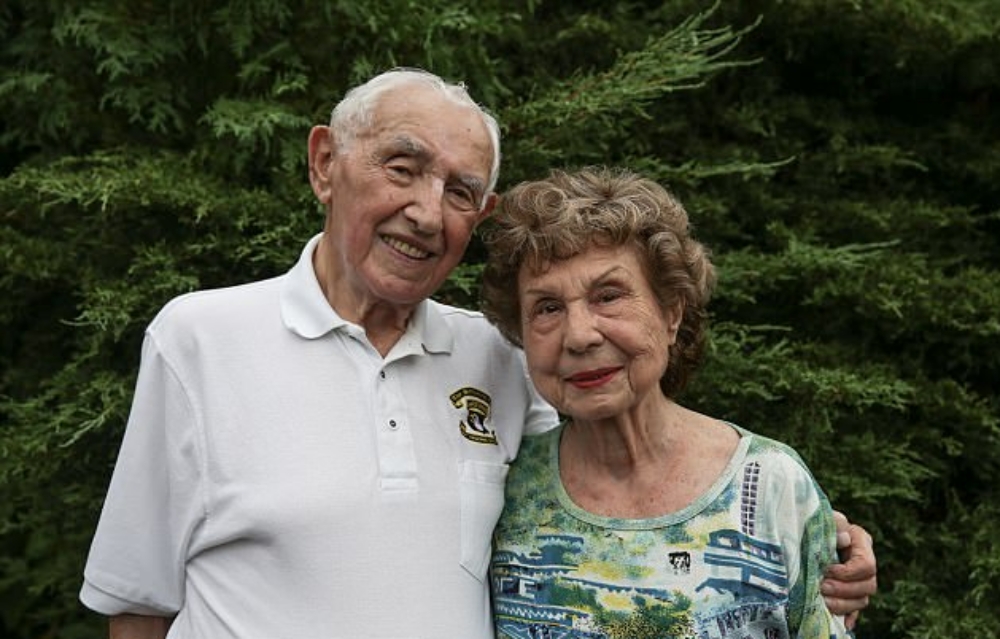 Both individuals got to separately realize their full potential after their feats of endurance in Auschwitz. After embracing his role with the American military, Mr. Wisnia reunited with his older relatives already in New York, where he continued to embrace his new home far from the echoes of war and genocide. In 1947 he met his future wife at someone else’s wedding, a woman fittingly named Hope. Spitzer too eventually found herself in America, pursuing a life dedicated to humanitarian causes. She did not let her time at Auschwitz direct her; instead, it came to be another example of how she used her position and skill to better the lives of others throughout her years.

Eventually, Wisnia heard of Spitzer’s survival and residence in America. He planned a reunion for the two of them, but as he waited, he found himself alone without his past lover. “She never showed up,” Mr. Wisnia recalled. “I found out after that she decided it wouldn’t be smart. She was married; she had a husband.” After leaving such an impact on each other’s lives, however, Wisnia wanted them to have the chance to reconnect. He persisted, all the while sharing his war stories and tales of the daring romance shared between two battered – but determined- prisoners at Auschwitz who dared to love.

From Auschwitz to America, Helen Spitzer and David Wisnia got to reunite and remember their love 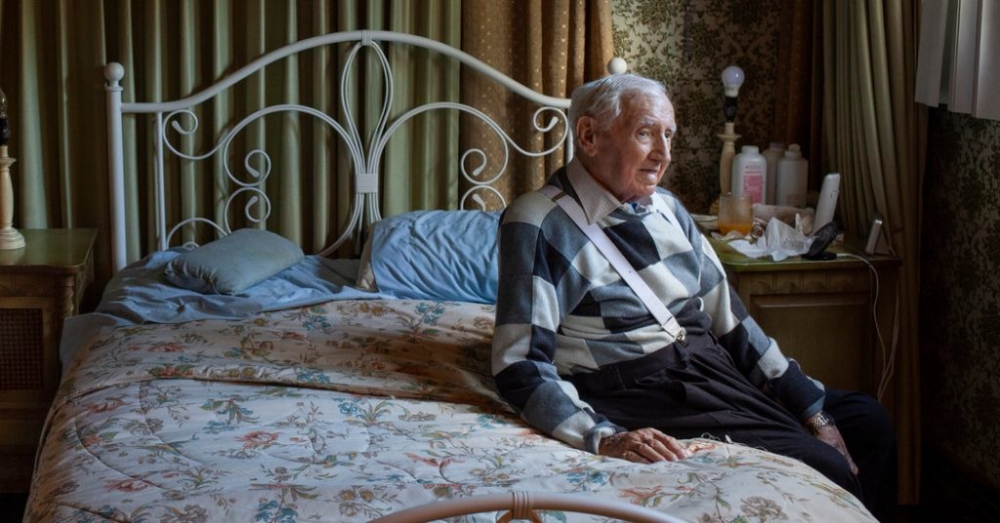 Wisnia wanted to meet sooner, but Zippi was cautious as she had already married another / The New York Times

In August 2016, Wisnia got his wish, and he got to reconnect with his first love under safer circumstances than what they faced decades ago. As he waited to arrive at their meeting spot, questions pressed in on Mr. Wisnia. He did not know much about Spitzer’s life, despite all their starry-eyed planning and careful conspiring. All the while, though, he’d harbored a suspicion that the sweet-smelling, neatly-dressed prisoner had helped keep him alive against all odds. Wisnia wanted to know for sure if his suspicions were correct.

He found the woman who’d touched his and so many other lives in a hospital bed, tended to by an aide. Her husband had died in 1996 and the couple had never had any children. The years ate away at her hearing and sight, and the nearby phone became her connection to the outside world. Despite her caution years ago, when “Zippi” saw Wisnia, “her eyes went wide, almost like life came back to her.”

When the two former Auschwitz prisoners reunite, they enjoyed happiness they could not when they met 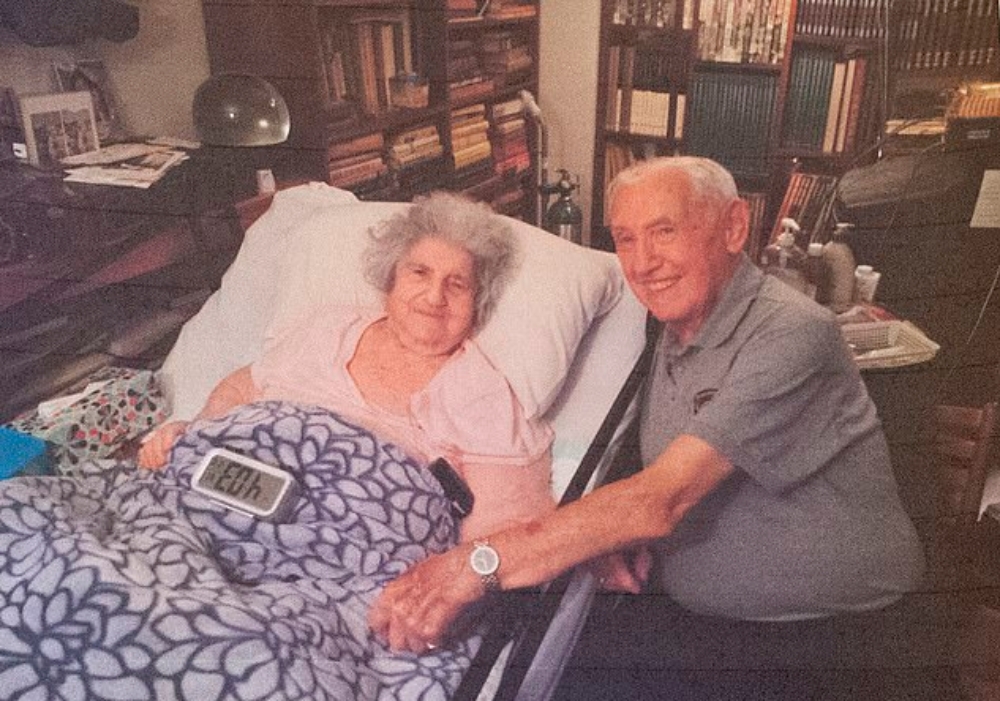 “It took us all aback,” Wisnia told his grandson. Even bed-bound, cautious Spitzer let herself express joy and good humor when she saw her old boyfriend. She said to me in front of my grandchildren, she said, “‘Did you tell your wife what we did?'” Wisnia recalled with laughter in his voice. “I said, ‘Zippi!'”

For two hours, they spoke. Wisnia filled her in on all that had happened to him since he was sent to Dachau. But, he could not wait any longer to find out the role Spitzer had played in his survival at the death camp. In response to his query, Spitzer raised five fingers. “I saved you five times from bad shipment,” she said in an accented voice. Quietly, she told him how she had followed their plan, waiting for him in Warsaw. She told him that their time in Auschwitz helped her fall in love. 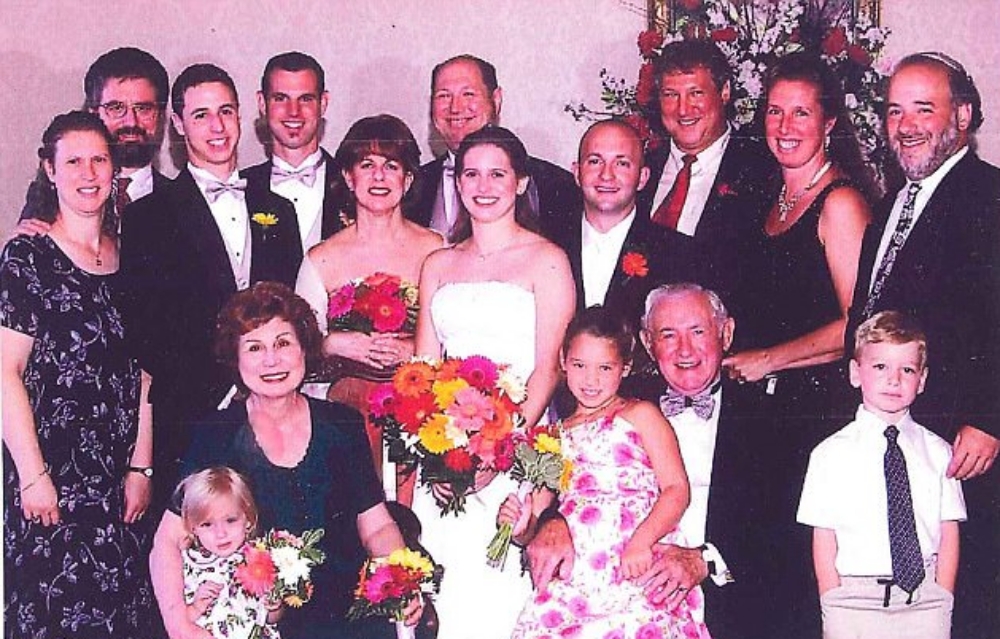 Astonished, Wisnia earnestly told her he had felt the same. Now that the two former Auschwitz prisoners – survivors – reunited, words left unspoken got to be voiced aloud. Upon her request, he took her hand in his, he sang the Hungarian song she’d taught him years ago, glad to show this survivor he still remembered the words.