Many of us admire the simple, yet appealing look of spongeware pottery. Sometimes this style is also called spatterware, although some experts take issue with the interchange of names since the size of the speckles varies between the two (as does the original production methods). Whatever you call this look, it’s a quaint connection to the past and makes any kitchen seem just a little more like home. Find out about the history and value of spongeware below. 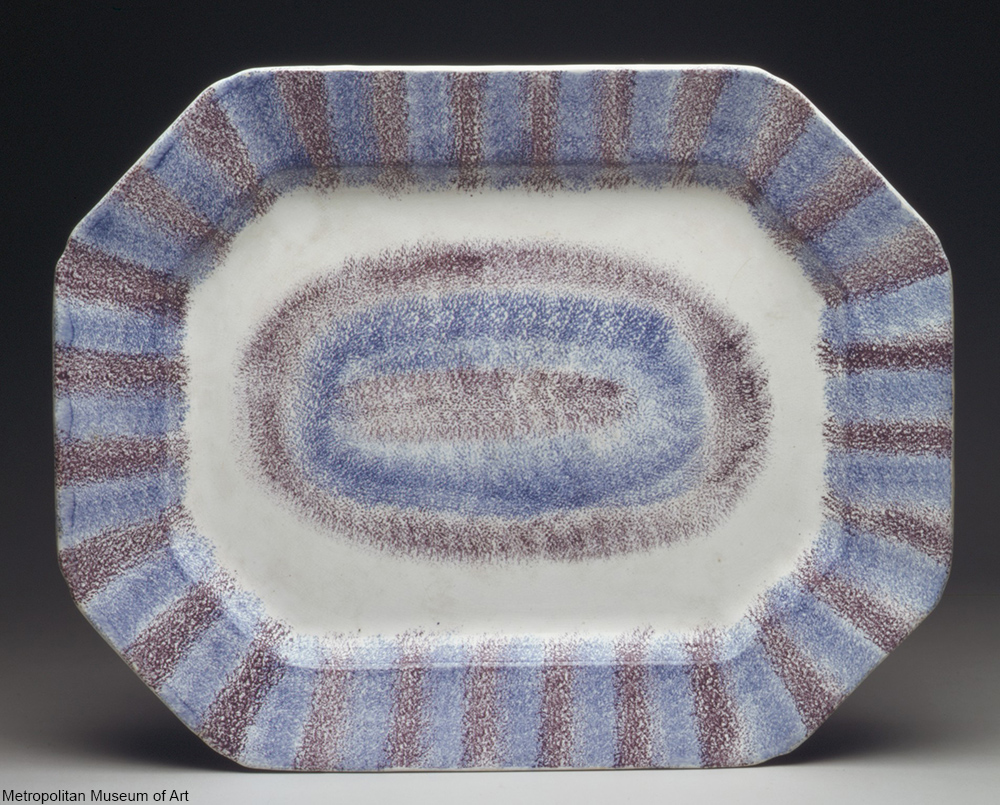 Early 1800s spatterware serving platter in the collection of the Metropolitan Museum of Art. Via/ Wiki Commons

Spatterware is a timeless style of stoneware that originated among the English potteries that revolutionized ceramic items in the 18th century. The first pieces were made by blowing colored glaze through a hollow pipe to create splattered designs. Late pieces use sponges, and later still transfers were used to create the desired effect.

Staffordshire is one area of England well known for making all types of ceramics, including spongeware. The style was so very popular that smaller potteries all around the U.K. copied the look and created these type of pieces.

Marlborough and Roseville are two American makers of the style, though these potteries started operations much later than their English, Irish, and Welsh counterparts. 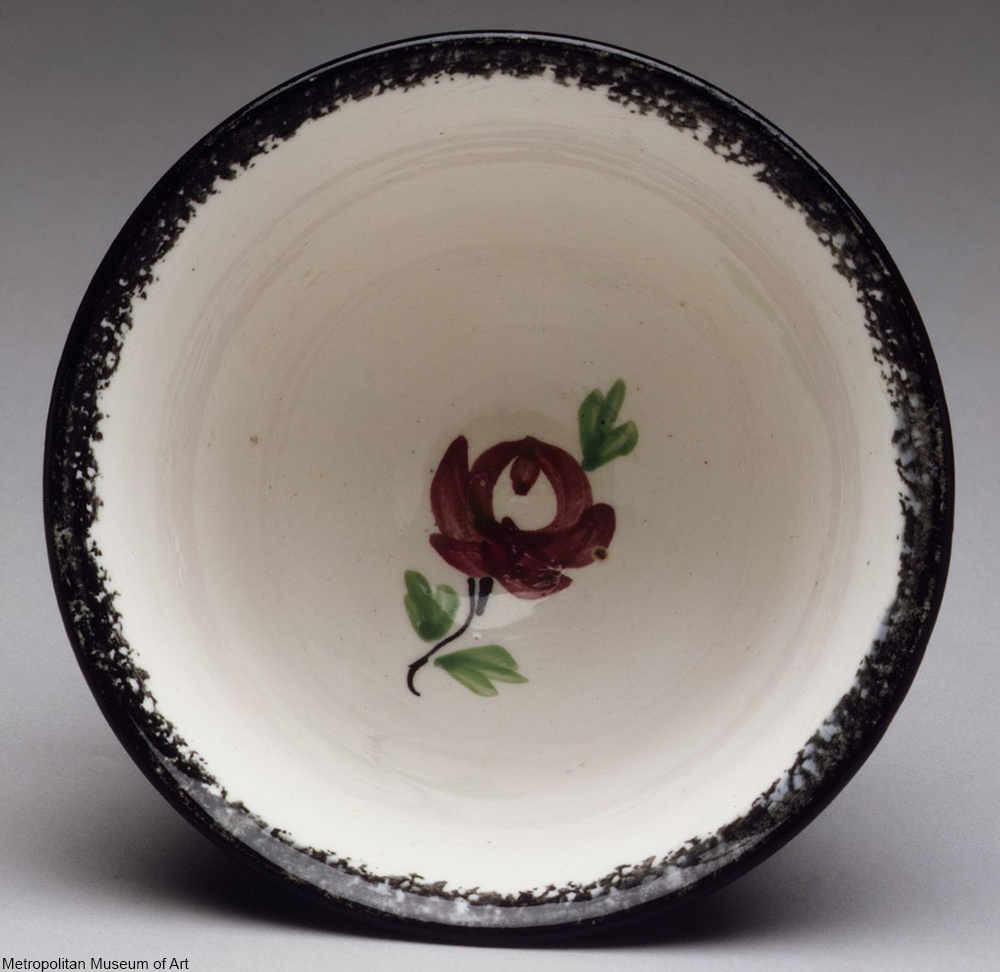 British spatterware from 1800-1830 in the Metropolitan Museum of Art collection. Via/ Wiki Commons

This type of pottery is known as stoneware, a type of ceramics that is made from strong clay and fired at higher temperatures than lesser types of pottery. This makes for an extremely durable final product, something which was very desirable in the colonial era when England had a near-monopoly on the ceramics market and exported ceramics around the world.

On some antique pieces the addition of flower motifs, embossed designs, names, phrases, or other designs added interest to what had been considered an increasingly-common style of dishes. However, the mixing of design motifs is generally found on 19th century and later pieces, but less so on 18th century English spongeware. 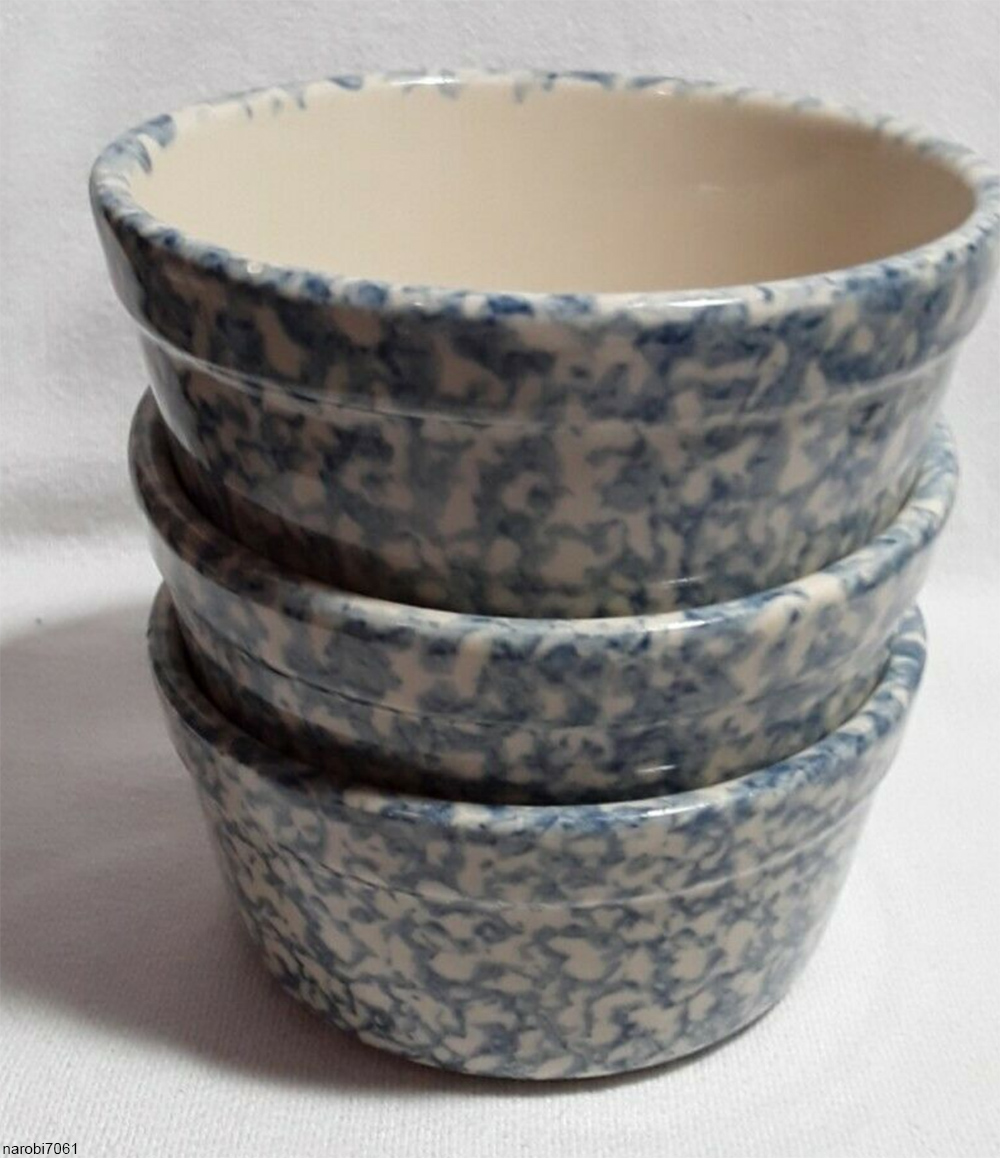 This type of pottery is still quite popular and is still being made today. Since most pieces of spongeware were so hearty, many older pieces still survive, so it’s really up to the buyer as to which features are most important to them.

Older spatterware pieces will often show obvious signs of being handmade, such as smears or incomplete sponge marks. The most common colors to find this type of stoneware in are the classic blue and white, but other colors were also created.

Modern reproductions will often have very uniform sponge marks, which is one way to tell them apart from antiques if no identifying marks are present. If you find a piece where the pattern overlaps in a line, it may be a piece of spatterware that was actually made using transfers instead of by hand, though this does not mean it is modern. 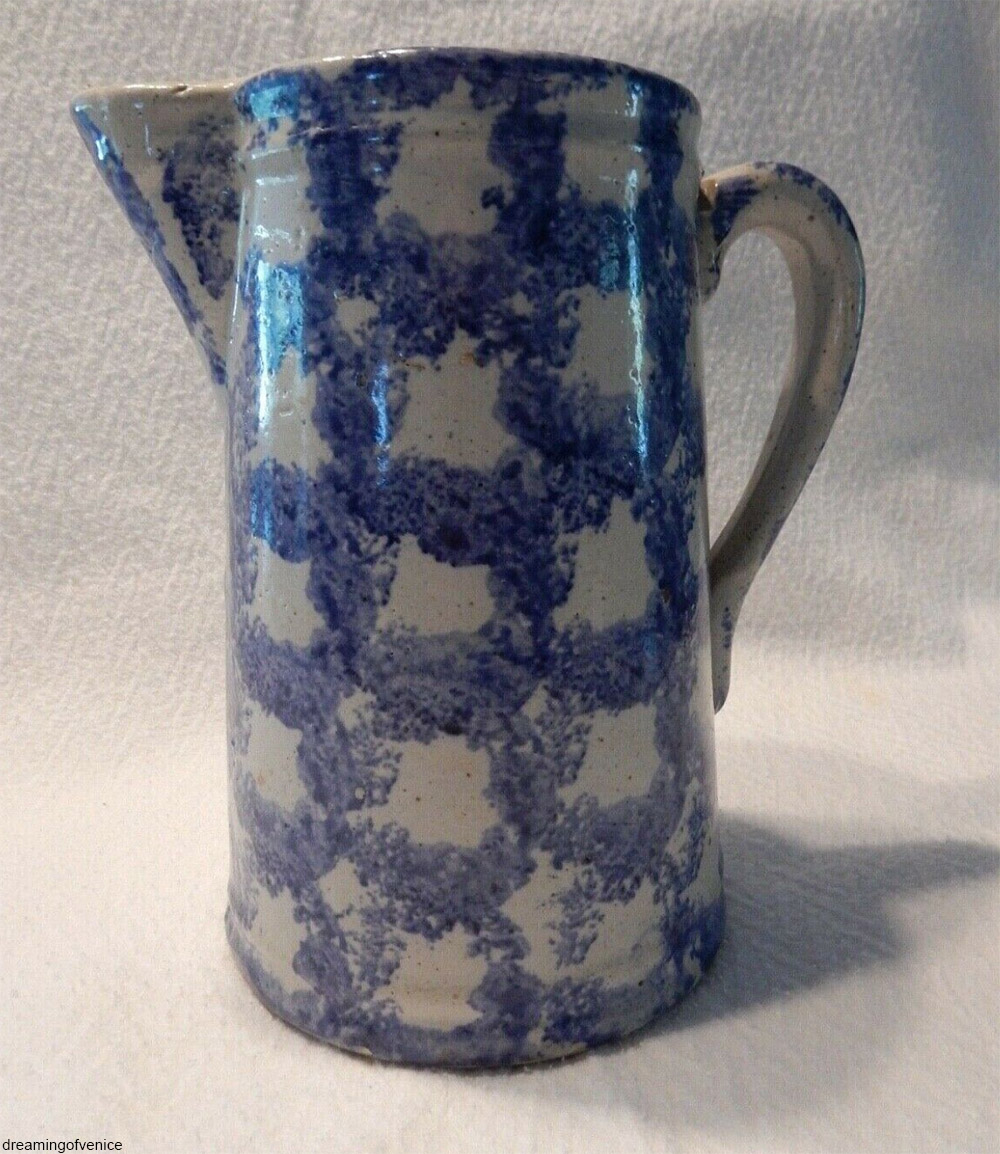 One of the more popular patterns for collectors today is the smoke ring or chickenwire style, which uses a highly organized ring shape to create the repetitive (though not perfect) pattern. Whether you like the chaos of a less regular spongeware pattern or the near-symmetry of the smoke ring patterns, there is something that appeals in each type of design.

The prices of antique spatterware have been on the rise as of late, with individual pitchers and serving platters selling for around $200 on eBay depending on condition and rarity. On the other hand upscale auction houses like Skinner’s can command $500 or more for a single item of spatterware.

Don’t let the high prices of some pieces intimidate you, though, because there are many pieces priced at under $50 to be found online and in antique shops.

The designer brand, Tory Burch, has recently released a line of spatterware ceramics in the tried and true blue and white colorway, but at a cost that far exceeds the price of many antique pieces. However, what one gives up in provenance one gains in being able to put modern pieces through the dishwasher and microwave.

One note is that older pieces may have been made with lead paint, which is one point in favor of using modern pieces to eat off of. 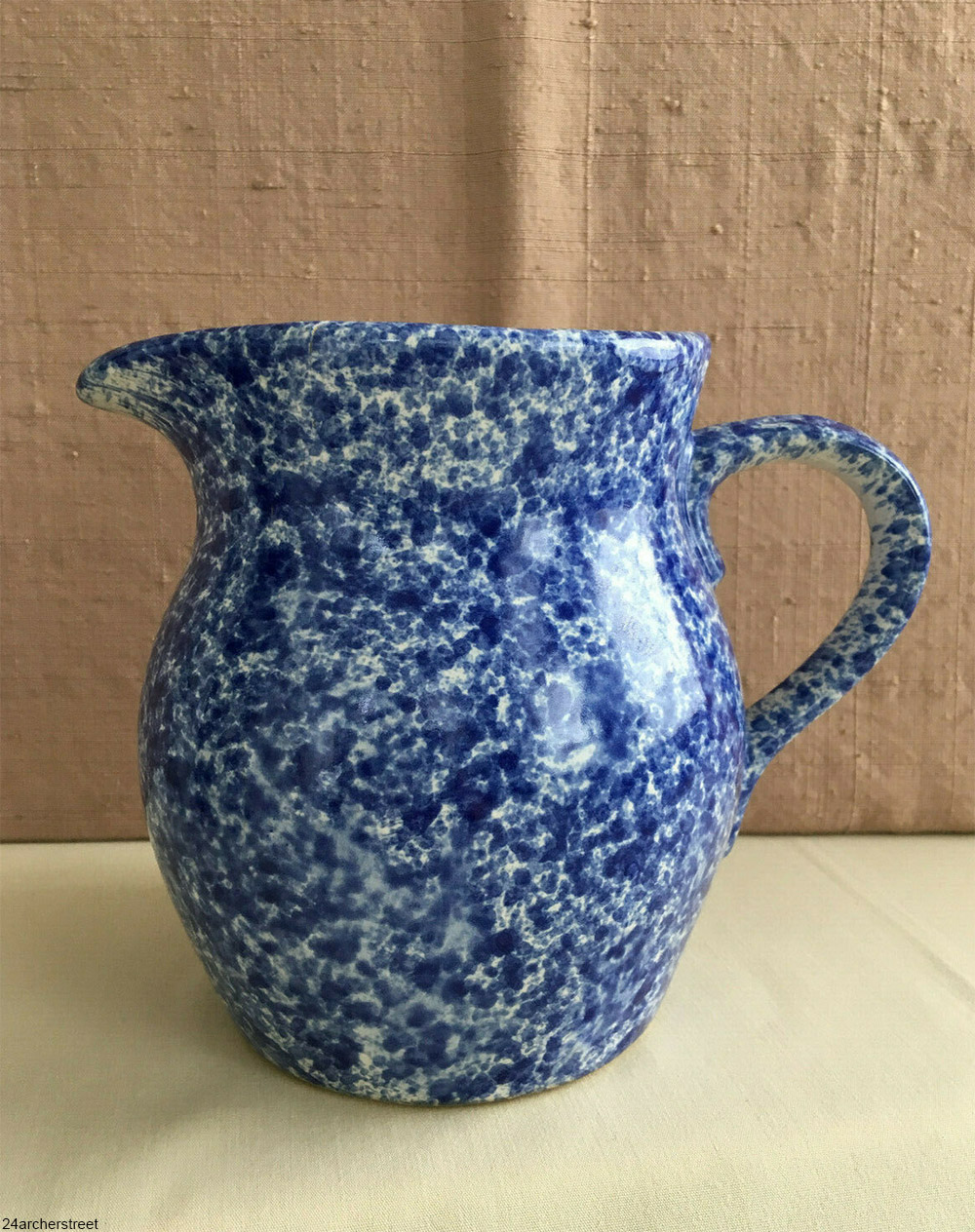 Whether you love to collect the old pieces (with all their defects and charms) or you love the ease of newer pieces, the beauty of spatterware is that it really is timeless. And, how many objects can you say that about?