It Doesn’t Get Much Prettier Than Milk Glass! Learn How To Identify These Beautiful Pieces.

Milk glass, aptly named for its lovely ivory coloring, had its heyday in the late 19th century. Collectors will find these pieces come in all different shapes and sizes, from the most basic plates to ornate serving platters. The especially rare pieces of milk glass remind us of America’s rich history and serve as gorgeous conversation starters! Scroll down to learn more about the history of these special antiques and how to identify and price your own collection… 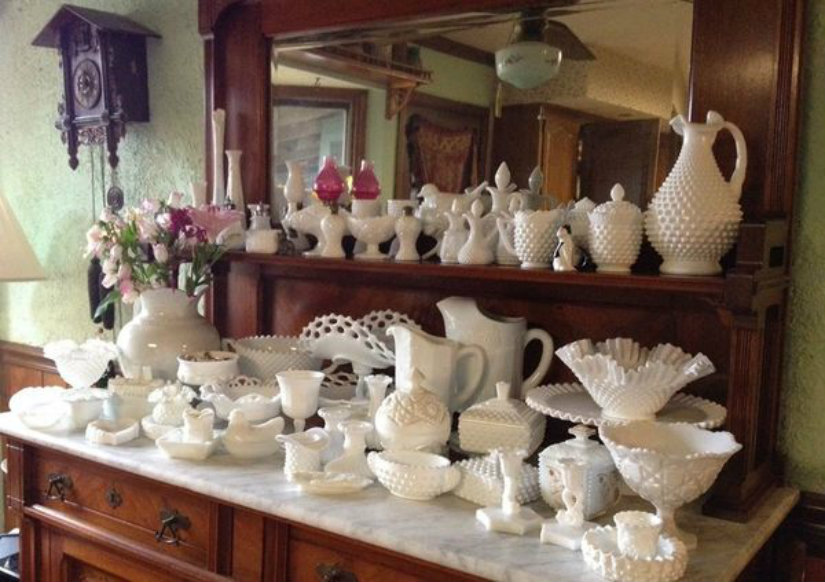 From Genevra Boucher: “Years of collecting Milk Glass too. Glad to see people are becoming aware of the very interesting glass items.”

Milk glass was produced around 300 years before it reached the height of its popularity, which began around 1870 and lasted through the early 20th century. When it came to milk glass, the French were the trendsetters, ushering it into its golden era and inspiring American glassmakers to follow suit. Today French milk glass is particularly valuable.

Emulating the French, well-to-do American families stocked up on milk glass dinnerware, serving dishes, and pitchers. The pieces, some bedecked with diamond-cut patterns, molded with latticework, or artfully painted, made a splash in turn-of-the-century America and remained popular until the days of the Great Depression. They came back into vogue during the 1960s thanks to the production of Hobnail milk glass, but fell out of the spotlight shortly thereafter. 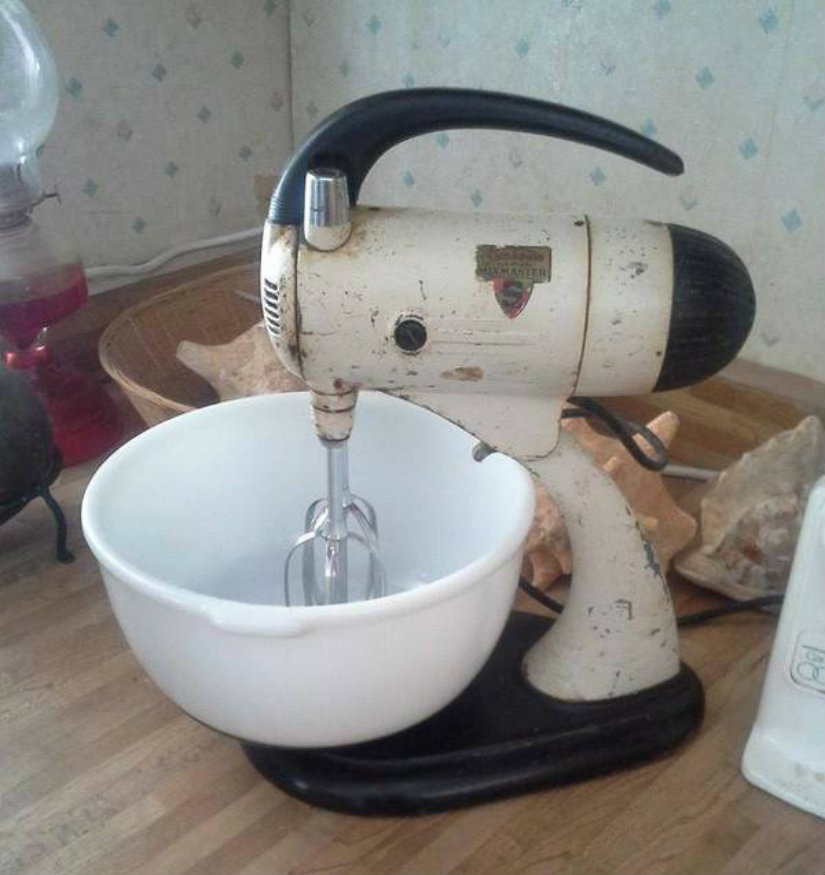 From Kristina Coon: “My (I believe) 1938 Sunbeam. I have another milk glass bowl and the original manual as well. I purchased this at a garage sale for a whopping $3. Works? You bet. I use it all the time. I am an avid cook and this is my favorite tool and display piece.”

Brands to look out for…

Milk glass is (quite literally) a centerpiece of American history, and today collectors gush over rare and one-of-a-kind pieces that highlight the nation’s past. Prominent figures often had milk glass produced in their honor, whether it was the bust on a casserole dish or a relief on a serving platter. If you’re a history buff, keep your eye out for plates featuring a border of 13 stars and George Washington’s likeness. Also of great fascination are the milk glass plates that launched the 1908 presidential campaigns of William Howard Taft and William Jennings Bryan. There’s even a rare platter featuring a Lincoln relief so ornate it’s speculated that the piece was part of dinner service at a commemorative event. 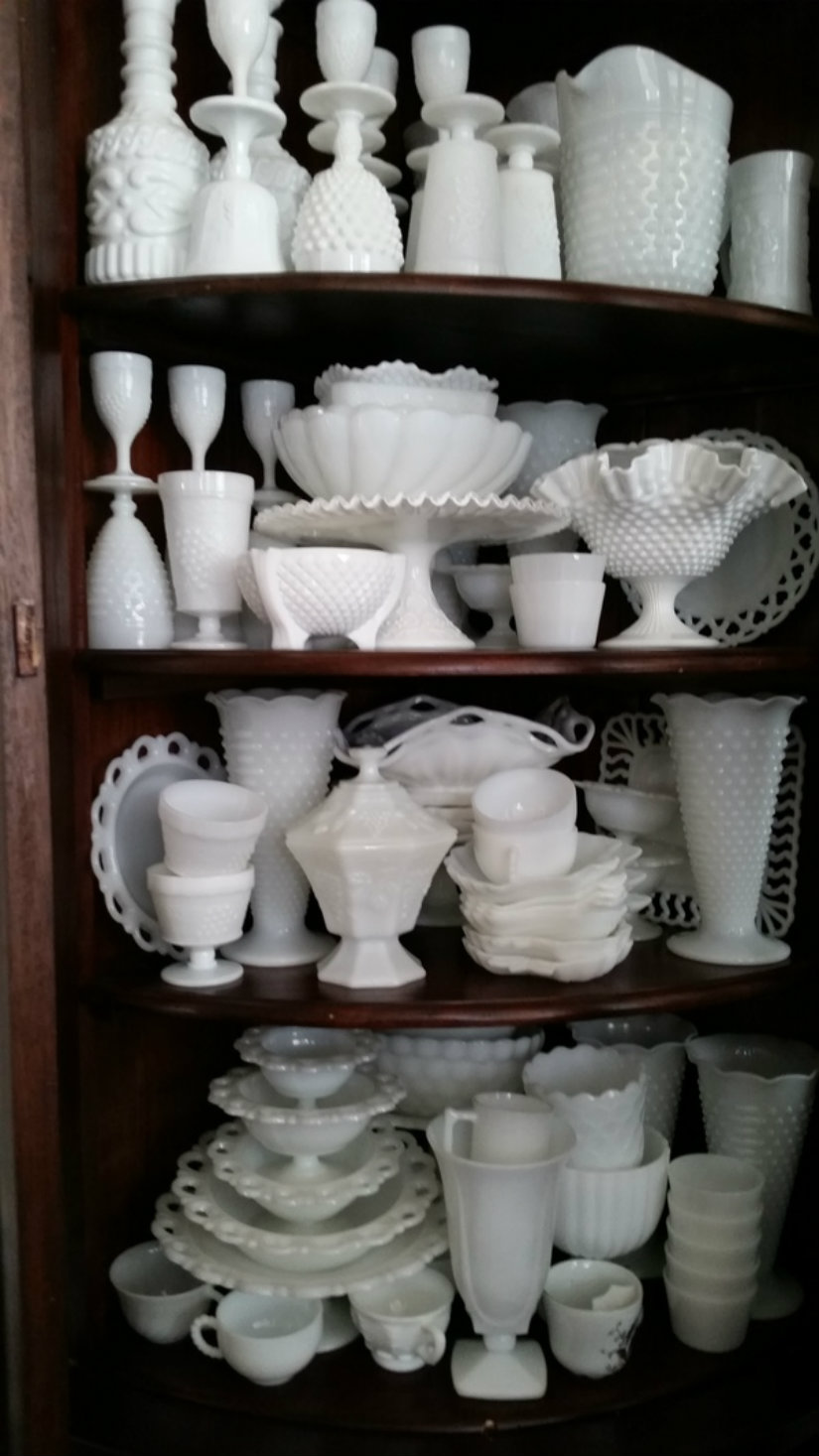 The cost of milk glass varies greatly depending on the age, condition, and design of the piece. The best way to get an idea of the value of your piece is to run a simple Ebay search of recent auctions or consult an appraiser. Here are some things to consider when identifying and estimating the value of your milk glass: