If you’re like us, then great historical movies are some of your favorites. We have always loved A League of Their Own and wanted to find out more about this wonderful piece of American history. The women of the All American League are beautiful, fierce, and talented. Their stories tell of a changing nation, an American public hungry for baseball, and of an old-fashioned way of doing things. Have a look at these amazing photos from the heyday of the All American Girls Professional Baseball League. 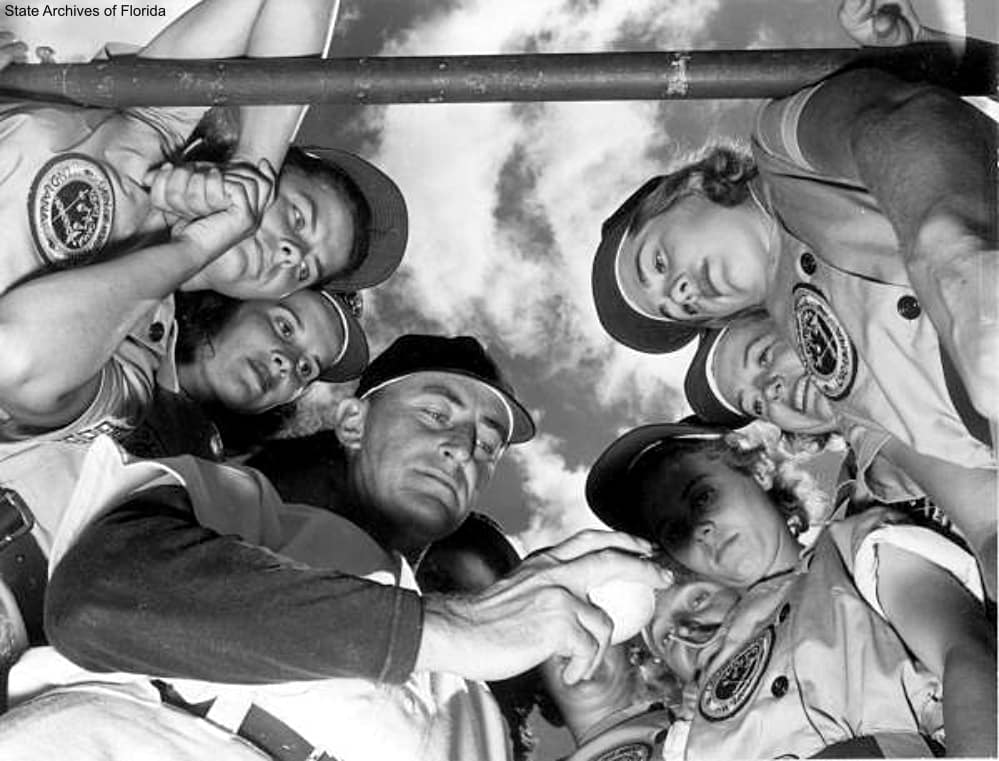 As World War II raged on in the early 1940s and consumed the world’s attention, the numbers of men drafted steadily rose. Male baseball players in the U.S. were fighting overseas and potential players were also being called for the the draft. Since fewer men remained, the future of the sport and the prospects of many baseball fields were left in question. As most baseball fields were struggling to break even at the time, the chewing gum mogul, Phillip K. Wrigley, was called on to find a solution that would help save American baseball. 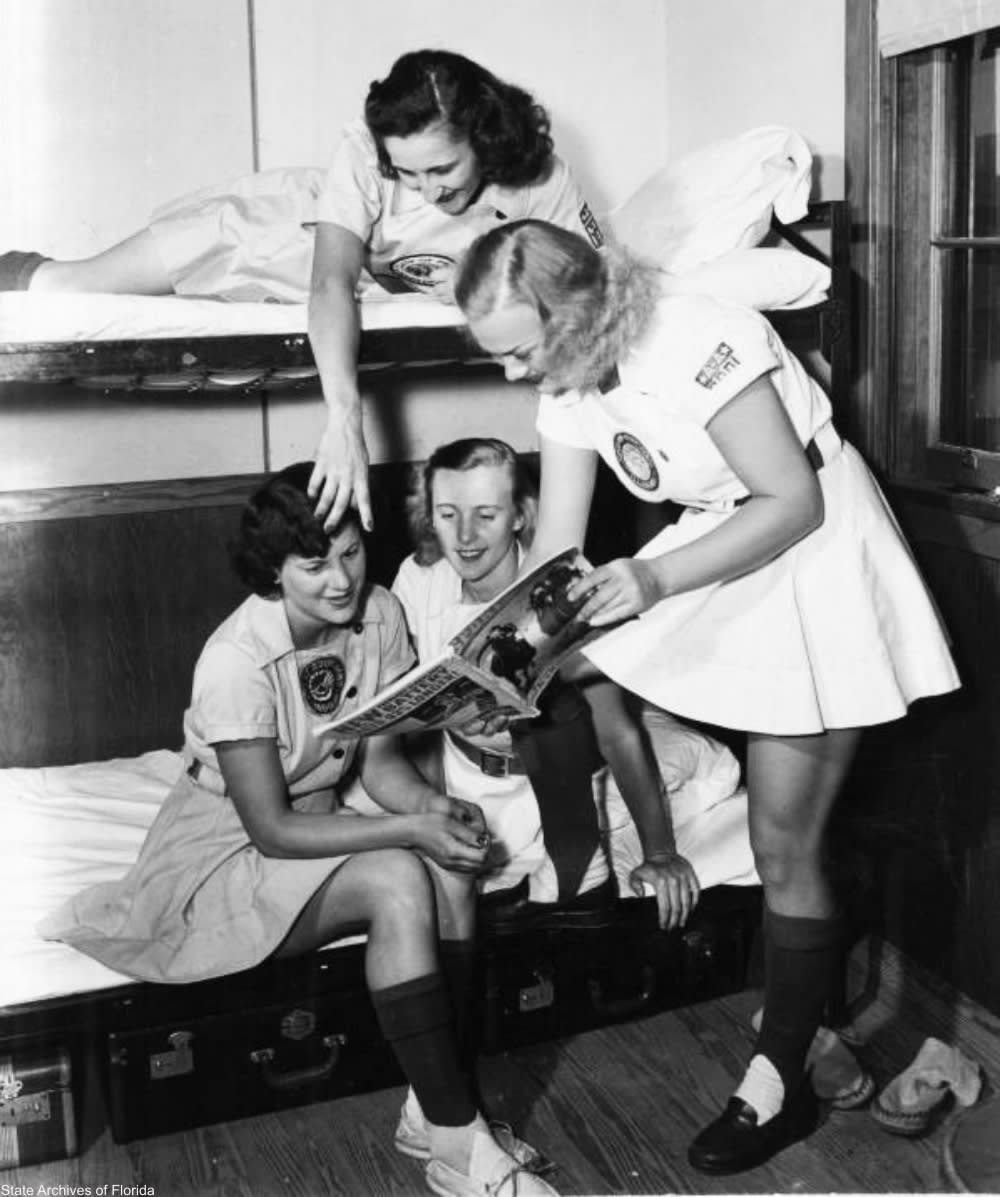 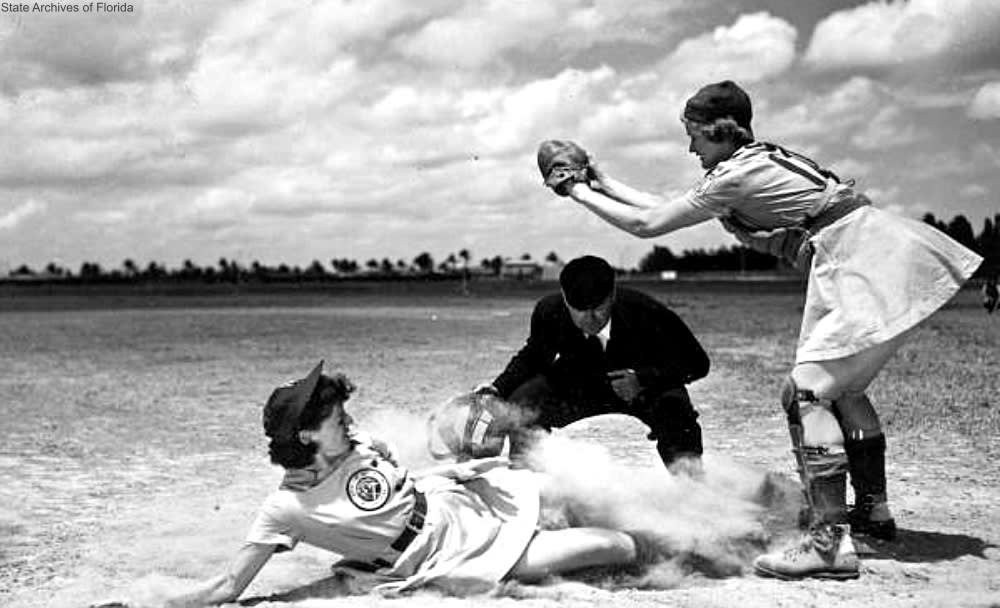 Marge Callahan sliding into home base. Photo via/ State Archives of Florida

In 1943 the answer seemed clear: women’s softball. The All-American Girls Softball League was created with Wrigley serving as a board member. It was only after some debate about whether a softball league could replace a baseball league that the name of the league was changed to reflect a more hybrid version of the game. The new name, the All-American Girls Professional Baseball League, would change again several times over the following decade. 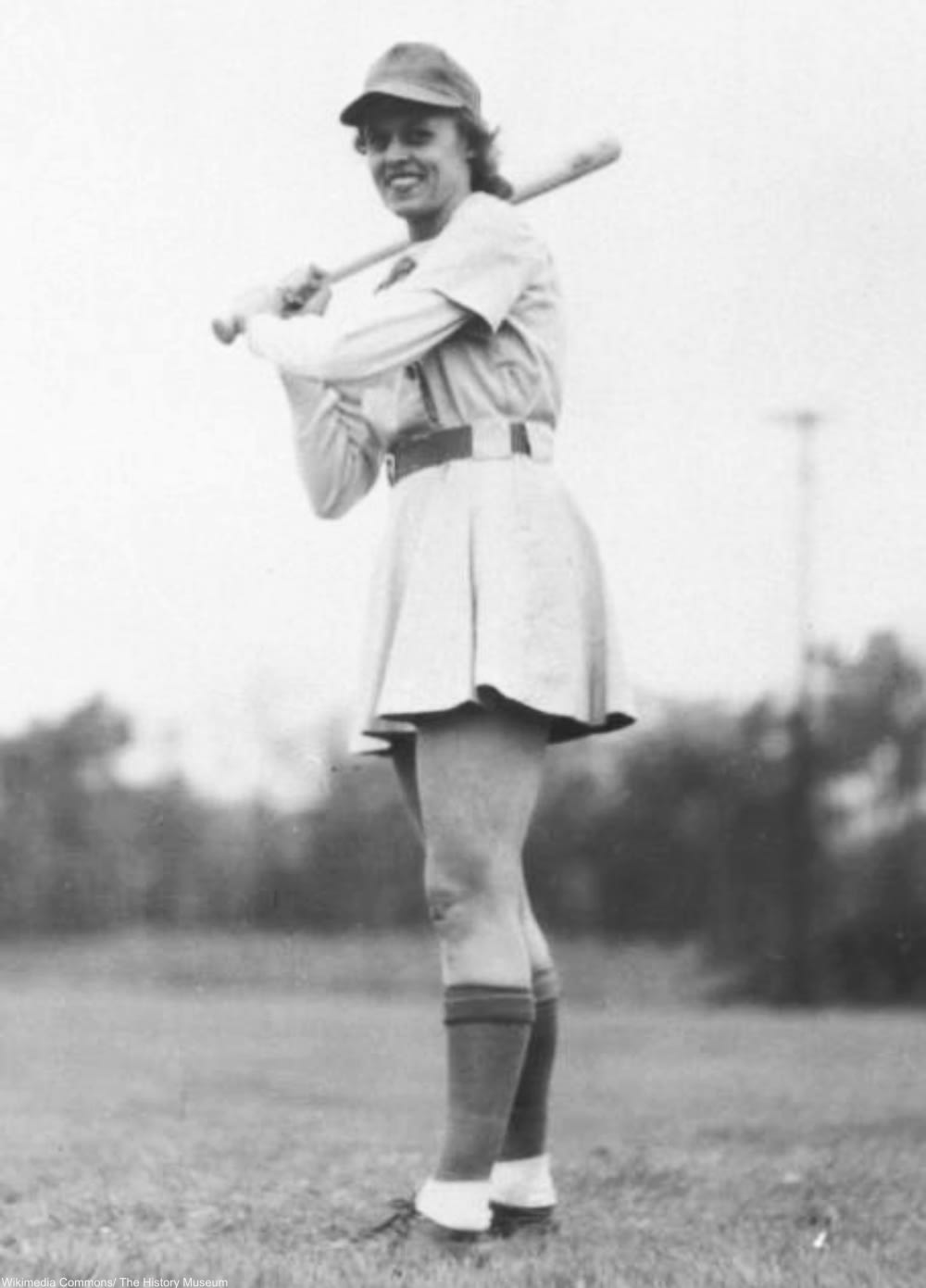 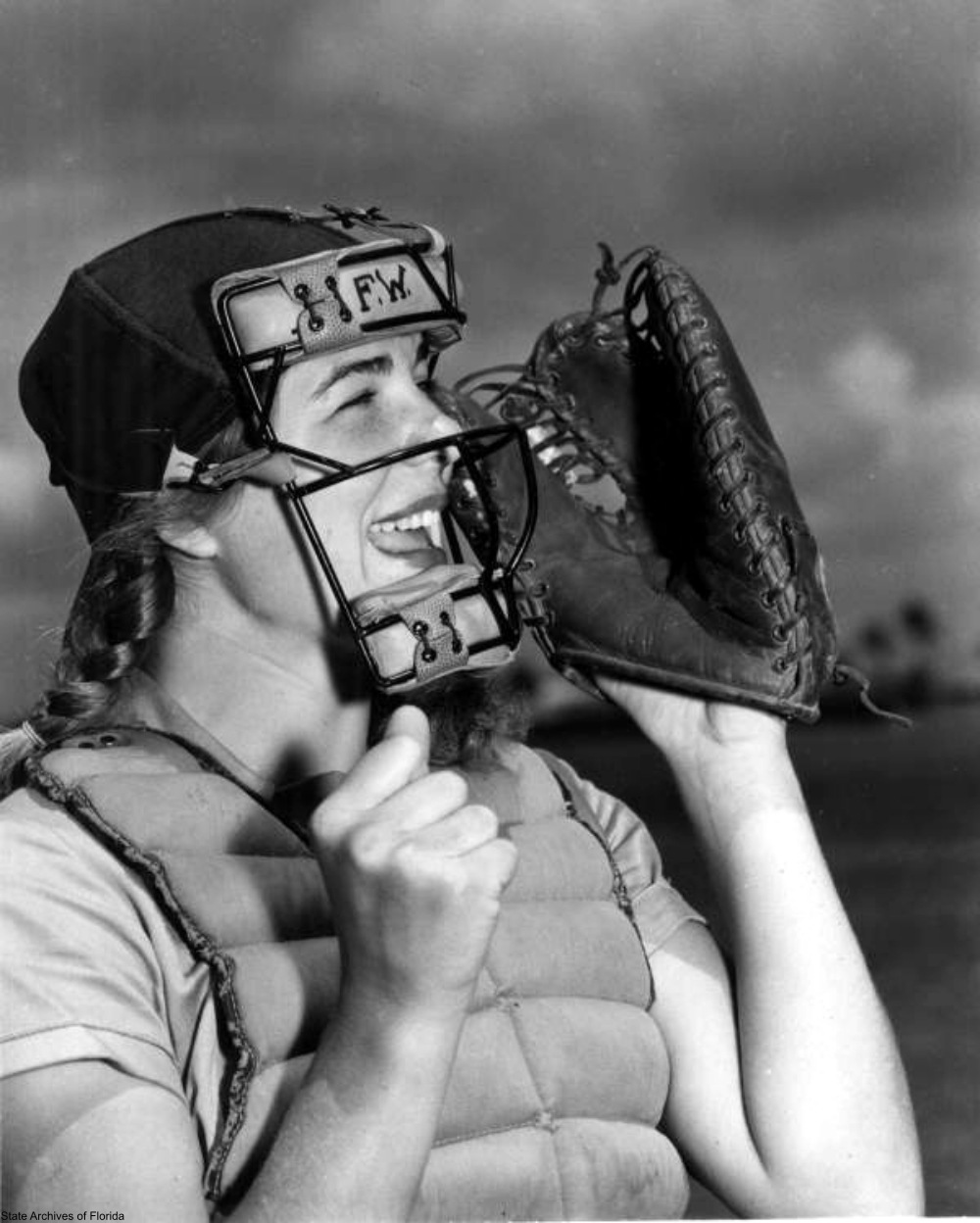 Dottie Schroeder in 1948 in FL Playing for the AAGBPL. Photo via/ State Archives of Florida

Scouts were sent all over North America in order to find the most promising players. Sometimes dozens of girls would compete for one or two spots during a tryout, according to Dottie Schroeder, one of the most well-loved and certainly the longest-playing team member in the league.

By 1944, with two failed teams, Wrigley had sold the league to Arthur Meyerhoff. Under new direction, the league saw attendance numbers slowly increase. Meyerhoff, one of the premiere advertising executives of the 20th century, saw more potential in the league than did Wrigley. 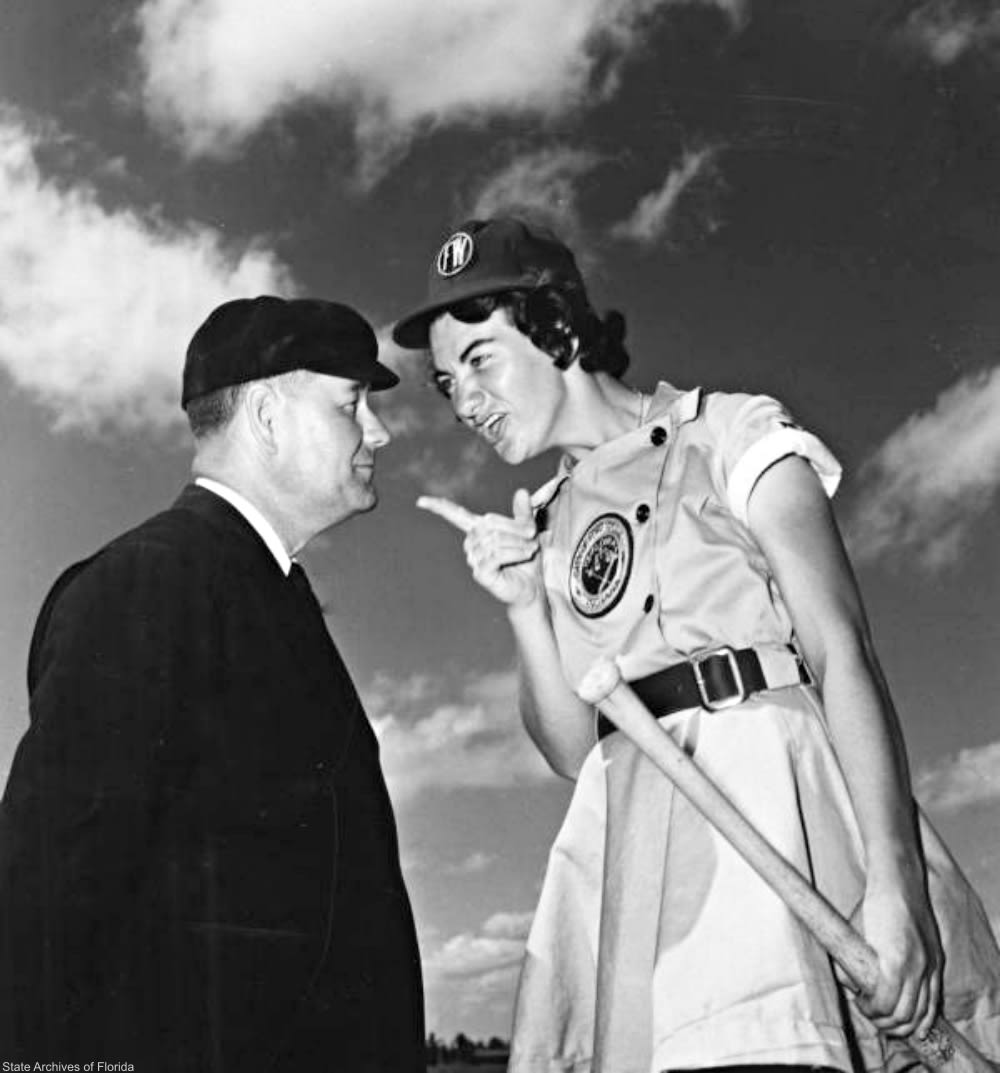 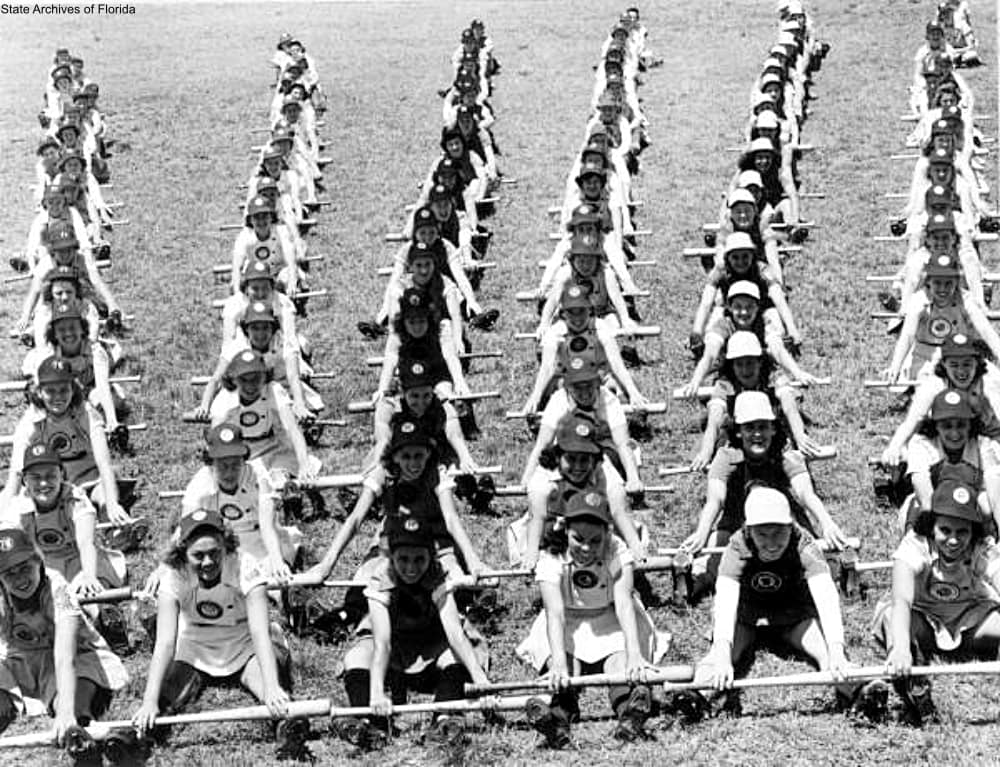 With a mixture of rules and guidelines from both baseball and softball, this new league for women sought talent amongst the many baseball and softball players of the day. The rules were changed each season, in an attempt to bring the women’s game closer to the regulations of men’s baseball. From 1943 to 1954, the size of the ball steadily shrank, while the base path and pitching distances steadily increased. 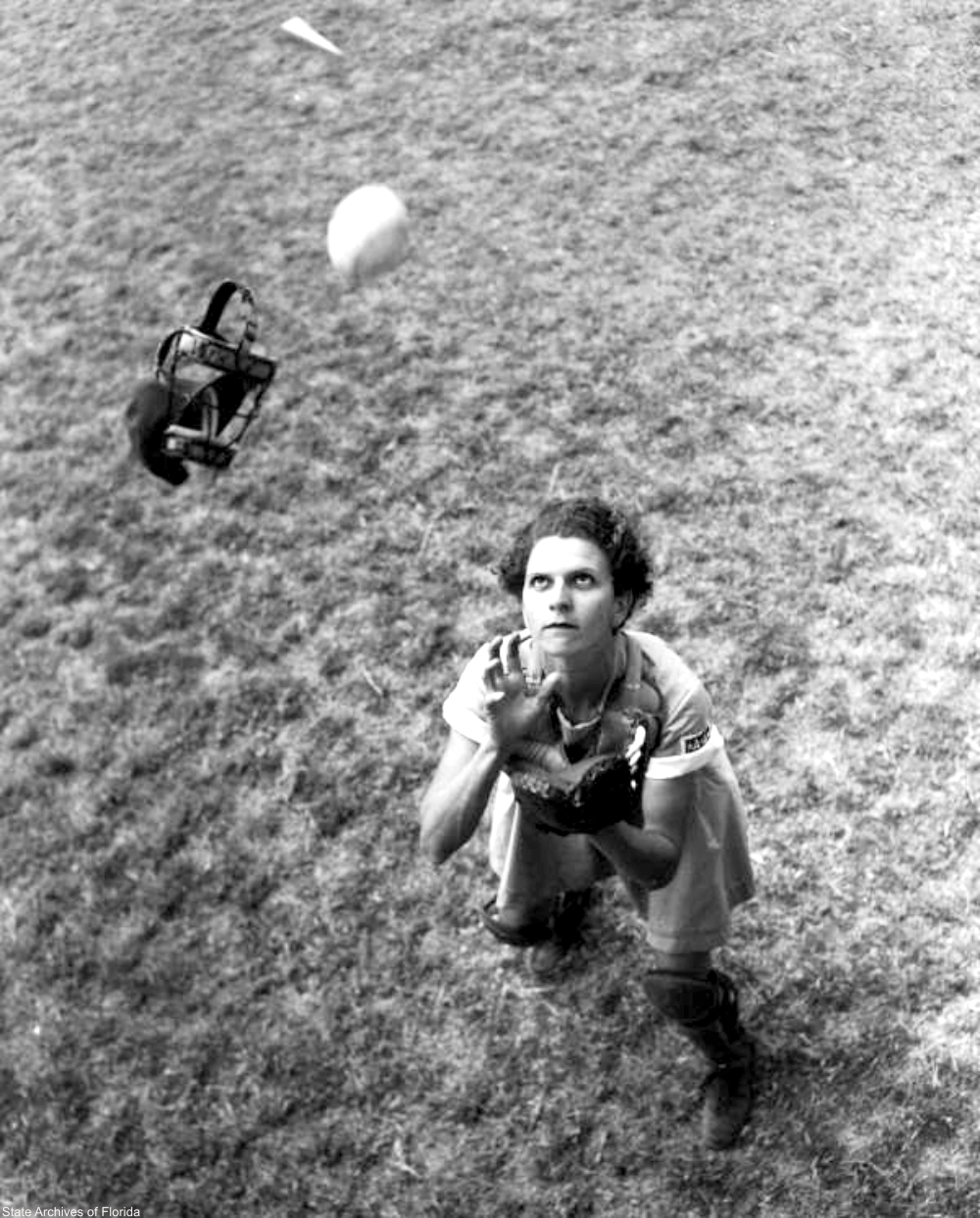 Team names like “Peaches” or “Daisies” and short skirts made it clear that one of the main attractions of this new league was the novelty of femininity in the game. Slides to hit home were more injurious than if the “girls” had been wearing pants, proving just exactly how tough these ladies really were. At the same time, the expectation by the team owners was that the women would have copious charms, manners, and delicate feminine grace. 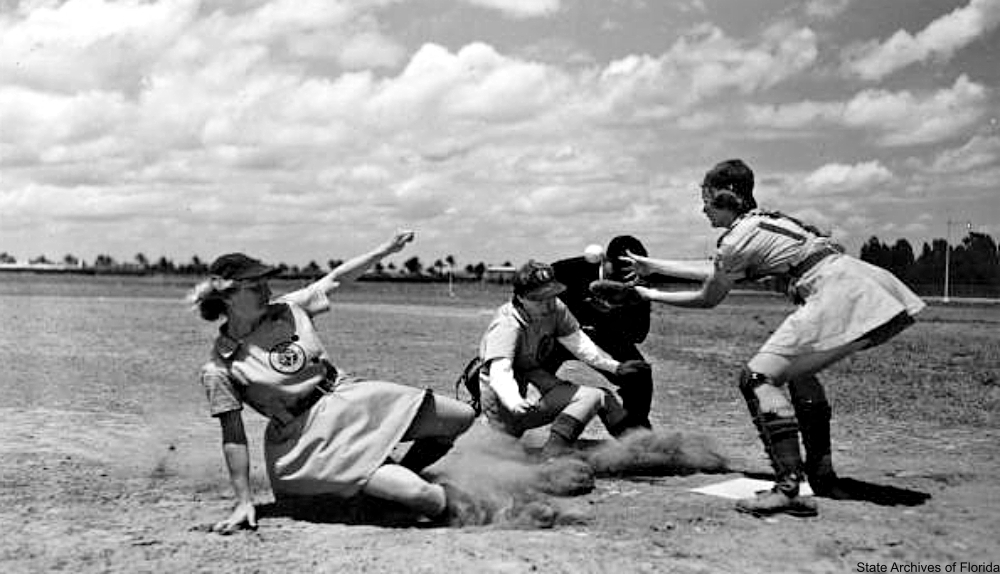 The players were expected to “look like ladies and play like men” which was no easy task. From the guide provided to the players we learn what that sentiment means in terms of beauty and demeanor: “It is most desirable in your own interests, that of your teammates and fellow players, as well as from the standpoint of the public relations of the league, that each girl be at all times presentable and attractive, whether on the playing field or at leisure.” 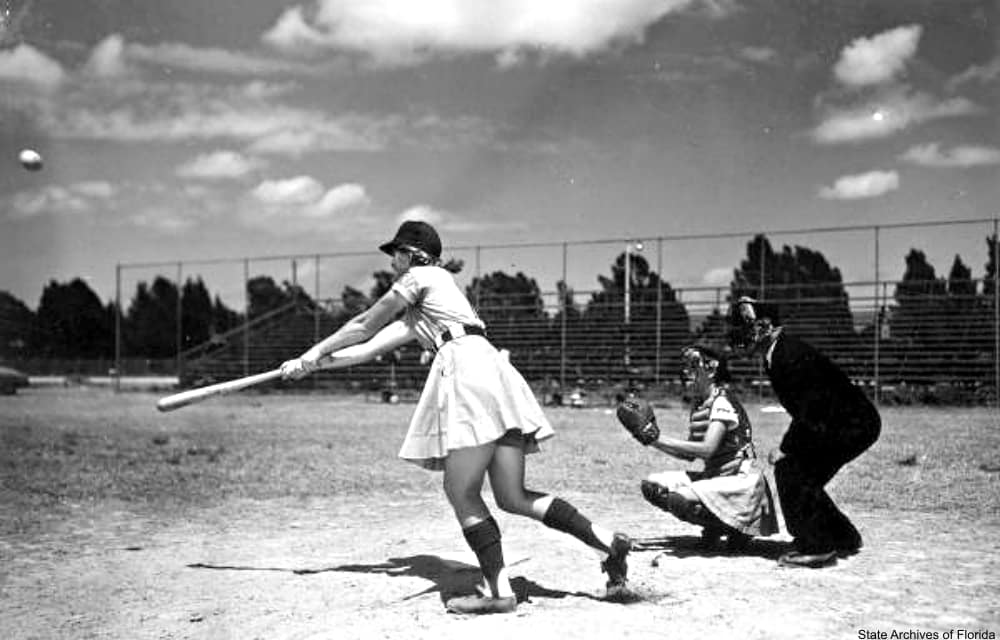 Dottie Schroeder at the bat. Photo via/ State Archives of Florida

The number of teams grew from four to ten, and they played all over the country. Surprisingly, the league continued even after WWII ended, with the best-attended game in the summer of 1948. The final season was played in 1954, as the management became fragmented, marketing became ineffective, and funds had dried up due to dwindling interest and an increased amount of TV-watching across America.

Here is a wonderful clip from the height of the league. You can see more of Dottie Schroeder and the other girls posing and playing in this rare footage!

It’s wonderful that the film A League of Their Own was made and we love the little details of the girls’ mannerisms and playing styles (many of which were based on theactual players). But, even today, this piece of World War II history often goes unnoticed. These girls had grit and style: a rarity in any sport. They did baseball proud and we will always remember these amazing players.

Check out the real Rosie the Riveters in color: Click “Next Page” below!