The patent for the telephone, filed in 1876 by Alexander Graham Bell, completely changed the world. It wasn’t long before telephones were a common sight in offices and in some homes. But, late in life the inquisitive inventor would seek out another interesting project with which to experiment: human flight.

Unlike his contemporaries in this field Bell was concerned primarily with tetrahedral wings. The results of these unusually shaped kites and hang gliders were visually stunning – if not viable for actual flight. 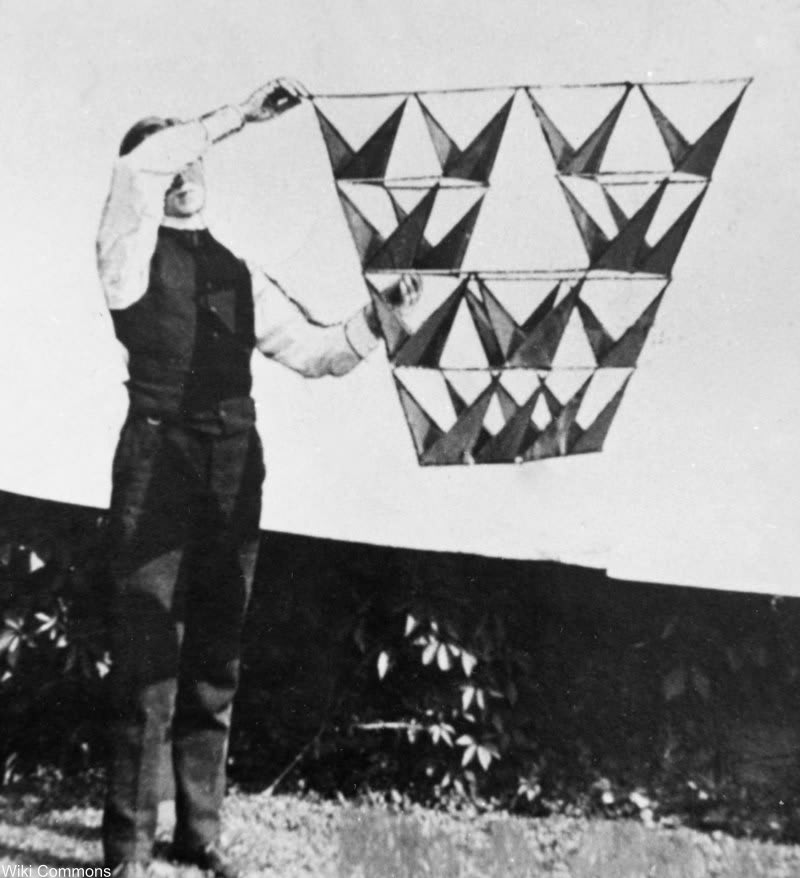 Bell began experimenting with the unique shapes of tetrahedral kites and the science of aerodynamics around 1898 – and he continued until about 1912 by which point airplanes were well on their way to becoming the flight machine of choice.

As early as 1892, Bell was writing on how human flight would change the future of humankind. However, Bell at first envisioned a hovering, steam-powered aircraft which would be anchored via rope, not unlike an ocean-going vessel!

Bell later became consumed with the best shapes for wings and the box-shaped kites of Laurence Hargrave grabbed his attention. The kites became more and more elaborate as Bell introduced tetrahedral shapes into the designs. Tetrahedral shapes, those with four sides, can be configured in a vast array of patterns. This geometry resulted in some simply beautiful kites designed by Bell. 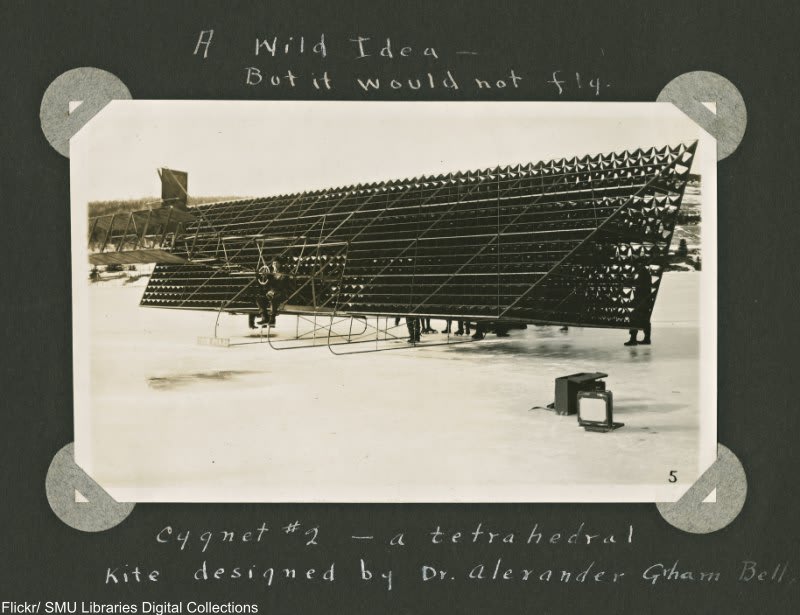 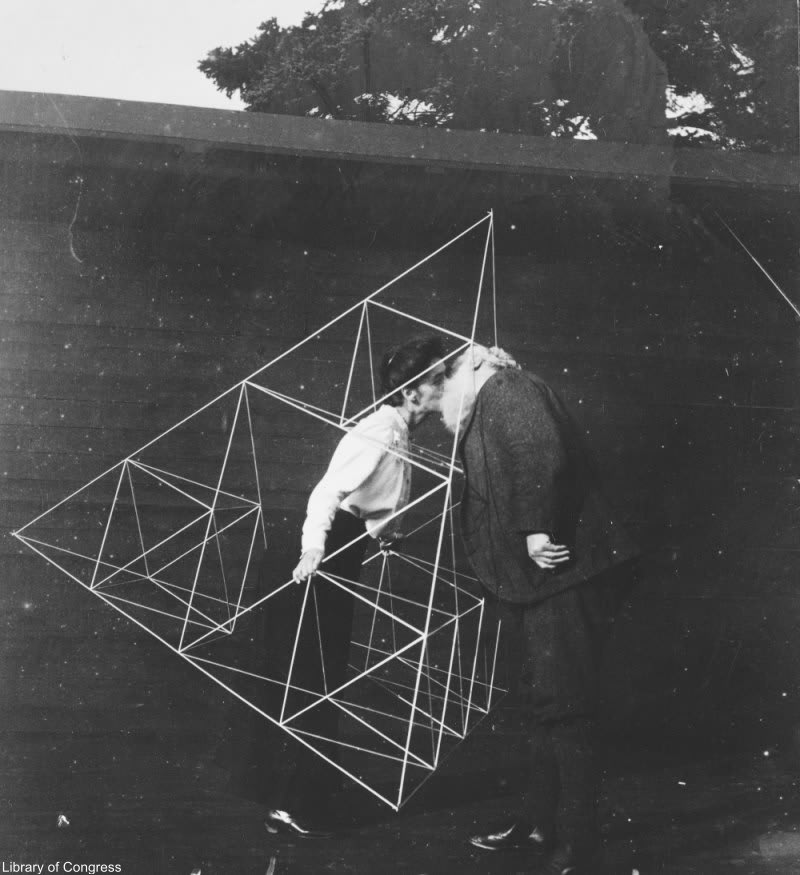 Bell and his wife, Mabel, kissing through the frame of one of his tetrahedron kites in 1903. Mabel was a enthusiastic supported of her husband’s scientific endeavors. Via/ Library of Congress 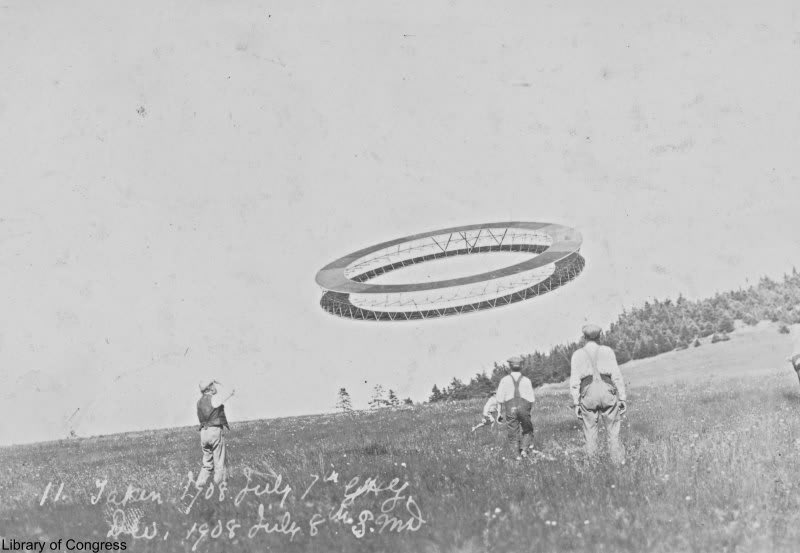 This kite is almost UFO-like. Via/ Library of Congress

The shapes of the kites are truly mesmerizing and they got bigger and bigger as Bell continued on his quest to find the best designs for flight. Made of silk and sewn by hand, Bell intended that eventually these kites would carry the weight of a human, which they sometimes did in experiments. However nothing would out-do the future efficiency, power, speed, and relative hardiness of early airplanes. 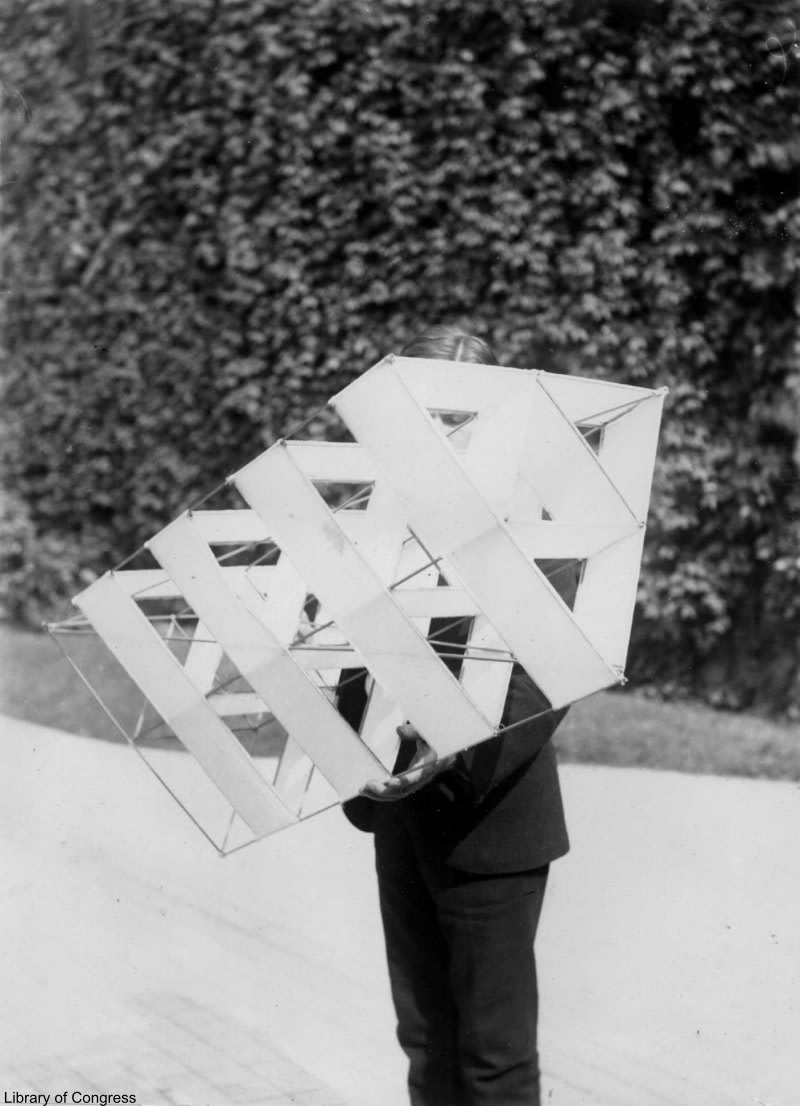 Much of Bell’s work with the tetrahedral kites took place at his Nova Scotia home of Beinn Bhreagh, where he would sit surrounded by his grandkids on the porch, observing his assistants flying the crafts, before taking notes in his journals. 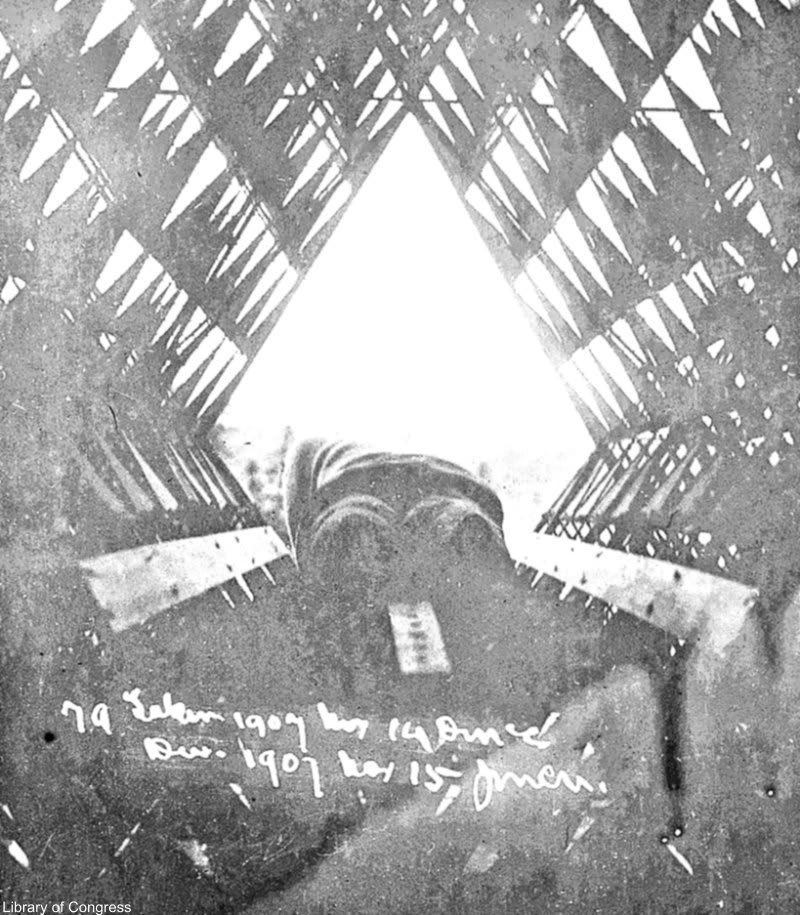 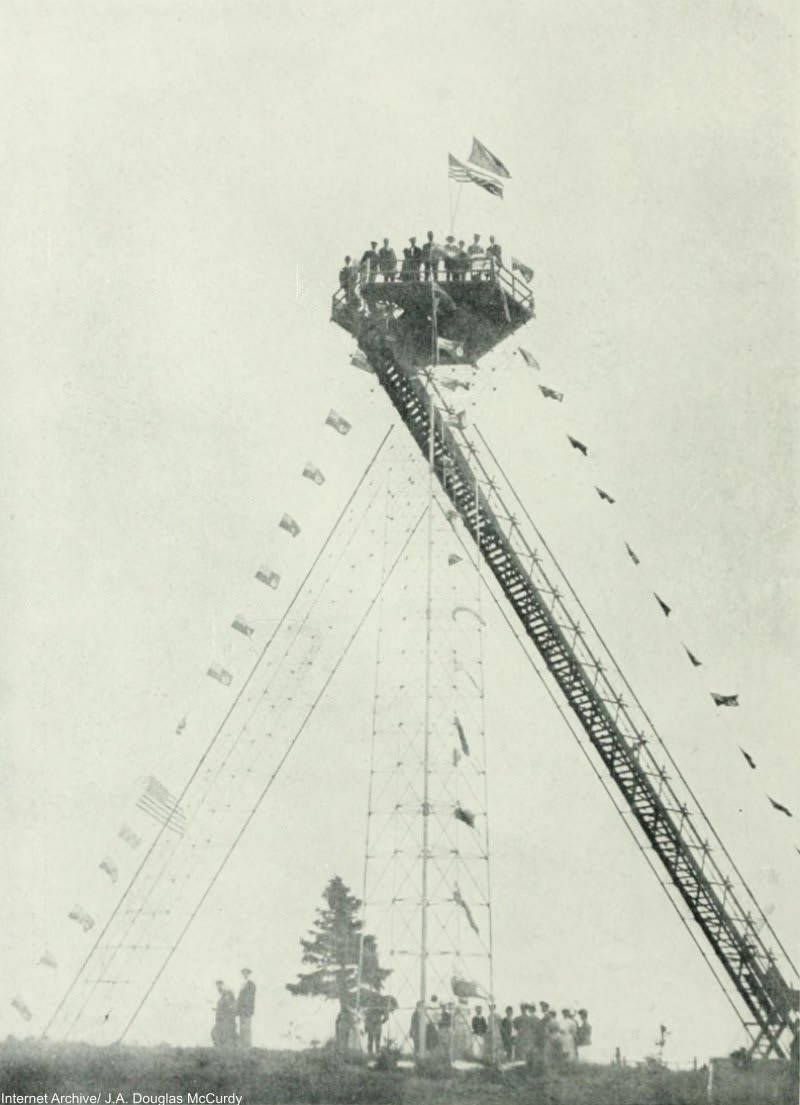 Bell was also interested in tetrahedral shapes and forms for the their strength, as seen in the observation tower (above) he built at Beinn Bhreagh which loomed 80 feet high and was said to be extremely strong due to how it was constructed. 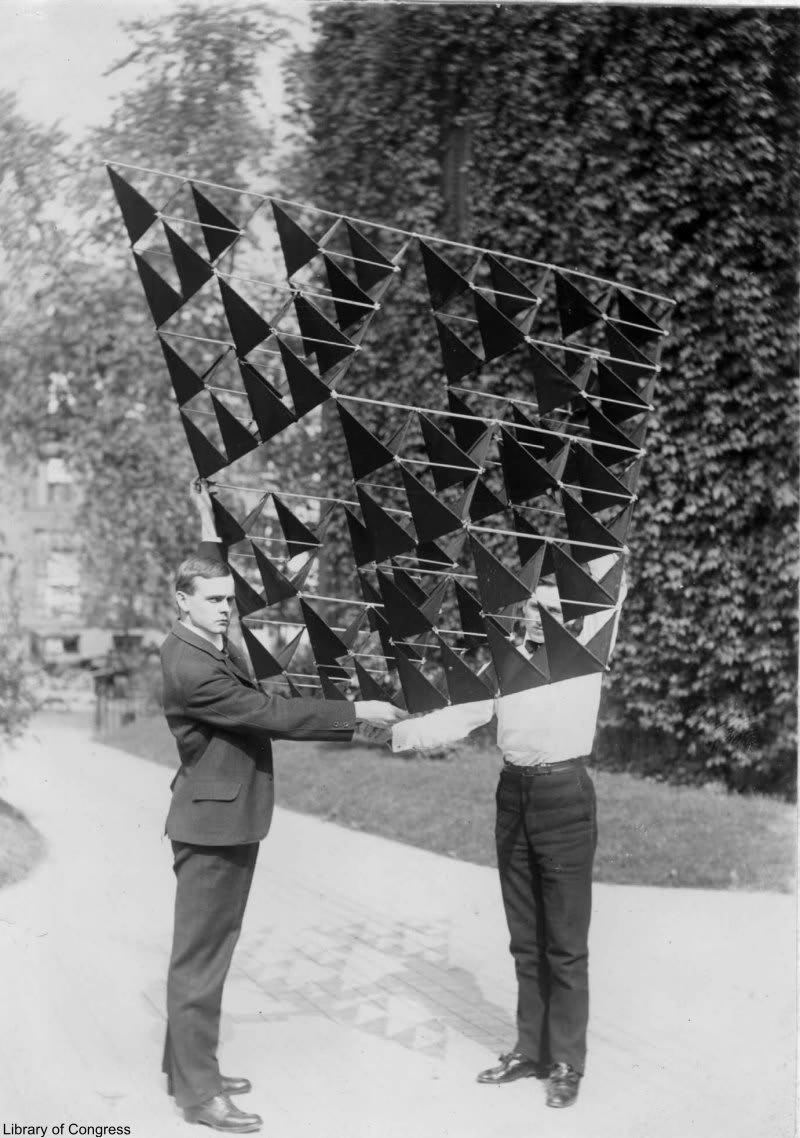 Though little of his work on human flight made an impact to the development of airplanes, the results of Bell’s work are still inspiring to kite designers today. They may not have worked as hang gliders or planes, but as kites Bell’s designs are intriguingly beautiful.