6 Decorating Styles Which Were Wildly Popular in the 1950s

With the resurgence of Mid-century modern, the 1950s can get typecast as being all about boomerang-shaped coffee tables and hairpin legs. While those styles definitely had a strong presence during the decade, there were many decorating styles that existed right along side each other, often in the same room even. Here are 6 of the most common during the decade. 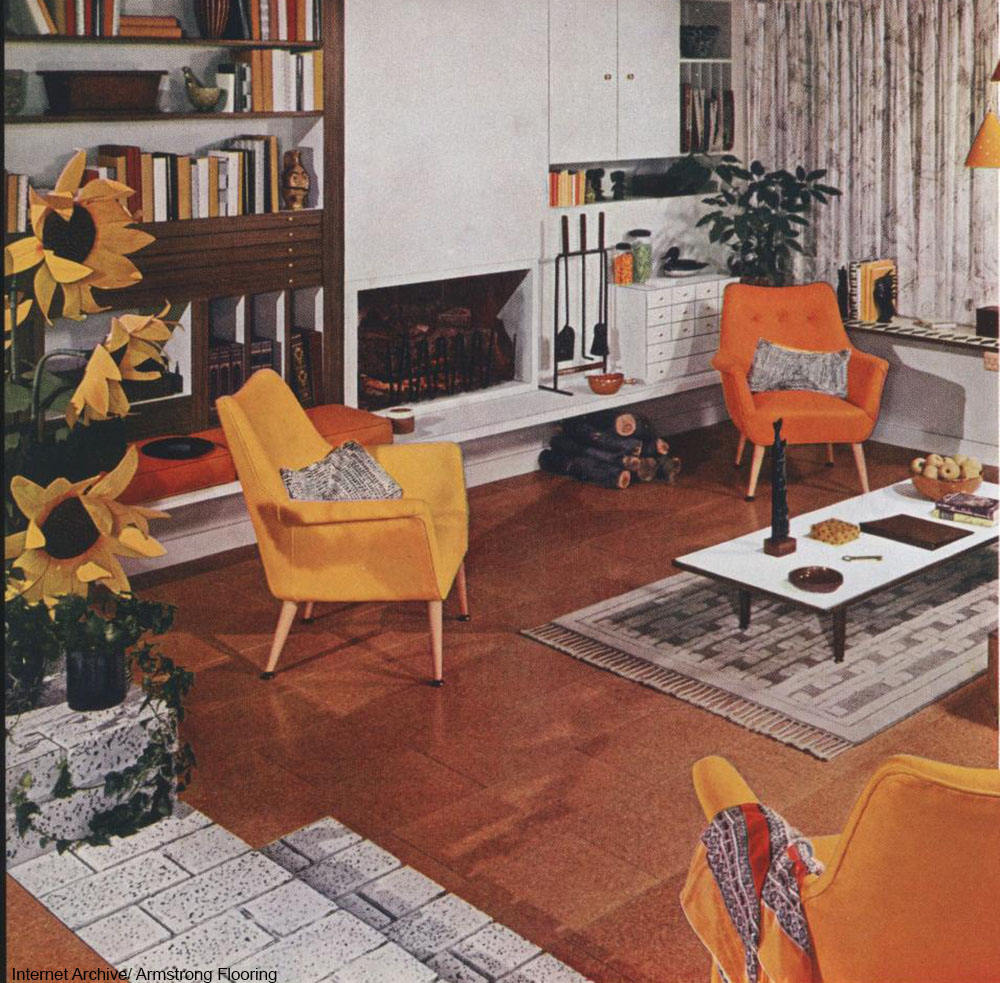 Cape Cod style homes, kitted with knotty pine and spindle-back chairs were one of the new styles that post-war families were rushing to move into in the early 1950s. The homey feel was centered around lots of wood in the form of furniture, lapped walls, paneling, faux wood finishes, and fabrics that went well with wood tones (like chunky burlap and plaid). 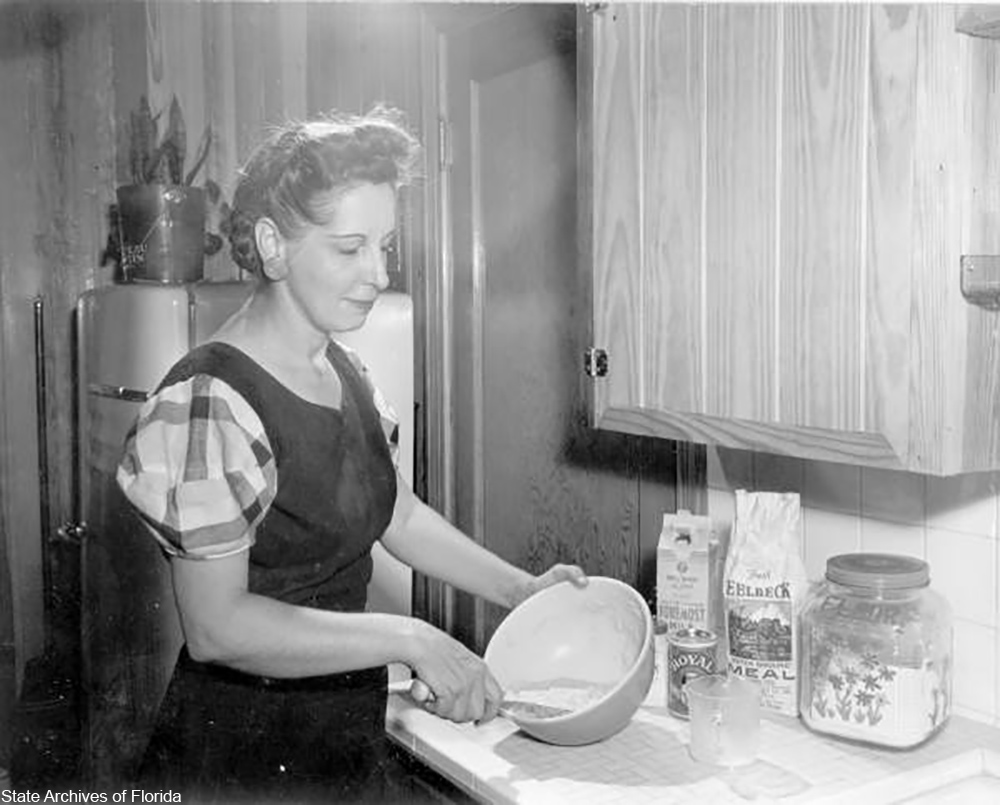 We might think of this style as 1930s and it certainly has its roots in that decade. But, Streamline continued in the 1950s with sleek chrome accents in the kitchen and furniture lines like Heywood-Wakefield. This style not only embraced simple lines, but also highlighted mechanical shapes and details.

The increasing reliance on machines to complete the home made for many opportunities to incorporate this type of design into decor. 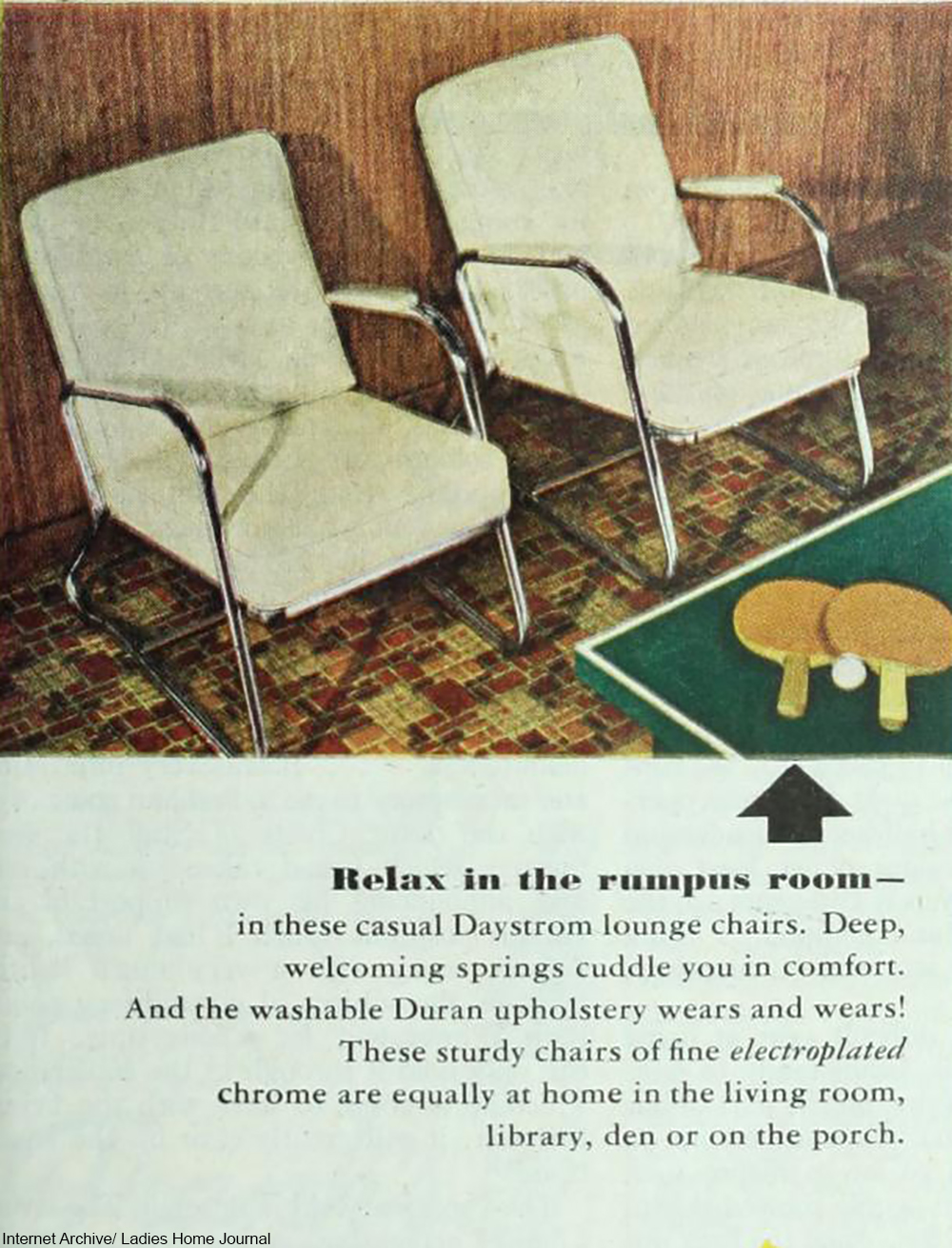 The aforementioned formica coffee table shaped like a boomerang is just one example of how the public embraced now high tech materials. It was the age of the atomic bomb and what followed soon after was the space age.

Flying saucer shapes, inspired by the UFO sighting in 1947 at Rosewell and other places, could be found in lamps and other household goods. Starburst clocks represented the promise of atomic energy. And, Sputnik-shaped light fixtures captured the excitement of space travel. 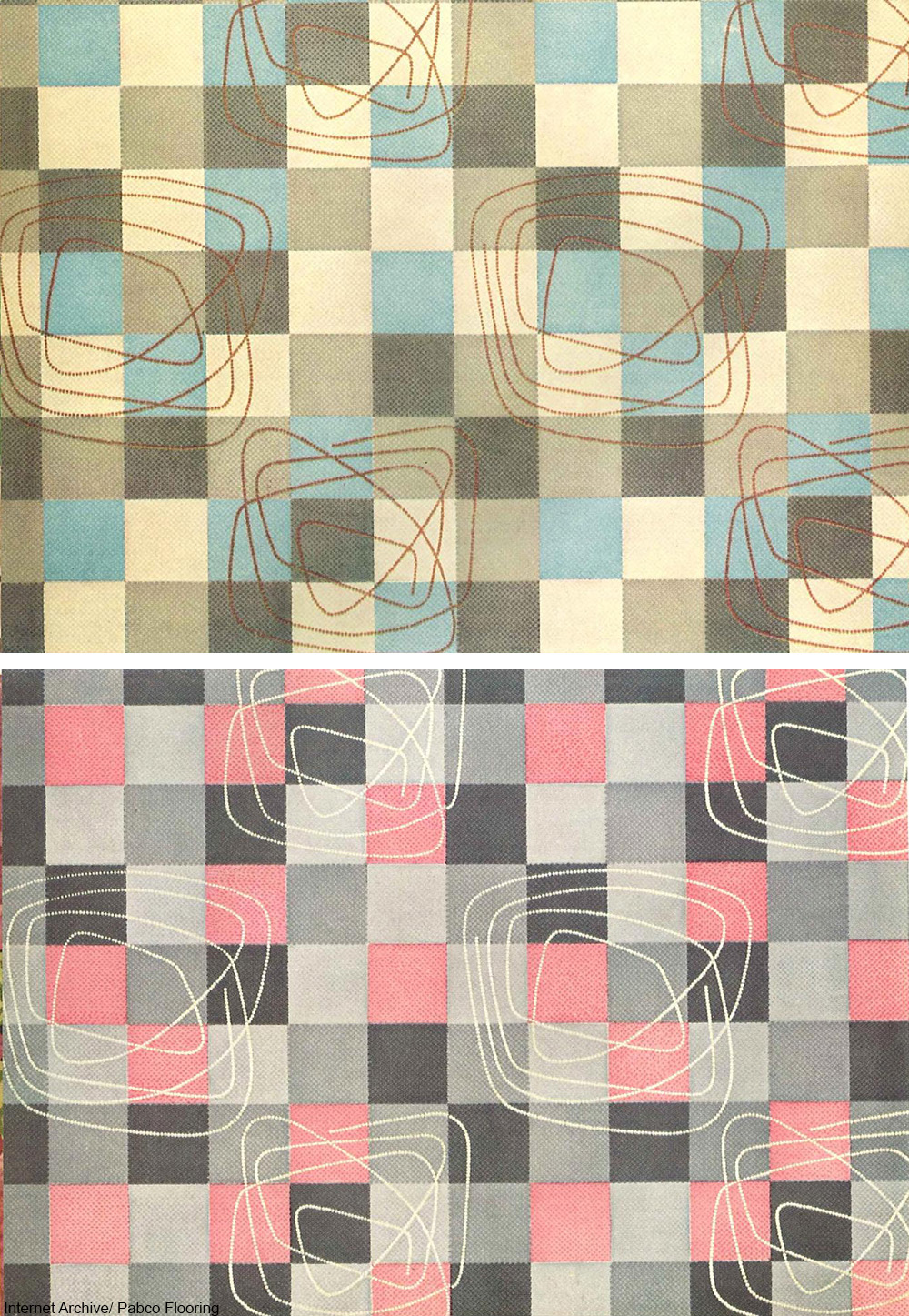 After First Lady Mamie Eisenhower declared that her favorite color was pink and that she found it a very feminine color, many women went out and bought everything pink one could imagine. Pink kitchens, pink bathrooms, and other Pepto-Bismal colored rooms soon became as normal as any other design scheme.

The colors that went well with pink, usually other pastels, also came back into vogue. The pastel tiles of the 1930s and Jadeite pieces of the 1940s combined nicely with the surge in pink colors. 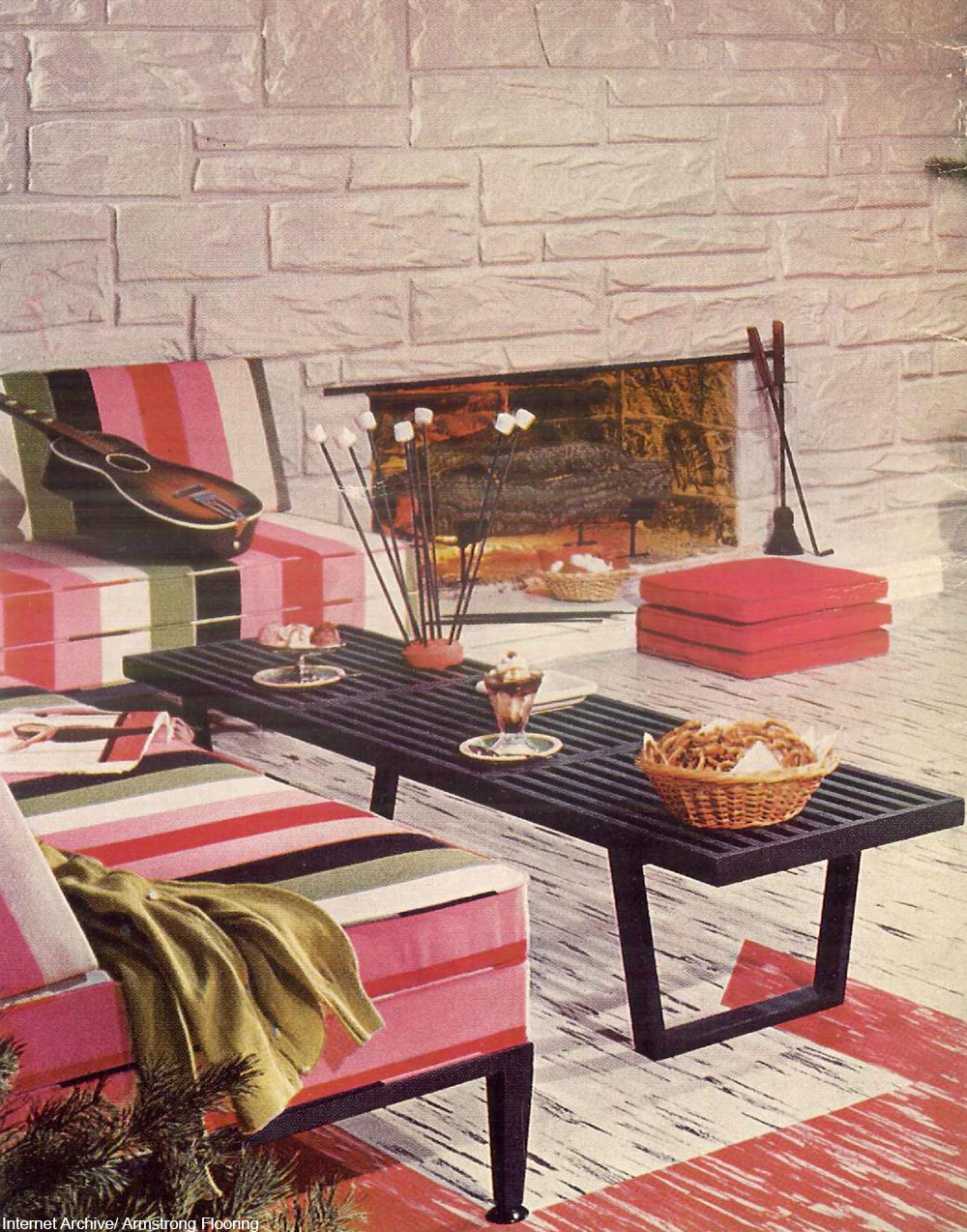 1950s designers like Harry Bertoia, Charles and Ray Eames, Eero Saarinen, Herman Miller, and Florence Knoll epitomized the Mid-century Modern look. The molded chairs of different materials made by each of the above are still in production today and their classic look is unrivaled for creating retro decor today.

The creative use of metal rod, fiberglass, plywood, polyurethane foam, and plastics made these styles feel incredibly modern and fresh to homeowners who had been used to carved wood and overstuffed, horsehair-filled armchairs. 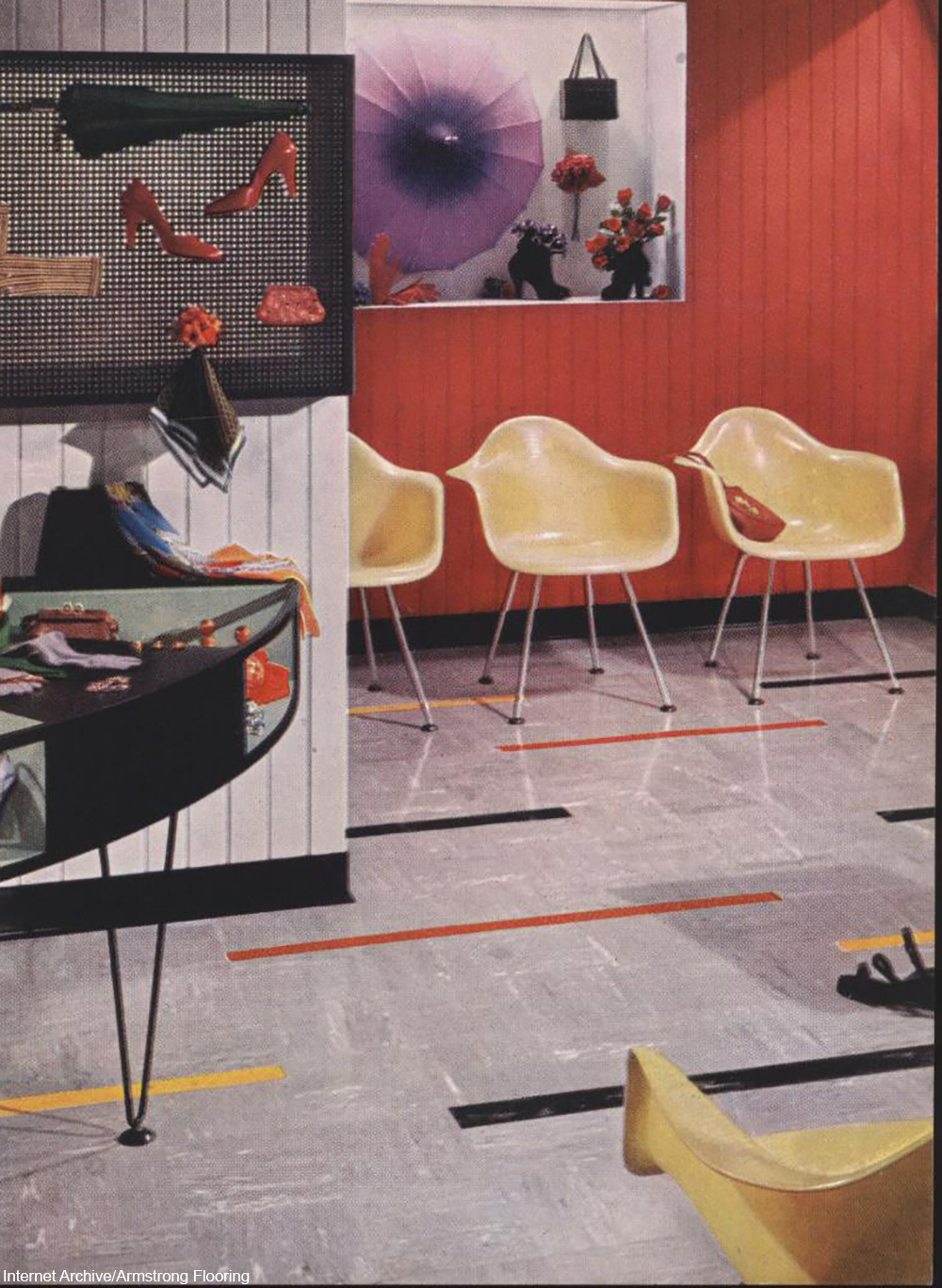 Last but not least is the eclectic look which veered modern, but combined bits from each of the above styles to create a warm, but very modern, look. Two cohesive elements of this style are still found in decorating today: natural materials and plants. The exact proportions were flexible, leaving plenty of room to create a whole new look. Far from the polished showrooms of stiff couches and the matched sets of other 1950s styles, this type of decor was comparatively free and expressive.

Of course there are many ways to create an eclectic look, but some of these design features carried over into the 1960s when bohemian eclectic was popular with young people just starting to furnish their homes. 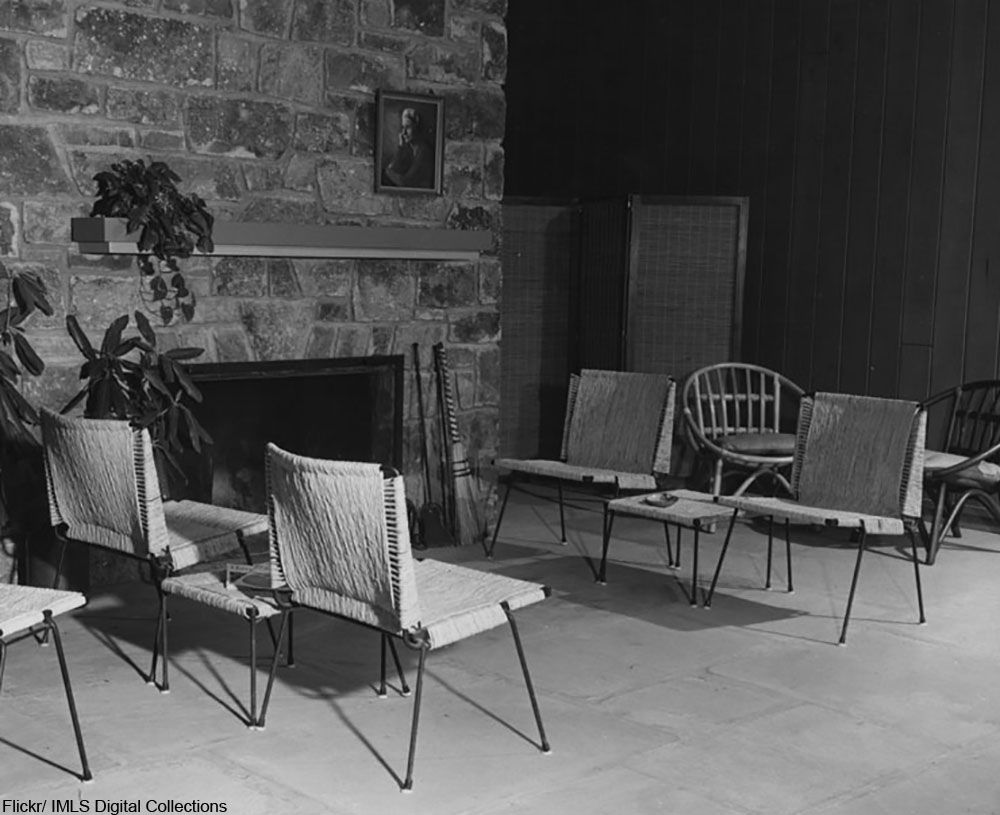