A Compendium of Fascinating Old Telephones

For more than a century the landline telephone was the fastest and easiest way to communicate. Starting with rudimentary numerical systems and telephone lines, the entire system had to be expanded upon exponentially with each decade as the home telephone grew from a niche piece of technology to a ubiquitous part of the household admin. Sadly, the beautiful and well-made phones many of us grew up using are now relics of another age, and the advent of touch tone technology means that even if you have a landline and plug in an old phone, you won’t be able to use it for all calls. However, these old workhorses are very interesting to look at and came in a huge variety of colors and designs. 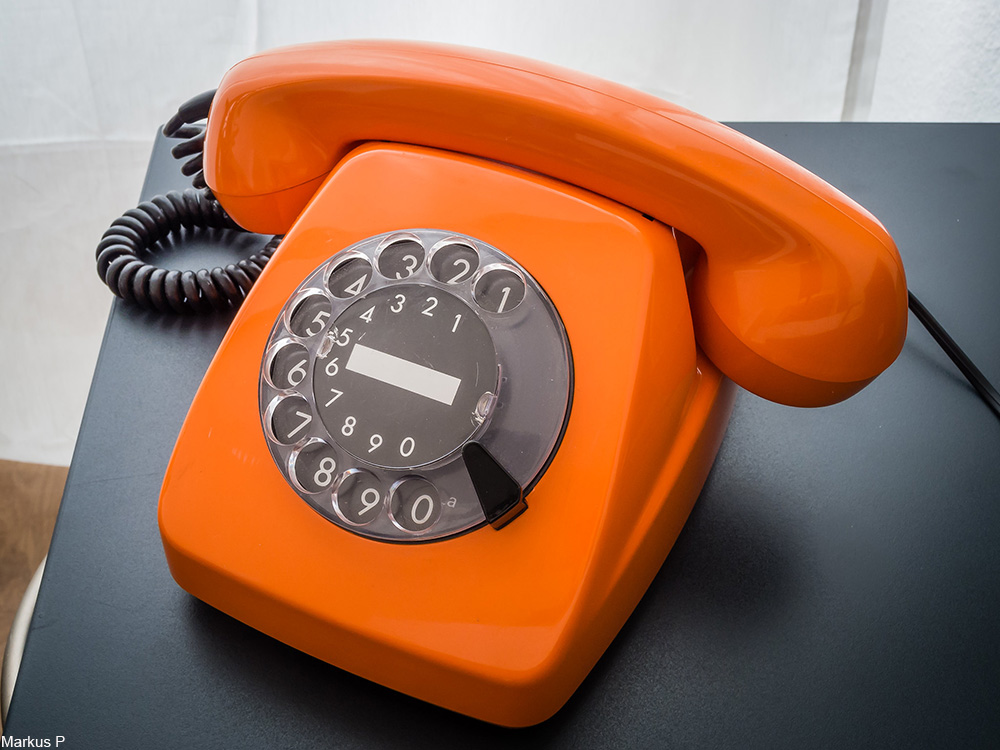 The Siemens FetAp 611-2a (above) was made in the 1970s and featured a smooth, integrated cradle for the headset. This model came in many colors and was mainly marketed in Europe. 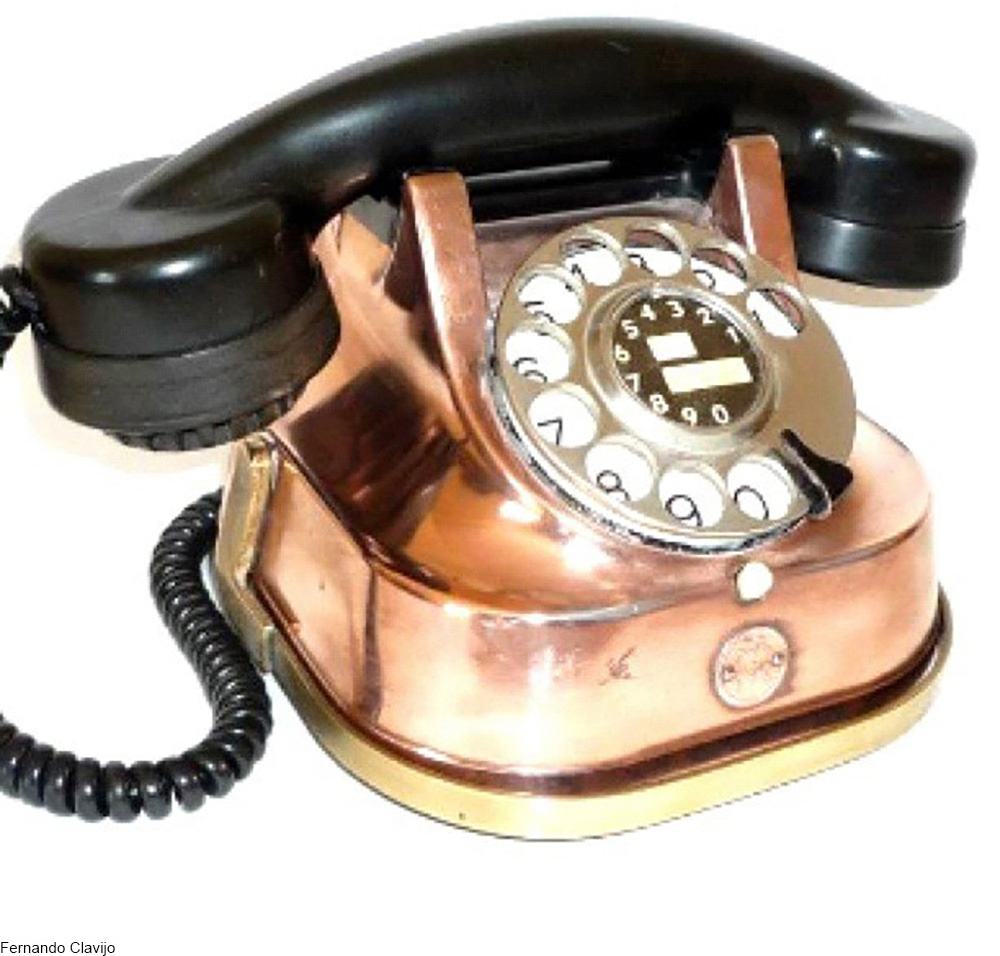 Imagine having a phone made from nickel, brass, copper, and plastic (or Bakelite) like the one above. How unique! 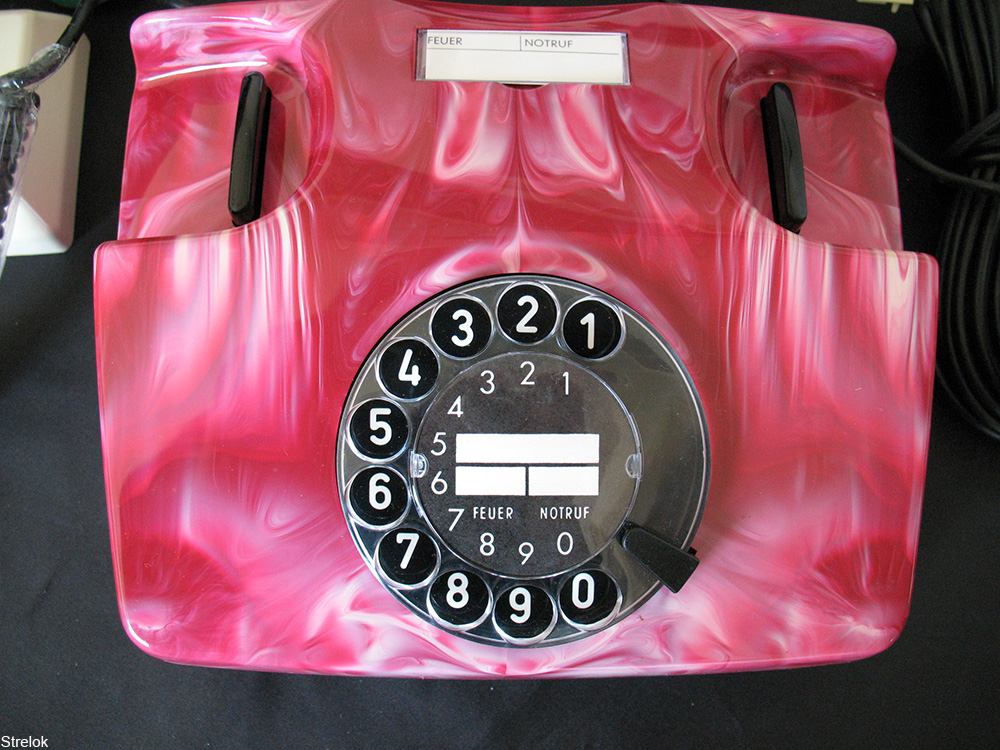 The phone above was made in a bowling ball swirl that was very uncommon for phones- which were usually made in solid colors only. 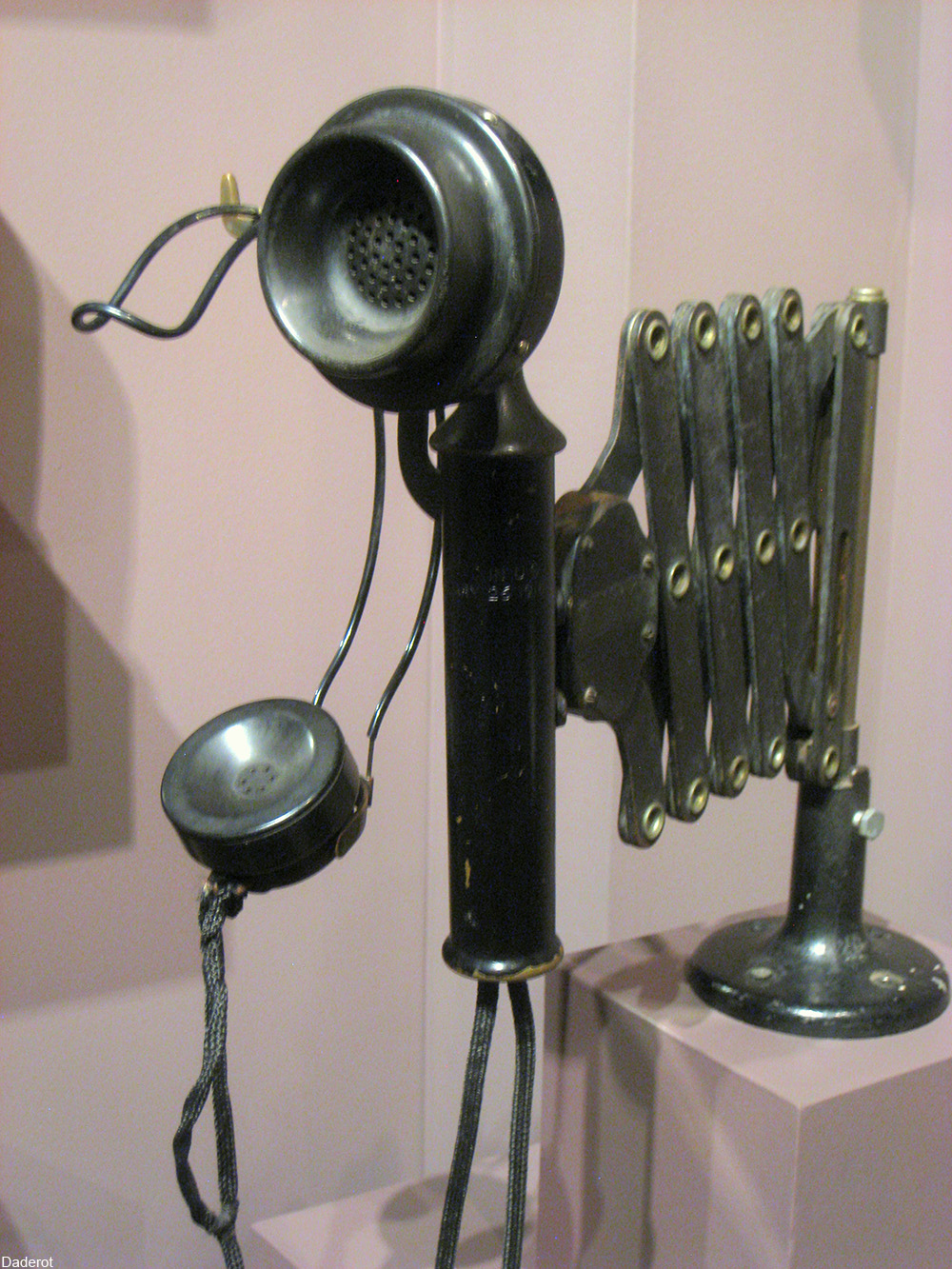 In the days when candlestick phones were the norm, the base unit remained fixed to the wall or sat on a desk. This made it hard to get comfortable or for people of differing heights to use the same phone. But, with this extendable model one could pull the unit towards them for a better phone experience. 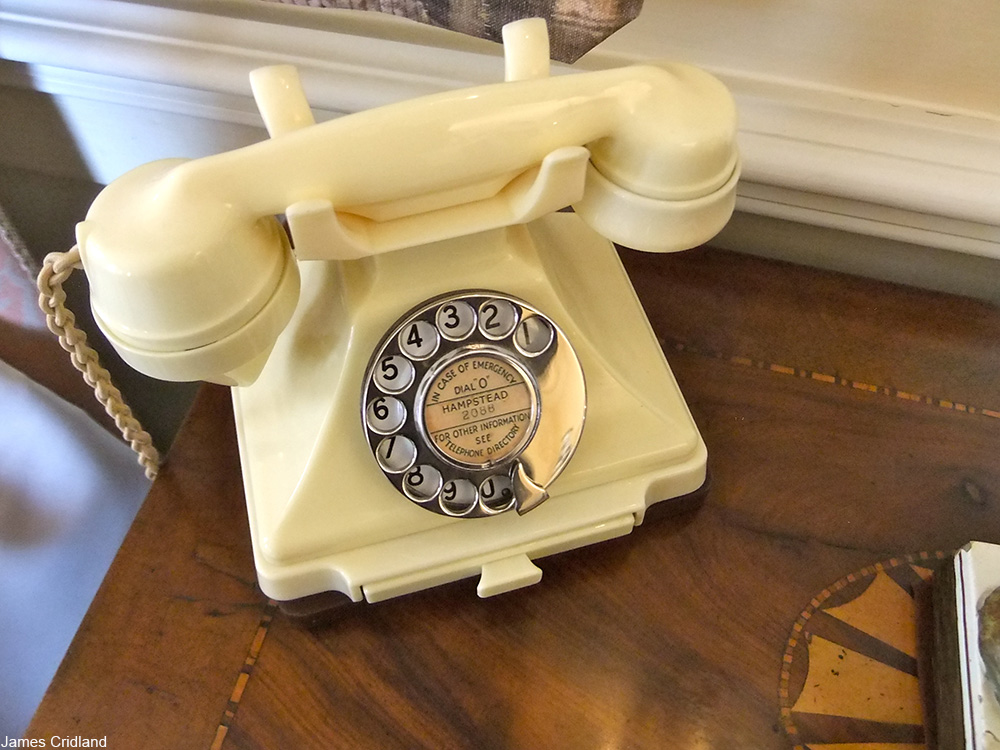 Like a lot of phones of the past, the cream model above has a convenient slide-out cheat sheet for important numbers. It really did save time from having to find one’s address book or searching the phone book. Alternately, you also could store tiny sheets of paper or a slim notepad in there for taking messages. How things have changed so much since then! 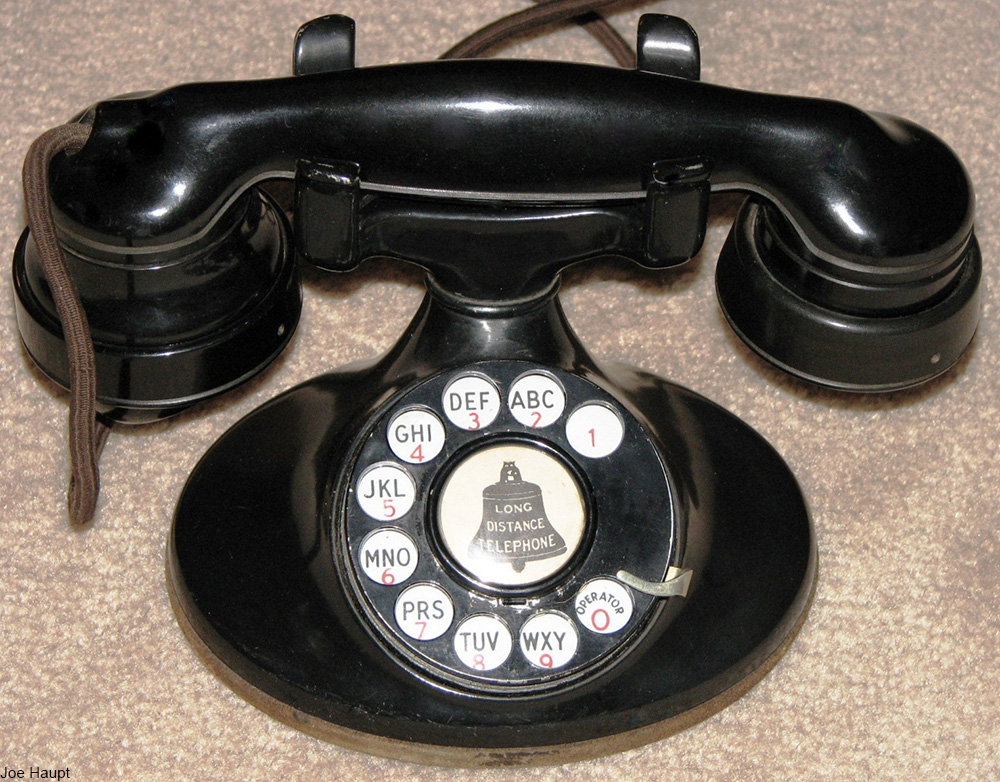 Some of the first non-candlestick models of telephones has extremely slender bases. This style was popular in the 1920s, though to be fair there wasn’t a lot of choice in phones back then since you could only buy or rent a phone from the servicer directly. Customers had to select from the limited range that any one phone company offered. 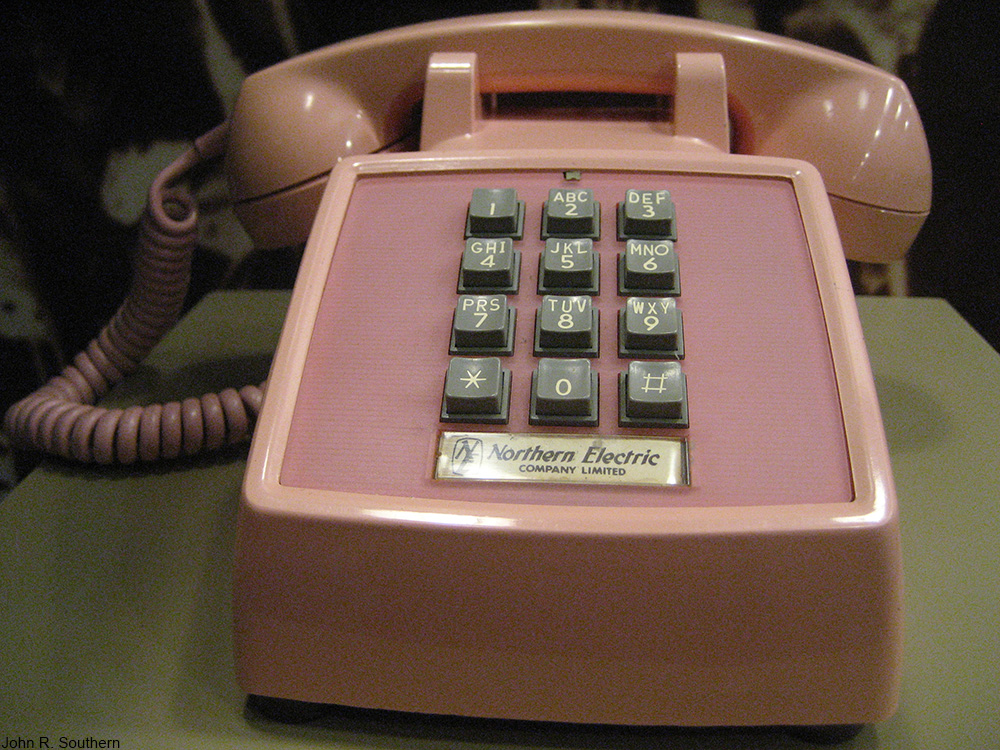 As phone service became the norm, phone companies began to offer a larger range of phones. Many companies still only had a few models, but offered them in an increasing number of colors to match any decor. 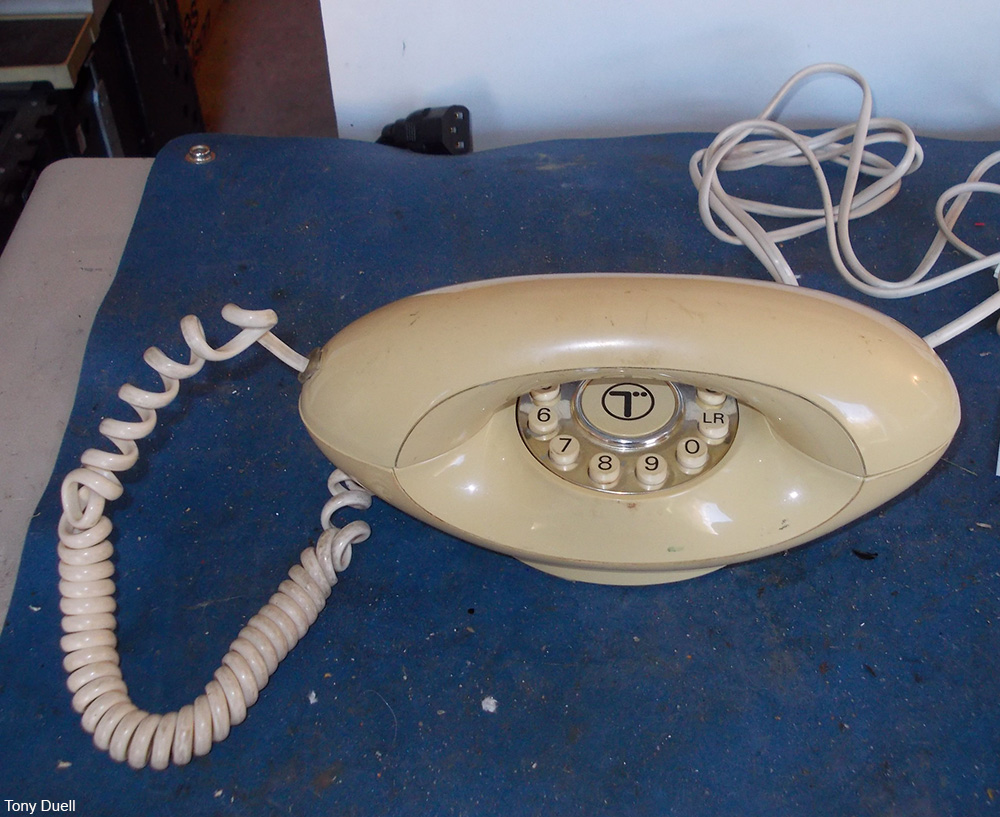 The 1970s saw a lot of new designs, like the genie telephone. This model was quite mod. 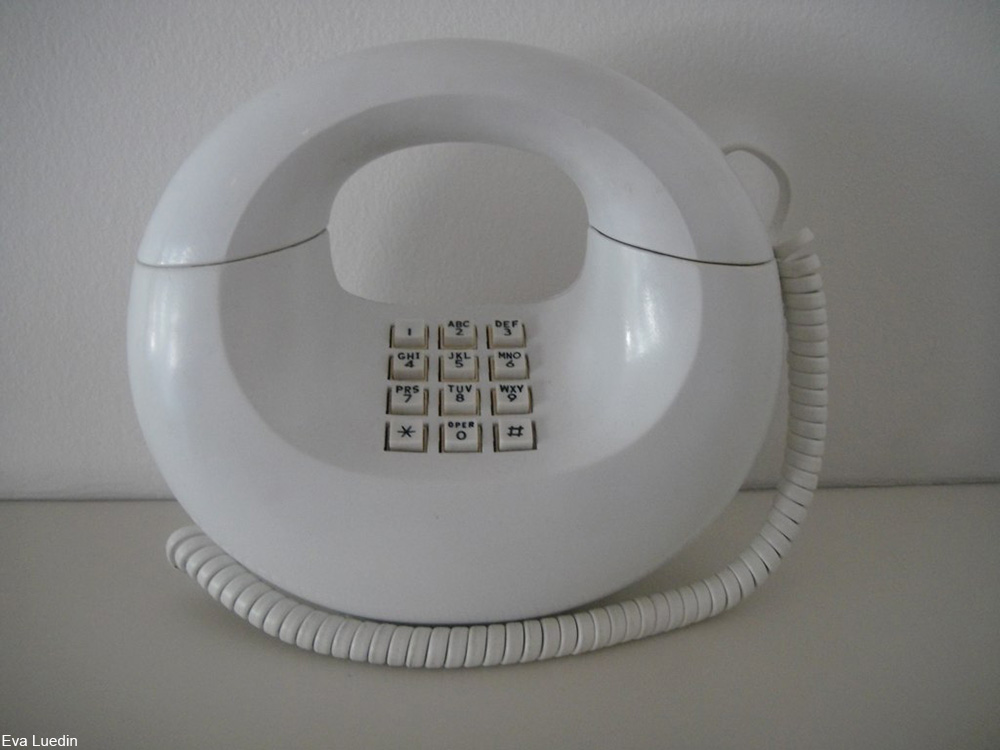 Later styles of this type of phone featured a larger size, more donut shape, and push-button numbers to simplify dialing. 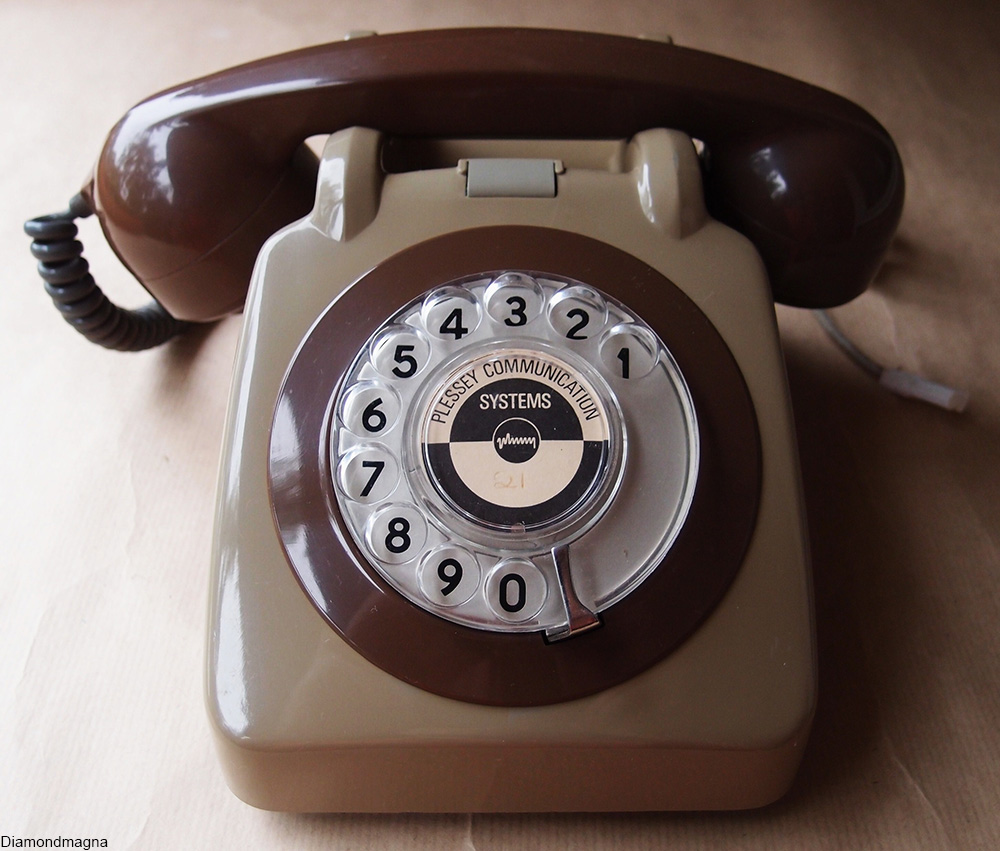 By the 1970s and 1980s, browns and tans had come to dominate the world of telephones because these colors matched much of the decor at the time. Can’t choose between the two? Have a two-tone phone! 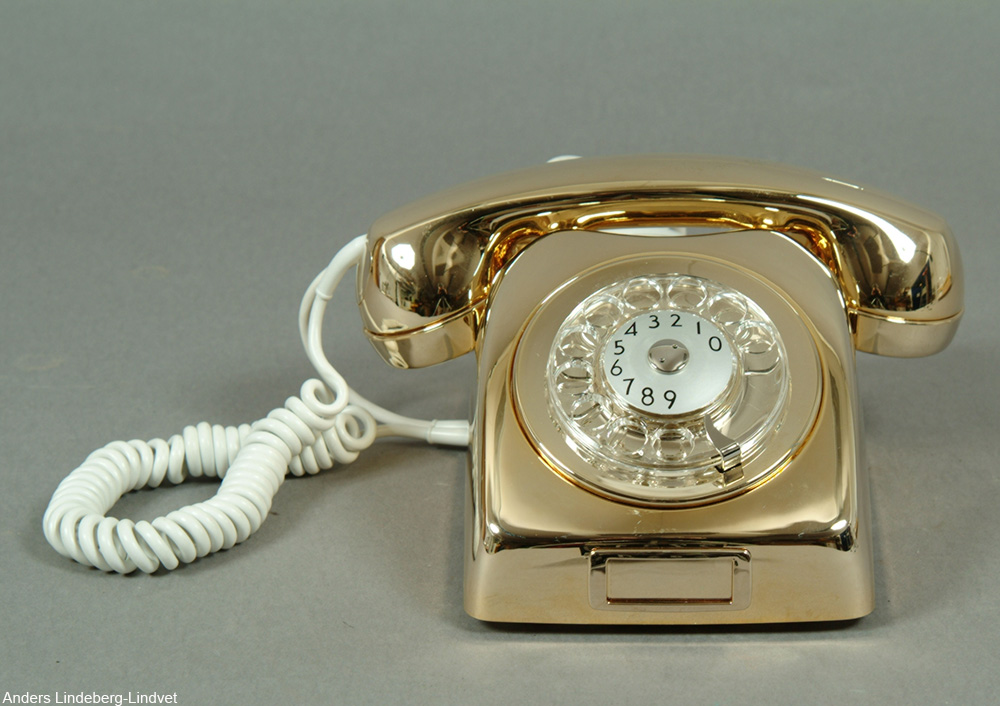 The gold rotary phone above looks like something you might at Graceland. Note the card holder on the front bottom for the phone number of the household to be placed into- particularly helpful when you moved and had to get a new number. 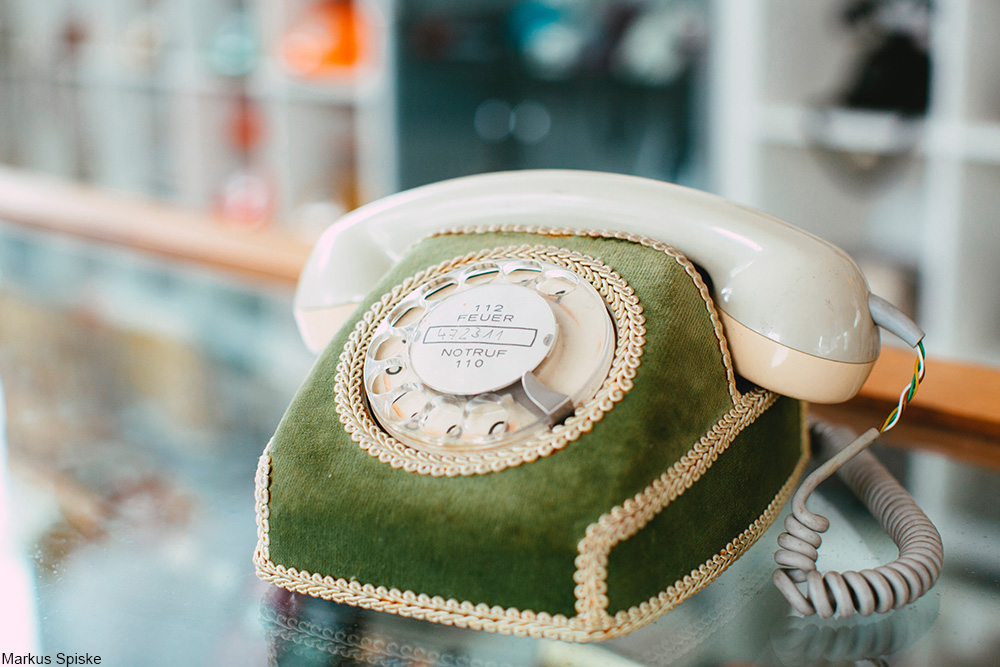 For the connoisseur of telephones, one could have a little cover made for them. This one from the 1970s features moss green velvet and a gold gimp soutache trim around the edges. 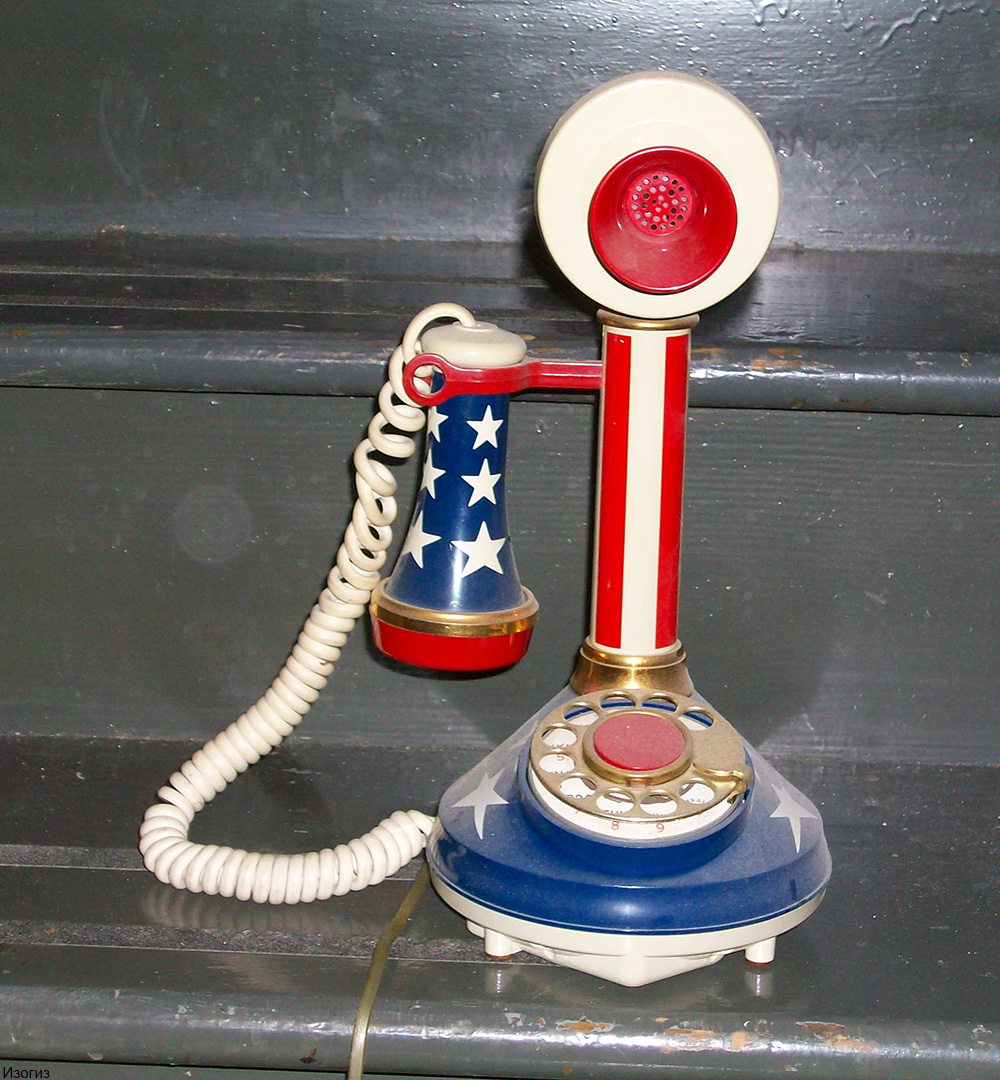 During the 1970s a rash of stars and stripes consumer goods were created in honor of the American Bicentennial, like this red, white, and blue plastic candlestick phone. 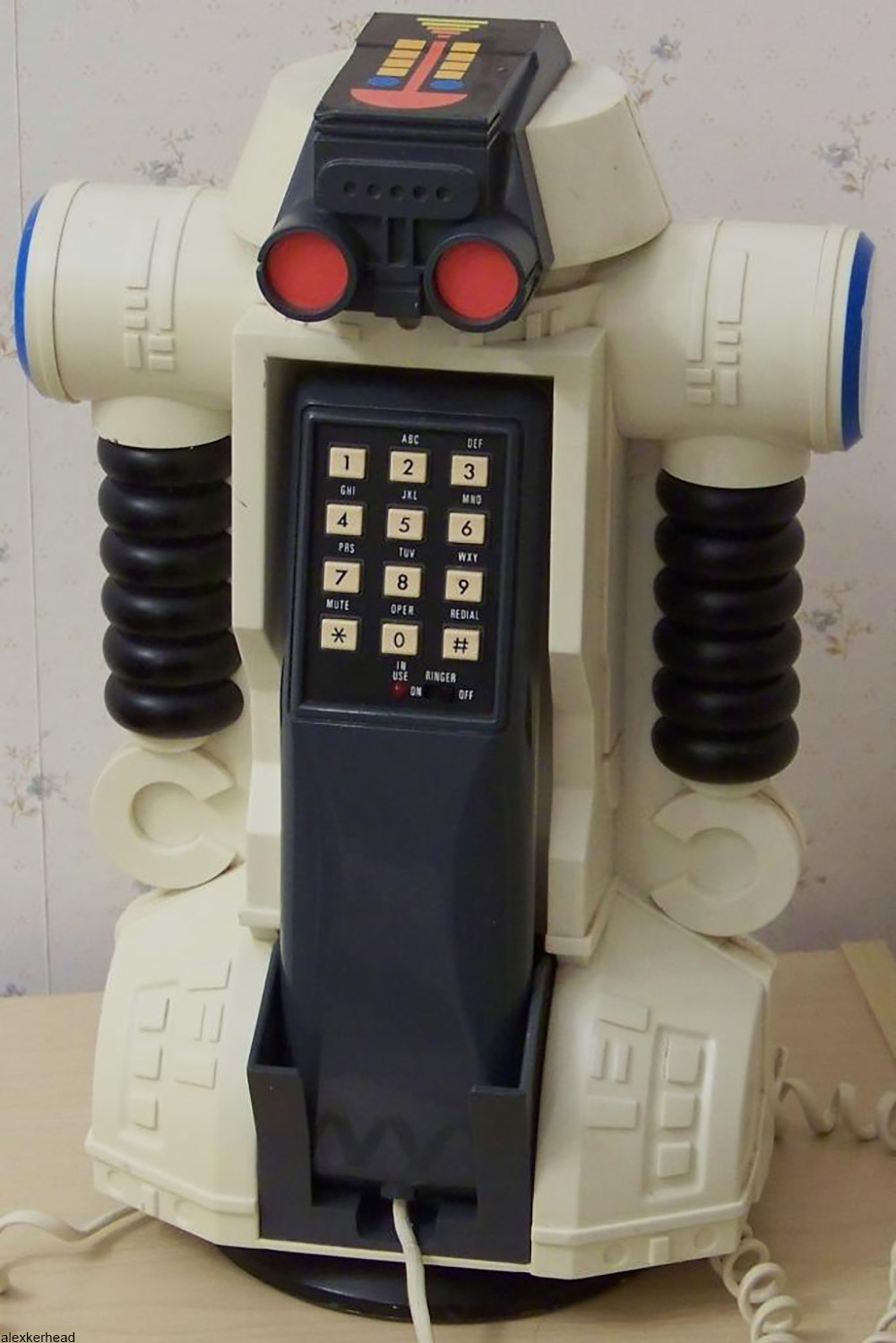 By the 1980s the novelty phone was coming into its own, facilitated in the U.S. by the break up of Ma Bell and a move away from the phone rental system that had been used by so many households for decades. This meant that for the first time customers cold buy a phone- of any design- and plug it into their phone outlet.